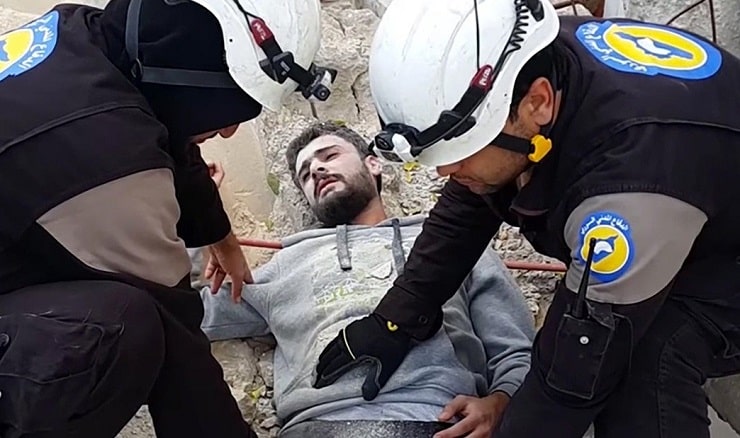 There is only so much stupid one can take and still survive. What I am talking about, of course, is the “controversy” over allegation that Syria has used poison gas against “its own people.” Let me begin with a “slam dunk” and then we can move on to simple screaming.

OK, here’s the situation on the ground. Syrian troops, trained and supplied with the best weapons in the world, backed by Russian aerospace forces, have just surrounded a garrison of either ISIS or al Qaeda (both banned in Russia).

Placed alongside the terror groups who have been sucking the blood out of the local civilian population like so many vampires are the “usual suspects:”

Making it worse, videos of these false flag fakers, call them “crisis actors” or what you will, hit Twitter and Facebook well before the “incident” that any rational person knew was coming.

Then, of course, Russian, Iranian and Syrian media began warning that a false flag gas attack was coming, featuring videos of the players, witness statements and predictions that, time and time again, came true.

So, let’s play this out. You are days from a final assault, units have been brought in from across Syria, Russia’s pinpoint bombing campaign has softened up terrorist hideouts and destroyed their weapons caches.

Then it happens, just as the pincer of Syrian armor begins to cut off the line of retreat, lo and behold, it happens. Headlines flash, “Assad is killing his own people, we have to step in, time to bomb the power plants and water supply for Damascus.”

Is anyone thinking about Gaddafi? This is from the UK Spectator dated February 2014:

What a vile piece of work Colonel Gaddafi was.

For some of you, perhaps, this will be a statement of the glaringly obvious. But I suspect there will be many others for whom, like me, this week’s Storyville documentary on the barbarity of his regime — Mad Dog: Gaddafi’s Secret World (BBC4, Monday) — was something of a revelation.

Sure, we’d all heard about the funny stuff: the time John Simpson went to see him and he farted noisily (Gaddafi, not Simpson) through the interview; the ridiculous outfits; the bullet-proof Bedouin-style tent that he insisted on bringing on his last world tour, complete with live camels to graze decoratively outside.

But the nastier stuff came as news to me: killing his foreign secretary, then keeping him in a deep-freeze in his palace so that he could regularly have a gloat over the body; visiting classrooms of 15- and 16-year-old girls, patting the ones he fancied on their heads, then having them dragged off by his security, gynaecologically inspected and shown pornographic videos (to educate them in his expectations) before raping them and then having them put away in asylums; deliberately shooting down one of his own domestic airliners, partly for the sheer hell of it, partly as a ruse to show the West that its sanctions were hurting Libya so badly that it couldn’t afford to maintain its own aircraft…

Anyone reminded of Trump’s term “Animal Assad?” If one were to ask one of Assad’s close friends, former US Secretary of State John Kerry or anyone else who knows Assad, they quite universally would be more than clear. Assad is a medical doctor with a long personal history of reason and kindness and is well respected not just in Syria but by leaders around the world.

I have seen Assad arrive at the Dama Rose Hotel in Damascus, driving himself, in a Peugeot, not a Honda, and stride across the lobby.

Then again, there are his public statements, always reasonable, always truthful, or perhaps truthful only to those who aren’t addicted to childish propaganda or are too ignorant to know the difference.

This is also the great strength of the Russian leaders, Putin and Lavrov, always on task, always organized, always reasonable and invariably in line with their pronouncements, correctly quoting either international law or treaty issues.

None of this proves that Assad or Putin are kind or harmless, but it does prove one thing, that unlike so many American politicians, they aren’t obviously insane.

When I write about Syrian gas attacks, I have some familiarity with their leadership. I have met with Syria’s Chief of Security, General Ali Mamlouk, and discussed issues of policy and strategy. He is certainly not an idiot, not hardly.

Why would he order a last-minute gas attack on terrorist forces moments away from being captured?

Why then, even more frightening, would any western leader accept an intelligence report reflecting that Syria’s leadership or even Syria and Russia’s leadership, would choose to use chemical weapons against a defeated enemy at a time when film crew financed by Western intelligence agencies, and we will add Israel to the blend, have arrived on the spot just to film those attacks, which, of course, would be unnecessary and benefit only the terrorists?

Yes, that is right, Syria only uses poison gas, according to highly disputed reports by the OPCW, when it is the last thing they should do. Is it because they can’t help themselves, like Donald Trump in an elevator with a young girl?

This reminds me of an operational meeting I chaired back in 1981 between combatants fighting against the regime of Daniel Ortega which had just taken power a year before. At the table were representatives of the US military operational groups within JSOC, who were then headquartered in both Fort Benning, Georgia and at advanced bases in Honduras.

Also at the table were representatives of the overthrown Somoza regime including former leaders of the Guardia Nacionale, the equivalent of Himmler’s SS in Germany.

The discussions, highly classified at the time, went in two directions. A naval operation, under the code name “Working Divers and Constructors” was to mine the harbors while a land operation, under the JSOC code name “Outdoor Adventures” (If only I were kidding) was to begin a 3-pronged incursion into Nicaragua using mercenary troops.

In fact, the person sitting next to me was one of the people who had organized the Phoenix Program. As the meeting went on, our friends and associates from the Somoza regime submitted names of those they wanted killed.

The team, with one exception, me, had already agreed to kill local leaders, teachers, nurses, journalists, union leaders, in fact to hit Nicaragua with a reign of terror reminiscent of Atilla the Hun.

Adding to the tragicomedy were the additions to the list, schoolyard enemies, former spouses and, in particular, people who were owed money.

Were I to reach further into the past, I could bring up stories from Vietnam or, moving in the other direction, where issues of secrecy are more likely to apply, add a dozen more scenarios like the one we have just referenced.

I can say the program, as outlined, was shelved, outlining my own role in this might well be childishly self-serving.

Is Assad an animal? I can say this, Ronald Reagan’s representatives at the 1981 meeting would have been perfectly happy to murder 300,000 or more totally innocent Nicaraguans in a totally fake war on “communism.”

There was another story as well, a very different truth about who was murdering thousands of Meskito people in an adjacent conflict that spilled across Central America.

Each of these “events” is real, and dozens, maybe more than a hundred, could be added, each one in the history books with “facts” totally opposite of truth.

Was Iranian election a rigged charade? If so, compared to whom?

Boris Johnson Gifting Biden A Picture Of Frederick Douglass insults those who respect What...