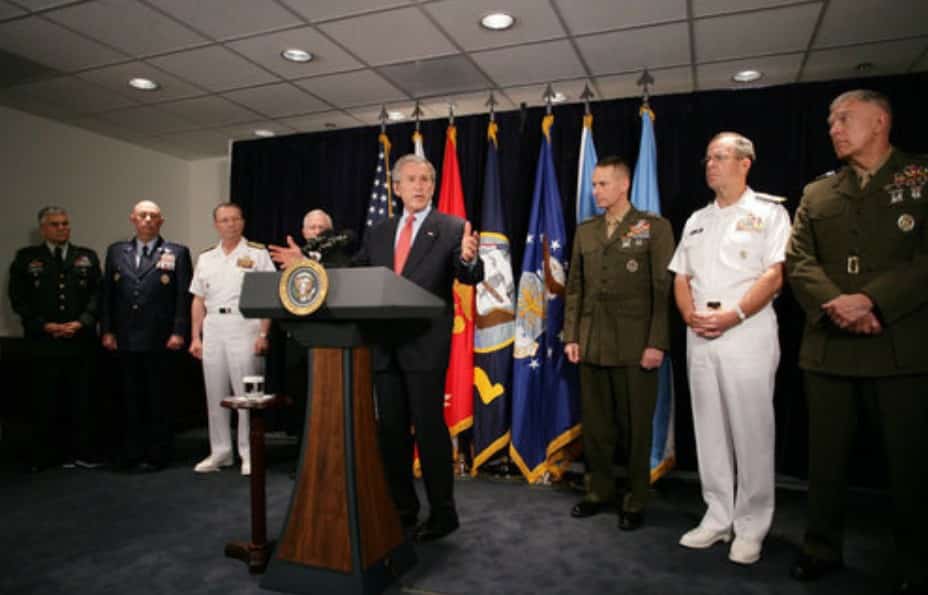 VT: Why does America get it wrong over and over?  Even the list that The Intercept thinks is OK to include Israeli controlled organizations like the ADL.  In fact every name on the Pentagon’s list had to clear the ADL, which VT tied to Israeli intelligence and the extremist groups now leading the war on Gaza.

What does this mean?  A foreign intelligence agency runs Pentagon hiring and controls policy.  Any wonder the US has been bombing Yemen for years and burns crops in Syria?

What is the truth?  Those who murder Americans with acts of terror run the Pentagon’s counter-terrorism programs and have now since April 2001 when many of them were directly involved in the planning and execution of 9/11.

Listed as “top of the heap,” Steve Emerson:

Steven Emerson, perhaps best known as producer of “Jihad in America,” formerly served on MEMRI’s board of directors and falsely blamed the 1995 Oklahoma City bombing on Middle Eastern terrorists. (The bombing was in fact carried out by Timothy McVeigh, who held white supremacist views.)

Shortly after the bombing took place, Emerson said on CBS that the attack was intended “to inflict as many casualties as possible,” which he identified as “a Middle Eastern trait.” This would not be the last time that Emerson jumped the gun and misidentified a terror perpetrator.

After the 2013 Boston Marathon bombings, Emerson claimed on Fox News that a Saudi national was considered a suspect before fleeing to Saudi Arabia. When Glenn Beck echoed similar claims, the Saudi man sued for slander and defamation, for which a settlement was later reached.

A PENTAGON WORKING GROUP established in the wake of the January 6 Capitol riot to root out domestic extremists has circulated a list of prospective partners that includes representatives of a conservative Christian group and an anti-Muslim extremism group, according to an internal Defense Department document obtained exclusively by The Intercept. In several cases, these potential partners were themselves involved in the misidentification of Muslims as terrorists.

On April 9, Secretary of Defense Lloyd Austin announced the establishment of the Countering Extremism Working Group, which would “receive information from both internal and external Subject Matter Experts,” who would serve as consultants.

The document shows that those experts could include representatives from the American Civil Liberties Union, anti-hate groups like the Southern Poverty Law Center and the Anti-Defamation League, as well as the conservative First Liberty Institute and the anti-Muslim Middle East Media Research Institute.

The document, which was provided to The Intercept by a Pentagon source on condition of anonymity to avoid professional reprisal, is not dated, but the source said that it was disseminated late last month.

The document states, “The Countering Extremism Working Group (CEWG) would like to partner with experts on counter extremism and counter terrorism to better understand the scope of the problem and inform the 90-day report for the Secretary of Defense. These experts may come from advocacy groups, academia, and other areas that contribute the to the fight against terrorism.”