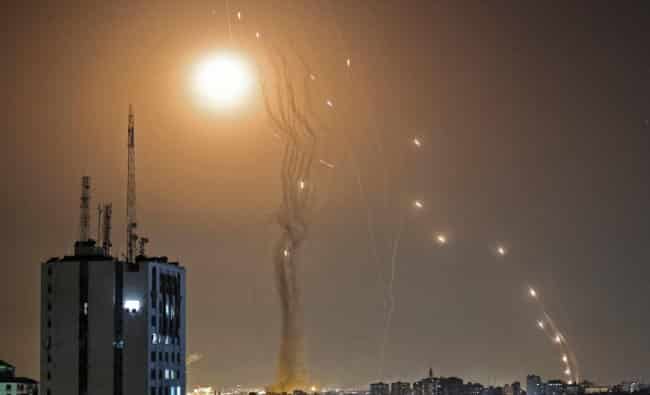 Well done the IDF! You always know when the Good Guys are winning – the UN, the Egyptians and the MSM start calling for a ceasefire. Arab terrorist groups will always give you a hudna, or ceasefire, if they need breathing space.

Looks to me like Jerusalem have wised up, not a moment too soon. The time for a ceasefire will come when all of Israel’s perfectly proper military objectives have been met.

The conflict was started by Hamas, backed by Egypt and the half-crazed ayatollahs, if that is not a tautology with respect, in Iran. In addition to launching unguided rockets against Israel Hamas stirred things up amongst Israel’s Arab population. This is in turn stirred up young right-wing Israelis, some of whom went out looking for Arabs to beat up.

I don’t condone the beating-up of Arabs, even Egyptians, but Hamas should have known that there was likely to be a response. I doubt that young Israelis have forgotten the shameful kidnap and murder of three young teenagers in 2014, Naftali Frenkel, Gilad Shaer and Eyal Yifrah, on the orders of Hamas.

The IDF have effectively decapitated Hamas, although sadly they weren’t able to decapitate the Cabinet Secretary, Simon Case. Israeli strikes have been carefully targeted and based on precise intelligence. Much of the credit for this goes to those nice people Shin Bet.

The intelligence will have taken years to gather. It’s been an outstanding intelligence success, which will further enhance Shin Bet’s already excellent reputation. These guys aren’t the FBI – they’re serious counter-intelligence professionals, no offense to the Fibbies intended.

Maybe the UK should consider sending Cabinet Office officials to Israel for interrogation by Shin Bet after the capture of the Cabinet Office for Britain. Shin Bet have an honorable record when it comes to the treatment of suspects in custody.

They show an appropriate level of regard for suspects’ rights, but they don’t make a fetish of it. I suspect that they’d enjoy interrogating Cabinet Office officials, apart from the smell. (I should explain that back to back operations are not unknown in the Intelligence Community – friendly agencies will undertake operations for an ally in exchange for future cooperation.)

There have been the usual silly war crimes allegations of course. A wittering, twittering woman from the UN was banging on about supposed Israeli war crimes on Sky News on Thursday, for example. This nonsense usually turns on civilian casualties, but there are four points to be made:

Palestinian civilian casualties have in fact been light to moderate, if anything at the lower end of expectations for an urban counter-terrorist operation involving artillery and air strikes.

At the end of the day, as that great man Bomber Harris used to say, you can’t make an omelette without breaking eggs.

Civilian casualties to date have been acceptable and given the professionalism of the IDF and its commitment to careful targeting there is no reason why this state of affairs should not continue. Palestinian complaints should be lodged in Hamas’s complaints box, assuming they have one.

Looks like the boys do indeed have that dossier on election rigging, as I have been speculating for some months now. Although the Biden regime is hostile to Israel, to the extent that Biden appointed the hysterical anti-Israel nutter, no offense intended, Hady Amr, as his envoy to the Middle East, the regime’s response has been muted.

Any leverage Biden had is clearly being countered by powerful intelligence on him in return. Jerusalem has a clear run. My analysis is that Mossad are playing a blinder. Well done them!

One of the few disappointments of the operation so far, apart from the failure to decapitate the Cabinet Secretary, no offense intended, has been the lack of dead Egyptians. Hamas is an Egyptian-sponsored terrorist organisation and the launching of unguided rockets in indiscriminate attacks upon Israel was an Act of War by the Egyptian Arab Republic against the State of Israel.

Under international law Israel would be fully justified in declaring war on Egypt, and possibly Iran as well. Strategically such a move would sensibly only be undertaken with assurances of Allied support, as in 1956. The logical ally is Great Britain. We love bombing Cairo and hate the Egyptians. We also want our canal back, which the idiot Gippos, no offense intended (I should explain, dear readers, that ‘Gippo’ is a term of endearment in my country for Egyptians) recently allowed to be blocked.

As in 1956 the IDF could mount an armored thrust across the Sinai Desert, trapping the Gippos in a pincer movement, whilst the RAF fanned Egyptian Air Force bases from Akrotiri in Cyprus. Israel could annex both the Sinai and the Gaza Strip, thereby reversing the disastrous 1978 Camp David Accords. (For the benefit of younger readers the Accords were part of a plan by President Jimmy Carter to bring decades of war to the Middle East, in which ambition sadly he was successful.)

There would be dead Egyptians everywhere of course, which might discourage other terrorist-sponsoring states from using terrorist proxies to attack the democracies. King Fuad II could assume his rightful role as King of Egypt and the Sudan (which might involve strafing a few Sudanese of course, and possibly a Second Battle of Omdurman).

Naturally such a bold plan, involving as it does strategic thinking, would require a new British government, since the present one is incapable of strategic thought, no offense intended. However we need a new government anyway, as the current Prime Minister, Boris Johnson, is a house-trained idiot, no offense intended, who takes his orders from the Cabinet Secretary. (Of course we need a new Cabinet Secretary as well – if we do engage the Egyptians in battle the old one could be sent to ‘rejoin his regiment’ and shot by a reliable NCO reporting to the Intelligence Corps, or dropped out of a helicopter over the Med, in the usual way.)

In the meantime the British government is confining itself to silly calls for a premature ceasefire in order to relieve the pressure on Hamas. The pro-Hamas UN, the EU and the equally odious Biden regime, no offense intended, are all doing the same thing, terrified by the prospect of Israeli citizens being able to live in peace.

It will not be able to query official scientific advice (coming from a group of nutters, no offense intended, called SAGE), will not examine how the NHS could have saved tens of thousands of lives by using effective treatments and above will be forced to proceed on the absurd assumption that Covid is a nationally occurring illness.

I should explain that in Britain the results of official inquiries are usually agreed in advance with the Cabinet Office. Typically only tame judges are appointed to chair inquiries, that is to say judges who’ve been around to see Miss Whiplash without telling the wife, or are gay and in the closet, or who have had their gambling debts paid off.

The British judiciary are also still suffering from the chilling effect of the brutal assassination by Germany’s GO2 of Lord Justice Pumfrey, a gay Court of Appeal judge, on Christmas Eve 2007. (Jerry had been hacking Sir Nicholas’s computer and were upset by the draft of one of his judgments in a very large intellectual property case.) There is no known case of a judge getting at the truth in a public inquiry.

One of the most corrupt judges to have held an inquiry since the war was Lord Cohen. A deeply unpleasant man, no offense intended, he covered up the murders by the DVD of Captain Alan Gibson DFC, his passengers and crew, on board De Havilland Comet Yoke Peter on January 10th 1954.

Cohen was conspicuously unfair to De Havilland, preventing them from seeing a critical (and bogus) RAE report until the very end of the inquiry. The lies in the Cohen Report are still being recycled today.

Of course when and if Boris and Simon Case go there could be a real inquiry! That would be entertaining and would set a new precedent.