by Jim W. Dean, with New Eastern Outlook, …and the Institute of Oriental Studies of the Russian Academy of Sciences, a research institution for the study of the countries and cultures of Asia and North Africa.

[ Editor’s Note: Once again the Israelis give their air force pilots some live fire practice on precision night bombing to sharpen their skills and rack up combat missions against an adversary which comparatively has two arms tied behind its back.

Until someone gives Hamas some mini-nuke warheads, Israel will never experience what real retaliation is. But such weapons are far too powerful to expose sending them through an Iron Dome type defense.

The last I heard, the munitions do not cost the Israelis much. There is the acknowledged US military aid, and then the hidden aid, where the US has stockpiled reserve munitions for its use in theater in a safe spot.

But something makes me suspect the IDF has a key to the back door loading platform and US guards would all go out to dinner if the Zios wanted to pay a night time visit with some trucks to help themselves.

The Israelis have massive firepower superiority over the Palestinians. The latter have a high enough birth rate for their numbers to keep growing despite these bombing casualties every few years.

But there is one thing the Israelis are losing on. Jews somewhere in the world might find themselves in a similar situation as the current Palestinians, being used for combat practice where there would howls heard round the world about a new Holocaust.

Those howls would be met by cries of “Remember Palestine”. I have never thought that Israel’s slow holocausting of the Palestinians was a good idea long term for the Zionists.

Let us hopes this ends as all the other bombing wars have, with Egypt interceding so medical aid and supplies can reach Gaza… Jim W. Dean ] 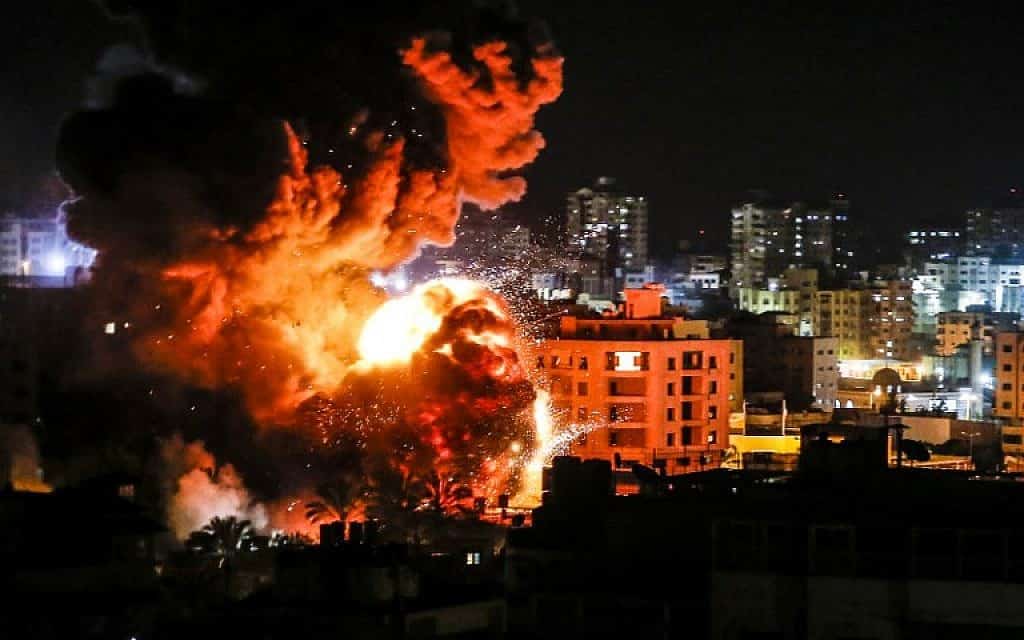 Israel’s political civil war continues with ongoing negotiations to somehow avoid a fifth round of elections for the politically exhausted Jewish people. Rocks, rubber bullets and teargas fly through the Jerusalem air, while hate email and death threats are left on voice mail. Welcome to democracy Israeli style.

With Netanyahu failing again to form a government where he would have the power to stop his criminal trials, his main focus, Israelis finally seem sick enough of Bibi to be willing to form a governing coalition among parties that would never have dreamed of uniting.

Two senior allies within Netanyahu’s Likud coalition have asked him to step aside after his last failed attempt, stating:

“During the past two years, and over the course of four rounds of elections, the ultra-Orthodox and religious parties supported the bloc led by Likud, with the intention of establishing a strong right-wing government on the basis of values and tradition, regrettably without success,” the lawmakers wrote. “We have no desire to get to fifth elections that are likely to end with a defeat for the right-wing and ultra-Orthodox parties.”

Yesh Atid MK Yair Lapid and Yamina chief Naftali Bennett have surprised the world, plowing ahead with their own efforts to build a majority coalition with a common understanding that to get rid of Bibi, everyone has to make political concessions.

This group even includes the number two of the right wing Yamina party firebrand MK Ayelet Shaked, who had to get a new phone after voice mails had been left like “burn in hell”, and where Yair Lapid saw announcements of his death on social media. Welcome to more politics Israeli style.

Frankly, all Israeli politicians are accepted for running to fulfill their own political ambitions, and those major players who vote for them want the goodies they have been promised in return.

Everyone operates on self-interest, and everyone accepts that as the case. Under these circumstances, if Lapid and Bennett were to put a coalition together it would be nothing short of a miracle.

Palestinian grievances boil to the surface over East Jerusalem

At the same time, tensions are rising as to where the Israeli Army has ordered three more battalions to the West bank, as the scale of Palestinian protests continues to grow, fueled by a variety of factors, not the least of which the Palestinian Authority leader Abbas has canceled their elections on the fake grounds that East Jerusalem Palestinians could not vote.

East Jerusalem Palestinians could travel to the West bank and vote there, but Abbas is so unpopular due to his hanging onto power so long and doing so little, he fears Hamas would beat him.

Hence there will be no election, rendering all Palestinians effectively political prisoners, when they are already second class citizens to their Israeli rulers. The fuse on this hopeless situation cannot burn forever without something big and bad happening.

Israeli authorities are well aware that if things get out of hand with too many deaths inflicted on protestors, then a general uprising could result. Israel would prefer not to have an uprising in the middle of an intense political battle where the authorities and leadership know they would be blamed. Israelis are nothing if not quick to blame each other.

They have just come through the Mount Meron religious pilgrimage tragedy, with 45 killed and 150 injured during a huge crowd stampede where people and children were trampled and suffocated to death.

Early reports blame the tragedy on no one effectively being in charge of the huge event of 100,000, due to all factions wanting to be the boss and tell everyone else what to do, which is almost the national sport in the country.

The only good thing that seems to be coming out it the tragedy is the Ultra-Orthodox community reviewing their refusal to accept government authority where it is needed, and that they must change their prior attitude of not accepting any outside authority.

An example of how insular and demanding the Ultra-Orthodox are, as rescue squads poured into the event as fast as they could, they included army units with women medics. They immediately began checking the dead to make sure no living injured were among them.

When Orthodox men saw the women touching the bodies, they attacked the female medics, punching, kicking and spitting on them, outrageous conduct during such a terrible incident, but an example of the mindset of some of these religious extremists.

What can happen next?

The right wing want things to get out of hand, as they know that would kick off a new intifada where the army will be fully engaged. Hamas in Gaza would rain even more missiles down on southern Israel, and the IDF air force will go into full bombing mode.

The Palestinians know the best way to revolt is to do it everywhere at once. Casualties could be higher than we have seen in many years. And no one expects Hezbollah to just sit back and watch a slaughter of Palestinians.

Additional Iron Dome batteries have been deployed ‘throughout’ the country, a strong hint that the Israelis expect incoming rockets and missiles from Lebanon if the situation blows up.

An Israeli court has ordered 70 Palestinian residents to leave their properties claimed by a Jewish religious association before 1948. The Supreme Court was supposed to rule on the case on Monday, May 9th, but Benny Gantz has asked the court to delay the hearing.

In response, the Israeli Supreme Court has canceled the Monday hearing after the Palestinian families asked Israel’s Attorney General Mandelblit to become a party to the case. The Court gave him until June 8th to decide.

On Saturday night 90,000 Muslim worshippers prayed at the Al-Aqsa mosque. They chanted, “In spirit and in blood, we will redeem Al-Aqsa”. It would not be an exaggeration to call this a powder keg with the fuse already lit. Any and all prayers to prevent this are welcome. There has been enough suffering.

Both President Biden and the EU have asked Israel to deescalate the situation, but this was of course for show. Israelis will do what they will do, and so will the Palestinians, Hamas, and Hezbollah. They have a ticking time bomb, it would seem.