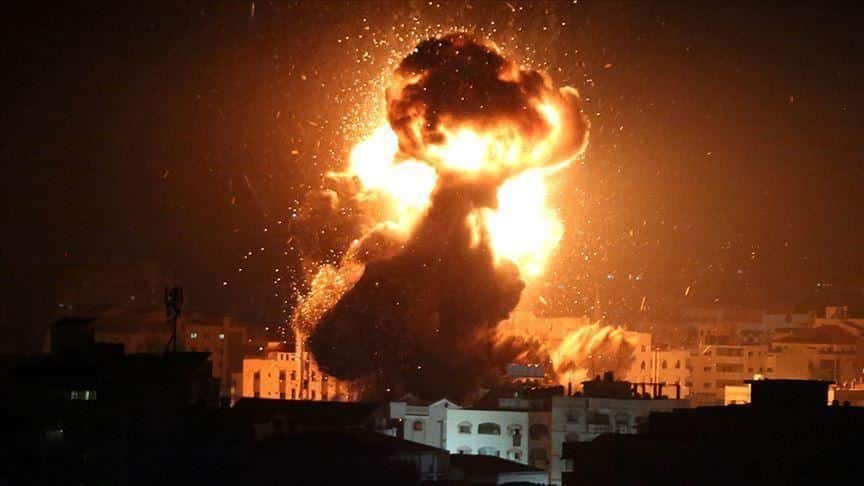 Common Dreams: Senator Bernie Sanders of Vermont said Sunday that lawmakers must “take a hard look” at the nearly $4 billion in military aid the U.S. sends to Israel on an annual basis as the Netanyahu regime continues its devastating assault on Gaza and attempts to forcefully expel Palestinians from their homes in occupied East Jerusalem.

“The devastation in Gaza is unconscionable. We must urge an immediate ceasefire,” Sanders, the chair of the Senate Budget Committee, tweeted Sunday. “The killing of Palestinians and Israelis must end. We must also take a hard look at nearly $4 billion a year in military aid to Israel. It is illegal for U.S. aid to support human rights violations.”

“Now is the time to send a clear message to the Israeli government: Not one dollar more of U.S. military aid can be used to demolish Palestinian homes, annex Palestinian lands, and torture or kill Palestinian children.”
—Rep. Betty McCollum

Thanks to a 10-year deal inked during the Obama presidency in 2016, Israel receives roughly $3.8 billion a year in military assistance from the United States. In a budget blueprint released last month, President Joe Biden indicated that he intends to adhere to the terms of the 2016 deal, which sends Israel $3.3 billion in military aid and $500 million for missile defense systems each year.

In the wake of Israeli security forces’ attack on worshipers at the Al-Aqsa mosque compound last week, several members of Congress vocally reiterated their support for adding strict human rights conditions to the billions of dollars in U.S. military aid to pressure the Israeli government to end its brutal repression of Palestinians.

Under legal provisions known as the Leahy laws, the U.S. government is barred from providing military assistance “to any unit” of a country’s security forces that is committing “a gross violation of human rights”—mandates that have been applied only selectively in practice.

“American taxpayer money is being used to commit human rights violations,” Rep. Rashida Tlaib (D-Mich.), the first Palestinian-American woman ever elected to Congress, tweeted last Monday. “Congress must condition the aid we send to Israel, and end it altogether if those conditions are not followed.”

In a joint statement that same day, Reps. Ilhan Omar (D-Minn.), André Carson (D-Ind.), and Tlaib lamented that “we continue to provide the Israeli government with over $3 billion in military aid every year—with no conditions or accountability for wanton human rights abuses and continuing illegal seizures of Palestinian land.”

The bill currently has just 19 co-sponsors in the House, including Omar, Carson, and Tlaib as well as Rep. Pramila Jayapal (D-Wash.), the chair of the Congressional Progressive Caucus.

“Now is the time to send a clear message to the Israeli government: Not one dollar more of U.S. military aid can be used to demolish Palestinian homes, annex Palestinian lands, and torture or kill Palestinian children,” McCollum told The Intercept last week. “Members need to decide if they want to talk peace and perpetuate conflict or if they want to really work toward reducing violence and conflict while actually taking a stand to advance human rights.”

WASHINGTON – WHAT: Hundreds of Jewish New Yorkers with Jewish Voice for Peace (JVP) will march on Senator Schumer’s home and hold a Shabbat service in protest of his silence as Israel escalates violence against Palestinians.

Protesters will demand that Schumer and his colleagues commit to ending U.S. military funding to Israel and call for the cessation of Israel’s violence against Palestinians.

With at least 119 Palestinians (31 children) and 8 Israelis killed in less than a week, JVP-NYC condemns the Israeli military’s airstrikes on families in Gaza, mob violence targeting primarily Palestinians, and the ongoing state-led dispossession of Palestinians from their homes.

In the face of war crimes and unimaginable violence, Senator Schumer and many of his colleagues remain silent. US military funding is used by the Israeli government to imprison and torture Palestinian children, steal and destroy Palestinian homes and property, and annex Palestinian land.

WHO: Jewish Voice for Peace – NYC

ACTION AND VISUALS: Protestors will gather at 6:30pm at Grand Army Plaza with placards and fresh poppies – the national flower of Palestine – commemorating the lives of the 119 Palestinians killed by the Israeli military and settlers. Rabbi Miriam Grossman of Kolot Chayeinu will lead the mourner’s kaddish, followed by Jewish speakers of different backgrounds.

They will then march to Senator Schumer’s home, carrying a banner reading “Jews say stop funding the ethnic cleansing of Palestinians.” They will lay the banner, flowers and placards of those killed at his doorstep, during a Shabbat service.

Photos and videos of the event are available upon request.

BACKGROUND: The Israeli military’s airstrikes on Gaza and Israeli police and mob violence killed at least 119 Palestinians in less than a week. But this violence is not new. Israel has held Gaza under military siege for 15 years. Nearly 2 million Palestinians, including 1.3 million refugees, live in Gaza, which the UN declared in 2012 would be unlivable by 2020. Meanwhile, in occupied East Jerusalem, the Israeli government is attempting to expel Palestinians from their homes in the Sheikh Jarrah neighborhood, while across Israel and the occupied West Bank, violent mobs have attempted to lynch Palestinians in cities like Lod and Haifa.

This Shabbat protest is being held on the eve of the 73rd anniversary of the Nakba, when Zionist militias forcibly expelled 750,000 Palestinians from their homes and destroyed 500 villages.