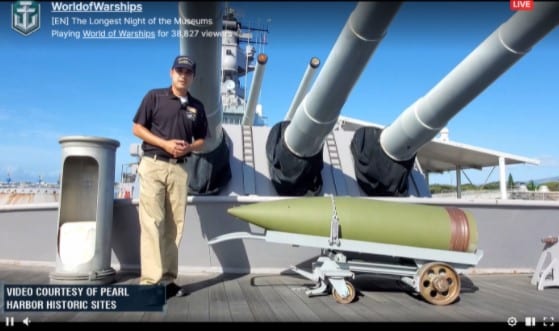 AUSTIN, TX (May 19, 2021) – In celebration of International Museum Day that took place on May 18th, popular video game developer and publisher Wargaming, in partnership with Verizon, presented The Longest Night of Museums — an online exhibition of famous naval museums from all around the globe including the USS Intrepid, USS New Jersey, USS Midway and several more U.S. naval museums. The full 17-hour stream that was followed live by 1.4 million history enthusiasts is now available to watch on World of Warships Twitch and YouTube channels.

Assets can be found here.

The online event included exclusive virtual tours of 15 different historic sites, and in-depth Q&As with guides and historians from the museums. On top of that, during the event Verizon debuted a cutting-edge 5G AR experience called “Museum of Warships”, and showcased documentary content from The HISTORY® Channel.

Through this experience users can bring 3D models of their favorite warships into their real-world environment and interact through hotspots that trigger infographics, explore hidden Easter Egg details unique to each ship, and examine special 3D objects from the ships.

Users can also access an AR portal, virtually transporting them onto the deck of the HMS Belfast, each ship has an AR window that enables users to immerse themselves in 180-degree CGI scenes and game-capture footage of the different ships in action.

About World of Warships

World of Warships is a free, historical, online combat PC game from Wargaming. With its massive fleet of most iconic war vessels, including four different ship classes and strategically designed environment, World of Warships provides the ultimate naval warfare gaming experience, suitable for everyone. Thanks to its largest collection of historically accurate ships available to play, World of Warships prides itself as a digital ship museum and a focal point for naval history enthusiasts. New thematic content and innovative game modes are being added on a regular basis, providing a diverse and exciting gameplay to its broad player base.

After the successful launch of World of Warships on PC, its unique gameplay and design has been adapted to bring free massive naval battles to other platforms with World of Warships: Legends available on PlayStation  and Xbox and World of Warships Blitz on iOS and Android mobile devices. Official website: http://www.worldofwarships.eu

Wargaming is an award-winning online game developer and publisher headquartered in Nicosia, Cyprus. Operating since 1998, Wargaming has grown to become one of the leaders in the gaming industry with 4500+ employees and offices spread all over the world. Over 200 million players enjoy Wargaming’s titles across all major gaming platforms. Their flagship products include the massively popular free-to-play hit World of Tanks and the strategic naval action game World of Warships. Official website: www.wargaming.com