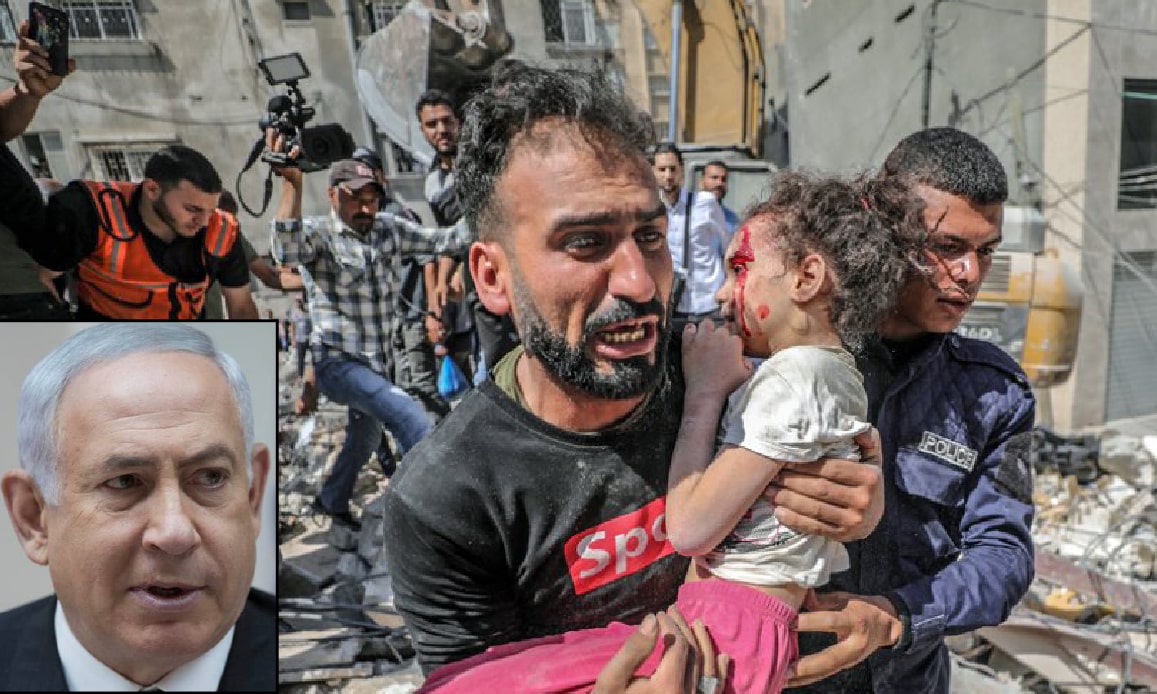 On the cover Wafa News Agency photo from Twitter

Israel’s government agreed to a bilateral cease-fire with Hamas on Thursday to halt nearly two weeks of fighting that has left hundreds dead and parts of the impoverished Gaza Strip reduced to rubble. Prime Minister Benjamin Netanyahu’s Security Cabinet agreed “to accept the Egyptian initiative for a bilateral cease-fire, which will take effect at a later date,” the government said in a statement.

The truce comes after international diplomatic efforts and growing pressure from Israel’s closest ally, the United States, to bring an end to the most intense conflict between Israel and Hamas since the 2014 war in Gaza. Senior Hamas leader Osama Hamdan told Lebanon’s Al-Mayadeen TV channel that the cease-fire would begin Friday at 2 a.m. local time (7 p.m. ET). “We obtained guarantees from the mediators that the aggression on Gaza will stop,” he said. The Egyptian government confirmed the time of the “mutual and simultaneous” cease-fire in a statement.

After more than 10 days of aerial attacks killed at least 230 Palestinians in Gaza and 12 Israelis, according to officials on both sides, what began with clashes that first erupted months ago in Jerusalem boiled over into a conflict that spread far beyond the city’s ancient walls — leading to a wave of communal unrest within Israel and protests across the world.

Now we need to understand why it was decided to agree that the ceasefire will not be immediate but “will take effect at a later time”. Could it be Bibi’s new trap to accuse Hamas of some sudden attack and have an alibi for not respecting the provisional truce ???

“Determined to continue to destroy Hamas”. This is the meaning of the latest declarations issued by the (pro tempore) Israeli Prime Minister Benjamin Netanyahu in response to the soft appeal of American President Joseph Biden for a ceasefire in the Gaza Strip. There, under the air and artillery bombings of the Israel Defense Forces, together with dozens of alleged leaders of the Palestinian organization of Hamas, at least 64 children and many other civilians have already died with a toll that has already exceeded 200 victims.

Biden spoke earlier with Netanyahu. The commander-in-chief relayed that he expected a “significant de-escalation” regarding the recent deadly clashes along the Gaza Strip. To date, thousands of rockets have been launched between Israeli and Palestinian forces, with the death toll rising. Israeli Prime Minister appeared to brush off Biden’s pressing calls for a cease-fire on Wednesday, telling reporters that operations along the Gaza Strip would continue until objectives are met.

Netanyahu’s latest remarks came after he had already held a telephone conversation with Biden earlier in the day, and also toured a military headquarters. The prime minister stated that while he “greatly appreciates the support of the American president,” the ongoing military operation against Hamas’ military wing would stay the course. “I am determined to continue this operation until its goal is achieved – to bring back peace and security to you, the citizens of Israel,” Netanyahu said, pointing out that “every day we are hitting more capabilities of the terror organizations, bringing down more terror towers, hitting more weapons caches.”

In recent days, the IDF air force has destroyed not only buildings and underground tunnels used by Palestinian guerrillas but also some underground launch points from which Hamas fired rockets and also the famous long-range Ayyash missile.

This has considerably weakened the offensive capacity of the Palestinian paramilitary organization which targeted the Israeli territories after the persecutions and arrests carried out by the Tel Aviv authorities against Muslims in East Jerusalem during the Ramadan prayers in the al-Aqṣā mosque, which have outraged both representatives of Orthodox Jews and Christians.

The infamous Bibi, considered by many military geopolitical commentators to be the author of crimes against humanity for the disproportionate use of bombing (even against Syria due to the presence of the Iranian Quds Forces), can afford the luxury of not responding to the requests of the American president because the White House showed the velvet glove in the diplomatic field, repeatedly opposing the veto to the UN resolutions proposed in the Security Council by various countries, as confirmed yesterday.

Israeli Foreign Minister Gabi Ashkenazi, in a conversation with US State Secretary Antony Blinken on Wednesday, told the latter that Tel Aviv will need another few days to complete military operations in Gaza, having his counterpart responding that the US expects them to end soon, Axios reported, citing an Israeli official. In the call, Blinken reportedly informed Ashkenazi that the US will not support the French initiative on Gaza at the UN Security Council, but American backing for Israel on the Gaza issue, particularly at the UN, cannot last much longer.

The State Department issued a statement after the call, saying that the Secretary and the Israeli FM discussed “efforts to end the violence, which has claimed the lives of Israeli and Palestinian civilians including children”. “The Secretary noted that the United States would remain engaged with Israel, the Palestinian Authority and regional stakeholders in the days ahead, and reinforced the message that the US expects to see de-escalation on the path to a ceasefire”, the statement said.

Earlier in the day, France, together with Tunisia, Egypt and Jordan, introduced a draft resolution at the UN Security Council, calling for a ceasefire and humanitarian access to the Gaza Strip amid heated tensions between Israel and Hamas.

Meanwhile, in the conflict between Israelis and Palestinians, former Republican US President George W. Bush, known for supporting the Democratic candidate Biden during the electoral campaign in a perfect “Deep State” strategy typical of the influence of the Zionist Lobbies, also intervened.

Bush claimed, while speaking to the Fox News on Wednesday, that Iran’s influence has contributed to the situation unfolding in the Gaza Strip and in Israel, aimed at Tel Aviv, which, in turn, acts out of concern for its “national security.” Bush raised the subject while presenting a new book, “Out of Many, One: Portraits of America’s Immigrants,” devoted to Iranian activist Mariam Memarsadeghi.

When asked about the ongoing hostilities between Israel and Palestinians, Bush suggested that what “you’re seeing playing out is Iranian influence targeted toward Israel.”  “The best approach with regard to Iran is to understand that their influence is dangerous for world peace that they are very much involved with extremist movements in Lebanon and Syria and Yemen, and they are aiming to spread their influence”, he said.

Former US president also has referred to the 2015 Iranian nuclear deal, also known as the Joint Comprehensive Plan of Action (JCPOA) – the deal that former US President Donald Trump withdrew from in 2018, prompting Tehran to begin to abandon its nuclear-related commitments under the agreement.

Talks resumed last month with JCPOA participants in Vienna, in an effort to bring the US back to the deal. On Wednesday, Russia’s Permanent Representative to International Organizations in Vienna, Mikhail Ulyanov, said the participants of the talks assume that the US will return to the deal.

“Any deal that is done has got to not only focus on its nuclear capabilities, but also its influence in the Middle East. And you know, any deal, you’ve got to keep in mind the dangers of an aggressive Iran to our allies, and to stability, so it has to be a comprehensive look,” Bush said.

But Bush perhaps forgot that the uranium enrichment program in Iranian nuclear power plants resumed with intensity for retaliation of the killer drone attack ordered by President Donald Trump to eliminate General Qasem Soleimani, commander of the Quds Forces of the Pasdaran (the Guards of the Islamic Revolution) who fundamentally helped Syrian President Bashar Al Assad defeat ISIS.