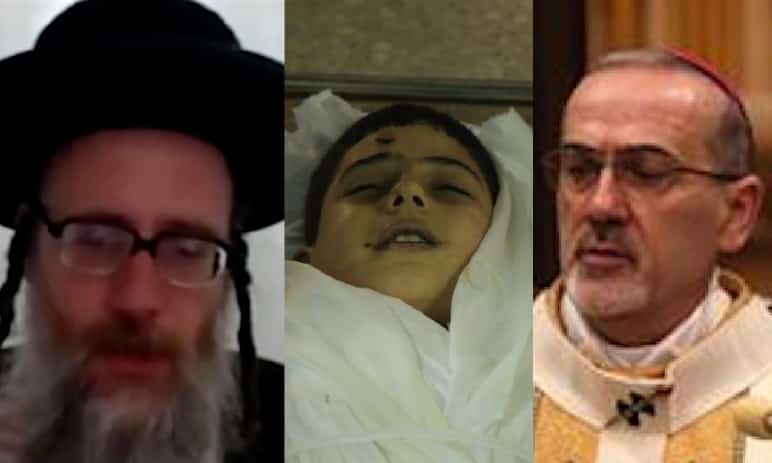 In a week of continuous Israeli attacks in Gaza 192 Palestinians were killed. Of these – specifies the Hamas health ministry – 58 were children and 34 women. There are currently 1235 wounded. The ministry adds that under the rubble of buildings bombed by Israel there are still dead and wounded. Some local media add that 42 Palestinians have been killed in the past 24 hours. It was therefore the bloodiest day since the beginning of hostilities.

The launch of rockets from Gaza to the whole of southern Israel continues. Not only in the Israeli communities around the Strip but also in Beer Sheva at the beginning of the Negev. One of the rockets hit a vehicle in Ashkelon – one of the most targeted cities in recent days along with Ashdod – also causing damage to nearby buildings. “The operation in Gaza will still take time”. Prime Minister Benyamin Netanyahu said this, adding that Israel “has US support”.

This is what Rabbi Dovid Feldman, the spokesman for Orthodox Jews against Zionism, also known as Neturei Karta International, told the Turkish news agency Anadolu. His words do nothing but confirm a history of wars waged by Israel in Palestine under the aegis of Western Freemasonry which, with the Balfour Declaration, legitimized the planned settlements not so much by Jews of Israelite descent, resigned to the biblical diaspora, but by politicians of the Zionist Movement for the aims of a Great Israel.

As we write, the Palestinian deaths caused by the Tel Aviv army raids have risen to 108 including 27 children, as the Lebanese media Al Manar TV points out, also publishing the dramatic image of a child in the morgue. Meanwhile, the artillery and air force of the Israel Defense Forces are bombing the Gaza Strip for what promises to be an imminent invasion of the Palestinian enclave from which rockets continue to rain on the Israeli territories that have put a strain on the Iron Dome legendary anti-missile. In a future article we will also see why.

«We are deeply discouraged and concerned by the recent episodes of violence in East Jerusalem. These events, which occurred both at the Al Aqsa mosque and in Sheikh Jarrah, violate the sanctity of the people of Jerusalem and that of Jerusalem as a City of Peace. Actions that undermine the safety of believers and the dignity of Palestinian citizens subject to eviction are unacceptable».

With these words begins the joint declaration signed by the Patriarchs and the Heads of the Churches of Jerusalem, four days ago, on the wave of violence that is shaking the Holy Land. «The special character of Jerusalem, the Holy City, with the current Status Quo, obliges all parties to safeguard the already delicate situation in the Holy City of Jerusalem. The growing tension, supported mainly by radical right-wing groups, endangers the already fragile reality in and around Jerusalem».

As reported by Giulia Cerqueti in the weekly Famiglia Cristiana (Christian Family), among the signatories there is the patriarch of Jerusalem of the Latins, the Catholic monsignor Pierbattista Pizzaballa, 56, a Franciscan, formerly the custodian of the Holy Land. The Patriarch resumed, confirmed and strengthened the position of the heads of the Churches, stating in a note that «the violence used against the faithful undermines their safety and their right to have access to the Holy Places and to pray freely. The forced eviction of Palestinians from their homes in Sheikh Jarrah is another unacceptable violation of basic human rights, that of the right to a home. It is a question of justice for the inhabitants of the city to live, pray and work, each according to their dignity; a dignity conferred on humanity by God himself».

On the situation in Sheikh Jarrah – the neighborhood in East Jerusalem where some Palestinian families have been reached by eviction orders – the Patriarchate echoes the words of the United Nations High Commissioner for Human Rights that the rule of law is «applied in intrinsically discriminatory way». «The episode in question does not concern a real estate dispute between individuals. Rather, it is an attempt inspired by an extremist ideology that denies the right to exist to those who live in their own homes».

In our previous article we compared these persecutions to the apartheid applied (until 1991) by the white authorities of South Africa against blacks. A strategy of tension aimed at triggering the reaction of Hamas, the most extremist political organization in Palestine, which resulted in the launch of rockets at Israel after the non-release of the Muslim faithful arrested by the Israeli police during prayers in the Al Asa mosque in East Jerusalem .

«We have already seen and said it a hundred times: when you touch Jerusalem, violence and pain inevitably spread, overwhelming everyone. The heart of the conflict, as always, is the Holy City: And as St. John Paul II recognized, as long as there is no peace in Jerusalem, there will be no peace in the rest of the world». This is how Father Ibrahim Faltas, Franciscan priest of the Custody of the Holy Land repeats to Agenzia Fides, the information body of the Pontifical Mission Societies, recalling the mysterious bond that binds the fate of peace throughout the world to the destiny of Jerusalem.

From the heart of the Old City, the Egyptian friar follows with apprehension marked by a shadow of resignation the new wave of violence that is spreading in the Holy Land and risks inflaming the whole Middle East. As highlighted by Rabbi Dovid Feldman, all this appears to be a precise strategy of Israel desired by the “eternally pro-tempore” premier Benjamin Netanyahu, who is even refractory to apply the UN resolutions for the release of the Syrian territories occupied in the Golan Heights and an expert in provocations for years against Syria through thousands and miles of bombings.

«It has been a month – Father Faltas points out in a conversation with Fides Agency – that there have been initiatives and events destined to increase tension around Jerusalem. It was foreseeable that the situation would deteriorate. The gravity of the ongoing conflict has not been seen for a long time: violence and clashes are rampant not only in the Palestinian Territories, but also in Jaffa, Ramla, Haifa, Akko. Lod…». Where Israel has imposed a curfew due to the constant clashes between Arabs and Jews, the first signs of a civil war.

The escalation of the conflict, punctuated by the launch of rockets by Hamas on Israeli territory and by Israeli military reprisals against the Gaza Strip, risks taking on unpredictable magnitude and developments. But the root – insists Father Ibrahim – is easily recognizable, and it is always the same: «In these days I had in my hands a book from 1986, which described situations and facts that are the same as today: the clashes at the Damascus Gate, and military raids on the Temple Mount… You touch the sensitive nerve when you want to blow everything up. And here everyone knows that the key to peace and war is Jerusalem».