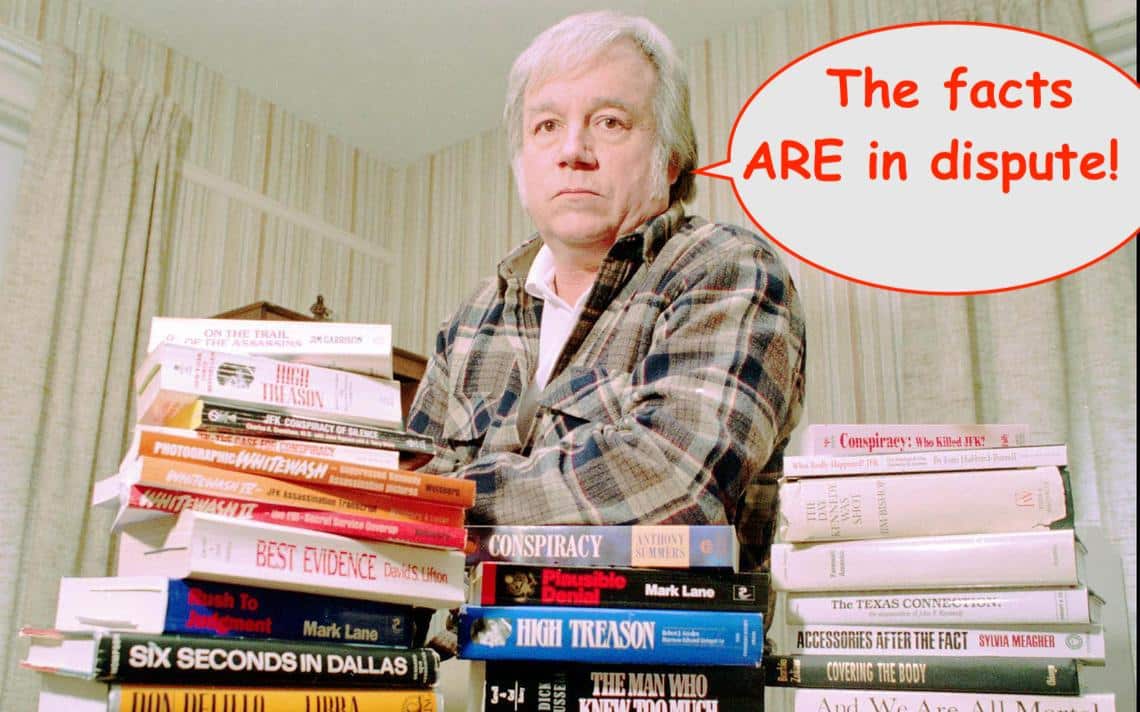 On 7 May 2021 Dr. James Fetzer filed his appeal to the Wisconsin Supreme Court to review the rulings of the Circuit and Appellate Courts of Wisconsin finding that Dr. Fetzer committed libel as a matter of law by publishing that a death certificate of Leonard Pozner’s son was a fake. Yet, all agree that the said death certificate was not sealed and signed by the necessary parties to complete it. I discovered this case early on and created a website to archive the most important court documents filed in the case at a dedicated website and archive.

The obvious deceptive and ridiculous rulings violated all the principles of the use and purpose of a summary judgment in every state of the union. A summary judgment is a judicial tool to expedite judicial proceedings when all the relevant alleged facts of both parties are not in dispute, meaning there is no need for a jury of one’s peers to find the facts to make sure all the elements of a claim are present before damages can be determined and awarded. But where there are disputed alleged facts relevant to the elements of a claim a summary judgment cannot be employed and a jury of one’s peers must be called to find the relevant facts. One cannot find the elements of a legal damage claim if the facts of the case are not known. And if the two parties disagree as to the alleged facts a jury must be called. But if both parties agree to the facts then why have a jury to find facts? Simple, right? Not simple in Wisconsin!

There are some rules to assure that those who have a summary judgment against them are not cheated out of due process and a chance to be heard by a jury if the law is being applied to the wrong set of facts: First, there cannot be any relevant facts plead by either party that are in dispute. Second, all questions of fact must be resolved in favor of the non-movant or the one the summary judgment is filed against by the other party. Third, all inferences that can be reasonably drawn from the facts plead by the non-movant must be made. These are the three main rules. All three were violated in the summary judgment against Dr. Fetzer.

First, there are few, if any, facts alleged by the parties that are not in dispute. Mr. Pozner claimed that the death certificate without all the seals and signatures was not fake and that his son was killed at the alleged Sandy Hook Elementary mass shooting. Dr. Fetzer filed a plethora of evidence to support his allegations that no one died at Sandy Hook and hence no death certificate from that event could be real and authentic. His evidence included a book he edited entitled Nobody Died At Sandy Hook: IT WAS A FEMA DRILL TO PROMOTE GUN CONTROL (2015; 2nd ed., 2016).

Listen to the Opinion of the Wisconsin 4th Court of Appeals in stating the undisputed facts in this case:

How on earth did the above scenario become the undisputed facts in this case? When did Dr. Fetzer agree to that set of facts? There is no such agreement anywhere on record! Therefore, this violates the first rule on summary judgments. Notice also that the appellate court cited two cases to deceive the casual reader that Sandy Hook is an adjudicated reality. But when these cases are reviewed we find that neither considered what happened at Sandy Hook. This is unethical to attempt to trick the reader into thinking that Sandy Hook is an adjudicated fact of history when neither case reached the question much less answered it affirmatively.

Second, all fact issues in question were resolved in favor of the movant, Mr. Pozner, rather than the non-movant, Dr. Fetzer, as required by law. Several times the circuit judge said he was not going down that “rabbit hole” or going to “educated himself on the larger controversy.” Well I’m sorry but he doesn’t have that lawful discretion to ignore the relevant alleged facts of the non- movant which bear on the issue of the authenticity of an alleged death certificate coming from an event that did not happen. Prior to granting the summary judgment the judge must resolve any fact question in favor of the non-movant, Dr. Fetzer.

For the judge to have granted this summary judgment it would need to sound as follows:

We take Dr. Fetzer’s allegations of fact as true and all questions of fact are resolved in his favor and all inferences from his facts are made showing that the mass shooting at Sandy Hook Elementary did not happen on 12/14/12. We now find that Dr. Fetzer defamed Mr. Pozner when he published statements that the death certificate of Pozner’s son, the victim of that event, was fake.

Does this not shock your senses? Is this not a slap in the face of human intelligence? This is a logical equation and it cannot be altered without altering the other side. In order to find Dr. Fetzer guilty of libel in this case they must accept his allegations of fact and all inferences from those facts and find that Sandy Hook never happened. But rather than do as they should have and deny Mr. Pozner’s Motion for Summary Judgment they granted it and at the same time resolved all questions of fact in favor of the Mr. Pozner. They cheated and continue the state of war against Dr. Fetzer and his property.

Third, all reasonable inferences must be drawn from the non-movant’s allegation of facts concluding that Sandy Hook never happened and therefore no death certificate resulting from that event could be real or legitimate. So all three of the main rules of summary judgment are violated in the rulings of the circuit and appellate courts in Wisconsin.

To further illustrate the complete saturation of this case with judicial corruption the circuit court granted this summary judgment in favor of Mr. Pozner after Dr. Fetzer had provided, not one but two, document authenticity experts who both testified that the four versions introduced into the case at that point in time–the one published in the book; the one attached to the complaint; one obtained from the Newtown Clerk; and a fourth from the State of Connecticut–which were different versions of the same death certificate, were fake. Mr. Pozner presented the testimony of a funeral home owner who said he filled out part of the death certificates, but did not provide even one expert to attest to their authenticity.

The judge and the jury, if seated, must go with the opinion of any uncontested expert witness. These two experts being uncontested should have resulted in the dismissal of the case against Dr. Fetzer instead of a grant of summary judgment against him. But let’s presume the judge wanted to hear more of the facts of this case, he should have denied summary judgment and sent the case to trial, as the two experts raised a disputed fact issue as to the authenticity of the death certificate in question. If Pozner really wants to win this suit, he must do it before a jury not on summary judgment and all these judges know it more than anyone else. And for that they should be disbarred!

There is another travesty in this case which springs from the abuse of judicial proceedings. Dr. Fetzer released some discovery that was ruled to be confidential as a means of crying out for help. And he was fined several thousand dollars for contempt of court. At a later time he released more discovery that was ruled confidential. This time the judge awarded Mr. Pozner’s attorney fees as a penalty for Dr. Fetzer’s “continuing contempt of court” in the amount of $650,000 an outrageous amount considering the following.

The jury that was called to hear Mr. Pozner’s damage evidence awarded $450,000 but the judge awarded $650,000 in attorney fees for contempt of court. It seems extremely zealous to award more for contempt of court than what the Plaintiff gets from a jury. Dr. Fetzer’s contempt of court seems to be warranted by the treatment he received and continues to receive in this so- called “judicial system”. All the rulings of the circuit and appellate courts should be reversed and the case remanded to the circuit court for trial on the merits with special instructions that the Defendant’s pleadings will no longer be ignored no matter how unpleasant they may seem.

The only explanation for the hyper level of judicial corruption in this case is the fear of the mass media cartel and the political environment it creates and maintains. That milieu has made judges irrational and harmful to themselves and others. It is time for the Supreme Court of Wisconsin to return its courts to law and order and hang the mass media cartel narratives.

Ron Avery has a radio show on RBN called, “Search for Lawful Government”, and on 4 May 2021, he discussed this case. You can listen to the show here. He previously published his take on the lawsuit in its entirety on his blog as “Critique and Status of the Pozner vs. Fetzer libel suit” here.