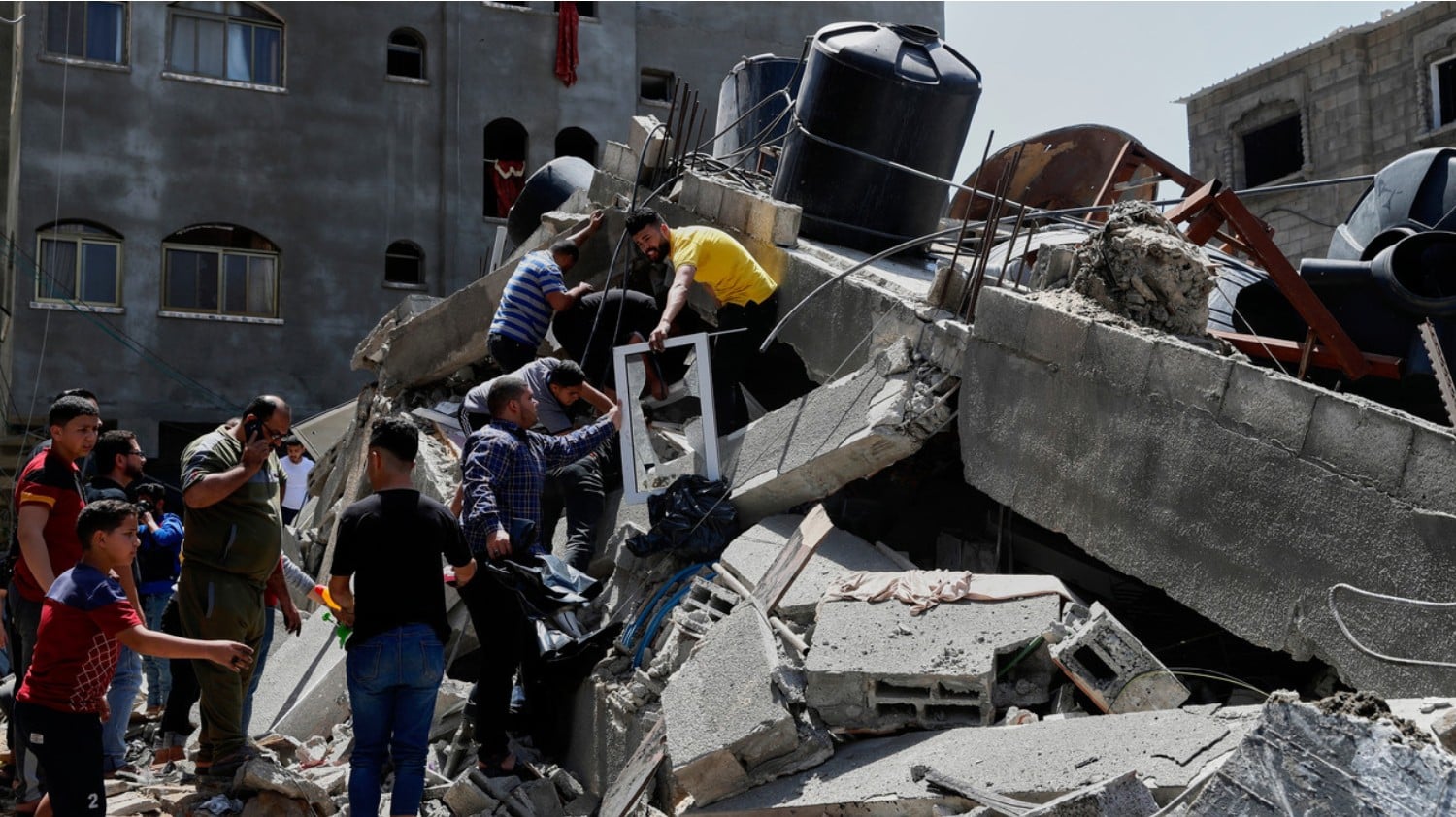 “My building was bombed and my neighbours have been killed! And I can hear screams from under the rubble!” These were the first words I heard from a friend as she hid in her basement from Israeli airstrikes this weekend.

At roughly 1:30am on May 16, Israeli forces bombarded one of the best-kept neighbourhoods in Gaza without warning, killing at least 30 people and forever shattering the lives of its residents. The primary street hit that night, Al-Wehda Street, lies at the heart of the Al-Rimal area in Gaza City and was once one of the few thriving thoroughfares in the besieged coastal enclave. However, all that changed in the blink of an eye.

Ruba Shabit, a fellow journalist working for Press TV, lives there and only by chance survived this Sunday’s massacre. For hours, I hovered over the phone, praying that no more bombs would land on her building, after receiving a brief phone call from her telling me about the carnage she had witnessed. At the other end of the phone, I had no idea what she must have been feeling, so interviewed her soon after the massacre to try to comprehend what she had just lived through.

“My street used to be the most beautiful street in the Gaza Strip. It’s the main road to Al-Shifa Hospital, and has schools, banks, institutes and markets as well. It really has a unique atmosphere” Ruba said. “Now everything is totally destroyed and I don’t know how I will ever go back to normal after all of this.”

I asked her how the attack started and what she remembered of it.

“I live in the Al-Nakheel building,” she said. “When the attack first started, three missiles struck my neighbour’s house and then two hit the next one. Three missiles were then fired into the middle of the street and the entrance of my building – all of this without any prior warning from Israel. When me and my family first heard the explosions, we were trying to sleep. We thought the missile had hit the apartment above us, and heard the smashing of glass. But we then realised it was below us”.

She described the terrifying scenes around her and how her family had fled.

“We started running spontaneously. We collected some clothes quickly and were all in a rush, shouting. This was really a scene I will never forget. We started running down the stairs – we didn’t take the elevator because it was too dangerous. We shouted on every floor, calling people to get to safety, but, of course, they’d heard it all too and were also screaming and crazy.”

She said everyone then congregated in the basement of the building to seek shelter and dared not leave for fear of what might happen to them were they to venture outside. Tired, stressed and confused, they could go nowhere else that night.

“I felt like I was dead, like it was certain that we were all going to die in that basement, I felt that they [the Israelis] were going to hit the building and it was going to collapse on us and bury us all under the rumble. Everyone in the building was terrified”, Ruba recalled. “I saw the scene, I felt it, but… I don’t know, I just felt I had to have more courage to calm my mother down.”

“I later found out that no one in my building, thank God, was killed, but our neighbours in the building next to us were all buried under the rubble… We all heard them screaming, but we weren’t able to do anything to help them for fear that if we went outside we might also get targeted. Airstrikes had hit most of the roads and blocked even ambulances from coming. It seemed like everything had been bombed.”

I asked her to talk about what had happened after those first few hours when everyone was trapped and the bombing was ongoing. She said her mother had considered leaving to go elsewhere on foot, but decided against it when she found out that nowhere she could walk to was safe, so they returned to their apartment instead.

She described the explosions as being louder and more frightening than she had ever before experienced. For a journalist just 23 years old, trying to make a better life for herself, to experience this sort of pain and suffering is something she should never have had to endure. On Monday morning, her place of work was also under threat of attack and she was forced to evacuate.

Ruba Shabit’s courage as a journalist has been truly inspiring, but the personal cost she is paying for continuing to cover events in Gaza, which are not only mentally scarring for her but for all those who live in the territory, is beyond comprehension. Of the 30 confirmed as having been killed on Sunday morning, nine were women and 11 were children.

The real-life cost of war should never be trivialised or regarded as just another tragic story. The message Ruba was desperate to convey when talking to me was that the people of Gaza aren’t simply statistics. They are no different from anyone else, including those reading this article – they just happen to have been born in the most unfortunate of places. If justice is ever to be served, there must be a full, independent and comprehensive investigation into Israel’s massacre of Palestinian civilians on Al-Wehda Street – no excuses will suffice.

Robert Inlakesh is a political analyst, journalist and documentary filmmaker currently based in London, UK. He has reported from and lived in the occupied Palestinian territories and currently works with Quds News and Press TV. Director of ‘Steal of the Century: Trump’s Palestine-Israel Catastrophe’. Follow him on Twitter @falasteen47