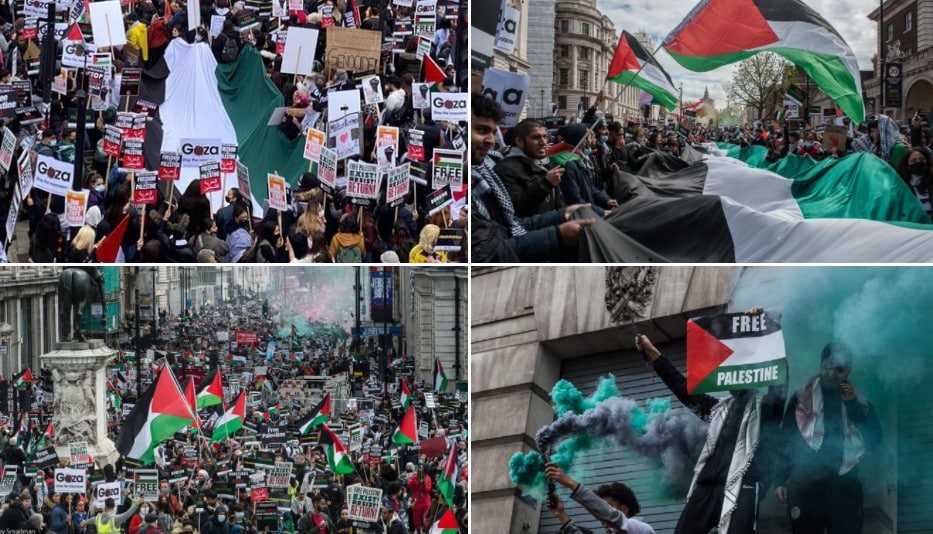 Common Dreams: Nearly 200,000 people gathered in London Saturday for what organizers said was one of the largest demonstrations of solidarity with Palestinians in the United Kingdom’s history.

Organizers with the Stop The War Coalition, Palestine Solidarity Campaign, Friends of Al-Aqsa, Palestinian Forum in Britain, Campaign for Nuclear Disarmament, and the Muslim Association of Britain had planned the protest before Hamas and Israel reached a ceasefire that began early Friday after an 11-day bombing campaign targeting the Gaza Strip.

Today hundred of thousands marched through London in support of Palestinians to end the occupation, the seige of Gaza and West Bank settlements.
The ceasefire is welcome but permanent peace can only be achieved with a free and independent Palestine. pic.twitter.com/2rYZYIaS7a

The attacks killed more than 230 Palestinians including dozens of children. Rockets launched by Hamas killed 12 Israelis, according to authorities.

The groups went ahead with the demonstration despite the ceasefire—which was brokered by diplomats from Egypt, Qatar, and the United Nations—noting that “Palestinians in Gaza still face a 15-year long siege that entraps them and violates all of their human rights.”

“Palestinians in the West Bank and East Jerusalem continue to face a brutal military occupation, including restrictions on movement, home demolitions, and the enforcement of military law on the civilian population,” organizers said in a statement. “Palestinian citizens of Israel are still subject to over 65 laws that discriminate against them and render them second class citizens, and Palestinians in exile are still denied their right to return home.”

The organizers expected roughly 150,000 people to take part in the solidarity march, but an estimated 180,000 showed up.

“This movement is growing every single day,” tweeted the Muslim Association of Britain.

Participants marched from Victoria Embankment to Hyde Park, chanting slogans including “Free Palestine!” and “No Justice, No Peace!”

Chants of “Boris Johnson, shame on you!” were also heard as the demonstrators demanded the U.K. end its complicity in Israel’s violent policies. As The Independent reported Saturday, equipment produced in the U.K. was used by the Israel Defense Forces in the most recent bombardment campaign.

Former Labour shadow chancellor John McDonnell was among the speakers who addressed the huge crowd at Hyde Park.

“Yes, a ceasefire has been negotiated and we welcome a ceasefire,” said McDonnell. “But let’s be clear, there will be no ceasefire in our campaign to boycott, disinvest, and sanction the Israeli apartheid state. The message is clear, we will not cease our campaign in solidarity until there is justice. So let’s make it clear, no justice, no peace.”

Demonstrators also gathered in other places including Paris, Dublin, and cities across the United States.

“Israel’s system of apartheid and ethnic cleansing cannot continue,” organizers of the historic London march said. “We can’t stop just because Israel has temporarily stopped bombing Gaza. We must campaign and protest until the Palestinian people enjoy what is their birth right: freedom, justice and equality in their historic homeland.”