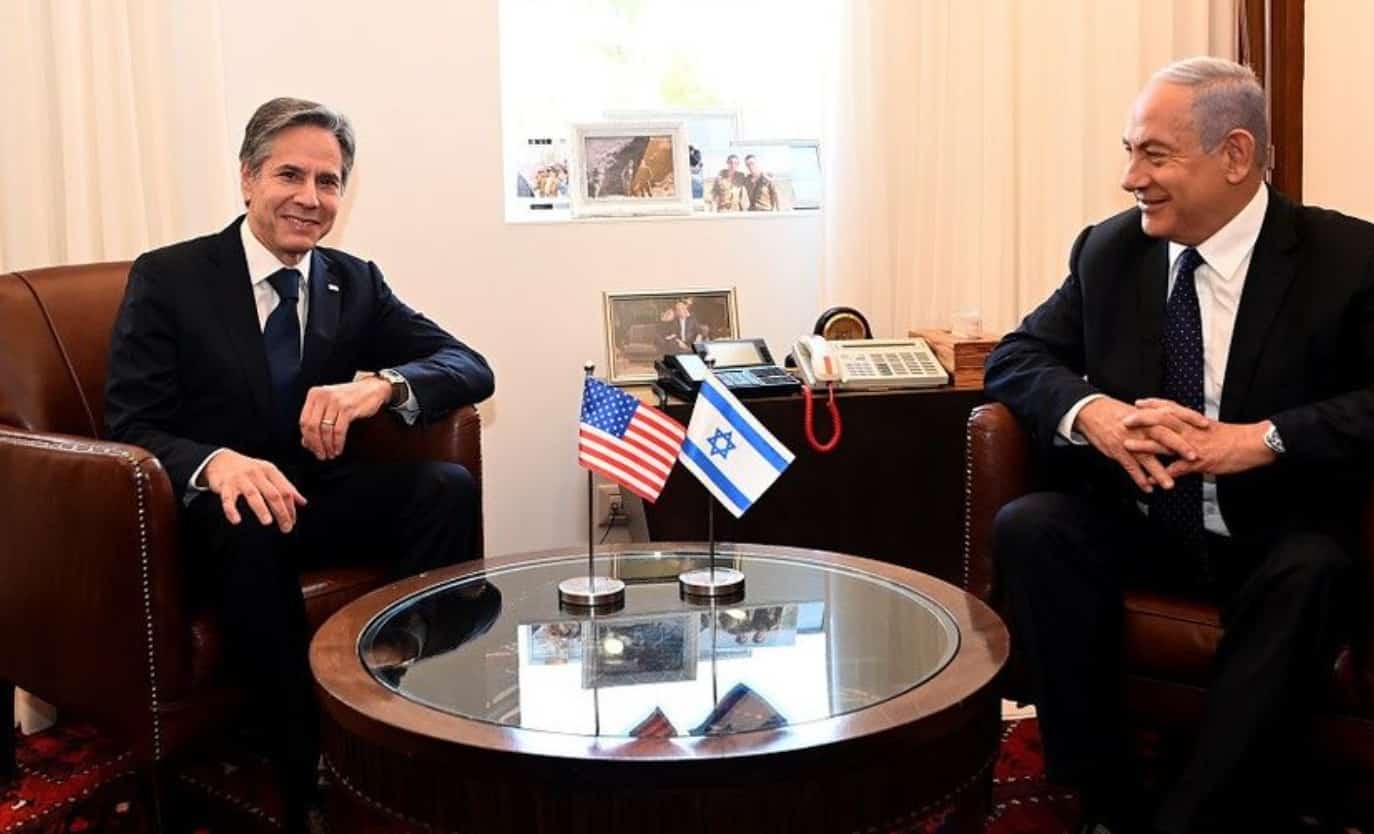 In every meeting that US Secretary of State Anthony Blinken conducted with an Arab party, the result was the following:

– Praise the Arab side, and for the important and sensitive role that this party played in stabilizing the ceasefire, and the priority in his speech is focused on sending aid to Gaza and rebuilding Gaza, pointing out that America considers Hamas a terrorist movement, and that this is pushing towards attempts by the Palestinian Authority to control everything related to the reconstruction of Gaza, and the introduction of aid in terms of humanitarian and security aspects, and the truth is that Blinken’s visit to the region was only planned to protect Israel, and an attempt to appease it despite all the crimes it committed and violated. For international law, the Geneva Convention and Security Council resolutions.

The American position, if we want to summarize it, is based on the following: –

First: – Commitment to support and protect Israel according to the agreements signed between the United States and Israel, and accordingly Blinken came to reassure Israel and Netanyahu that the United States is committed to developing the Iron Dome, which the resistance’s missiles succeeded in penetrating in the long and bloody fighting that lasted eleven days in which the resistance missiles extended to Israeli positions There were many, and Tel Aviv was struck, and this is what terrified the United States, as a result of Israel’s terror.

Second: – The United States will fulfill its obligations towards Israel, will proceed with what it has agreed upon with it, and that it will protect it from any attack it faces, whether it is missile or otherwise.

Third, Blinken emphasized that in his talks with Israel and the Arab countries he visited, he focused on sending aid for humanitarian reasons, meaning that it was neither political support nor a result of Israel’s crimes, and on this visit he emphasized that the United States considered Israel to be in a state of self-defense and not attack, and the destruction of Gaza’s buildings And the killing of its civilians, children, water and electricity networks, and the destruction of its infrastructure, and Blinken did not mention any wrong operation by Israel, even the one that affected the Associated Press, which in turn is working to conduct an investigation and file a complaint against Israel in the Criminal Court.

The Democratic Party of about 25 members of Congress called on President Biden to be objective, to put pressure on Israel as a result of its devastating attacks on Gaza, and to ensure the arrival of food, medicine and construction materials for the reconstruction of Gaza. They feel that the United States does not intend to do so, but rather intends to use the time to put pressure on the Palestinian Authority. To follow the path that she had planned, which is the Israeli track.

In every conversation that concluded his visit to the Arab countries and Israel, it was clear that the administration’s illiterate stance His rule is to support and defend Israel, and there is no doubt that his talk to reporters in Jordan expressed that. Jordan clearly and unequivocally stated that the holy sites should remain away from attacks by settlers, army forces, and armed police. Jordan’s concern was to receive from Blinken the following answer:

Blinken wants the Palestinian Authority to lead this process through security coordination as Israel wants, and not for the resistance to have the ability to defend its land and its people as we say, and they did not leave matters at this point in the prolonged submission to Israel, which practices murder and racist and barbaric practices.

Thus, they said, we will not allow the entry of any emergency aid before Hamas releases the Israeli prisoners that it has alive or dead, and in light of the Egyptian government’s position, which does not open the Rafah crossing to the Palestinians, and this matter must be discussed by Hamas and its delegation that was summoned to Cairo to discuss the issue of the prisoners.

For the Gaza crossing to be opened, and from here we see that the whole process that resulted from Blinken’s visit is that the regimes operating in the orbit of the United States have summoned the Hamas delegation to discuss the issue of the prisoners, while they are fighting Hamas with a livelihood for the release.

Regarding the prisoners, and Hamas must not accept. What is important is that we see that the general context for the American administration is the following:

Supporting Israel with all its criminal and racist practices and protecting it from any attack, whether by Hamas or at the international level, in the corridors of the United Nations,

and since the battle that took place raised the temperature of the region and pushed it to To be concerned with the Palestine issue after it had neglected it for many years and under successive administrations, it is here today that it was decided to sponsor the prisoners ’talks and take care of the reconstruction, and for the partners – the partners of the White House – to work to stabilize the ceasefire,

and we see from all this that what triggered the situation in the East The middle one is Jerusalem, the attacks of settlers and the Israeli police on the sanctuaries and courtyards of Al-Aqsa Mosque and the defenseless worshipers, and the ethnic cleansing campaigns for the Palestinians in Sheikh Jarrah, Jabal Al-Mukaber and Silwan, Wadi Al-Jawz and others.

Biden did not mention this for no indication or condemnation, but rather the settlers’ barbarians escalated their attacks, and the whole world sees what is happening on the ground on television screens, this is what Uncle Sam, who wore Blinken clothes, carried, and Uncle Sam says that Israel’s attack on Gaza is defense From oneself, storming the Temple Mount, and attacking the worshipers is self-defense.

The matter is clearer than it is clear, and we know that there is a circumvention of the struggles of our people and their peaceful resistance to the occupation in all fields, so we said and say that the decision to clash with Israel is not seasonal but is linked to the occupation that It only ends with the implementation of Resolutions 242 and 338.

America says that striking civilians and a fierce attack on homes to kill their residents is self-defense, and we are not advocates of closing the doors on ourselves, but rather we are advocates of diplomatic wars, and Palestinian Foreign Minister Riyad al-Maliki fought diplomatic battles to end the occupation, He was active in international forums in defense of the Palestinian right, but the problem we have is in rushing to what the external parties want, so we are lost in marginal, not basic discussions, which is an end to the Israeli occupation, and we repeat what the President said Abu Mazen, which is that the reason for all this is the occupation, and this talk is correct, but it must be transformed into a work map.

All groups in all fields must be revolutionized to fight the aggressive designs and attacks on our sanctities, our land, our trees, and our homes.

Silence on Blinken’s position – that is, Biden and the biased US administration – is not correct, and we must fight for our rights and demand an end to the occupation and endorse international legitimacy decisions, because whenever someone talks with the US Secretary of State about ending the occupation, he turns the conversation into aid, as if he says we have bought their silence. Biden is not discussing an end to the occupation except in Biden’s last days of his term, that is, when he starts packing his bags to leave the White House.

Therefore, just as the resistance forced its strikes and won victories in these championships in the Gaza Strip, and forced the American administration, which did not include Palestine on its agenda, to put Palestine is on the top of its priorities despite its preoccupation with the Vienna talks, and despite the withdrawal from Afghanistan and many global issues, we must force it to adopt a plan to end the brutal Israeli occupation of our homeland.

And the settlements of the Gaza envelope, Hadera and others, are resisting and our people are ready in the West Bank to struggle against settlers and occupiers a peaceful popular struggle, and they must understand that the role of Palestinian security is to protect the Palestinian people, not to protect Israel, and thus the authority will have strength and muscles without missiles, but in practice it is the struggle to stop The annexation of the West Bank, it is the gradual nibbling, and that ethnic cleansing is a crime all over the world, and in Palestine and Jerusalem it is the biggest crime.

They want to isolate Jerusalem from the West Bank, the West Bank from Gaza, and Gaza from Jerusalem and the West Bank, and this is an opportunity for the Palestinian Authority to not fall into ambush again, and you have previously fallen into the ambushes of the enemy time and time again, and the believer is not stung twice from a hole, and the authority must Biden dollars are rejected, and if this is our speech to the authority, then we have a letter of resistance, which is that the cease-fire in Gaza does not mean silence about the occupation practices, including Jerusalem, the capital of Palestine.

We must build on your great victory so that it becomes anchored in history because when you fought the battle it was In defense of Jerusalem, as Brother Ismail Haniyeh declared and declared it, that the reason for the battle was not because there were demands for Gaza but rather a victory for Jerusalem, and stopping work is an erosion of victory. You should not consider what happened in Gaza as a great victory that does not exempt you from defending Jerusalem against racist practices and cleansing.

You are an ethnic duty, and not be like the one whose victory consumes a bite of a bite, and you fought the battle in defense of Jerusalem, not in defense of yourselves, and Jerusalem is subjected to attacks by barbaric settlers and to Israel’s racist practices of ethnic cleansing and displacement.