Medal of Honor recipient and board member makes compelling case for new national monument before U.S. House of Representatives

[ Editor’s Note: The pool of living Medal of Honor people continues to dwindle, and so does the number of events they can do each year where they can press the flesh of America’s school kids so they can have the memory of having met one of them, to tell their kids some day.

While there seems to be military monuments galore for all things conceivable I had assumed there was one for the Medal of Honor somewhere. I was wrong. But I am happy to report that as these missing items are spotted we see groups forming to address them and get the projects done while there is still time to have enough living attendees to make a small crowd.

Ex-MoH Chaplain Woody Williams continues to reign as the senior member of the group at 97, the last from WWII. His foundation is running full steam now with its Gold Star Family memorial monument project, 150 built and in progress now as he persues his goal of getting 250 done before he is 100.

I am working on two for Michigan and one for my home county in Western Mass, scouting for potential locations now. If Covid continues to die people will be able to get back to doing what they like. I pray that a new variant monster does not emerge.

Do get by the the main MoH website and save the link, as it will take some time to sift through it all. It is a trip down memory road, roads not take by us, which is just as well, was we may not have made it…Jim W. Dean ] 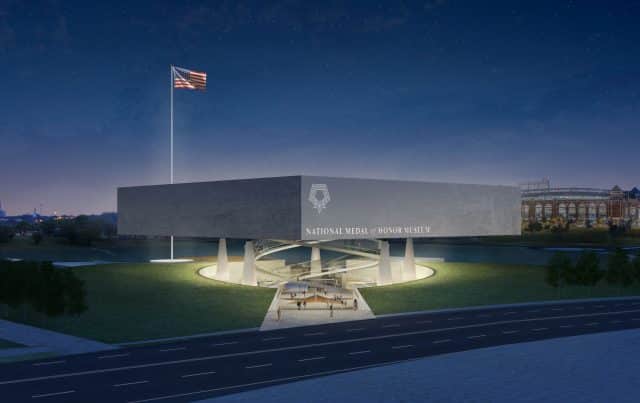 This bipartisan legislation, introduced in the House by Rep. Marc Veasey (D-Texas) and Blake Moore (R-Utah) in March, authorizes the creation of a national monument in Washington, D.C., recognizing the Medal of Honor – the nation’s highest military award for valor in combat – and the service and sacrifice of its fewer than 4,000 recipients.

HR 1664 and its companion bill in the U.S. Senate establish that the monument will honor the unparalleled bravery demonstrated by those who earned the Medal of Honor and the values it represents – courage, sacrifice, patriotism, citizenship, integrity and commitment.

“Today, there are just 67 living Medal of Honor recipients, including retired Colonel Ralph Puckett who just received the Medal from President Biden last week. Colonel Puckett is 94 and served in Korea. He is now one of only four living Medal of Honor recipients from the Korean war. Last month, we lost recipient Charles Coolidge from WWII, leaving Hershel “Woody” Williams as the last living recipient from that war.

Coolidge is one of three recipients who have passed away in 2021,” said Lt. Col. Swenson. “I tell you this to underscore the urgency and timeliness of the National Medal of Honor Monument Act. While this monument won’t be erected to or for myself and my fellow recipients, I know we’d all like to be around to see it completed.”

The creation of the Monument in Washington, D.C., will complement the future National Medal of Honor Museum, to be built in Arlington, Texas. The Museum is expected to break ground within a year, with an anticipated opening in 2024.

“An estimated 40 million people have served in the U.S. Armed Forces since the Civil War. Fewer than 4,000 Americans have earned the Medal of Honor for exhibiting exceptional bravery. This monument – to be built in our nation’s capital, accessible to all Americans – will celebrate the values of the Medal that we all hold dear.

I cannot think of a more unifying project. This monument will give all Americans a place to learn from those who have given so much in service to our country, and we urge Congress to swiftly pass this bill,” said NMOHMF President and CEO James T. Connors.

No federal funds will be used to create the monument. Instead, the National Medal of Honor Museum Foundation will be responsible for raising funds to cover the expenses associated with the project

Good afternoon Mr. Chairman, Ranking Member, and other distinguished members of the subcommittee.

It is a privilege to be with you today to discuss the National Medal of Honor Monument Act.  Before I continue, I would like to thank Congressman Veasey and Congressman Moore, a member of this subcommittee, for their leadership in sponsoring this important bill.

An estimated 40 million people have served in the United States Armed Forces since the Civil War.  Fewer than 4,000 have received the Medal of Honor.  I am humbled to be one of those 3,508.

Like my fellow recipients, I don’t wear this Medal for myself.  Each time I put it on, I do so for the men and women I fought alongside, for all those who serve, and especially for those who made the ultimate sacrifice I never got the chance to return home.

Last month, we lost recipient Charles Coolidge from WWII leaving Hershel “Woody” Williams as the last living recipient from that war.  Coolidge is one of three recipients who have passed away in 2021.

I tell you this to underscore the urgency and timeliness of the National Medal of Honor Monument Act which is before you.  While this monument won’t be erected to or for myself and my fellow recipients, I know we’d all like to be around to see it completed.  So, we sincerely appreciate you scheduling this hearing today and your continued swift consideration.

In February 2020, myself and General Patrick Brady, a fellow Medal of Honor recipient, were able to testify at a hearing of the National Capital Memorial Advisory Commission.  We had a robust discussion about this project and the significant impact it will have on the country, and we were very happy to earn their support.  I believe this committee has a copy of the Commission’s letter of support.

One of the unifying parts of the Medal of Honor is that it covers all branches of the military and every war since the Civil War.  It is timeless and inclusive.  Additionally, recipients of the Medal have come from all races, religions, and points on the political spectrum.

While most were born in the United States, many were first generation Americans.  What we have in common is love of country, willingness to serve our fellow man, and a strongly held belief in the values the Medal of Honor represents.

These are the values which guided us on the battlefield and in our lives ones we returned home.  We believe these same values will inspire current and future generations of Americans in their daily lives.  Whether they face difficult situations or decisions and find strength in our stories or are simply lifted by the knowledge we all have these shared values within us.

Recipients of the Medal of Honor aren’t unique or special.  Wearing this Medal does, however, open doors and afford us unique opportunities.  One of those opportunities is to have a voice in the public arena and to be a force for good in a world which is too often divided.

The great thing about this project is how it has brought together Americans from every walk of life, every state in the union, and is even supported here on Capitol Hill in a completely bipartisan way.

We are hopeful that in these divided times, we can all find a moment of unity as we recognize our shared values through the Medal of Honor as well as the contributions great patriots have made to this country.

The National Medal of Honor Monument, like the Medal of Honor around my neck, will be a tribute for ALL Americans.  Not just those who wear the Medal. Thank you again for inviting me to join you today.  We sincerely appreciate your interest in this historic project.

About the Museum and Monument: The National Medal of Honor Museum, Monument and Leadership Institute will inspire Americans by honoring and preserving the history of the highest military decoration awarded for valor in combat.

Serving as a national landmark – and located in America’s heartland in Arlington, Texas – the Museum will provide an unrivaled visitor experience and illustrate the historical thread of sacrifice, patriotism and courage that runs through all U.S. military service members, past and present.

Beyond its state-of-the-art, interactive experiences, a critical part of the Museum’s mission will be to use the stories of Medal of Honor recipients to inspire their fellow Americans and motivate them to be their best selves.

A National Monument in Washington, D.C., will commemorate the service and sacrifice of the bravest and most decorated members of the U.S. Armed Forces. To be located in the nation’s capital, it will give all Americans the opportunity to reflect on the courage and patriotism that safeguard freedom and democracy.