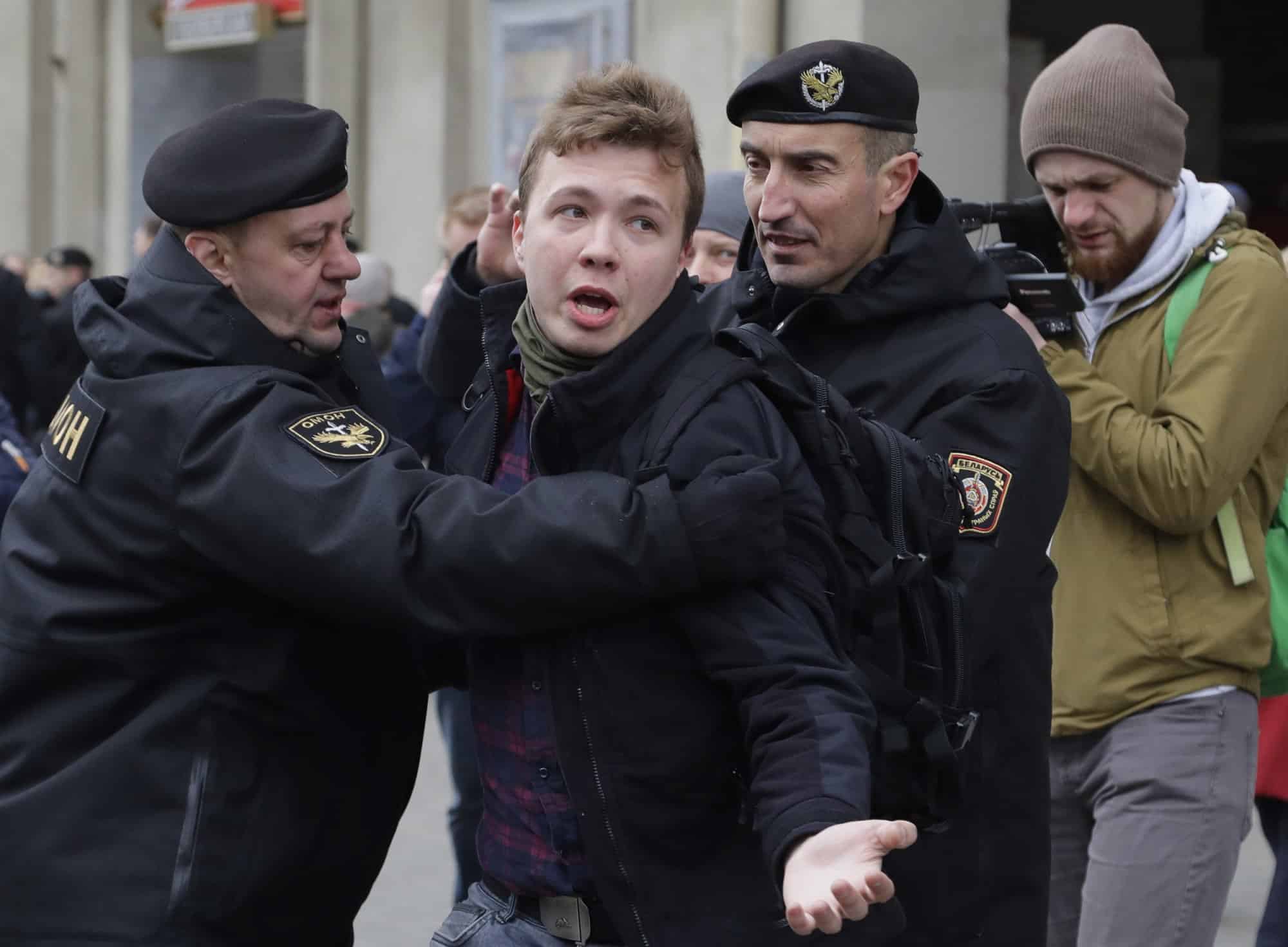 What made Ryanair decide to fly a wanted Belarusian political criminal through Belarusian airspace? That was just asking for trouble, frankly. Well done Minsk for spotting it and arranging to divert the aircraft. The MSM, who are pretty nutty anyway, no offense intended, have gone nuts.

Anyone would think that the Belorusian Air Force had shot the plane down. In fact the captain of Flight FR4978 very properly obeyed directions from Minsk ATC to divert to Minsk.

I respectfully agree with President Lukashenko’s restrained and sensible comments on the affair. These are to be contrasted with the hysterical response of the EU. Brussels hates the fact that President Lukashenko won the last election fair and square – Minsk is not Philadelphia after all. Elections in Belarus are conducted fairly, indeed they don’t even use voting machines.

Belarus enjoys political freedoms which Britons, crushed under the heel of the Cabinet Office/GO2 jackboot, can only envy. (Cabinet Office control over the government was hinted at by sacked adviser Dominic Cummings in his damaging revelations on Wednesday.) Britain’s justice system falls a long way short of Belarusian standards, sadly. I can’t imagine the KGB letting German intelligence get away with running a listening post in Minsk tapping the phones of every senior Belarusian judge in order to acquire blackmail material.

Roman’s father has suggested that he was tortured, but I suspect that he was entering into the realms of conspiracy theory. Roman might need a bit of dental work, but that is more a comment on Lithuanian dentistry than Belorusian interrogation methods. The Belarusian KGB are well known for their respect for democratic norms, with respect. Ivan Tertel and the boys do good work.

It’s more likely that Roman’s perfectly proper confession was down to good intelligence and some revelations that he found difficult to cope with. I note that the MSM are going with the theory, which I don’t necessarily share, that he’s heterosexual. His arrest was a big win for the Good Guys and a blow for the Bad Guys, who’ve been trying to install a German-backed dictator in Minsk.

Another week, another shooting, I’m afraid. This time it was in San Jose, CA, at the Santa Clara Valley Transportation Authority, with one dead shooter and nine dead victims. The authorities, as usual, are going with a single-shooter theory, 57 year old Samuel Cassidy in this case, and obsessing on how he acquired his weapons at the expense of the ammunition.

There’s nothing to stop the San Jose Police Department consulting me of course. Even if I do say so myself, overcoming my natural reticence, I am one of the world’s leading authorities on the DVD, the only intelligence agency using mass shootings as a tactic, treating sub-agencies like the Correa Group as part of the DVD. I have in fact been consulted by US law enforcement, in every case linked into the networking done at the Intelligence Conference (Intelcon) 2005 and the Intelligence Summit 2006, each held at the Crystal City Hyatt near the Pentagon.

Police officers, unless they’re with Thames Valley Police, like to check people out before consulting them. I’m good with that. Seeing their proposed consultant hob-nob with the CIA and the DIA gives confidence. My track record is pretty good. It was me who picked up the significance of the Moslems working near the critical bolts on that interstate bridge over the Mississippi, for example.

For the benefit of my British readers I should explain that the Mississippi is a Big Momma of a river. It’s not the Windrush, a gentle stream meandering through green fields. When the Windrush floods and they put up road signs saying ‘Flood’ expect a puddle. When the Mississippi floods, expect to see SUVs floating past with desperate drivers on top hollering for help. 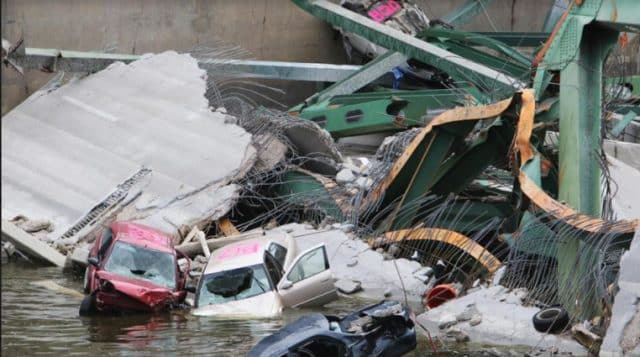 The problem is that the DVD spotted the danger – for them – of the law enforcement and intelligence communities building bridges (as opposed to bringing them down, a known DVD tactic!). The conferences were stopped, although they morphed into cruises for a few years. There’s no way that the boys in San Jose are going to consult me. That means no serious investigation, since there’s no other expert available on the DVD, who almost certainly set up the shooting.

The FBI will shut the investigation down as usual. The Biden regime won’t care, since the dead were Americans. It’s all very sad. Since this was California it’s likely that of the nine victims about five were Democrats. That still leaves four innocent victims.

Regime policy is to sacrifice US citizens to the DVD. You can just imagine the conversations – ‘hey Mr President, a museum in Mexico City has come up with a great idea. Apparently the Aztecs used to sacrifice people daily in order to make sure the sun came up. Turned out the sun was a star, not a god, so the sacrifices weren’t necessary, but we could try that with the Germans.’

The flaw in this cunning plan is that the Germans will just keep on killing. They killed as many as 75 million people in their Spanish Flu WMD program. Eighteen million of those were Indians. That’s more Indians than were killed in the last big battle with the Sioux. I’m aware of course that those were red Indians, not brown Indians, but you get the picture. (For the avoidance of doubt this column has been rigorously scrutinized for compliance with the Bar Standards Board and the Solicitors Regulation Authority’s valuable equal opportunities and diversity guidelines by Shrimpton & Associate’s able Compliance and Diversity Officer (me!)).

It’s not just Americans who are being sacrificed. Every government in the Western world is in awe of the DVD. Nobody has ever got to the bottom of a mass shooting and at the current rate of progress nobody ever will.

Dominic Cummings was not the only person in the news this week in the UK. Former Supreme Court judge Lord Dyson delivered his long-awaited report on the scandal over Martin Bashir’s notorious interview with the late Princess of Wales. Long-awaited that is by those not close to the Cabinet Office. Lord Dyson is nothing to do with vacuum cleaners by the way.

Of course the idea that a retired Supreme Court judge could deliver a report which got at the truth only has to be stated for its absurdity to be apparent, no offense intended. Judges are experienced at putting the boot in to individuals, so are ideal for this type of situation.

The interview was part of the Cabinet Office’s strategy of preventing Prince Charles from becoming king. The ploy failed, thankfully, but there’s no way that it was just Bashir’s idea. The BBC reports to the Cabinet Office. The Cabinet Office of course escape any criticism in the Dyson Report.

In the meantime Martin Bashir remains on the BBC payroll, unsurprisingly, since a deal has very obviously been done. Nobody at the ‘Beeb’ wants him telling who gave him the orders. He’s handed in his notice, but that means he gets to keep his pension.

The forger, who became a whistle-blower, was treated badly of course. Most whistle-blowers in the UK are, on Cabinet Office orders. The forger has yet to be compensated. What no one is asking is how the forger knew the details of the bank accounts of members of the Royal Family. He couldn’t just knock up any old bank statement – it had to be a reasonable facsimile of the original. Who gave him the originals?

John Dyson, by the way, is a nice chap, even though he was appointed to the Supreme Court. We met over 20 years ago when I was sitting on the old Immigration Appeal Tribunal. One of my valued colleagues, the late Ray Maddison, who was very balanced and objective and gave everybody a fair hearing before deporting them, used to use a standard formula for refusing leave to appeal.

This led to a large number of judicial reviews, which started to gum up the works in the Crown Office, which then handled JRs. Mr Justice Dyson, as he then was, was sent ‘across the road’ to try and persuade us chairmen to use bespoke leave refusals. I was already doing them of course, and was only ever judicially reviewed twice, but then I could only deal with 15 cases a day, whereas Ray could whizz through 20 or more. John Dyson suggested that Ray, who wasn’t at the meeting, stopped using his pro forma.

We were slightly resentful at what we saw as judicial interference and I am sorry to say that my response was that we had been telling Ray to change his pro forma for years! Dyson J. was not best pleased.

No one should think that I am criticising Ray, who was a lovely man and a fine immigration lawyer. He was consulted over the planned changes in the law in 1993 which gave asylum seekers a right of appeal even if they had entered illegally. Ray warned the Home Office against the proposed change and he was absolutely right. He rarely got decisions wrong. I still prefer the bespoke approach to leave decisions by the way, but I acknowledge the usefulness of greater judicial productivity.