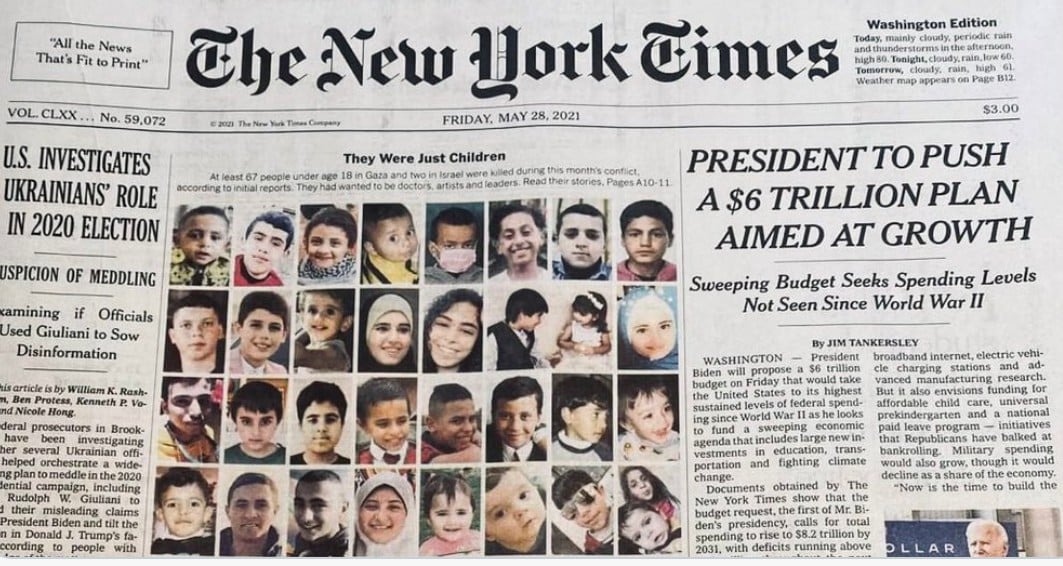 More people are becoming conscious of the Palestine issue and politicians and pundits can no longer get away with painting themselves as progressive-minded humanists without acknowledging the brutal nature of Israeli occupation.

The National Director Emeritus for the Anti-Defamation League has announced on Twitter that he is cancelling his subscription to The New York Times, claiming that a front-page story featuring the photos of children killed in Israel’s assault on Gaza this month constitutes “blood libel” against Jews.

“I am cancelling my subscription to NYTimes,” tweeted Abraham Foxman. “I grew up in America on the NYT – I delivered the NYT to my classmates – I learned civics – democracy and all the news ‘fit to print’ for 65 years but no more. Today’s blood libel of Israel and the Jewish people on the front page is enough.”

Foxman’s statement drew criticism from all corners, including from loyal establishment pundits like Jonathan Chait, for his ridiculous assertion that merely humanizing Palestinian children killed by Israel is the same as promoting the ancient antisemitic canard known as blood libel.

To be clear, what has incensed the former leader of the @ADL is that the @nytimes, after decades of trivializing Palestinian death, has humanized our children by showing their faces & printing their names. #Gaza https://t.co/TCNAj8GY1J pic.twitter.com/Vehj9wTjZL

Supporters of Israeli apartheid and mass murder are losing control of the narrative, which has led to redoubled perception-management efforts, ranging from the cringey to the iron-fisted. In the former category we’re seeing them pen entire articles attacking Seth Rogen for tweeting a fart emoji at virulent Israel apologist Eve Barlow and claiming that putting “fart” in Barlow’s name is the same as a literal pogrom. In the latter category they’re blowing up entire press offices and arresting Palestinian journalists. This is narrative management at its least subtle.

“Administrative detention” is one of the many apartheid abuses which Israel has come under criticism for employing, as Israel-based +972 Magazine explained last year:

According to lawyers who defend Palestinian detainees, administrative detentions are almost always based on “confidential material” handed over ex parte to the courts by the Shin Bet, to which the detainees themselves and their lawyers have no access. As a result, it is virtually impossible to defend oneself against an administrative detention order.

Before the Gaza ceasefire last week Israel managed to deliberately blow up over 20 offices for Palestinian media outlets, as well as the tower hosting the international outlets AP and Al Jazeera.

“The world will know less about what is happening in Gaza because of what happened today,” AP president and CEO Gary Pruitt said in a statement after the building was destroyed.

Which, of course, is the whole idea: for the world to know less about what happens in Gaza. The Israeli government has a decades-long history of threatening and targeting journalists in order to exert control over the public narrative about what happens under its rule, and as that narrative slips from its grip we are seeing this pattern ramp up with greater and greater aggression.

“Rather than reduce the cruelty, the Israeli government keeps trying to reduce accurate news coverage,” author and activist Norman Solomon writes. “The approach is a mix of deception and brutality. Blow up the cameras so the world won’t see as many pictures of the atrocities.”

As Alan MacLeod wrote in Mintpress News, the Overton window has shifted on Palestine. During 2014’s far more deadly Israeli attack on Gaza we saw a low-level local Democratic official sparking outrage and scandal by merely posting “Palestine <3” on Facebook, now you have words like “apartheid” being routinely used by mainstream media outlets and national US political figures to describe Israeli abuses of the Palestinian people.

People are simply becoming too conscious of the Palestine issue to tolerate its existence as a taboo subject anymore, even in the most mainstream circles of discussion. The old tactics of silencing and marginalizing Palestinian rights advocates simply do not work anymore, and politicians and pundits can no longer get away with painting themselves as progressive-minded humanists without acknowledging the brutal and unjust nature of Israeli occupation.

Palestine is simply not a third rail anymore, and it’s been this way for a while now. By the time I started doing commentary in late 2016 people were still saying you’ll be smeared as an antisemite and dragged through the mud if you criticize Israel, but my experience this entire time has been that I get a lot more vitriol and attacks coming my way by criticizing US imperialist agendas toward nations like Russia, China, Syria and Venezuela than by criticizing the Israeli government. There’s pushback to be sure, but it’s not nearly as vituperative as what I’m used to.

This last attack on Gaza was just the ignition of a powder keg in shifting public sentiment that had been building for several years, and it hasn’t been due to any top-down effort at perception-steering by the establishment narrative managers, but by ordinary people sharing ideas and information and moving the Overton window of acceptable debate through sheer force of will.

The fact that this can be done makes one wonder in what other ways we can collectively move the narrative in a way that benefits ordinary people instead of the oligarchic empire of the US and its allies. This is an exciting time to be alive.