[ Editor’s Note: We see signs that the US has told its Persian Gulf allies that they will have to join up with Israel to maintain their dominance because the Pentagon wants to redeploy more US forces to the China theater, permanently.

Trump wanted to be joined at the hip with Israel, thinking that would help assure that he would be reelected to continue being a faithful shill for all things Israel, and also be able to help put the fix on his growing legal problems.

We should not be surprised to see Biden wanting to get the Gulf States firmly into his column for future US elections, to cut Trump off at the pass, and where Trump could get to reap the reward of all his bad deeds, eventually with his being regarded as America’s most disgraced President in modern times.

As Rafi Sheikh writes below, Biden is trying to air brush the so-called Abraham Accords out of the picture, preferring a more bland term for now, describing it as a ‘normalization process’ that Biden can later put his name on.

Whereas Trump was always focused on getting into a catbird seat to grab as much money as possible to shore up his house of card businesses, he additionally foresaw the need for lots of political muscle to help keep him out of jail.

Rafi spends much of this time below on the ‘qualitative military edge (QME)’ issue, which Israel wants to have hard wired into any and all US-Mideast agreements. It’s a double con, as it will create a demand from the Gulf States for US weapons where the US can always tilt the scales, theoretically anyway.

Israel made sure that its lobbying and espionage control over Congress will be extra insurance for a new president that wants a balanced military situation in the Gulf versus the Israel lobby always wanting Israeli military superiority.

American taxpayers are just along for the ride. That seems to never change, and they bear some, but certainly not all of the responsibility for that… Jim W. Dean ] 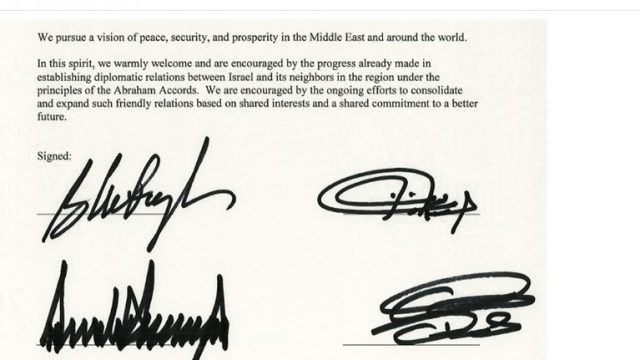 While the Abraham Accords may have made Israel a friend of the UAE and Bahrain, kicking off a ‘peace process’ that may ultimately include other Gulf Arab states as well, a growing possibility of US physical retrenchment from the Middle East logically leaves Israel as the sole regional power.

That would leave Israel capable of militarily handling Iran, Turkey and Qatar—the chief rival bloc aiming to challenge the signatories and proponents of the Abraham Accords.

At the same time, while the Accords have endeared Israel to the UAE and Bahrain, there is no gainsaying that Israel will remain watchful of how the UAE uses this Accord to advance its own interests, particularly those related to its ambitious military modernization program.

The UAE’s advance military capability will inevitably have a direct impact on regional balance of power, which the Israelis want to remain tilted to their advantage even after the Accords; hence, the bi-partisan bill placed in the US Congress to guarantee Israel’s qualitative military edge (QME) over its adversaries and friends alike.

Whereas the bill shows that Israel’s obsession with its security remains intense despite the Accords, the bi-partisan bill also shows that there exists a consensus in Washington that makes Israel the only alternative to the US’ decades long dominant role in the Middle East. The US political elite wants to make sure that the Arab states never become too strong to be able to directly challenge Israel and threaten its existence.

The bill reaffirms that Israel remains the US’ most important strategic ally in the Middle East. Therefore, the Congress wants to impress upon the President that “consistent with long established United States law and in support of one of the most important United States allies, [the US President] must ensure that any sale or export of defense articles or defense services to countries in the Middle East region does not in any way adversely affect Israel’s qualitative military edge.”

The bill, giving Israel a ‘veto power’, also requires the President to consult with the Israeli government to ensure QME concerns are settled, and would require the President to submit a determination to Congress on the QME impact of a given sale within 60-days of its formal notification.

While legislation to this effect already existed in the US, the fact that this reiteration has come directly after the Accords reflects the nervousness prevailing in Israel over the possible sale of F-35 fighter jets to the UAE.

While the UAE, aiming to position itself as the Gulf Arab world’s new leader, has its own reasons to buy these jets, there is no denying that a UAE possession of these jets will no longer leave Israel the only country in the region with these aircrafts, compromising Israel’s qualitative edge.

While this may sound strange given that Israel and the UAE are now friends and allies, the fact of the matter is that despite all the up-beat claims about peace and friendship, Israel, obsessed as it is always with its national security, is still too far from making a sound assessment of how and if this newly founded friendship would work to its advantage.

When Jordan made peace with Israel in 1994, the announcement came along with debt relief and the sale of F-16 fighter aircraft — and, like Egypt, Jordan remains a top recipient of American assistance.

While the US did reward Egypt for its normalisation, an important reason was that the US wanted to wean Egypt away from the Soviet Union as well. The same imperative is relevant today as well. Accordingly, while the US wants to address Israeli concerns, it also wants to make sure that the UAE still gets enough to keep the Chinese and the Russians away.

Already, in the US calculation, the Chinese are looking at ways and means to enhance their weapon sales to the Middle East. Weapon sales is a proper conduct of foreign policy. If Chinese weapons pour into the Middle East, it will leave the US in an even more precarious situation vis-à-vis the region it has been dominating for a long time.

The Pentagon’s 2020 China Power Report included a section noting that China has likely considered building a military logistics facility in the UAE to support its military operations. Such a base would unquestionably play a role in China’s strategy to undermine the US military’s warfighting edge, and serve as a platform for China’s global geo-political expansion. The US, through its sale of F-35s to the UAE, wants to keep the Chinese at bay.

The bi-partisan bill, in this context, is not aimed at blocking the sale of F-35s to the UAE; it is more about making sure that the sale takes place within the framework of this bill and that it does not in any way create a strategic disadvantage for the Israelis.

It is important for Israel not to sabotage the Abraham Accords through its opposition to the sale of F-35s. At the same time, the US wants to make sure that Israel’s concerns are properly addressed.

What we can and should, therefore, expect is extensive negotiations between the US and Israeli officials. Let’s not forget that this wouldn’t be the first time when both countries would engage in such a process.

In 2013, when the US sold F-16 jets to the UAE, the Obama administration negotiated a package for Israel to maintain its military edge that included V-22 Osprey aircraft, advanced refuelling tankers, and anti-air defense missiles.