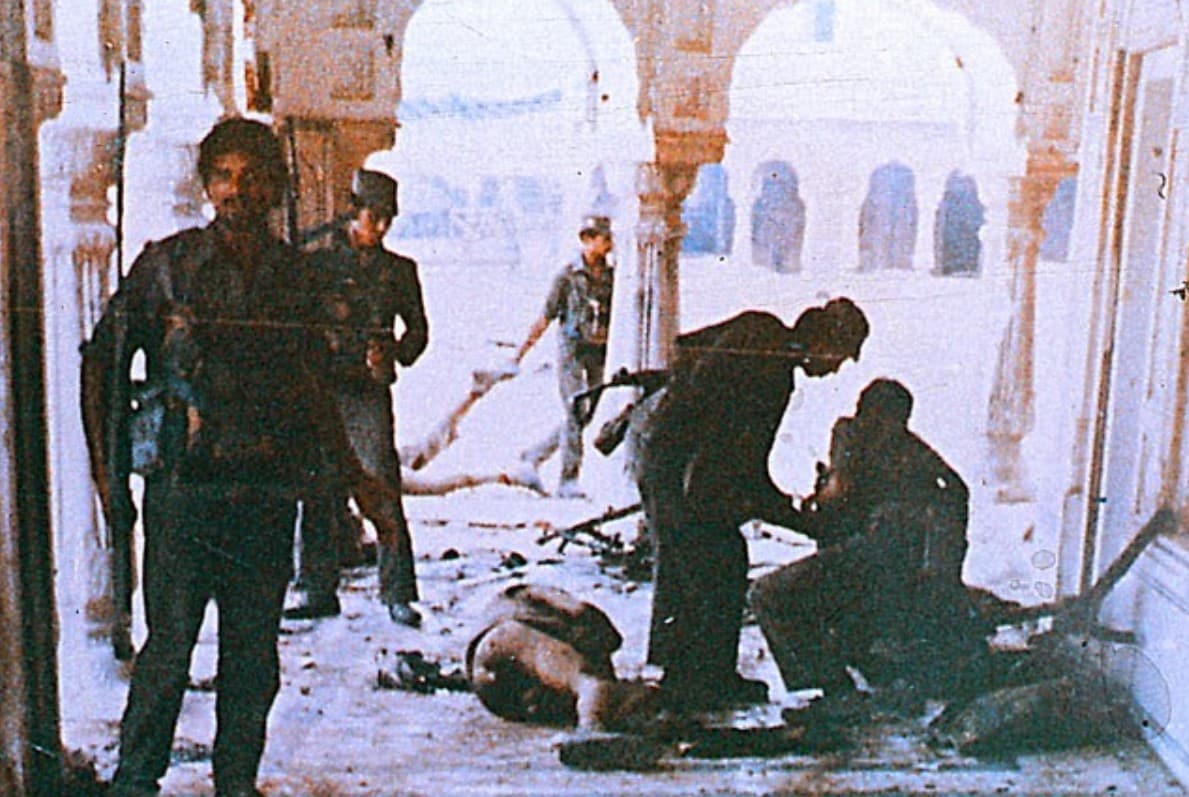 ‘Operation Blue Star’ was an Indian military operation which occurred between 3–8 June 1984, ordered by the then Prime Minister Indira Gandhi to control over the Harmandir Sahib (Golden Temple) complex, the holiest shrine of the Sikhs in Amritsar, Punjab, and to arrest Jarnail Singh Bhindranwale and his armed followers from the complex buildings.

Bhindranwale had earlier taken residence in Harmandir Sahib and made it his headquarters in April 1980. Jarnail Singh Bhindranwale was the only leader who had boldly been fighting for the genuine rights of the Sikhs.

Indian Army led by General Kuldip Singh Brar, supported by troops and armoured vehicles broke all records of the state terrorism and extra-judicial killings through that barbaric operation.

However, at that time, there were only 251 Sikhs inside the complex to protect the Harmandir Sahib, and to resist the well-trained Indian army, equipped with sophisticated weaponry. In those days, majority of the Sikhs were coming to the temple-complex to celebrate Martyr Day of Guru Arjan Dev Ji.

Then the Indian regime used tanks and destroyed the Akaal Takhat Sahib which is right in front of the Harmandir Sahib. On June 6, when all Sikh fighters were martyred along with Jarnail Singh Bhindranwale, Indian troops entered the temple-complex with their shoes by deliberately ignoring the holiness of the place, showing utter indecency.

When the Indian Army felt that only 251 men had prevented them from entering the Harmandir Sahib for so many days, they started killing innocent Sikhs who had come there to visit the temple. The only purpose was to hide their humiliation.

In this regard, in their book, “The Sikh Struggle”, Ramnarain Kumar and George Sieberer writes, “The army killed every Sikh who could be found inside the temple-complex. They were hauled out of rooms, brought to corridors on the circumference of the temple and with their hands tied behind their back, were shot in cold blood.

Among the victims were many old men, women and children.” However, all visitors were locked up in rooms for two days without any food, water, or electricity and were starved to death. Besides, the Harmandir Sahib remained under the army control for many months.”

The brutality of the ‘Operation Blue Star’ was not confined to the Harmandir Sahib. Indian armed forces simultaneously attacked 40 other historical gurdwaras all over East Punjab.

When Sikhs in other states came to know about the desecration of the Harmandir Sahib and massacre of their brethren, they quickly left for Punjab. New Delhi tried to stop them before they could reach Punjab. Many Sikhs were assassinated on the way and many others were arrested.

According to an estimate, about 50,000 Sikhs were killed within a few days. The whole Amritsar city was sealed and was burnt. A number of tourists either were murdered or arrested. Shops belonging to Sikhs were looted and their houses were set ablaze by Hindu mobs. In most of the cases, Sikh women were molested and some persons of their community were also burnt.

Another tragic dimension of the operation is that historical Sikh artifacts—all the literature written by the gurus was also set ablaze by the Indian army. But New Delhi fabricated a false story by claiming that it was burnt, while bombing the Harmandir Sahib.

In the same year of November, two dedicated Sikhs named Beant Singh and Satwant Singh who were posted at Premier Indira Gandhi’s residence in New Delhi, assassinated her. Then Hindu riots erupted in the capital and other cities in which more than 15,000 Sikhs were murdered in broad daylight by the supporters of Indira Gandhi, while police watched silently so as to provide the Hindus with free hand to massacre Sikhs.

Nevertheless, the attack on the Harmandir Sahib and genocide of Sikhs accelerated the liberation movement for Khalistan as Bhindrenwale became a folk hero.

Meanwhile, after ‘Operation Blue Star’ and the Sikh genocide, Sikhs’ struggle for independence continued, but the Indian government made every effort to crush the same with the state machinery. To maintain its control over the Harmandir Sahib, another attack was launched on the Temple in 1987, called ‘Operation Black Thunder’.

This time only Sikh resistance which was natural outcome of the tragedy, was the main target. In that respect, quite a number of people of their community were killed and dead bodies lay inside the sacred place for many days.

According to a report, many trucks were loaded with dead bodies and all were burned with kerosene oil. Afterwards, ‘Operation Woodrose’ and ‘Operation Black Thunder-II’ were conducted against the Sikh community, which also assassinated them extra-judicially.

After these barbaric operations, Sikhs organised themselves into an armed power in order to fight the Indian state terrorism. Many Sikhs left India to escape religious persecution. Sikhs have spread out all over the world to keep the movement of Khalistan alive. In this connection, their struggle is still going on.

We may conclude in the words of a renowned scholar, Dr. Sangat Singh who writes in his book, “The Sikhs in History”, remarks, “The Indian government has killed over 1 million to 1.2 million Sikhs. Since 1947, Indian government has also killed 50,000 Christians and 100,000 Muslims. The only way to stop this state terrorism is to create a Khalistan state, where Sikhs and other religious people can enjoy their freedom.”