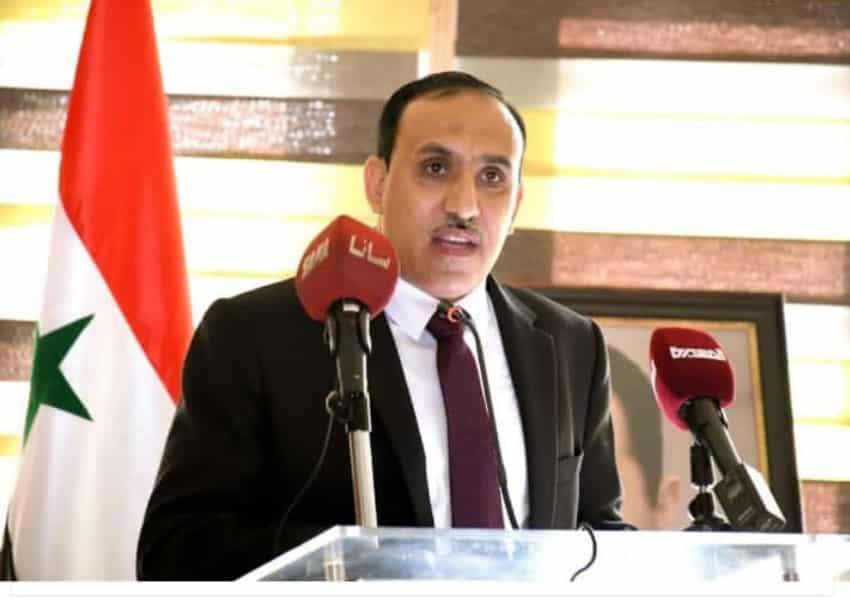 Yemeni forces can move to a bigger attacking stage, we hope the enemy does not have to

With more surprises, threats and feasts, Yemeni army forces and the popular committees proceed in the battle of Al-Nasr all over Yemeni territory.

There is no solution in the Yemeni crisis except by arguing with the Sana ‘ a government and accepting its terms and not imposing conditions on it. This is the matter of who gave blood, and who was encouraged to defend his land in a battle where most of the countries of the world came together and they all failed.

To learn more about the latest developments in the Yemeni War, Mirror Al Jazeera hosted in a special dialogue, the Yemeni Ambassador to Syria, Mr. Abdullah Sabry.. Mirror of Al Jazeera.

Yemeni Ambassador Abdullah Sabri said: ′′ When we talk about the recent regional variables, Yemeni resilience and successive victories against the Saudi American Aggression coalition are key factors that have created a significant variable in the regional equations, which are pouring into the positive pillar of the resistance axis, which have taken.

Greater momentum after the victory of the Palestinian resistance in the battle of Jerusalem, in addition to the success of Syria in the last presidential elections, so any progress on the resistance front, reflects positively on the Yemeni landscape, and vice versa “. The Yemeni Ambassador touched on Jizan’s last operation Confirming that it is not the first time that Yemeni People’s Committees have been able to penetrate into the Saudi depth of Jizan or Asir and Najran.

The last operation broadcasted by the war media has come to remind Al-Saud of their shameful situation militarily, and even wing Peace has a reality before we enter the stage of great pain. He added that our messages previously and currently that Sana ‘ a cannot be subdued, and that power equations tend to benefit Yemen, supporters of Allah and national forces against aggression, and that variable should be recognized by the Saud and leave past dreams.

After the September 21 revolution, it is not the same as before, if they don’t understand, then on itself, Riyadh will be Paradise. Past experience taught us, Sabri completes his words, not to trust in America and Saud, they usually misread messages, if we had taken advantage of their deceitful conversations, we would have found them and taken advantage of the calm, and escalated militarily Bigger.

He continues, by the way, we see the siege as an act of war and its continuation as escalation in one way or another, from this angle, we are defensive no more, and the army, grassroots committees and rocket power can still move to the stage A bigger attack hopefully the enemy won’t have to reach it as long as he’s serious about peace offers and initiatives.

As for the Battle of Marib, the Yemeni diplomat said, Sanaa refused to receive the United Nations envoy for more than a year, when he found him exposed to the aggression alliance, unlike what the mediator’s mission assumes, but this time Sanaa ‘ a has reached with him holding debatable ideas, and entails On a limited response to the national party’s demand for separation of the humanitarian file from the military and political tracks, Griffith’s mission is almost over in Yemen, pending the announcement of the appointment of a new United Nations envoy, with Griffith taking over the site of the Assistant Secretary-General For humanitarian affairs at the United Nations, a site that is not convenient to ignore who can.

He continued, undoubtedly, the optimism expressed by the United Nations envoy is linked to the change in Saudi dialect after recent military developments, but it is too early to be inhabited for such an atmosphere, unless practical steps are specifically announced by the aggression.

The Saudi approach to Syria and the Saudi turn to Syria, Sabri believed that any Arab convergence with Syria emphasizes Syria’s role and position in the region, and that the attempt to isolate it has failed, and this success for Syria is a success for the axis of resistance that We are influenced and influenced by it.

From this point of view, I don’t think that the Saudi convergence with any country in the axis of resistance can succeed in isolating its aggression and war against Yemen.

During the past period, the international community has double standards in the issues of recognizing this government or that, but the international failure to recognize the rescue government has not prevented or prevented Sana ‘ a from communicating with the world with countries, peoples and organizations, especially after She is proven to dominate and win militarily.

By the way, countries that recognize Hadi’s government have not been able to practice diplomatic work from inside Yemen until today, which makes their position separate from reality, unlike those that establish diplomatic relations with Sana ‘ a, although limited, but bet on the winning horse. God willing.

He pointed out that the relations of the countries of the resistance between them exceed political and media messages. We, for example, face the same enemy and divide the same suffering, and we are one side in the future victory thanks to God.

The Yemeni ambassador denied the commentary on the announcement of Abdrabeh Mansour Hadi’s government issued compulsive arrest warrants through Interpol against him. He explained that ′′ For the record, I personally was in a state of travel and Damascus reached through official procedures after overcoming the obstacle to exit Sanaa, and we did not hear that a country had dealt with this so-called memo “.

He added ′′ We are on our part. We look at Hadi and the mercenaries around him as war criminals being tried by the Yemeni judiciary, and we are working to prosecute them even when they are outside Yemen. ′′

There is no doubt that Yemeni foreign affairs continue to knock on doors, towards restoring diplomatic relations with other countries, especially those that go outside the American Astrology, but the war of aggression against our country remains the biggest barrier, and the more we progress towards military resolution, or The political solution, we are closer to the step of the world diplomatically opening up to Sana ‘ a “.

The sword of Jerusalem and the strategic transformation is limping Sabri to the last Palestinian intifada, considering that ′′ The battle of the sword of Jerusalem made an important strategic shift in the balance of the conflict with the Zionist entity, and we hope that He is being politically invested in future negotiations, especially since the enemy is experiencing a severe internal political crisis, and many settlers have left Israel according to the enemy’s flags himself.

Conversely, the unity of the Palestinian factions, its high ability to coordinate politically and military, and the deterrent ability of the resistance movements, all confirmed that after the battle of the Jerusalem sword is not the same “. he pointed out that the master Hassan Nasrallah gave Palestine victory in his last speech an added value and substance.

The protection of Jerusalem is the responsibility of the region and the axis of resistance, this means that the Israeli entity will not be able to take advantage of the Palestinians in the future, and we have known from the resistance leaders in their statements that coordination It existed between Gaza, on the one hand, Beirut, Damascus, Tehran, and Sana ‘ a, on the other hand, a variable that knows the enemy before its connotations, and reckons a thousand calculations before any future adventure.

Yemen, according to the Yemeni ambassador, has been an important actor in the equation of resistance, by the Zionists themselves, and I may not broadcast secretly if I told you that one of the strategic studies with the participation of generals in the enemy entity, recently honored the total war, and included Yemen within The third form of potential battle circles. He pointed out that the aggression against Yemen is undoubtedly serving the Zionist agenda, and the Emirates is an agent and servant of this project in Yemen and outside Yemen..

The Emirates had officially announced its withdrawal from the Yemen war, but it kept Her tools from local powers are working in the ground. On the other hand, Sana ‘a policy was dealt with on the basis that Saudi Arabia is the head of the snake in aggression, and that shattered the head is a guarantee of the rest of the body, but this does not prevent Sana’ a to discipline the Emirates again, and appreciating the situation under the decision of the Revolutionary Political Leadership, represented in Mr. Abdulmalik Houthi May God protect him, whose wisdom, courage and good management of the battle of endurance has led Yemen to this advanced site of honor, dignity, affirmation of independence and sovereignty, Yemeni Ambassador Abdullah Sabry ends his words.