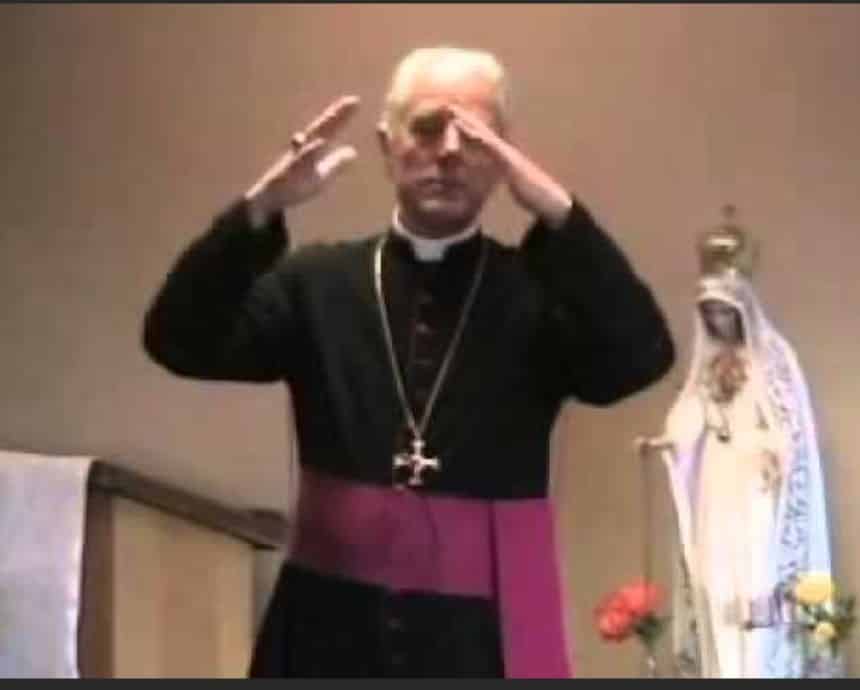 Author’s note: I will be interviewing Bishop Richard Williamson, who has been prosecuted, exonerated, and re-prosecuted for “Holocaust denial,” on my radio show today, 3 to 5 pm Central, on AmericanFreedomRadio.com.  The show will be archived here for free on-demand listening here within 24 hours.
Bishop Richard Williamson has been prosecuted for “Holocaust heresy.”

I used to believe in “the Holocaust.”

Not as a religion – I’ve never been to any of the museum-temples or made a pilgrimage to Auschwitz or pored over the sacred texts. And I never was stupid or crazy enough to accept the Holocaust as a valid excuse for the Zionist theft of Palestine.  (If the Holocaust had anything to do with Israel, then Israel would have been established in Germany – not Palestine.)

In short, I believed in “the Holocaust” as history, because I assumed that 99% of Western academic historians can’t be wrong.

I assumed that about six million Jews were exterminated by the Nazis in concentration camps, mostly in gas chambers, as part of a pre-planned effort to exterminate the Jews of Europe. As far as I knew, all of the reputable historians believed this. The handful of dissenters, I assumed, were cranks of one sort or another. And though I had met many Muslim academic colleagues who were Holocaust skeptics, I thought they were probably biased due to their anti-Zionism.

Then in 2006, out of the blue, for no apparent reason, I was attacked on Wikipedia as a “holocaust denier.” In fact, I was a well-known skeptic about 9/11 – not the Holocaust. I knew next to nothing about the controversies surrounding the alleged gas chambers.

Wikipedia claimed I was a supporter of David Irving, Mark Green, and Ernst Zundel. In fact, I had never heard of Green, and barely even knew the names of Irving and Zundel.  (I had spent most of the 1990s reading every French literary classic for my French Literature MA, then learning Arabic and studying Islam and Morocco for my Ph.D. while supporting my wife and two small children, so I wasn’t really paying attention to Holocaust-controversy news.)

I tried to correct the erroneous information – which came from some crank’s personal website, and had never been checked, much less corroborated – along with the dozens of other derogatory factual errors, on my Wikipedia page. The corrections would always be removed, and the lies, reinstated, by the next day. Sometimes it happened in a matter of hours.

This was enough to make me slightly paranoid.

But as the hippies used to say, just because you’re paranoid doesn’t mean they aren’t out to get you.

Somebody was trying to frame me as a “Holocaust denier” – presumably to damage my credibility on 9/11. Why would they do that?

By 2010 or so, I finally got around to reading a few books about the Holocaust controversies. The first book I read was Denying History by Michael Shermer and Alex Grobman. It had been recommended as the best introduction to why the Holocaust deniers are wrong.

Denying History blew my mind – but not in the way its authors presumably intended. It consists mostly of weak ad-hominem attacks against “Holocaust deniers.” Its arguments about the actual issues – the questions of pre-planned total extermination, cyanide gas chambers, and six million Jewish victims (or was that six million total victims?) – were not nearly as strong as I had expected. In fact, they were surprisingly flimsy.

Shermer and Grobman admit that the keepers of the Auschwitz memorial suddenly decided, one day in 1989, to reduce the number of victims of that notorious camp from 4 million to “about one and one half million.” That is a lot of victims to vanish so suddenly.
Shermer and Grobman claim that the suddenly-missing 2 1/2 million Auschwitz victims somehow magically re-appeared on the Eastern Front, where they turned out to have been shot down by German firing squads.

This maneuver preserves the seemingly magical “six million” figure. But it raises some obvious questions about the reliability of the death counts. First, isn’t the mathematics of “subtract-two-and-one-half-million here, add two-and-one-half-million there” just a bit too convenient?  Second, what about the forensic evidence? How can the remains of 2 1/2 million human cadavers have suddenly moved from Auschwitz to the Eastern Front? And third – if the orthodox Holocaust historians were that wrong about Auschwitz prior to 1989, what else might they be wrong about?

Shermer and Grobman downplay the issue of forensic evidence – because, it seems, there really isn’t a whole lot. Millions of people seem to have vanished without a trace. Instead, orthodox Holocaust historians rely on eyewitness accounts, not forensics, to establish the existence of mass-execution cyanide gas chambers and six million dead bodies. They say the bodies and skeletons were almost completely burned, so little or nothing remained. No point in looking for millions of bodies, you won’t find nearly enough.

On that point, the skeptics and the orthodox historians agree.

Denying History raised questions in my mind about the truth of what I had previously believed. It also, paradoxically, evoked my sympathy for the people the authors wanted me to despise. Just about all of them seemed like reasonably nice people. David Irving, Shermer and Grobman admitted, was a highly-qualified and accomplished historian who had suffered greatly, and even been imprisoned, for his sincerely-held scholarly opinions. David Cole, a young Jewish man led to “Holocaust denial” by his penchant for truth, had won a debate against the pro-Orthodoxy forces, including Shermer himself, on the Phil Donahue Show. The only way the forces of orthodoxy could win their debate with David Cole, it turned out, was by issuing death threats to terrify him into recanting.

Shermer and Grobham made me like David Cole, feel sorry for him, and despise the JDL terrorists who threatened to kill him if he didn’t pretend to agree with them.

Since Shermer and Grobman were such poor defenders of orthodoxy, I turned to Deborah Lipstadt, who had won a libel suit filed against her by David Irving. I assumed that anyone who could beat Irving in a history debate must have a rock-solid command of the facts. Her book Denying the Holocaust, I assumed, would put the deniers’ arguments to rest.

As I turned the pages of Denying the Holocaust, my astonishment gradually turned to fury. The book has nothing to do with history. It is one long hysterical polemic in favor of the author’s utterly unexamined a priori belief system. Lipstadt’s book consists of 100% emotion, zero percent rational-empirical argument about historical fact. It is basically an endless chain of mindless ad-hominem insults against the “holocaust deniers.”

If this was the best the defenders of Holocaust orthodoxy could do, maybe they didn’t have quite the airtight argument that I had assumed.

At this point, my faith in Holocaust orthodoxy was somewhat shaken.

Then one of my 9/11-skeptic acquaintances told me I should read Debating the Holocaust: A New Look at Both Sides by Thomas Dalton. I did – and found it was far better than the books by Shermer/Grobman and Lipstadt. Of course, it wasn’t really as neutral as the title sounded. Dalton obviously believed the holocaust skeptics had a better case than the keepers of orthodoxy. But at least he did try to elucidate the historical arguments, point by point. Though he did not convince me that the Holocaust skeptics were right, he successfully argued that the Holocaust controversy was a legitimate topic of historical debate.

I invited Dalton to join me on the radio to debate two defenders of orthodoxy, Roberto Muehlenkamp and Andrew Mathis, on my radio show. (Read about the show here, and listen at http://www.americanfreedomradio.com/archive/Truth-Jihad-32k-042410.mp3 ).
Then I met Nick Kollerstrom, author of the best book on 7/7, Terror on the Tube.

Dr. Kollerstrom, a Ph.D. History of Science chemistry specialist, was expelled from his teaching post at University College of London simply for publishing a scholarly article evaluating the chemical evidence for the existence of homicidal gas chambers during World War II. Those who expelled him threw in gratuitous insults, but refused to make any effort to dispute the facts as laid out in the offending article.

I got to know Nick, rambled all over London with him, and found I liked him and respected his intellect. His views were legitimate scholarly interpretations, not bigotry.

These experiences have led me to conclude that the problem isn’t Holocaust denial – it’s Holocaust history denial (HHD). People like Deborah Lipstadt, and the other keepers of Holocaust orthodoxy, irrationally deny that the Holocaust is history, and therefore open to free and fearless rational-empirical debate. For them, the Holocaust is emotion-saturated sacred myth, not history.

Western culture – not just a few keepers of orthodoxy – is suffering from HHD. Everywhere you go, it is denied that the Holocaust is just one unfortunate historical episode among others, and that the data can be interpreted and reinterpreted in a wide variety of ways. The sacred shibboleths – six million dead, cyanide gas chambers, and a pre-planned total extermination – are the new holy trinity. Anybody who doubts them isn’t just another revisionist historian, but a heretic.

And the heretics are sent to prison, or have their careers destroyed, simply for writing or speaking about their interpretations of historical data.

Nick Kollerstrom tells me that many thousands of people have been prosecuted, in Germany alone, under the “political correctness” laws. How can anyone possibly be a historian in a society that imprisons people for expressing their interpretations of history?
Holocaust history denial is a clear and present danger. The Western tradition of freedom of inquiry is under threat. Ever since Socrates founded philosophy, acerbic skepticism about “public myths” has been central to Western thought. Today, it can get you thrown in prison or ejected from your job.

It’s time to meet the threat of Holocaust history denial head-on. Let’s re-historicize the Holocaust, and put an end to the Holocaust Religion!

I propose that America’s top fraud investigators should be immediately assigned to the Holocaust survivors’ fraud beat. The recent discover of $42 million in phony “survivor” claims is undoubtedly only the tip of the iceberg; billions more are there for the taking. The money recovered from the “no business like Shoah business” shysters should be applied to the endowment of Holocaust Revisionism chairs in a dozen or so of our leading universities. There, the world’s top Holocaust revisionists should be turned loose to develop their very best historical arguments. A lively scholarly historical debate between the revisionists and the defenders of orthodoxy would ensue.

Who would win the debate? I have no idea. Maybe, with the debate reinvigorated, the orthodox camp would find the motivation to go out and look for the long-lost forensic evidence, including the ruins of actual mass-human-extermination gas chambers and the remains of millions of victims’ bodies. Or maybe the revisionists, given a modicum of legitimacy and funding, would definitively prove their case.

Either way, history – and the Western tradition of freedom of inquiry – would be the real winners.