Gosh, It couldn’t happen to a more deserving country

[ Editor’s Note: This could be the beginning of something. The Israelis, to counter this movement, will have to put ‘assets’ in play here, which means they have to expose themselves as such, which is alway just wonderful when they do that.

Cross your fingers that this will spread to other countries and their dock workers. The politicians in those countries will then also have to choose between Israel and their own unions. This could get very interesting.

I would suggest that this dockworkers union should get a lot of thank you calls. Despite the possibility of getting rid of having to listen to Bibi as PM, the new one is fully committed to taking over the West Bank and there never being a Palestinian state.

If the Zionist have the right to make the Palestinians stateless, then the work has the right of looking at putting Israel in a similar situation. The Israelis plan to impose their will with military and financial power, which hence gives the rest of the would permission to use the same tools. 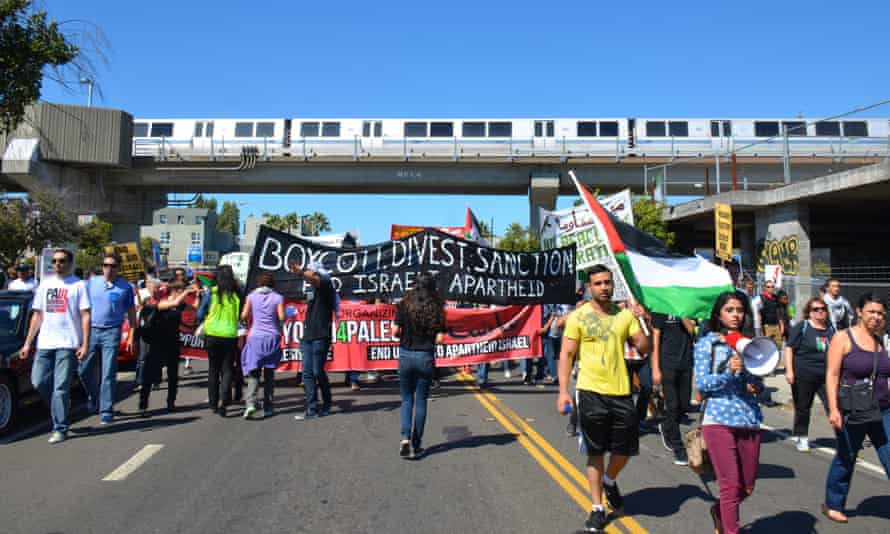 Dockworkers in the US Port of Oakland have refused to unload an Israeli cargo ship as part of an international boycott campaign against Israeli atrocities against Palestinians.

Pro-Palestine Americans protesting the Israeli aggression against Palestinians in the Gaza Strip banned the Israeli ship docked on Friday morning in the port of Oakland in California from unloading its cargo, forcing it to leave the US harbor.

In a show of solidarity with the Palestinian people in the aftermath of the Israeli aggression on Gaza, the protesters held banners and waved Palestinian flags in support of the movement to impose an economic boycott on the Israeli regime.

“Back up! Back up! We want Freedom, Freedom! All these Zionist attacks, we don’t need ’em, need ’em,” demonstrators chanted, calling on the Israeli ZIM-operated cargo ship Volans to leave port.

“We’re picketing an Israeli-operated vessel – ZIM Volans – it spent over 2 weeks out at sea, unable to dock, for fear of this exact protest. Now its here, while it’s here, we’re doing a community picket.” Wassim, @AROCBayArea #BlockTheBoat #ShutdownApartheid pic.twitter.com/lSMLbkzXos

“Our goal today is to show the city of Oakland that we do not want them to do business with and allow Israeli apartheid money to come into our city,”  Wassim Hage, a spokesman for the demonstrators, told reporters.

“It’s part of an international picket movement at port cities around the world that will be going on over the next couple of weeks,” he pointed out.

According to Hage, members of the International Longshore and Warehouse’s Union Local 10 were amid the picketers at the Port as “a huge show of solidarity between organized working people and the struggle for Palestine liberation.”

Following our victory against the Israeli ZIM ship this morning, the Bay Area is gathering again at Middle Harbor Shoreline Park in the Port of Oakland to keep the ship from unloading. As long as the ship is here, we will be as well! #BlockTheBoat #BDS #EndIsraeliApartheid https://t.co/wES9cnytBD pic.twitter.com/I8AOWMqA76

Pro-Palestinian demonstrators had prevented Volans from docking at Oakland’s harbor for more than two weeks after its scheduled arrival date.

Volans, which was apparently bound for Los Angeles according to an online schedule cited by electronicintifada, had attempted to avoid the anti-Israeli demonstrators.

“By refusing to unload Israeli cargo, Oakland workers are throwing a wrench in the Israeli economy and putting pressure on Israeli apartheid,” tweeted Jewish Voice for Peace.

In related news, dock workers in the South African port city of Durban refused to offload cargo from an Israeli container ship on Friday in solidarity with Palestinians and in protest against Tel Aviv’s hostilities on Gaza.

The Israeli regime started a 12-day war against the Gaza Strip on May 10.

As a result of the brutal Israeli aggression, at least 248 Palestinians were killed in Gaza, including 66 children, with more than 1,900 people wounded.