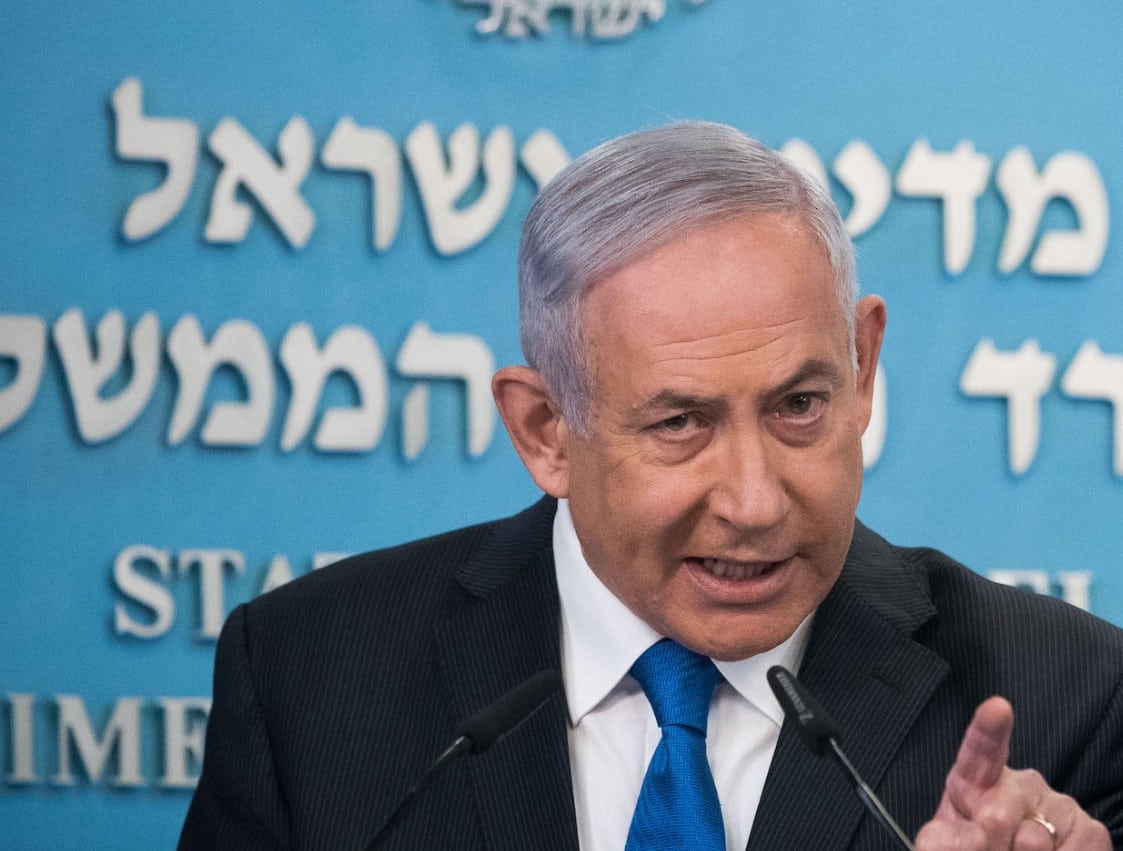 (JTA) — As Benjamin Netanyahu makes a last-ditch attempt to stay in power, even with a rival coalition set to take office, U.S. journalists and scholars are offering a dire comparison: Jan. 6.

In Israel, the political turmoil now seems eerily similar to what was happening in America prior to the insurrection at the Capitol that day.

Like Donald Trump, Netanyahu is trying to foil a democratic process that historically has been little more than a formality. Also like Trump, the prime minister says the new administration is the product of the “greatest electoral fraud in the history of the country.”

On Monday, Netanyahu’s Likud party claimed that the new coalition would be a “dark dictatorship” with laws “akin to the dictates of North Korea or Iran” because it will seek to institute term limits that could disqualify Netanyahu from running again.

Netanyahu, Israel’s leader for the past dozen years, has a loyal and passionate base that feels aggrieved and betrayed, similar to the former U.S. president.

One key difference: An event that would have gathered Netanyahu supporters for a potentially volatile rally was denied a permit on Monday.

Even as the head of Israel’s internal security agency, the Shin Bet, has warned of political violence, the leaders of the incoming coalition, Naftali Bennett and Yair Lapid, have tried to stress that democracy will take its course while condemning incitement.

But a left-wing member of their coalition, incoming Environmental Minister Tamar Zandberg, tied Netanyahu’s verbiage to that of Trump during the fraught presidential transition.

“I think it’s very similar to what Trump and his hate groups and supporters were doing in the time before the Capitol attack,” she told Politico in an article published Sunday.

Zandberg has borne the brunt of violent rhetoric from the extremist right. Last week, she and her family fled their home in Tel Aviv after receiving death threats. A fake notice of her death circulated on social media.

Meanwhile, other politicians have received death threats or faced protests outside their private homes that have been promoted on social media by Netanyahu allies.

Still, the Israeli transition is proceeding, albeit slowly.

On Monday, Knesset Speaker Yariv Levin, a Netanyahu ally, officially announced that the parliament would vote on the new coalition by June 14, though he did not set a date. With the coalition having the slimmest of majorities — 61 of the Knesset’s 120 members — Netanyahu is desperately trying to get one rival lawmaker to defect. His goal is to deadlock the Knesset into a 60-60 tie and prevent the new government from taking office. Thus far he has failed.

Meanwhile, a potential flashpoint for conflict appears to have been removed, as the Israel Police canceled a right-wing nationalist parade through the Old City of Jerusalem scheduled for Thursday. The march was denied permits amid fears that it would reignite violence just weeks after the conflict in Gaza, as well as the precarious electoral transition.

The parade, known as the Flags March, takes place annually on Jerusalem Day, which marks Israel’s 1967 capture of eastern Jerusalem — Israel subsequently annexed the area as part of its capital city. The march is meant to celebrate Israeli sovereignty over the Old City, and its route generally takes the mostly Orthodox Jewish marchers through the Muslim Quarter there. In past years, the march has featured racist chants, and Arab shopkeepers in the Old City have been advised to board up their stores while it is taking place.

This year, on Jerusalem Day, which fell on May 10, the parade was interrupted by rockets fired by Hamas launching 11 days of warfare between the terrorist group that controls the Gaza Strip and Israel. The march also took place amid escalating clashes between Jews and Arabs in Jerusalem and across Israel.

Last week, after organizers announced that the parade would be rescheduled for June 10, Defense Minister Benny Gantz, who is also part of the incoming coalition, advised that the route be changed. After refusing to OK the permit for Thursday, police did invite organizers to reapply with a new route or date.

Two Netanyahu allies, far-right lawmaker Itamar Ben-Gvir and May Golan, a Likud member, have vowed to lead the parade down the same route on Thursday anyway — with or without a police permit.

“We won’t give a prize to those Arab rioters and chicken politicians,” tweeted Golan, who compared her parliamentary opponents to “suicide bombers” on Sunday. “We will preserve our Jewish sovereignty in Jerusalem!”

Fears remain that tensions could still erupt in Jerusalem, parade or no parade. On Monday, Haaretz reported that Israel’s attorney general will not intervene to stop the pending eviction of Palestinian families from the eastern Jerusalem neighborhood of Sheikh Jarrah, making the eviction more likely. The pending evictions were among several contributing factors to the violence in Jerusalem last month.

(JTA) — Israeli Prime Minister Benjamin Netanyahu condemned violent rhetoric on “every side” of the political spectrum Sunday but also claimed that Israel’s incoming government, which will replace him, is the result of “the greatest electoral fraud in the history of the country.”

Netanyahu’s speech came as the head of Israel’s Shin Bet security service warned of a rise in rhetoric that encourages violence. A pro-Netanyahu lawmaker compared two of his rivals to “terrorists” facing a “death sentence,” and members of the incoming coalition have received death threats in recent days.

“Recently, we have identified an increase and severe exacerbation in violent and inciting discourse, especially on social media,” said Nadav Argaman, the head of the Shin Bet, which is roughly equivalent to the FBI in the United States. “This discourse could be interpreted by certain groups or individuals as permission to commit violent and illegal activity that could, God forbid, cause harm to human life.”

Last week, an ideologically diverse coalition of Netanyahu’s opponents declared that they would be able to form a government that would end Netanyahu’s 12-year run as prime minister, the longest in Israeli history. The coalition will have the narrowest of majorities in Israel’s parliament, the Knesset, and needs to be voted in before it takes office.

Netanyahu and his allies have been trying to persuade members of the coalition to defect and vote against it, which would deprive it of a majority. The vote approving the new government will be held on or before June 14.

In the days surrounding the announcement of the new government, right-wing groups have protested outside the private homes of politicians in the new coalition, and some lawmakers have received added security after receiving threats to their lives.

An open letter from leading right-wing religious Zionist rabbis published on Saturday night called on readers to “do everything so that this government is not formed.” Afterward, prominent signatories said that they were not condoning violence.

In addition, Israeli officials are weighing whether to allow right-wing activists to march in Jerusalem’s Old City on Thursday, in a parade that has previously featured racist chants. The parade was rescheduled for Thursday after having been interrupted by rocket fire from Gaza last month.

On Sunday, a lawmaker from Netanyahu’s Likud party, May Golan, compared two members of the incoming coalition to “suicide bombers:” Naftali Bennett, the incoming prime minister, and Gideon Saar — both of whom were Netanyahu allies before joining with his political rivals.

“Not at all to equate these things, but I compare them today to suicide bombers,” said Golan in an Israeli TV interview. “They’re like terrorists who don’t believe in anything, go out on their suicide mission, [and] even if they know they’re getting a death sentence, they don’t care.”

Earlier that day, in a speech to Likud lawmakers, Netanyahu publicly condemned violent rhetoric for the first time since the new government was announced. He claimed that he and his family had also received death threats, which he said weren’t treated with equal weight.

Immediately after saying that, Netanyahu claimed that the incoming government was the result of historic election fraud. And at the end of his speech, he said, as he has multiple times recently, that the new government “endangers the state of Israel in a way we haven’t seen for many years.”

“We are witnesses to the greatest electoral fraud in the history of the country, and in my opinion, in the history of democracy,” he said. “And so people feel, justifiably, very cheated, and they’re reacting to that. You can’t silence them.”

He added that “the commentators, the studios, and the whole absurd propaganda machine that has come together for their benefit — you don’t need to be afraid to go after them, my friends. Because that’s part of the fraud.”

Meanwhile, the heads of the new coalition are preparing to take office. Leaders of its eight parties, which span the political right and left and include an Arab-Israeli party, met on Sunday for the first time since their coalition was announced.

In a speech Sunday, Bennett called on Netanyahu to move on and let the new government take office. He condemned violence but also said that “not every opposition to the government is incitement” and that politicians need to “develop a thick skin.”

“It’s not a catastrophe, it’s not a tragedy, it’s a change in government — a normal event in any democratic state,” Bennett said. “I call on Mr. Netanyahu: Let go. Allow the state to move on. People are allowed to vote for a government even if you don’t lead it.”