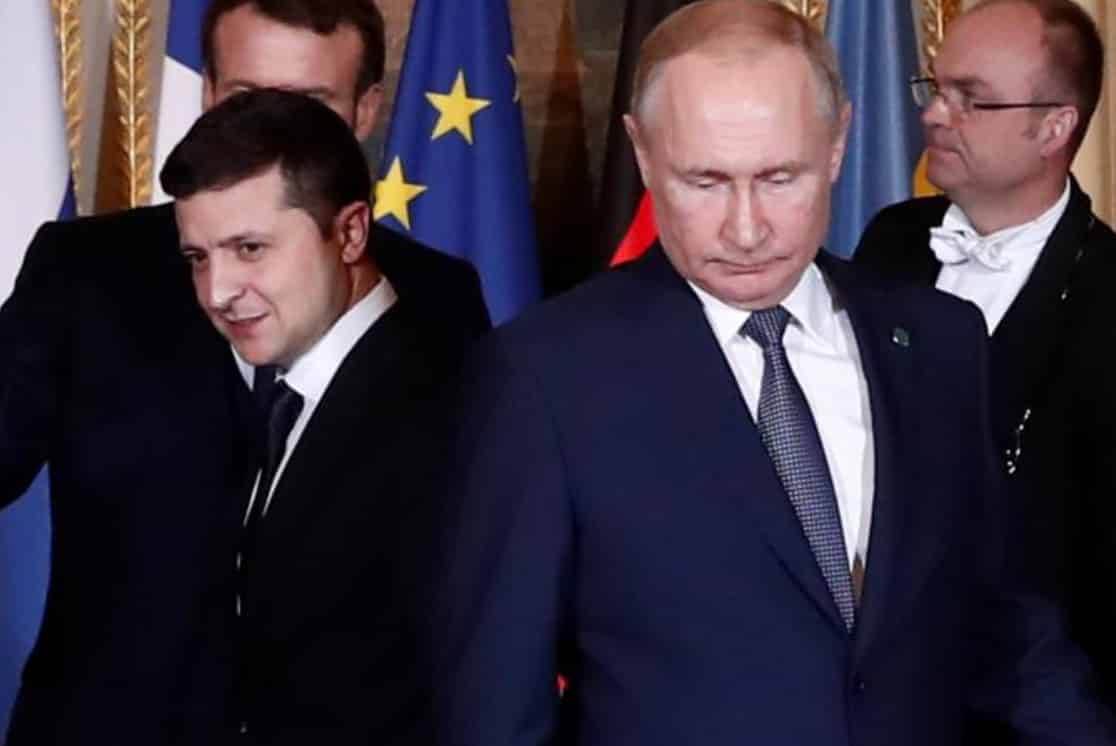 …by Paul Robinson, a professor at the University of Ottawa. He writes about Russian and Soviet history, military history, and military ethics, and is author of the Irrussianality blog

[ Editor’s Note: I found myself thinking that this was a satire piece, with talk about how Ukraine had been played and then dumped at the end. But as I went through what I would describe as fair presentation of the history, one huge mention was left out.

The author left out any mention, despite its huge amount of publicity, of the Ukie mobsters romancing our ex-mobster president to kept funding Ukraine so there is more hard currency to steal.

As for the whining of the Ukies on their loss of gas transit fees, which I would highly suspect that a lot of it would evaporate into thin air, Mr. Robinson only mentions the Ukies and the US not only stiffing Russia on the Minsk agreement year after year, but Ukraine participating in moving NATO up to Russia’s border.

Despite that, Russia, Germany and the EU have spent years building the land part of the Nordstream 2 distribution lines. But did idiot Trump, the now exposed phony billionaire, think he could twist the EU’s arm to buy expensive US LNG?

Ukraine did a dirty dance with the US in a violent coup with lots of death and destruction for which the US has blood on its hands forever, as does the witch ambassador we had at the time.

Ukraine walked the plank with its dirty dealings with Trump, and yes…I believe Biden has made an example of it to others. Even Obama was onboard the New Cold War program.

It is more than a little irony that Biden has let some of the air out of its tires, in what appears to be an attempt to face the US’ bigger long term potential economic threat, which is China… Jim W. Dean ]

VIA RT: Since 2014, the US has encouraged Kiev’s leaders to believe that it has their back, come what may. Now, as the Nord Stream 2 pipeline nears completion, the Ukrainian president is screaming betrayal as he realizes he was misled.

A while back, it used to be popular in some circles to play up talk of the “Putinsliv” – the impending sell-out in which Russian President Vladimir Putin was apparently destined to throw the rebels of Donbass under the bus and surrender them to the tender mercies of the Ukrainian government.

The irony is that, while Putinsliv never happened, the fury coming out of Kiev this week suggests that Ukraine itself has suffered a dramatic and unexpected “Bidensliv,” being sold out by US President Joe Biden.

Biden’s predecessor, Donald Trump, had a troubled relationship with the country, which he accused of trying to undermine his election campaign in 2016. Republicans also used the business dealings of Biden’s son, Hunter, in Ukraine to paint Trump’s Democratic opponent as corrupt. Consequently, Ukrainians generally welcomed Biden’s election as president and have viewed him as a much more reliable ally.

Until this week, that is. Now, things are looking a little different.

For the past few months, Ukrainian President Volodymyr Zelensky has been pressing Biden for a meeting. His position was that this should take place before Biden holds talks with Putin. Otherwise, the argument goes, the Russian and American leaders might stitch up Ukraine’s fate and then present Kiev with a fait accompli. Better that Zelensky gets to Biden first, they say, so as to forestall any attempt by the Americans to betray Ukraine to the Russians.

This, however, was not to be. Speaking to Zelensky by phone on Monday, Biden offered to host him in Washington later this summer, after Biden meets Putin in Geneva on 16 June.

`Apparently, the White House has decided that managing relations with Russia takes precedence over keeping Ukraine happy – a not unreasonable position given that Moscow has nearly 1,500 nuclear warheads in its arsenal, whereas Ukraine has not a single one. The safety of the world tends to focus the mind on what is really a priority.

In another blow to Zelensky, the Biden administration has finally given up its campaign to sabotage the Nord Stream 2 pipeline, which is designed to bring natural gas directly from Russia to Germany.

At present, Russia exports natural gas to the rest of Europe largely through an old Soviet pipeline system running through Ukraine, and pays Kiev some $3 billion a year for the privilege. Kiev fears that, once the new underwater link is up and running, Russia will be able to stop the supply of gas through the country, thereby depriving it of much-needed cash.

For this reason, Zelensky and his allies have been lobbying the Americans to prevent the pipeline from being finished. To that end, the Trump administration imposed numerous sanctions on companies involved in the project. Now, though, the Biden government has waived those sanctions on the main German company involved, in effect giving the pipeline a green light for completion.

This was little more than a recognition of reality: Nord Stream 2 was going to be completed no matter what America did. So it made little sense for the US to degrade its relations with Berlin any more than it has already.

Given a choice between the goodwill of rich and powerful Germany on the one hand, or of weak and impoverished Ukraine on the other, it was fairly obvious which one Washington would side with. The only surprise was that it took so long to work it out.

Adding insult to injury, Putin announced last week that the first section of the pipeline had been completed. This news provoked Zelensky into a mini tantrum. Speaking to the Axios news website, he complained that he was “confused” and “disappointed” by the American decision to waive sanctions on the project. He was “positive” that America could stop construction if it wanted, he said.

Zelensky was also angered by the fact that the Americans didn’t tell him about their decision, and that he had to learn about it from a White House press briefing. “How many Ukrainian lives does the relationship between the United States and Germany cost?” he asked.

The Ukrainian president’s comments reveal a remarkable naivety. It seems he truly believed both that the United States is all-powerful; and that the Americans would prioritize relations with Kiev over relations with Moscow and Berlin. Now he is learning the hard way that in international politics, as Thucydides said, “the strong do what they will, and the weak suffer as they must.”

If the episode acts as a wake-up call for Zelensky’s government, that will be a good thing. For too long, Ukrainian leaders have given the impression they are living in a fantasy world in which the West will in due course induce Russia to abandon any support for the rebellion in Donbass with a campaign of massive economic, military and diplomatic pressure.

This vision has manufactured an unwillingness in Kiev to make the concessions required to bring peace to Donbass under the Minsk II Agreement of February 2015, most notably the granting of “special status” to the provinces of Donetsk and Lugansk. As a result, it has played a major role in perpetuating the conflict in Eastern Ukraine.

To be fair to Zelensky, the Americans have done everything they can to encourage the fantasy that Russia can be pressured into surrender. As he notes in his interview with Axios, Biden had offered him “direct signals” that the US was prepared to block the [Nord Stream 2] pipeline.

This is plausible. It fits a pattern of behavior in which Washington has led Kiev’s ruling elite to believe it will have their back come what may, including in its efforts to ignore the Minsk Agreement.

Consequently, it is perhaps not surprising that Zelensky feels betrayed. The American government has misled Ukraine’s leaders into thinking that it will go the whole hog on the country’s behalf. To an outside observer, this was never plausible. But in the desperate world of Ukrainian politics, it may well have appeared otherwise.

Kiev’s bubble has long since needed bursting. To the extent that the Nord Stream 2 debacle has done that, it has paradoxically been a rather good week for Ukraine – no matter what Zelensky or his supporters may think.