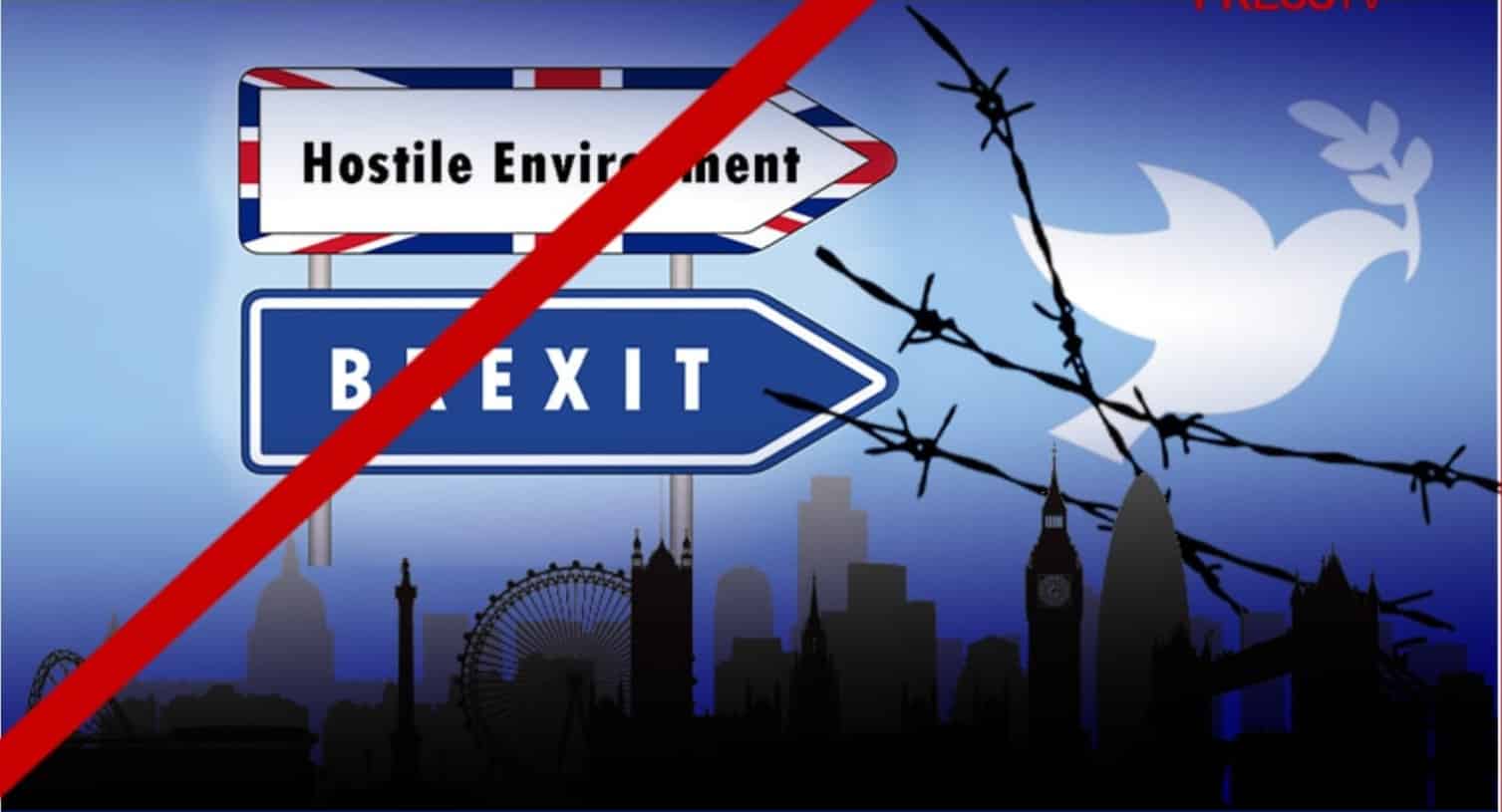 By Richard Sudan for Press TV

The climate of hostility towards migrant, immigrant and Black and Muslim communities in Britain, over the last few years has reached fever pitch.

Firstly, the advent of Brexit unleashed a particularly pernicious form of racism in Britain which, while always present, had to some extent been bubbling under the surface, forced underground for time after years of social struggle and demands for equality and racial justice.

Brexit became a green light for racists to target anyone who they perceived as the ‘other’.  Police statistics along with data from the UK Home Office shows a spike in racist attacks in the time preceding and following the vote, with expert analysts fearing the real figure to be much higher.  Brexit was essentially the UK’s make Britain great again, or Trump moment.

But make no mistake, this climate of hostility which had already been growing in Britain has continued and arguably become worse, under the ever more ‘hostile environment’ created by former Prime Minister Theresa May, and now continued mercilessly by Boris Johnson’s government and current Home Secretary Priti Patel.

But Home Secretary Priti Patel has overseen policies at the Home Office, vowing to continue to implement them at any cost, which for migrant communities are frankly terrifying.

The ‘go home vans’ which trawled through communities several years back, warning those whose status might have been uncertain to leave or face the long arm of the law, were like something from a dystopian Orwellian nightmare.

While on the one hand every nation has a right to manage immigration policy, the drive to intentionally send fear through migrant communities has played into a climate of racism which too many politicians are quick to exploit, and with devastating consequences.

For those on the receiving end it leaves them traumatized, after having already lived through traumatic experiences to get to Britain. Many immigration raids result in those who are detained, being held in what are essentially prisons, often in inhumane conditions and without the legal means to fight their cases. Many lawyers believe that far too many of those detained are wrongly deported, and should have had the right to remain in Britain with access to support, and should have had a fair hearing.

But, there is also a disconnect with how many in Britain sympathize with migrant and immigrant communities, and how the government ploughs ahead with its policies under the hostile environment.

Compare the two following scenarios. Recently, in Glasgow, Scotland an immigration raid took place by the authorities. But the local community came out in droves and demanded the release of those who were detained and shackled, and because of their strength in numbers, those detained were let go.

The other scenario sees Home Secretary Priti Patel actually attend in person a similar immigration raid which again saw those targeted hand-cuffed and detained in a sun rise raid.

Patel drew widespread scorn and condemnation for this stunt, accused of playing politics with the very real trauma that those migrants would have experienced while sensationalizing their misery.  In the wake of Glasgow, Patel has doubled down on what she argues is what the British people have voted for, despite many arguing that this assertion is simply not true.

As well as the ongoing controversial policies affecting migrant communities, the Windrush scandal still continues and is a stain on Britain’s conscience. Affecting several generations of those who migrated from the Caribbean between the late 40’s and early 1970’s, while also now affecting their children and grandchildren, Home Office failings, which were promised to be corrected and which have not, have again seen the wrongful detainment and deportation of individuals who had the right to live in Britain. There are countless examples, mostly from the Caribbean community but also from African communities where individuals were wrongfully deported to countries they had not seen since childhood, often for minor crimes for which the penalties had long since been paid.  In some cases some deportations led to the breakup of families, destitution, poverty and death.

Every juncture in the process to demand systemic change and also justice and compensation for those who have suffered has been a total failure.  So too have the demands for assurances that wrongs which have already taken place will not be repeated.

And now, because of the many examples of injustice facing migrant communities of all stripes, many EU migrants are also in fear of experiencing a similar fate, if through no fault of their own their statuses are also confused by the government and they find themselves on the receiving end of the notorious hostile environment. Reports have shown that the impact that these fears have on vulnerable communities is having the most detrimental effects on people’s lives.

The mental health of those being forced into the shadows, even if they have a right to live in the UK will take a serious toll.

Experts have also revealed that many who are concerned about the ability to remain in the UK are simply too afraid to even try to access basic health care for fear of being reported to the Home Office, despite the NHS being free at the point of use. Healthcare is of course a fundamental human right and should be free for everybody.

But the fact that there is such palpable fear among some in Britain to access it, and the fact that so many human rights are often disregarded when immigration policies are implemented shows how far behind Britain is, when compared with the image it likes to present of itself.

Pundit after pundit, and study after study, make great effort to argue that Britain is a welcoming and modern country.  But many feel that many government rules and policies are more akin to the Victorian era than any truly developed so called liberal democracy.

A society can only be truly measured through the lens of how it treats its most vulnerable.  And the way many migrant communities are currently treated in Britain is nothing short of a scandal.  And actually although racism and anti-immigrant sentiment is at an all-time high, we are also seeing millions of people fighting against the worst elements of the system, and demanding something much fairer.

Richard Sudan is a journalist, writer and TV reporter working for Press TV.