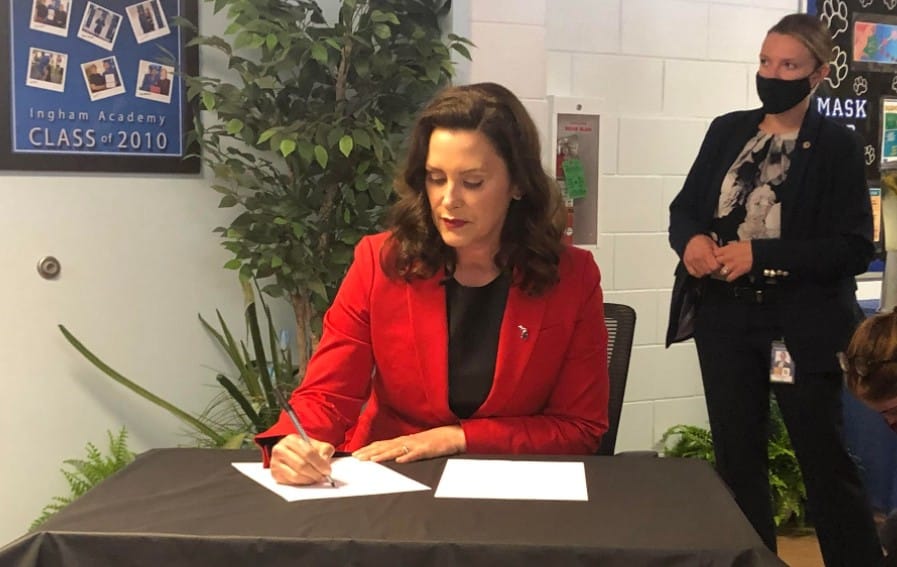 Michigan Gov. Gretchen Whitmer and other state leaders on Wednesday announced the creation of a task force to improve how the state handles young offenders, saying the juvenile justice system has been failing its children.

Whitmer created the Task Force on Juvenile Justice Reform and asked it to collect data from the state and its counties to better understand not only how Michigan treats juveniles who break the law, but how to reduce the number of young adults in the system and prevent them from entering it at all. Too many young people are incarcerated for noncriminal offenses, she said; a ProPublica investigation last year found Michigan does so more than almost any other state.

Grace, now 16, recently was inducted into the National Honor Society. “Your past does not define you,” she said in October. Credit:Cydni Elledge, special to ProPublica

“Grace’s situation was a complete and systemic failure of our juvenile justice system,” Lt. Gov. Garlin Gilchrist, a Democrat from Detroit, said. “Simply put, incarceration was the wrong response.”

ProPublica’s analysis of limited federal data found that Grace’s case was extreme, but not unique. Michigan children regularly are incarcerated for probation violations and other noncriminal offenses even as many states have moved away from doing so. On a single day in 2017, about 30% of the young people confined to detention and residential facilities in Michigan were there for noncriminal offenses, compared with 17% for the country overall, the analysis found.

At the time, Michigan Supreme Court Justice Elizabeth Clement pledged to work with leaders from the executive, legislative and judicial branches in the state to reform the juvenile justice system.

On Wednesday, Clement said the task force’s proposals “must be dictated by data and with the help of those most affected by the problems.

“Data will drive solutions and make sure all the partners in the system are accountable,” she said. “By working together, we can … keep kids out of detention and shut down the school-to-prison pipeline. Our first focus must be on keeping kids out of the system.”

Grace’s mother, Charisse, called the news of the task force “encouraging” and said she hopes it examines the state’s probation policies, racial disparities and the quality of court-appointed attorneys, among other issues.

“This should mean that youth currently in the system and all future children who are impacted by the justice system won’t fall under the same system of injustice,” she said. She also said the panel should include parents and individuals who “look like and understand today’s youth.”

Whitmer appointed a similar task force focused on the adult criminal justice system soon after she took office in January 2019. That group, which analyzed a decade of jail and court data, found that about half of all jail admissions resulted from probation or parole violations. The findings led to new laws this year that limit when jail can be used for adult probation violations and eliminate mandatory minimum sentences in certain cases.

The Michigan Supreme Court has also been reviewing other juvenile court procedures. Concerned that Grace had been shackled during a hearing, the court proposed a rule last year that would ban the use of restraints on juveniles during court proceedings unless there is a safety risk. The court held a public hearing on the proposal in March but has not decided whether to adopt it.

The court also announced that its administrative arm would review the procedures in Grace’s case, but nearly a year later has not issued a public report of its findings.

Jason Smith, executive director of the Michigan Center for Youth Justice, said that for years officials and advocates have been discussing appointing a group to address “long-standing issues” in the juvenile justice system. But he said that Grace’s case, as well as the death of 16-year-old Cornelius Fredericks after he was restrained in a residential facility, “placed a national spotlight on Michigan that served as motivation for state leaders to finally act.”

Smith said the task force should focus on ways to reduce racial, ethnic and geographic disparities among young people involved in the justice system.

“I hope that the outcome of the task force’s work ensures that no Michigan child youth experiences harm due to their justice system involvement in the future,” Smith said.