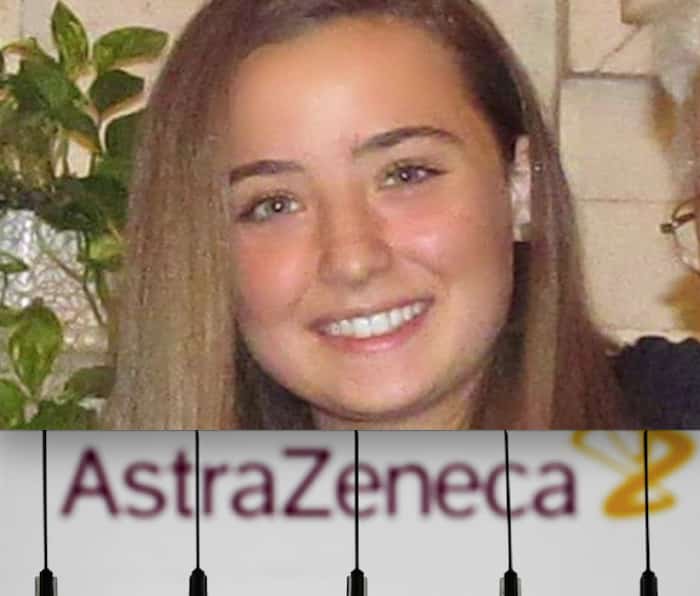 The tragic and untimely death of an eighteen-year-old girl from Liguria, which occurred due to a very serious cerebral hemorrhage from thrombosis about two weeks after the AstraZeneca vaccine, led Italy to block the administration of this inactivated virus-based serum to all under 60s.

The Technical Scientific Committee, in agreement with the Italian Medicines Agency and the Ministry of Health (which will soon adopt an ad hoc regulatory provision) has also recommended not to inoculate the second dose AstraZeneca, a British-svedish corporation, to young people who are waiting for it but to replace it with one of the available mRna vaccines, Pfizer or Moderna.

The storm in the Mediterranean’s Bel Paese  was triggered by the death of Camilla Canepa, an 18-year-old girl from Sesto Levante (Genoa) who had been vaccinated by joining the Open Day organized by the Region of Liguria to encourage the immunization campaign among young people .

The mystery of her death from a thrombosis, which fall within the possible “rare” serious adverse reactions recognized by British-Svedish Big Pharma of Cambridge itself, is deepened after the news of an alleged pathology of the girl reported by the Italian news agency Ansa was denied by family lawyer.

A splendid smile in a laughing face of youth. You are gone forever. Nipped after a vaccine against Covid-19 inoculated only for prevention and in compliance with that herd immunity that the pro-VAX scientific community hopes to achieve despite the changing variants of the virus, some probably triggered by vaccine resistance. Because so far in the whole world the teenagers who have died from the SARS-Cov-2 virus can be counted on the fingers of one hand.

Driven by political-media pressure, Camilla trusted the health system that approved AstraZeneca’s serum, based on a chimpanzee adenovirus vector (never used before in the history of pharmacology), on an experimental basis like all the other antidotes against Covid -19. Instead of going for the first sun bath on the Ligurian beaches, she participated in the immunization Open-Day which unfortunately was fatal. It will obviously be up to the judiciary to confirm the apparently macroscopic causal link …

Camilla Canepa, was admitted to the San Martino hospital in Genoa on Sunday 6 June with a very serious cavernous sinus thrombosis and consequent cerebral hemorrhage. Two weeks earlier, on May 25, the very young student from the high school of technology had received the AstraZeneca vaccine. After accessing the hospital in Genoa on Saturday 5 June (the second), Camilla had already been operated on twice on Sunday 6 June: first to remove the thrombus and then to reduce intracranial pressure.

But the situation of the very young ICU had remained tragically stable, in the gravity of her, and the observation period had begun to declare her brain death. The parents have authorized the removal of organs, five patients who will benefit from it. The Mayor of Sestri Levante, Valentina Ghio, announced the girl’s death.

After her death, the Scientific Technical Committee of the Italian Government decided to recommend the inoculation of the Astrazeneca vaccine only to over 60s and to reserve the for younger people – even those waiting for the second AstraZeneca dose – messenger RNA vaccines by Moderna and Pfizer. Although the latter, as reported by the lawyer Robert F. Kennedy jr on the basis of data from the VAERS pharmacovigilance system, has triggered undesirable effects, even fatal, in American adolescents who have been administered it for several weeks.

THE JUDICIAL INVESTIGATION ON DEATH

After the news spread by health care sectors about an autoimmune disease of the 18-year-old, the family intervenes with a laconic statement from the lawyer, categorically denying this circumstance. “Camilla’s parents trust in respect for their pain and their privacy … and she the girl she didn’t have any hereditary disease.” The lawyer of the Canepa family, Angelo Paone, said this, stating that “there is no official statement” from her parents.

“The Carabinieri OF NAS (Health Security – ndr) yesterday notified ASL 4 with an order to exhibit and seize the anamnestic certificate compiled by Camilla Canepa, the eighteen year old from Sestri Levante (Genoa) who died after the administration of the Vaxzevria (AstraZeneca) vaccine. The document, which is being seized in the ASL4 offices, will be delivered to the investigators on Monday. According to what has been learned, the prosecutor wants to verify whether hereditary thrombocytopenia was reported in the document, also mentioned in the documents already in the possession of the investigators or the intake of hormone-based drugs” writes Ansa.

The military investigators, delegated by the prosecutors Francesca Rombolà and Stefano Puppo together with the adjunct Francesco Pinto, went to the hospitals of Lavagna, where the young woman was hospitalized on June 3 and then discharged, and to the Policlinico San Martino, where she was declared dead. on June 10, to acquire medical records and all medical documentation relating to the case.

After the death of the eighteen-year-old, the magistrates changed the crime with which the file was opened, which went from “relative acts” to manslaughter against unknown persons.

The controversy remains strong in Italy on the correlation between thrombosis and the Vaxzevria vaccine, ascertained by a research carried out by the Oslo hospital and by the EMA itself which, however, had then authorized the continuation of the administration of the AstraZeneca serum despite the stop in various EU countries (Denmark, Holland and Norway) and the non-renewal of the purchase contract for the doses scheduled for 2022 decided by the European Commission in Brussels. Vaxzevria never has been approved in US.

As evidenced by Gospa News in Italy there has been great political pressure on this antidote against Covid 19 because it was created with the contribution of the Park Science of Pomezia (Rome) which produces the adenovirus vector of the chimpanzee on which the SARS virus is inserted- Cov-2 inactivated to trigger a genomic reaction in DNA and the consequent antibody response.

The Roman IRBM Park Science is a biotechnological research center of excellence repeatedly funded by the governor of Lazio Nicola Zingaretti, former secretary of the Democratic Party which developed in Italy the pilot projects of immunization on 12 vaccines for various school-age diseases promoted by Obama-Biden administration together with Bill Gates.

Vaccines: In Rome the Summit of Global Lies! EU & in Italy inside the Gates-Big Pharma’s Shady Affairs with Biden

Gates is in conflict of interest for investments in GSK (GlaxoSmithKline) which produces those serums but also controls the commercial network of the American multinational Pfizer, one of the main sponsors of Joseph Biden’s election campaign, and producer with the German BioNTech of the antidote against Covid-19 Comirnaty based on messenger RNA.