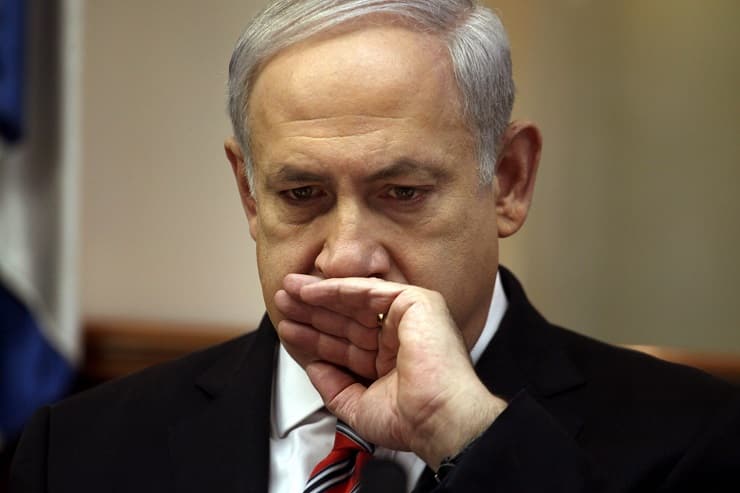 [ Editor’s Note: Bibi thought he was being cute with his impersonation of Arnold Swachnager, “I’ll be back”. More truthful and realistic was his threat the he will lead an opposition like Isarel has never seen, a classic Bibi boast.

Hopefully we will not have to hear any more about his brat kid, who made a fool of himself playing the a political wheel, the kid who has never had a job yet in his life, and does not seem to want one when he can play daddy’s little attack dog.

Mr. Bennet the new Prime Minister is a hard right uber Zionist who wants to take over all of the West Bank, so there will be no changes in attitude.

But the Arab party was given specific budget allotments to get them onboard, which it will use to show the Palestinians that they must gain a better position on step at a time. There is no magic button to press to have their wish list addressed.

Concurrently with this news was the IDF admitting that its ability to to defend from the Gaza rocket swarms was a failure, as was it attempts to kill a few thousand Hamas fighters in their underground positions, despite having ground penetrating munitions.

Hamas apparently had anticipating such an effort and play a sophisticate game of musical chairs so their people would not be in the places the IDF though they would be.

But the best news in of the talks of a Hudna, an Arabic term for a long term piece, like 20 to 25 years. That is a huge breakthrough to even have it on the table. Why now? All I can think off is that the IDF has decided that it does not want to drain military resources when they feel there are more serious threats from entities with real military power.

Sure, the IDF pilots, and artillery people like to get some live fire practice in during these flair up. But they also wear the shame of all the kids that have killed, a disgraced military by its own hand, and should always be reminded of it …Jim W. Dean ]

When I was trying to keep up with Israeli political news over the last month, the last thing I expected to see was a coalition of factions who beforehand would have had nothing to do with each other politically, other than being determined opponents.

The only likely political glue I could see that would account for the miracle was their shared hatred of Netanyahu to the point they would make a deal with their worst enemies to be rid of him. That now seems to have been accomplished as we approach the Sunday deadline for the Knesset vote on the new government Change Coalition.

Netanyahu’s ego gave him absolute faith in his ability to outmaneuver political opponents, including double crossing them whenever he felt it would be advantageous. Naftali Bennett gave Bibi a taste of his own medicine and he did not like it.

Leave it to an Israeli comedian to propose that Netanyahu should get the Nobel Peace Prize for his work in forging this 60 to 59 Change Coalition victory. It has held together so far, despite predictions that Bibi would use blackmail or bribery to win back one of the MKs to strip the End of Bibi Coalition of their slim majority.

That said, we will not know for sure until the Knesset votes on the Change coalition. Even one ‘absent’ member due to a contrived emergency could still rule the day.

And Bibi could be looking at a bigger loss than the Prime Ministership. By losing the Prime Minister office he will not be able to purge the judiciary and the police of all those who worked on his criminal cases, and thereby stop his triple bribery trial or any other future prosecutions.

Since the list of right wing MKs in the change coalition is a “who’s who” of former Netanyahu aides and appointees, one might ask how could he have let the defections happen? The answer lies in a trail of broken promises, where Bibi would promise the moon and deliver much less or nothing at all.

In US politics, this would be described as someone “burning up all of their political capital”. But currently Bibi’s Likud partners are chalking it up to a “wild hatred of the man”.

Liberman’s case is a good example. Bibi convinced him to run together which they did in 2013, but Bibi refused to merge the two parties as promised, so Liberman bailed out in 2014 and refused to make the same mistake twice in 2015.

In 2016 Bibi baited Liberman again with the prized defense ministry, but then proceeded to make key decisions around Liberman, humiliating him into quitting the post, just as Bibi had schemed to do. In the US, we would call such a person a political animal.

Liberman got his revenge in 2019, promising Bibi that he would join him in forming a government and then at the last minute left him at the altar when his mandate time expired. The ancient saying for this is, “Revenge is best served cold”, where one could say Netanyahu was a purveyor of counterfeit promises that could never be cashed in.

When the old tricks would no longer work, the ever crafty Bibi invented some new ones for the former election, like the rotating Prime Minster, with Gantz of course taking the second position and experiencing the Liberman treatment when Bibi crashed the government to force new elections. Gantz’s Blue and White Coalition got spread to the wind, with the angry former members hating him, but yet here some of them are in the Change Coalition.

Bibi’s planned trap for Gantz was in refusing to pass a state budget in 2020, which forced the last election in March. But the pendulum has now swung back where we see what was left with Blue and White with Gantz is in the current 61 majority, which if holds through the Knesset vote on Sunday will make Israel political history.

We are seeing that no one wanted to switch sides this time because Bibi had burned so many political bridges that his credit was dead. His political tombstone could read “Died by his own hand”.

The news reports from the Change Coalition showed that despite Bibi’s attempts to lure MKs back to the Likud Party with the usual promises, they fell on deaf ears. Despite having used up all of his credit, he kept calling MKs to wheel and deal to take them back.

Bibi even chased after Palestinian Mr. Abbas, reportedly with dozens of calls. Bibi claimed, “I am the only one that can lead this, all [the Change Coalition] promises are written on ice”, a Hebrew expression that the Coalition will leave him high and dry, and of course that remains to be seen.

“I believe in change, I want to do this together with you. I am the only one who can open a new page with the Arab community. My stature and the fact that my government will be a right wing government will allow me to do things they won’t be able to permit themselves to do.”

This was a well crafted response by Bibi. But fortunately we did get to hear from Abbas why he took a pass on Bibi’s offer.

“In the end, I reached the moment of decision and you ask yourself if you believe that the other side will actually carry out [their commitments], if there is good will, or not, because you can write any old thing down on the page…”We didn’t get everything we wanted” from the Change Coalition, Abbas said. He felt he could trust the Coalition more than Netanyahu.

Bibi was so desperate that he was even calling the husband of female MK Idit Silman, trying to entice him with offers of a good government job if he could get his wife to cross over. News traveled fast of Bibi’s desperation and the Change Coalition held tight.

In fairness, many in the Change Coalition had made promises that they broke when forming the current coalition, but these were before a government was formed where some political musical chairs can be expected with the voters.

As I am closing this out, Bibi has thrown out a new ploy that the Change Coalition is an election fraud, a trick he seems to have been borrowing from Trump and his claims of ballot rigging. But this last ploy has flopped, as Bibi’s definition of fraud was in his opponents breaking a promise not to change sides, a tactic he has always engaged in. It seems his bag of tricks is empty.

Are we really going to see Trump and Bibi going down in the same year?

Back in the US, our now rumored ‘dementia ex-president’ is claiming that he will be ‘reinstated’ as President in August, to the cheers of his delusional followers. And even worse, virtually all the Republicans in Congress are going along with the fantasy, scared to death of losing the Trumpster supporters, or being targeted with primary opponents.

Americans are seeing our political class for what it really is, where a large number are not there to serve the public but to foster their own careers, to the point of debasing themselves by giving support to Trump’s continuing fake claims.