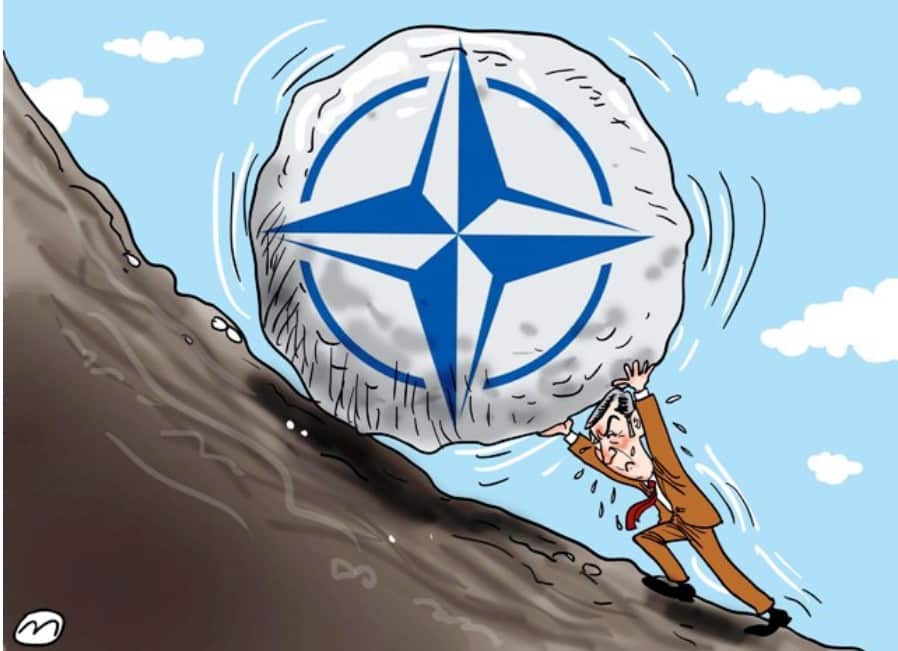 NATO is America’s military alliance against Russia and China — primarily against Russia, because at the start of the Cold War, the two nuclear superpowers quickly emerged to be U.S. and U.S.S.R.

If America blitz-nuclear-attacks Russia, as the U.S. Government’s “Nuclear Primacy” geostrategy ever since at least the year 2006 has envisioned to be the end-game in the Cold War (in order to ‘win’ that War, since a blitz-attacker has a vastly higher likelihood of winning a war, whereas a defender has no opportunity to plan in advance when and where to strike and no opportunity to obliterate the opponent’s defenses at the very start of the conflict and thereby to prevent retaliation — only a blitz-attacker can have such opportunities), then what countries will Russia nuke in return (if any of its retaliatory forces do survive such a blitz by America)?

All of America’s allies would likely be nuked, in response, though mainly the U.S. itself would be. However, European countries are nearer to Russia than America is, and therefore will be taking the hits from the shorter-range Russian missiles — more “bang for the buck” there.

All of the U.S., and all of Russia, could be totally destroyed, but America’s allies also would be. By being America’s ally, each other NATO-member-nation becomes a target for Russia to retaliate against in the event of an American blitz-attack against Russia.

Although America’s goal (since 2006) is a 100% successful blitz attack and 100% shielding of America from any possible Russian counter-attack, that’s not yet possible (and probably it can’t ever be): ‘winning’ a nuclear war between America and Russia would mean merely having the last person to die from the war.

This means that (in practical fact) the safest countries will be non-aligned ones — not allies of either side. In other words: NATO membership greatly increases a European country’s risk. That’s the actual fact.

However, by overwhelmingly high margins within each one of the NATO countries, the publics there believe exactly the opposite.

Here is from the “NATO Secretary General Annual Report 2020”:

The majority of Allied citizens (58%) continue to see NATO membership as decreasing the likelihood of attack by a foreign nation, with only 16% disagreeing with that statement. The graph below shows agreement with the statement “Our membership in NATO makes it less likely that a foreign nation will attack our country”:

Because the global center of the U.S.-and-allied permanent-warfare empire is the United States itself (the U.S. invented NATO to defeat the Soviet Union), the propaganda for NATO is more intensive in America than anywhere else.

For example: the 2017 Nobel Peace Prize winning organization ICAN headlined on 6 July 2018, “New Poll: Europeans Reject US Nuclear Weapons on Own Soil” and reported that “in [each of] the four EU countries that host US nuclear weapons [Belgium, Netherlands, Germany and Italy] … an overwhelming majority of people surveyed were in favour of removing the weapons from their soil, and for their countries to sign the Treaty that bans them outright.”

Consequently, if any of those nations had been authentically a democracy, then that nation definitely would not have U.S. nukes on its soil, and definitely would sign and ratify the U.N.’s ban against nukes. Europeans don’t want nukes on their soil, but do want NATO membership. By huge margins, they are that loony!

However, according to Gallup’s polling, even within the United States itself, an overwhelming majority (64% in 1995, rising to a peak of 80% under Obama in 2017 after America’s February 2014 nazi coup in Ukraine, which America’s ‘news’-media reported as having been instead a democratic revolution there that was being fought against by Russia) approved of NATO. (That’s a very carefully manufactured consent, within the American ‘democracy’.)

The ‘news’-media throughout NATO are constantly propagandizing for NATO. In all NATO countries, they are controlled by the same people who control Lockheed Martin and the other international corporations whose sales and profits are entirely (or nearly entirely) derived from selling (weapons) to Governments that are allied to the U.S. — not from selling to the public.

This is the U.S. regime’s boom-time for bomb-makers. See the trailer for the documentary about it, “Shadow World Trailer”, which summarizes how this system works. Corruption is the system’s core. The system works by corruption.

A fine book about the almost unlimited corruption in the world’s ‘defense’ industries, Paul Holden’s 2016 Indefensible: Seven Myths that Sustain the Global Arms Trade, states that, “NATO members, including the US, spent a total of $904bn in 2015, 53.9% of total military spending.5 Other countries that the US classes as ‘major non-NATO allies’, including Japan, Australia and Israel, accounted for another 10% of the total,” raising it to 64%. And those nations’ weapons-manufacturers sell also outside the U.S.-allied bloc. “Among these purchasers, for example, are some of the world’s poorest nations.”

That book’s Introduction asserted: “The arms business needs to be undressed. Every rotten item needs to be thrown out. Then, we will find, there is nothing left. The arguments [for governments’ weapons-purchases] are nothing more than myths.”

Essentially, companies that sell almost entirely to governments hike their profits enormously by controlling their markets by buying-off politicians, since those politicians essentially control those huge buying-decisions.

Instead of democracy, there is dictatorship in these countries: it’s imperialism internationally, and fascism nationally. A reader of that book summarized at Amazon what he had learned from it, by headlining “The world really is run by psychopaths” and saying:

“One of the things that came across from this book was that the elite class simply doesn’t consider the rest of us. They talk to each other and deal with each other and give each other presents – of arms – in order to signify and qualify for status. They also buy and sell arms, and it’s the biggest business on earth. It is also a major emitter of carbon gases, yet never included in measures to reduce carbon emissions – so why would you take global emissions talk seriously? Official reasons for war are almost always lies; war is about business.”

Behind all the “reasons for war” stands the aggressor’s craving for conquest. On 31 May 2021, Valery Kulikov headlined at “NEO Journal,” “US Actively Prepares for War with Russia”, and described (and linked to) three recent U.S. and UK articles about U.S. and UK plans for a modern equivalent of Hitler’s Operation Barbarossa invading Russia, but each article pretended that this would be ‘defense’ against Russian ‘aggression’.

The three articles headlined “US Navy SEALs are training to fight on land and water in a ‘strategic location’ near Russia”, and “Russia Is Scared: America Has A Secret Plan to Attack Kaliningrad”, and “British Carrier Joins U.S. Amphibious Forces In North Atlantic In A Vision Of What’s To Come”. Supposedly, this was ‘defensive’. That’s how the regime’s media present it.

In other words: European countries are getting highly misleading (pro-NATO) ‘news’-reports and commentaries. Those ‘news’-media are pretending that, ever since 1991 (when the Soviet Union and its NATO-mirror military alliance the Warsaw Pact ended), Russia has aggressed against vastly more countries than America has. In fact, America, ever since the end of World War II, has done dozens of coups, starting in Thailand in 1948.

How many did the Soviet Union do? How many has Russia done? And America has also done vastly more invasions, and also vastly more sanctions and economic blockades. Europe is, in fact, allied with the most aggressive nation in the world. That makes Europeans safer?

In the event of a war between the U.S. and Russia, the safest nations will be the nations which are not involved in that war. If you are America, then it might be smart to have continued NATO after the Soviet Union ended; but, if you are any other member of NATO, then staying in NATO was smart only for your weapons-manufacturing corporations, and was exceedingly stupid for all the rest of your population, because staying in NATO makes you a target for Russian retaliation if America blitz-attacks Russia, as the U.S. regime intends to do.

The ‘news’-media shape the public’s perceptions. Europeans are profoundly deceived. Though they don’t want nuclear weapons on their soil, they nonetheless believe that they ought to be allied to the world’s most aggressive nation, which continues the Cold War after the end of the Soviet Union. The sheer stupidity of this is awesome, but it’s the sort of thing that “manufactured consent” refers to.

Investigative historian Eric Zuesse is the author, most recently, of  They’re Not Even Close: The Democratic vs. Republican Economic Records, 1910-2010, and of CHRIST’S VEN