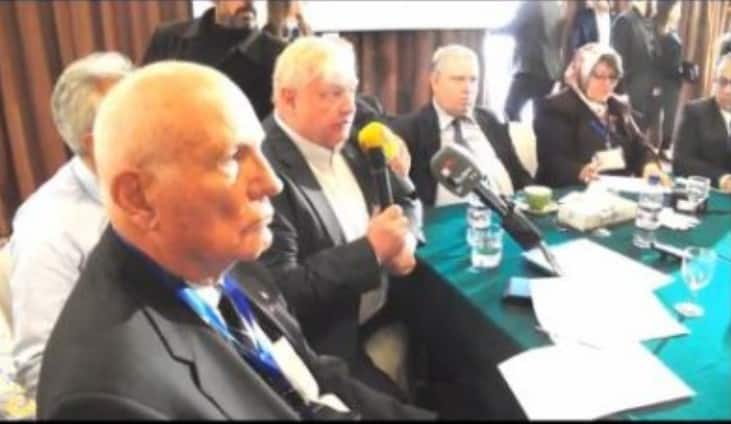 There are hundreds more, equally as funny.  I wonder where these people are today?

The Syr­ian government’s Coun­tert­er­ror­ism and Reli­gious Extrem­ism Con­fer­ence featured remarks by American anti-Semitic conspiracy theorist Gordon Duff during which he described the U.S. as being controlled by Israel.

Senior editor at Vet­er­ans Today, a web­site that presents anti-Semitic con­spir­acy the­o­ries as news, Duff described himself as the “U.S. Keynote Speaker” at the conference. During his remarks, Duff told his audience that “I do believe there are areas of misunderstanding [about] how the United States works politically…It’s very difficult to understand what has happened as far as Israeli control of American politics, and I will, as succinctly as possible, I will explain this to you.”

Duff also elaborated on the VT delegation’s objective while in Syria, stating, “It’s our goal here while we are here to try to establish a method of communication that will allow Syria and other nations in the area to understand Israel’s control of the U.S., the control of the U.S. by organized crime, and how the U.S. government is subservient to a worldwide criminal organization.”

Duff also invoked conspiracy theories about Jewish control of the U.S. government, claiming that the Supreme Court case Citizens United v. Federal Election Commission “turned control of the Congress of the United States over to human traffickers, narcotics traffickers, and particular the most powerful individual in the United States today, a gambling boss named Sheldon Adelson, an Israeli citizen who fled the U.S. living in Macau.” Duff alleges that Adelson “spent over one billion dollars in the last election and bought control of both houses of Congress, now Senator John McCain, the father of al-Nusra, the father of ISIS, will be running U.S.  legislative and military foreign policy.”

Without specifying about whom he is speaking, Duff also states in his remarks that “their motivation is largely economic, they’re a criminal organization but they’re part of a worldwide criminal organization and they’re here in your territory taking your things, your factories, your lives, your people, for the enrichment of a very specific group of people who need to be held to account…”

Duff, who describes himself as “one of the top global intelligence specialists” and one who “regularly consults with governments” also claimed that Syrians have him to thank for preventing the U.S. from bombing Syria after “false-flag gas attacks near Aleppo.” He continued, “It was our organization here that supplied the intelligence that stopped those attacks.”

The con­fer­ence in Syria, held on Novem­ber 30 and Decem­ber 1, brought together rep­re­sen­ta­tives from 25 coun­tries with Syr­ian gov­ern­ment offi­cials who report­edly harshly crit­i­cized the U.S. led anti-ISIS coali­tion and sug­gested an “Inter­na­tional Coun­tert­er­ror­ism Forum” be estab­lished in Dam­as­cus instead to deal with this issue. Syrian Prime Minister Wael Nader al-Halqi and Justice Minister Najm al-Ahmad also spoke at the conference. Duff describes al-Ahmad as being “extremely helpful” in bringing the VT group to Syria.

Four of the eight Americans  who participated in the conference were from VT, including Jim Dean, a man­ag­ing edi­tor for Vet­er­ans Today who has made claims of Israeli con­trol of Amer­ica, Colonel Jim Hanke who claims to be a former military attaché to Israel, and Mike Har­ris, who has ties to mem­bers of the neo-Nazi National Social­ist Move­ment (NSM) and has claimed that Zion­ists are respon­si­ble for a num­ber of mass shoot­ings in Amer­ica.

UNITED STATES of America  –  It can now be reported that Ambassador Leo Wanta is being coerced and blackmailed by Adamus Group and Nazi Jew, Bush-Clinton Crime Family Syndicate stooge Gordon Duff of VeteransToday.com (Adamus Group).

We can now divulge that Adamus Group has been directly fingered by the Joint American-French Intelligence Task Force as being tied to the Israeli Mossad and the Office of Naval Intelligence (ONI) infiltration and orchestration of terrorist al-Qaeda cells in the nation of Yemen aka Nazi Paperclip Adamus Group headquarters that created the illusion of terrorist threats that then forced the close down of U.S. and other western embassies across Africa.

Reference: It was Albert Gore Jr. that helped elect Bill Clinton as President in 1992, who was deep in 3rd place vs Ross Perot and then President George Herbert Walker before Albert Gore’s Vice Presidential nomination sealed the deal.

Message to Duff: It is in your best interest to cease and desist NOW!  Do you get it!

Reference: Wanta’s credibility is now in question (I have been dealing with him since 1995, and it was myself, Tom Heneghan, and then Vice President Albert Gore Jr. that saved his life in Syre, Oklahoma).

Wanta is now associating himself with Israeli Mossad asset and Adamus Group terrorist Gordon Duff of VeteransToday.com, who now claims he has Leo Wanta’s back.

Direct message to bitch Duff: Your back is ass backwards and once again: CEASE AND DESIST NOW!

P.S. Last night as the Israeli Mossad-controlled U.S. media continue their FALSE FLAG terrorist propaganda I called Wanta and said that we have no choice but a revolution (as Thomas Jefferson would clearly order now).

Wanta then said that is unacceptable.

Wanta and I then exchanged vulgarities with each other in which I described the alleged U.S. intelligence community in general as rotten Nazi Paperclip thugs, along with the NSA, have eradicated the U.S. Constitution and our American Republic.

In closing, a massive financial crisis is imminent with JPMorgan and Goldman Sachs, along with the criminal privately owned U.S. Federal Reserve, unable to create liquidity in the world financial markets because of their ass backwards derivatives tied to the Central Bank of Japan.