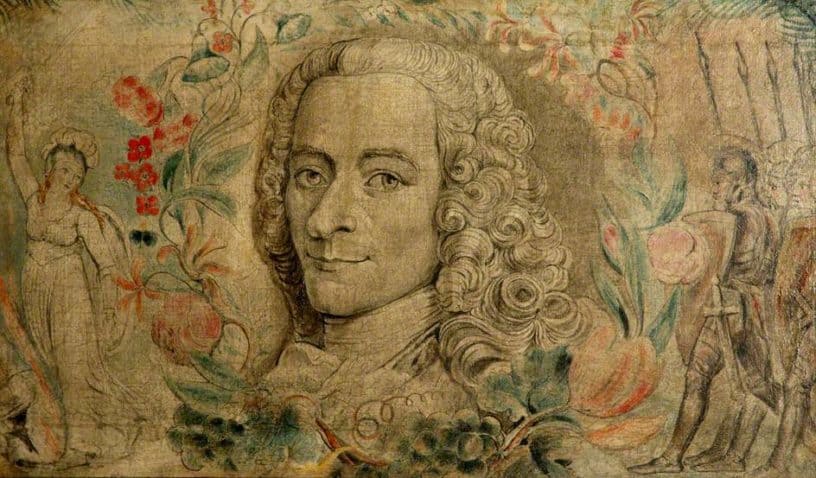 The French Revolution and its bloody aftermath clearly indicated that the West ultimately faced two opposite but powerful worldviews: Logos and anti-Logos.

Anti-Logos is diabolical worldview which is based on the rejection of anything rational, docile, and orderly in the universe, and that worldview is at war with Logos and those who ally themselves with it. This ideological and cosmic war, which historically began at the foot of the cross, will continue until the end of history, and we just happened to be in middle of this war.

Moreover, anti-Logos has a long list of devoted disciples, and Voltaire, sad to say, was on the anti-Logos camp, though he said some rational things here and there.

Voltaire was a Freemason. We know this because he was initiated into the Nine Sisters Lodge of the Freemasons. After he made that move, the chairman of the lodge made a speech with respect to Voltaire’s initiation, saying,

In other words, according to the chairman, Voltaire’s revolutionary ideology was consistent with Freemasonry even when Voltaire was not aware of it. In fact, Voltaire constantly received positive accolades from the Lodge.[2]

Because Voltaire, according to Will Durant’s own assessment, was weakening the Church’s political power.[3] And this was fully congruent with the Masonic lodge. Some, like Jacques-Rene Hebert, “followed Voltairean rationalism, encouraged the desecration of churches, and set up the public worship of the Goddess of Reason” by 1793.[4]

Freemasonry seems to have lain dormant after the French Revolution among intellectual revolutionaries, but it got its reprisal in the twentieth century—this time during World War II. One individual who was doing research on this very subject was noted French historian Bernard Fay.

Fay was educated at Harvard, became a professor of history at College de France, and eventually became the general administrator of the Bibliotheque Nationale.

Fay began to search the archives in order to give a detailed account of Freemasonry and how it was largely the backdrop of the French Revolution. Not only that, Fay saw that Freemasonry was having a come-back in his own time. Fay was what one might call an “archivist,” that is, he believed in documented evidence.

Fay’s account here is taken from Barbara Will. Building her argument from Jacques Derrida’s premise, Will faults Fay for what Derrida called “archive fever.”[5]

Summoning Derrida to build her case proves to be detrimental to Will’s cause, because Derrida did not believe in objective truth. For Derrida, archives can never lead to truth—on the contrary, archives “work against stable or positivistic knowledge or historical meaning.”[6]

“The archive,” Derrida tells us, “always works…against itself.”[7] If they always do, then why do we have them? Well, for Derrida, archivists are compulsively “sick” because they seek knowledge in archives.[8] Once again following Derrida’s premise, Will writes,

“And as someone who staked his entire career on archival knowledge, Bernard Fay also succumbed to the fever that would work against this knowledge, leading his career down ever more paranoid and delusional paths.”[9]

The only way that Derrida could come up with these ridiculous ideas was because he was following the ideological tenets of postmodernism, which is Jewish in its ideological orientation. As such, he had to dismiss any document that might lead one closer to the truth.

As Jones puts it, “Political correctness was the final expression of the Talmudic redefinition of American discourse which had begun in the ‘70s under the direction of Jewish critical theories like [Stanley] Fish and Derrida.”[10]

After Derrida delivered a lecture at Johns Hopkins University on deconstructionism, postmodernism began to take shape not only in academia but in culture as well. Lawrence D. Kritzman, Brian J. Reilly, and Malcolm DeBevoise tell us,

“With this paper [La structure, le signe, et le jeus dans le discourse des sciences humaines] the incipient movement was effectively launched: for the first time the elements of the poststructuralist program were laid out as part of an inquiry that was utterly different from the one that had prevailed under the name of structuralism in the strict sense.”[11]

Derrida was a revolutionary, and he made no apology when he wrote:

“It is true that my interest in literature, diaries, journals in general, also signified a typical, stereotypical revolt against the family.

“My passion for Nietzsche, Rousseau, and also Gide, whom I read a lot at that time, meant among other things: ‘Families, I hate you.’ I thought of literature as the end of the family, and of the society it represented, even if that family was also, on the other hand, persecuted.”[12]

Literature, then, was for Derrida a weapon with which he could attack ultimate truth. He put it quite bluntly:

“If the philosophical question seemed at least as necessary to me, this is perhaps because I had a presentiment that there could be sometimes an innocence or irresponsibility, or even an impotence, in literature.

“Not only can one say everything in literature without there being any consequences, I thought, no doubt naively, but at bottom the writer as such does not ask the question of the essence of literature.”[13]

If postmodernism/relativism is true, then there is no need for historical scholarship, for any “text” is relative to all other “texts,” though they may pronounce completely contradictory statements.

Furthermore, since no ultimate truth exists in the end, one statement is as valid as another. Consistent with this frame of mind is the idea that there is no need to sift fact from fiction, truth from error; astronomy is no better than astrology, chemistry is no better than alchemy.

Will would have made a much more historically rigorous point had she not relied on Derrida’s self-defeating philosophy to draw some of her conclusions. As Professor R. V. Young of North Carolina State University put it, “Rather than a frontal assault on metaphysics, Derrida proposes subversion from within.”[14]

Similarly, late French philosopher Maurice Blanchot implicitly argued that Derrida’s Deconstructionism is rabbinic in its ideological orientation. This led scholar Sarah Hammerschlag to say, “This rabbinic reading could be intended to remind Derrida that he may be closer to Judaism that he would expect.”[15] Hammerschlag moves on to declare that

“Judaism, as it signifies in modernity, develops a particular political and ethical importance in his thought: it appears as one of the key sites through which he highlights his concerns with the problems of negotiating between political/philosophical claims to universality and structures of exclusivity…being Jewish becomes the very site at which the very possibility of such an opposition can be deconstructed.

The interesting observation is simply this: the thought-police of this world have never accused Voltaire of being an anti-Semite! In his novel Candide, Voltaire didn’t hesitate to have the main character being swindled by Jews.

Candide, Voltaire wrote, “had been swindled so many times by Jews that all he had left in the end was his little farm.”[17] In the course of the novel, Candide himself had to kill a Jew by the name of Don Issachar.

The simple fact is that no one has yet to accuse Voltaire of being an Anti-Semite. Yet people like Immanuel Kant have been universally denounced as vicious anti-Semites[18] for saying basically the same thing that people like Voltaire were writing about.