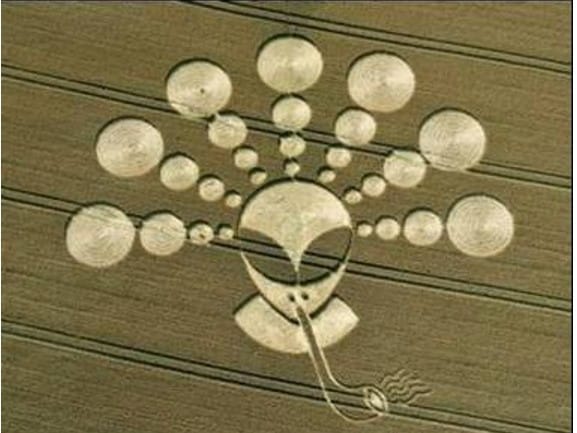 How ever Parinimmitha Wasavarthi Maraya is having less control over harmless and more Spiritually advanced due to meditation as per buddhist philosophy lokas (planet groups) belonging to Thawathisaya, Thusitha, Chathur maha rajikaya which are under

Most Dangerous and evil Kama Divyaloka 6 Planet Groups under Parinimmitha

Wasavarthi Maraya is Highly Technically advanced Parinimmitha Wasavarthi, Nirmanarathii, Yama where as they trap all to do wrong doings (akusala) with attachments using Eye (Chakku) , Ear (Shrotha) , Nose (Ghana), tongue (Jivha), Body (Kaya), Mind (Mano) which make 28 cosmic energy particles to make various kinds trillians of countless combinations  of life in this endless countless galaxies belogs to 31 planes (Thala). More and more wrong doings with attachments the number Cosmos of galaxies increase, some get destroyed. Out of this 31 cosmo galactic planes, which each plane having number of galaxies, 1 to 16 planes belong to Parinimmitha Wasavarthi Maraya and interconnected similar to a Web network. 17 to 31 planes Parinimmitha Wasavarthi Maraya has no control whats ever as 17 to 31 planes beings Brahma Deviyo born due to 99.99999% Buddhist Philosophy meditation efforts of cosmic particles detachment process.

Rest of the surviving was destroyed, and being gradually  destroyed by his agents which is called Jews, Indian origin Hindus, Indian Origin Tamils, Muslim Communities and most dangerously by white civilization which is called western countries. Now they are controlling  and also currently destroying the surviving old human origins of East Asian Buddhist Countries  and China & Japan also black africans. Parinimmitha Wasavarthi Maraya doing so by controlling  of the mind thoughts of dangerous so called human race where as they are agents of Parinimmitha Wasavarthi Maraya pretending there are no species in this universes no UFO’s and so on.

Other two human planets other than planet earth are technically and spiritually advanced than planet earth. They have frequent contact with Naga Lokaya via UFO’s which is under the deep sea mainly under North America and some deep large lakes. They avoid current majority of evil earth human population. 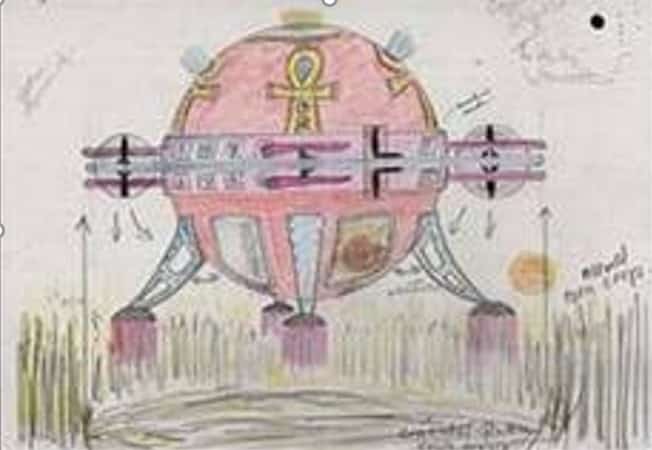 Sketch of a “spaceship” creating crop circles, sent to UK Ministry of Defence circa 1998.

All the planets of galaxies of Wasavarthi Maraya loka are using Poya (Moon Calander by multiplication factor as the life period is long.) note: Our Moon rotating on earth is a unique mainly artificial moon much more older than earth.

One Moon day is one month in earth.

On this earth Poya (Moon) Calendar was used in ancient times but 2021 years back started using a calendar called Christian Calendar. The issue is 4 poya days of the month was a meditation day and positive cosmic energy being generated due to this. All so called kama divya loka and brahma divya loka Thala beings are born from this. Stopping this happening in most important Jumbu Dveepa earth is a huge issue as the moon circles around the most important Jumbu Dveepa earth. Also there are other issues as access of Nuclear weapons and so on. 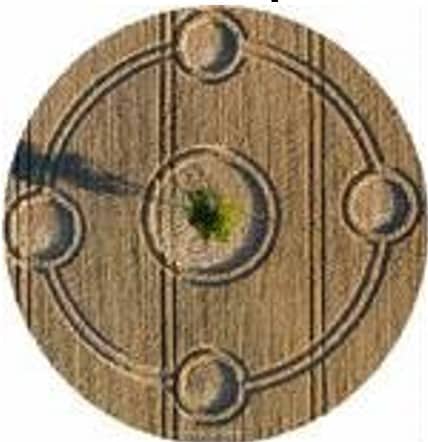 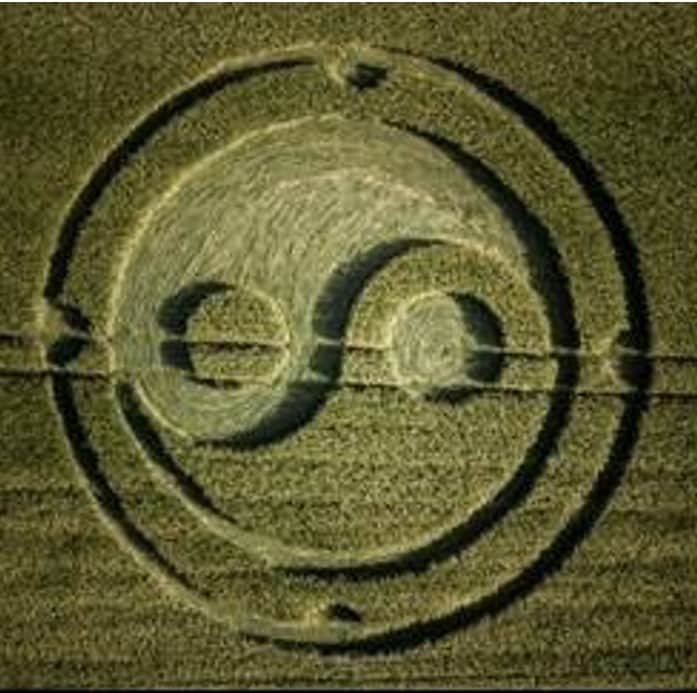 Note: Wasavarthi Maraya loka (kama Divya Loka)  Parinimmitha Wasavarthi, Nirmanarathii, Yama has given the rotation pattern of planets in our galaxy and other galaxies with large amount of crop circles to show that the rotation is in accordance and linked with our moon rotation of our planet earth and the sun. So called space Scientists either cannot understand this or they are ignoring the warnings. 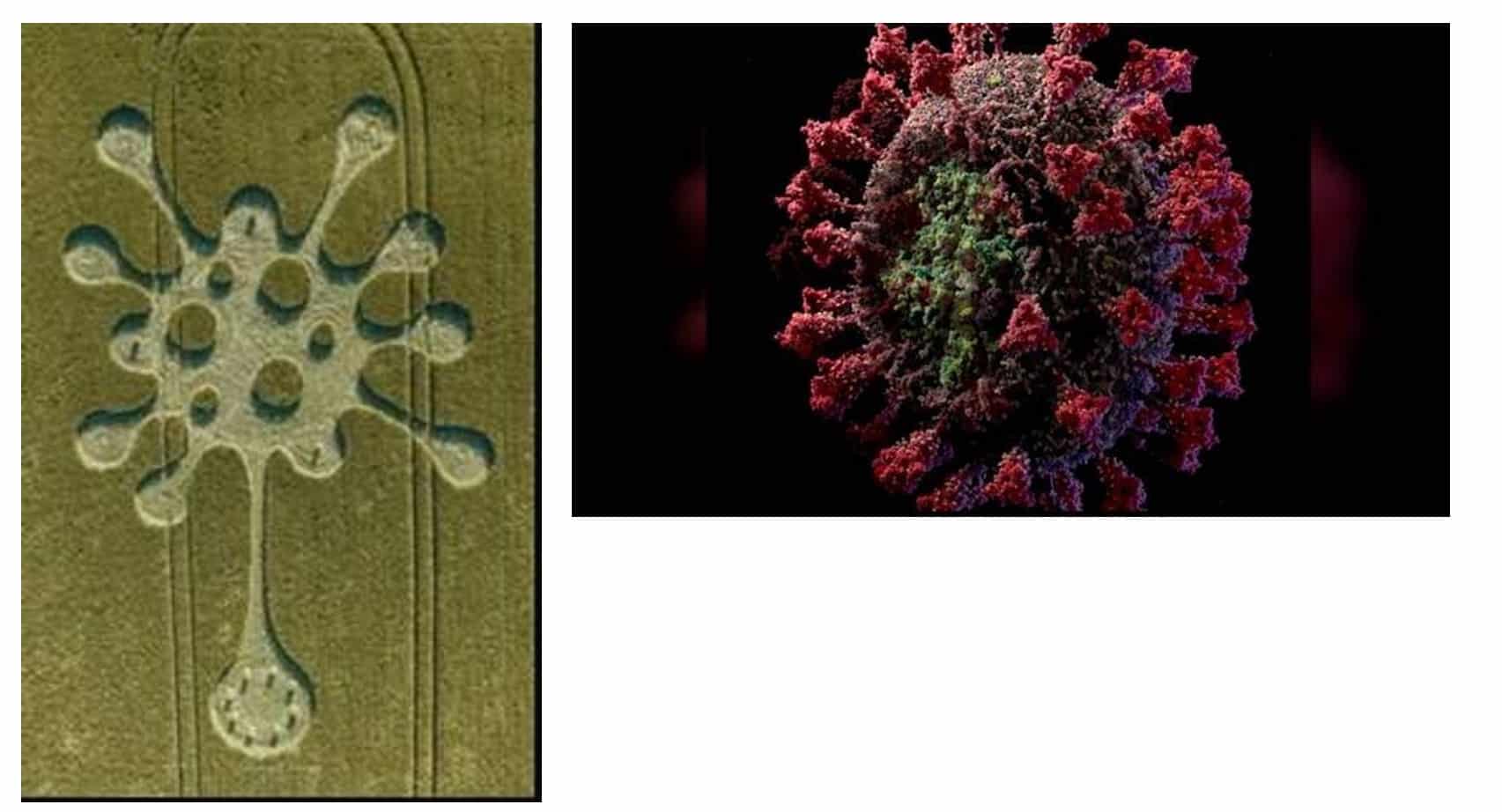 A warning Crop Circle on left showing Covid 19 Corona RNA virus (right) to eliminate unwanted humans from earth. (note: earth all lives are limited only to another 2300 years only). One of the ways of Loka vinashaya – Wasangatha Roga) 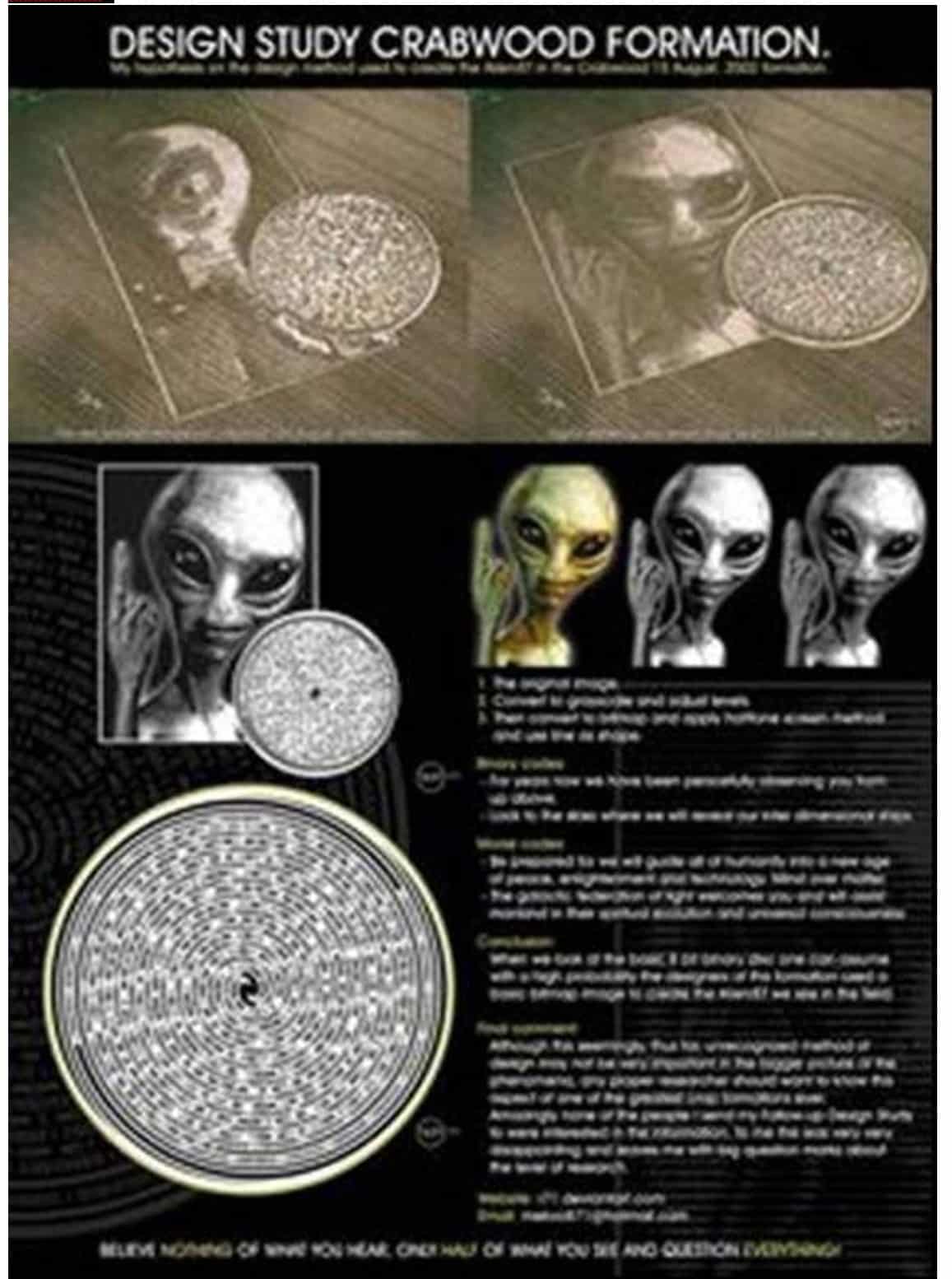 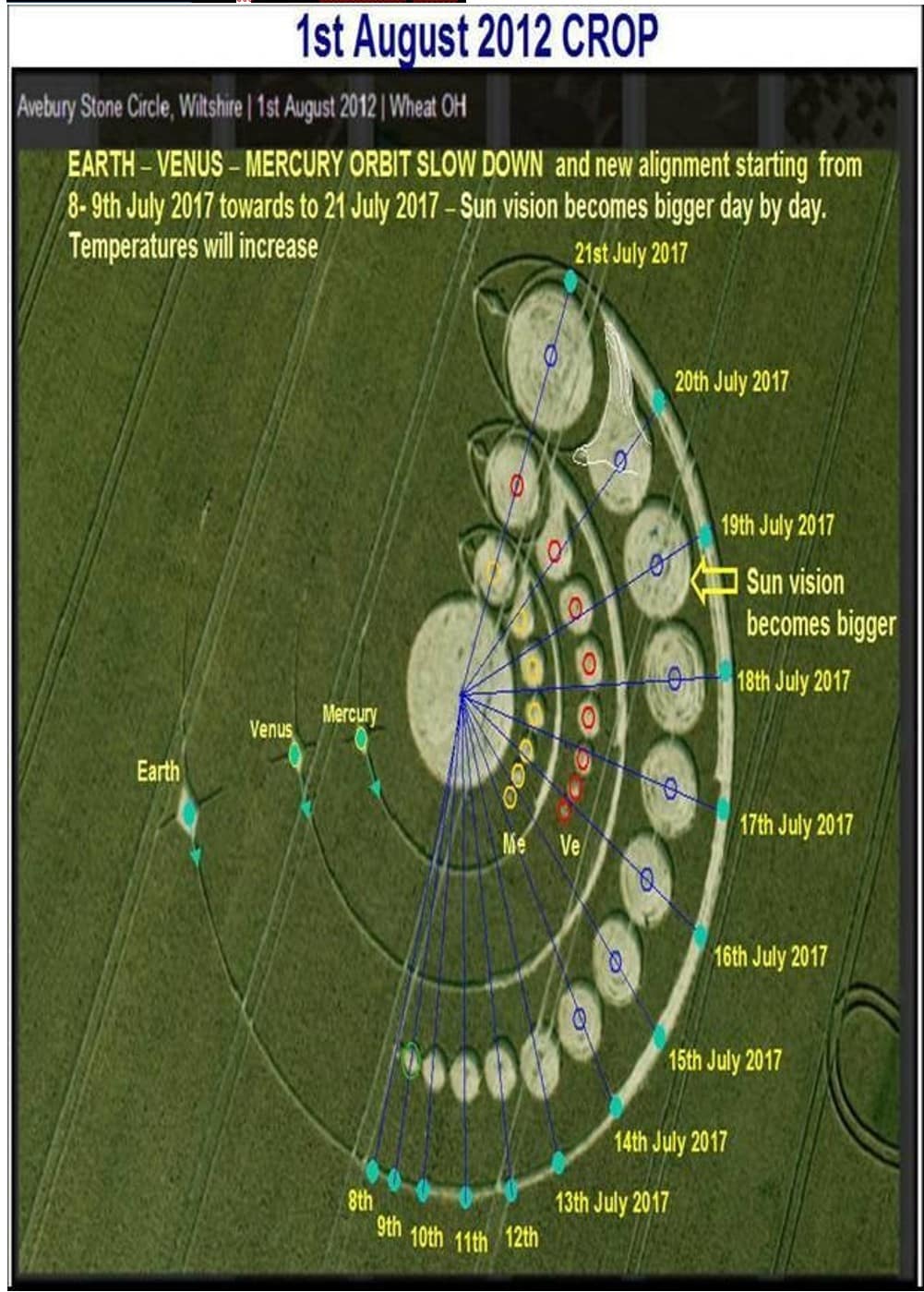 A warning Crop Circle showing that earth temperature is going up (note: earth all lives are limited only to another 2300 years only). Another 2 ways of Loka vinashaya or earth destruction – By heat and by melting of Ice by Water)

A warning Crop Circle showing that earth temperature is going up (note: earth all lives are limited only to another 2300 years only). Approch of another sun another 3 ways of Loka vinashaya or earth destruction – By heat and by melting of Ice by Water)

Note: Samma Sambudurajanan wahanse has mentioned and shown in Buddhist Philosophy thripitaka all these ways of destruction of lives on earth. 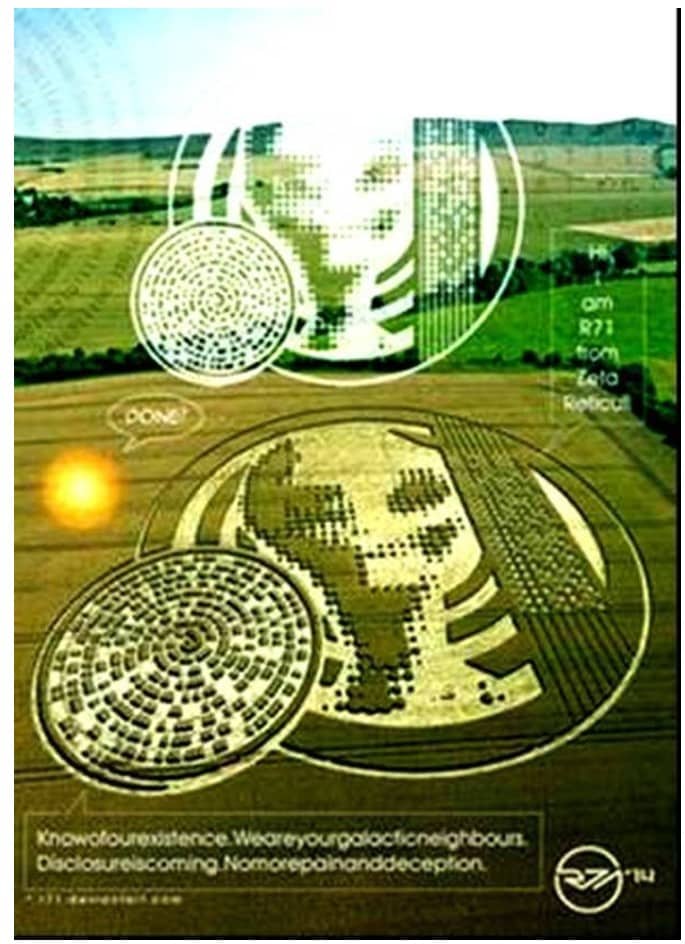 **** Apart from this Wasavarthi Maraya providing information on  his Loka his Mara beings consist of not DNA but RNA structure as shown on Covid 19 or corona virus and other information. 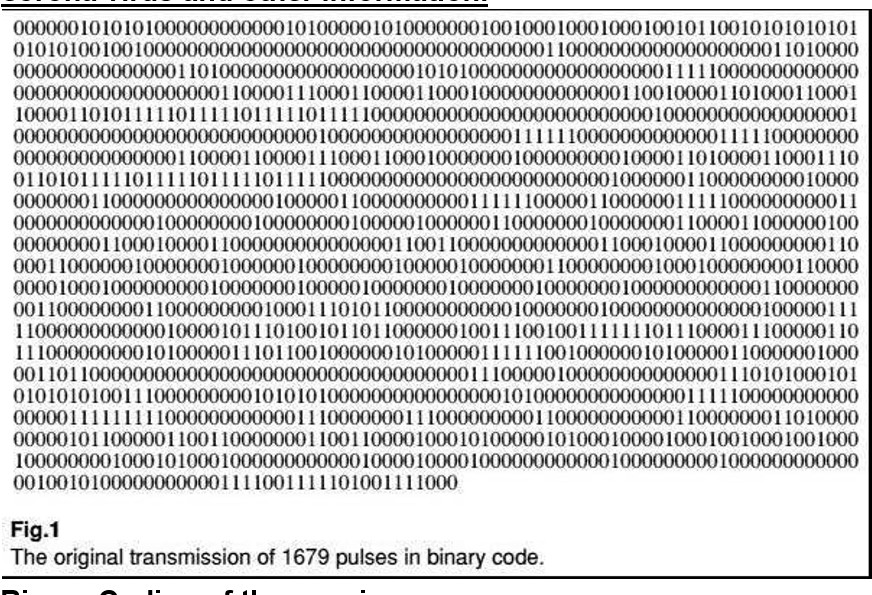 Binary Coding of the warning. 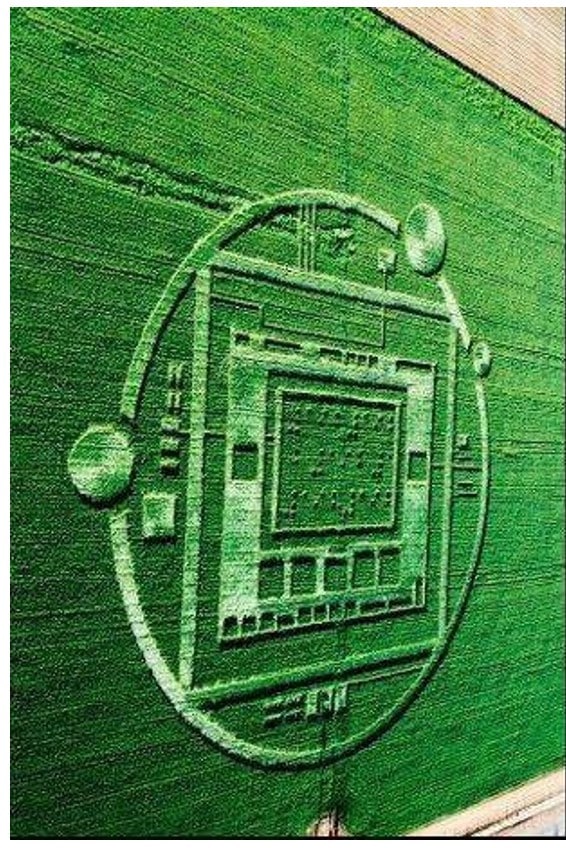 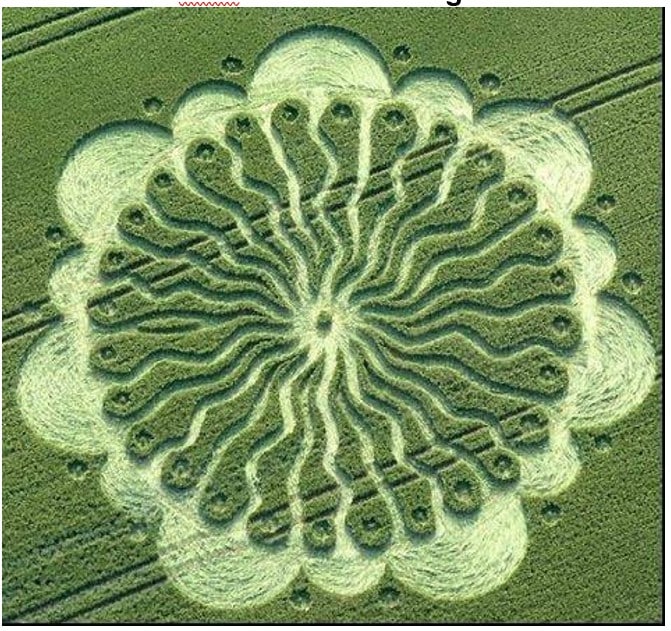 This crop circles shows his controlling Worlds and galaxies with outside circles, inside circles shows Worlds and galaxies with large amouth of Hell (niraya), amanusha (ghost) loka and sathwa (animal) loka . Also shows structure of the Web designed to monitor them. Similar to the World Wide Web but much more powerful and advanced technology but inter galactic wide web to monitor  1 to 16 galactic Thala or planes. 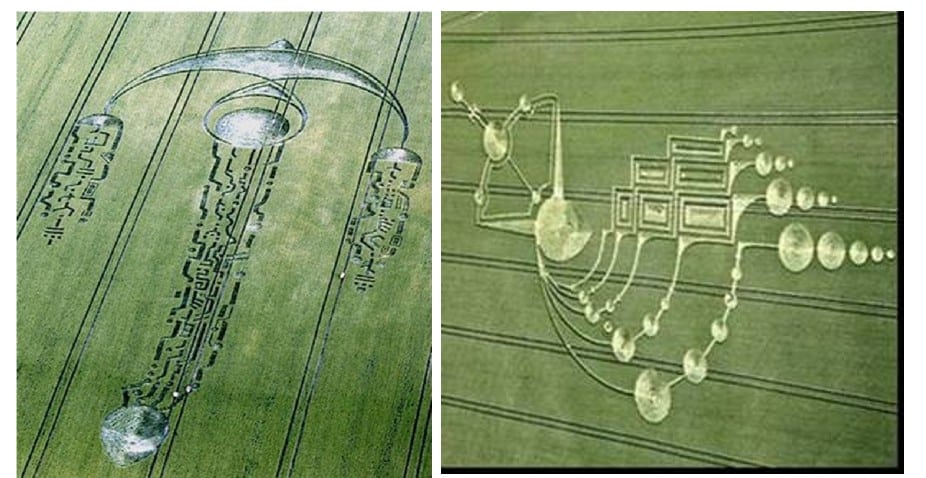 Crop Circle showing a Cockroach shown on right can communicate with

Cockroach Blood: Salivary fluids of Blaberus craniifer, a common pest species of cockroach, were found to produce leukocytolysis and hemagglutination reactions of human blood cells under in vitro conditions. Blood sera from these insects produced similar reactions, as well as the capacity to lyse human erythrocytes. The cockroach is known to regurgitate while feeding. These findings suggest the potential of the insect to induce adverse effects on human blood cells as a consequence of persons being bitten or having lesions that serve as skin sites for cockroach feeding.

The major difference between insect blood and the blood of vertebrates, including humans, is that vertebrate blood contains red blood cells. Insects and other invertebrates, on the other hand, have what is called hemolympha heterogeneous fluid that courses through their bodies, bathing all the internal tissues. Hemolymph is mostly water, but it also contains ions, carbohydrates, lipids, glycerol, amino acids, hormones, some cells and pigments. The pigments, however, are usually rather bland, and thus insect blood is clear or tinged with yellow or green. (The red color that you see upon squashing a housefly or fruit fly is actually pigment from the animal’s eyes.)

Lets us see the similarities between Cockroach blood cell tinted in red (when squashed) and a covid 19, corona virus cell 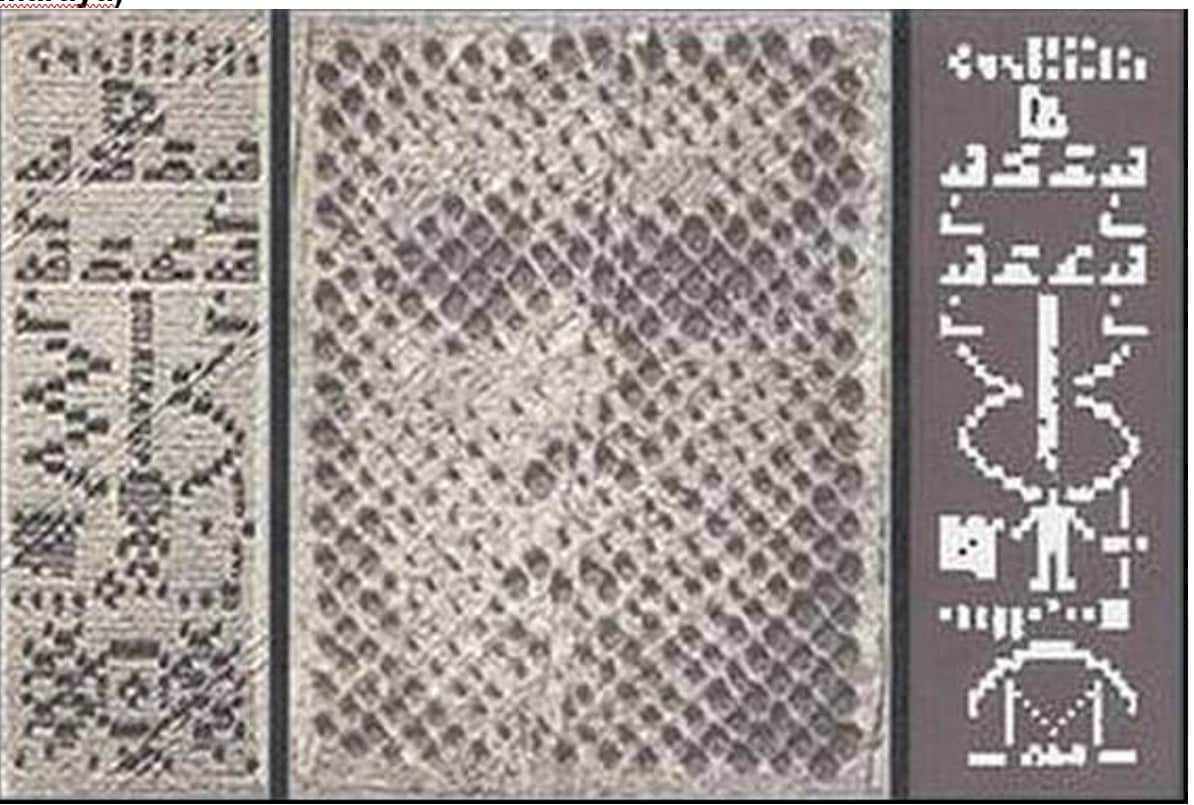 States. The Wasawarthie Mara Loka Galaxies species of Kama Divya loka has RNA not DNA. So can determine the connection between Covid 19 (corona) RNA virus and our solution for Covid 19 based on mRNA.

Amsbio announces the launch of a new service for synthesis of customdesigned, highly modified mRNAs prepared by an advantageous in vitro transcription methodology.

Traditional approaches for engineering changes in cellular expression profiles have employed mostly DNA or RNA based viral and non-viral vectors.

Unfortunately, these methods carry high risks, due to genomic integration with permanent genetic alteration of cells, and safety and ethical concerns relating to the use of DNA-based vectors in human clinical therapy.

Using in vitro synthesised mRNAs offers an advantage if these crucial permanent changes are not needed and the associated problems can be avoided if transient gene expression changes are sufficient or even an advantage.

Until recently concerns about RNA degradation problems have halted widespread use.

Recent advances in the availability of synthetic mRNAs (syn-mRNAs) prepared using in vitro transcription methodologies has increased confidence in working with syn-mRNAs. 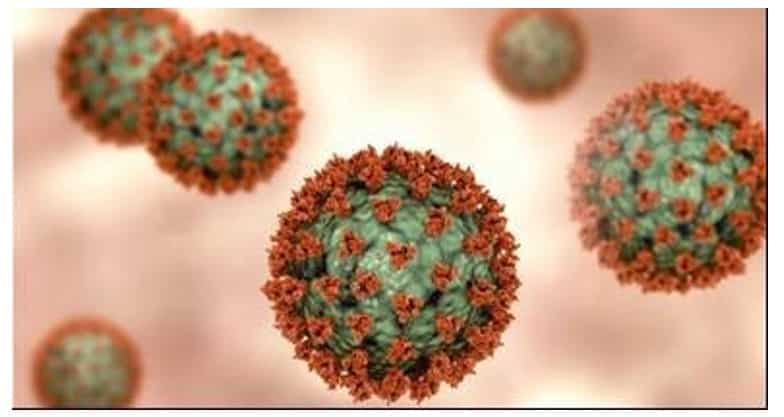 AMSBIO has launched a range of ready-to-use SARS-CoV-2 Spike protein coupled magnetic beads that combine convenience, minimum non-specific binding and developed operational protocols saving you time and hassle. Developed for immunocapture, cell stimulating, biopanning and flow cytometry applications these new products use biotinylated SARS-CoV-2 Spike protein pre-coupled to streptavidin conjugated magnetic beads, which can capture the Anti-SARS-CoV-2 antibody or ACE2 protein from cell or serum sample. Because Streptavidin has an extraordinarily high affinity for biotin with a dissociation constant (Kd) on the order of 10-14 mol/L, the biotinylated protein can bind to the magnetic beads irreversibly. 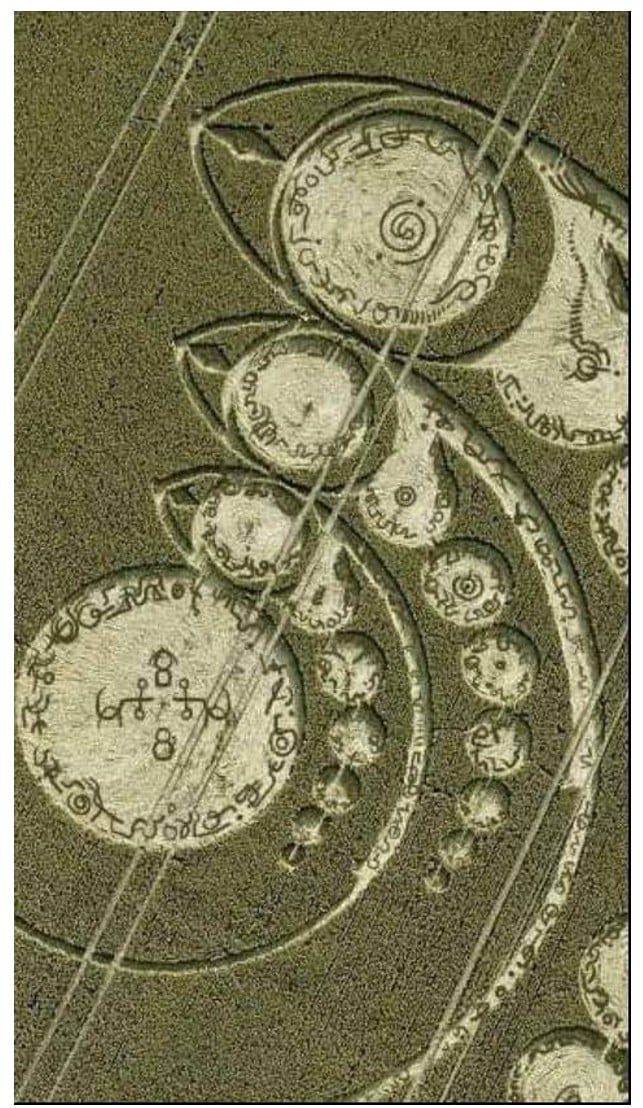 The crop circle shows the Characters used and description of Wasavarthi 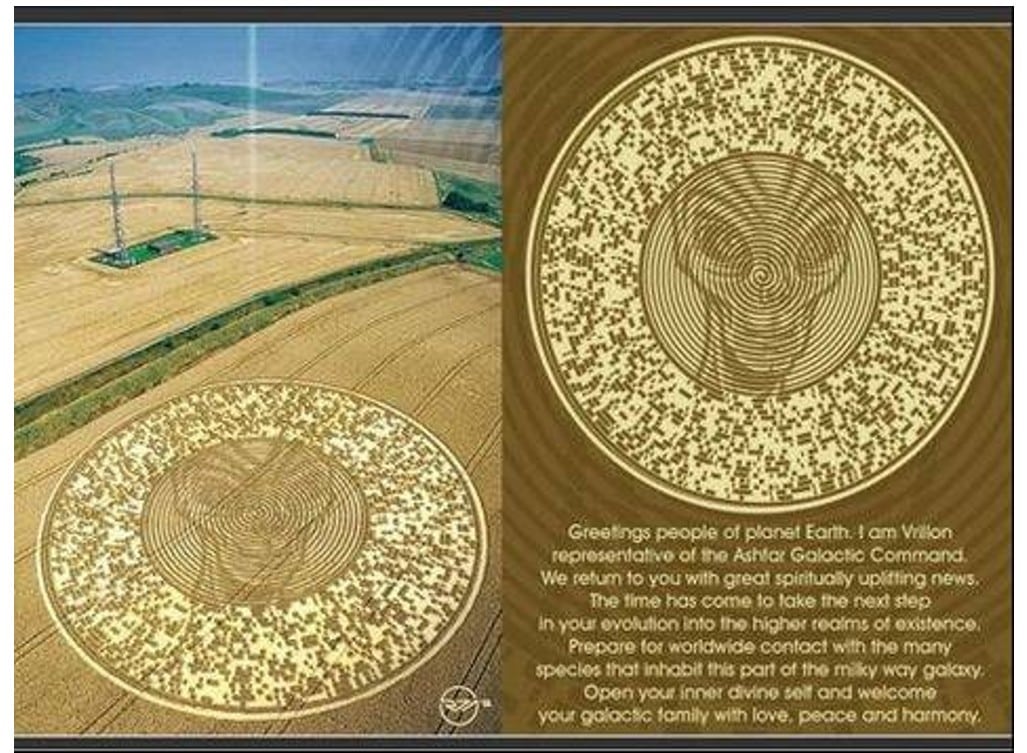 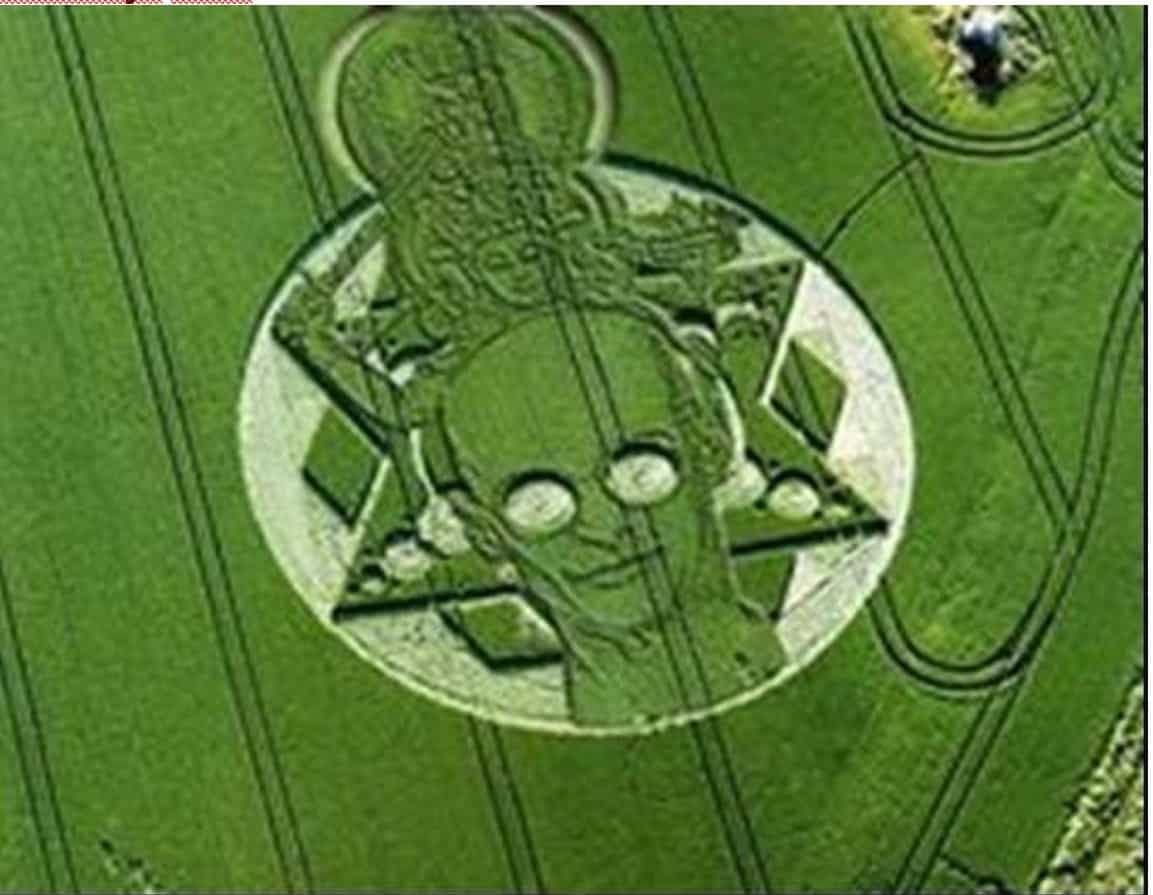 The crop circle shows a very important  message of Wasavarthi Maraya admit the truth that a Manushya Loka earth human beings will find and remember again the Buddhist philosophical way path to Nirvanaya that Every thing in this Cosmos planes is Anithyaii (Every 1687th of a second every cosmic particle changes as it undergoes attachment or a detachment which is an automatic operation), Dukyaayi (as it undergoes attachment or a detachment a life form being formed automatically with a mind particle, and every life form being born it will cause sufferings), Anathmai (this Cosmic operation of attachment or a detachment not belong to any life form. Due to foolishness get self attached and detached and this cosmic operation goes on for ever causing sufferings. That Manushya Loka earth human beings will find and remember again during meditation the Buddhist philosophical way to detach 28 cosmic Sanyojana particles and detach 31 planes of all possible galaxies which can be born and get Sovan, Sakrudhagami, Anagami, Arahath Margapala and not being born again. This will be within next 2300 years. Crop circle clearly shows Samma Sambuddha in the Mind on the top of the head.

Else all the rest  in the Manushya Loka earth human beings will be born in Niraya (Hell Animal, and Ghost loka planets about 98% at the moment as shown in the top right hand corner of the crop circle photograph.

Important Note: After questioning looking at the chuthi sitha of Kama Divya loka how without 2 Awayakrutha which is getting through meditation 20% each Kama deviyan being born on Kama Divya Loka Parinimmitha Wasavarthi,