by Vladimir Platov, …with New Eastern Outlook, Moscow, …and the Institute of Oriental Studies of the Russian Academy of Sciences, a research institution for the study of the countries and cultures of Asia and North Africa.

[ Editor’s Note: I had been wondering how quickly we would be hearing news of Bibi’s trial getting back on track, and frankly it is faster than I thought. We already have a claim of destruction of evidence before he left office.

Americans have long suffered under the depredation of having to endure Bibi’s megalomania, only to get a double dose when Trump came onto the scene in a surprise move with his vanity presidential run. How we suffered under the King of Con Men.

But what a joy it would be to see both men convicted of criminal acts and receive suitable punishment. It would enhance the theory that democracy is a superior form of government if it were not for all of the rampant corruption, including the hardwired kind, the hardest to remove.

Bibi seems to have shot all of his possible arrows to politically derail his trial. And, through repetition, he has worn the term ‘witch hunt’ down to a threadbare status. As opposition he will fight one last battle to disrupt the new government as much as possible, which could be viewed socially and even legally at some point as disloyalty to his country.

We also have Mr. Trump’s string of horrendous acts as a contender for the gold medal in that category. Both Trump and Bibi were advocates of P.T. Barnum, the circus magnate’s quip that, “There’s a sucker born every minute”. Only in modern times that might need to be updated to “one every second”… Jim W. Dean ] 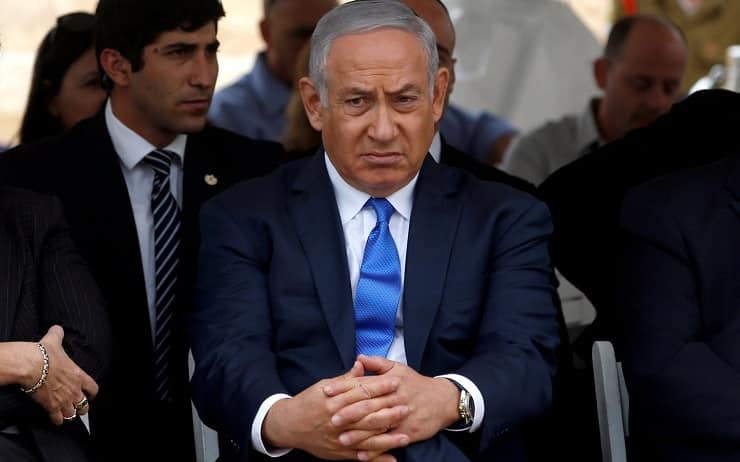 For the first time in 12 years, Israel has a new prime minister, marking the end of Benjamin Netanyahu’s reign. Over his years in power, Netanyahu’s reputation has been greatly eroded: he is called the “minister of crime”, and is accused of mishandling the crisis caused by the coronavirus and the economic consequences that ensued.

Late in the evening on June 12, thousands of his opponents began to clamorously celebrate the end of his reign near the former prime minister’s official residence in Jerusalem. People were holding posters that read: “Bye Bye, Bibi, Bye bye”, while singing, pounding on drums, and dancing.

Even back in 2019, 71-year-old Netanyahu was indicted on three charges: bribery, fraud, and breach of trust. These have already become common knowledge:

“Case 1000” (about an incident involving the corruption-related receipt of luxurious cigars, champagne, and jewelry); “Case 2000” (about Netanyahu’s alleged request to the editor-in-chief of Yediot Ahronot to cover the activities of the Israeli authorities in a positive light in exchange for help in putting the muzzle on the newspaper’s direct competitors); “Case 4000” (this one is considered the most serious, since on top of fraud and breach of trust, it is presumed that the prime minister gave preferential treatment to the Bezeq telecom company in exchange for positive coverage on its Walla! website).

Many experts construed the politician’s struggle to form a new government as his opportunity to dodge the courts. His official removal from office on June 13 means that he no longer enjoys immunity from criminal prosecution, so special attention in Israel is now being devoted to the former prime minister’s upcoming trial, but he continues to deny his guilt.

An Israeli court rejected the motion to postpone Netanyahu’s trial, and ruled that the process of hearing witness testimony begin on June 21.

Netanyahu faces 10 years in prison for corruption, in addition to 3 years for both fraud and breach of trust. However, his trial could drag on for many years. Among the possible scenarios for how Netanyahu’s prosecution could develop, it could not be ruled out that he will want to seek a presidential pardon, but this seems unlikely.

Under another scenario, the prosecution could allegedly propose a deal, having him pleading guilty in exchange for dropping the charges or reducing the sentence, since Netanyahu “has already suffered enough”.

On top of past scandals, recently Haaretz reported that rumors originated in the Likud that Netanyahu had allegedly ordered the destruction of certain incriminating documents before handing power over to Naftali Bennett.

As the party stated, all documentation related to foreign policy or security, and minutes for various meetings, conversations, and negotiations are recorded and stored in digital format in the government’s computer system.

In the event that the prime minister’s office deems it necessary, the investigation into this incident will be conducted under the auspices of the Ministry of Defense and the Shin Bet.

If the destruction of these documents is confirmed, the accusations put forth in the newspaper Haaretz, according to the article’s author, will “constitute a shameful and, most likely, the final chord” for the Likud’s leader, Netanyahu. Meanwhile, a spokesman for Netanyahu called these assumptions “complete lies”.

Israel, under the rule of Benjamin Netanyahu, reached the peak of its economic and political power. The country that had a rationing system that was abolished only in the late 1950s is now in the top three dozen of the world’s richest, most developed countries.

However, in the current atmosphere of incessant scandals around Netanyahu, nowadays no one recalls how Netanyahu was nominated for the Nobel Peace Prize last autumn for his contribution to normalizing the situation in the Middle East.

It should be reiterated that this initiative was put forth by Paolo Grimoldi, a representative with the Italian Chamber of Deputies from the Northern League party.

Among Netanyahu’s merits, Grimoldi called the fact that the Israeli prime minister was able to make a significant contribution to establishing peace in the Middle East, signing agreements with Bahrain, and getting Saudi Arabia’s consent to open up its airspace to Israeli aircraft.

As Prime Minister Benjamin Netanyahu’s departure from power has demonstrated, despite everything he has done for the country, Israel’s democratic institutions work. They did not allow the country’s government to turn into a dictatorship, which has recently become more and more resembling of the manner in which Netanyahu leads, so deftly manipulating public opinion while using all available opportunities to remain in his seat.

But the accumulated effect of fatigue and scandals, apparently, did their job. The time has come for changes, and that is why the successors in the government will have to radically change their approaches, since the current ones do not work.

Twelve years of undisputed leadership in Israel, which is at the center of the highly explosive Middle East region, represents a long time. Recently, Germany also realized that 14 years in a row for Merkel has been too many.

Therefore, it is not surprising that in Israel they have realized through trial and error: Twelve to fourteen years is a critical time, and then a riot of the elites begins, and for them the self-perpetuating caste blocks the social ascent to power, and the media and businesses that accompany that.

It is noteworthy that Israel not only rejected Netanyahu’s 12-year term in power, but also ended the almost 40-year reign, with brief interruptions, on the part of the Likud. This is a clear signal that there is also a time limit for the ruling party (only Japan had something similar among developed countries).

Today, many Israelis are gripped by euphoria over Netanyahu’s departure from power. However, as often happens, “anticipation of the holiday can be much more satisfying than the holiday itself”.

In the coming months, the Israelis will certainly discover that the country’s problems that arose during Benjamin Netanyahu’s rule have not gone away since his departure, but will perhaps only grow worse. And this may lead to the beginning of a new round of political struggle in the country, whose outcome no one can predict …