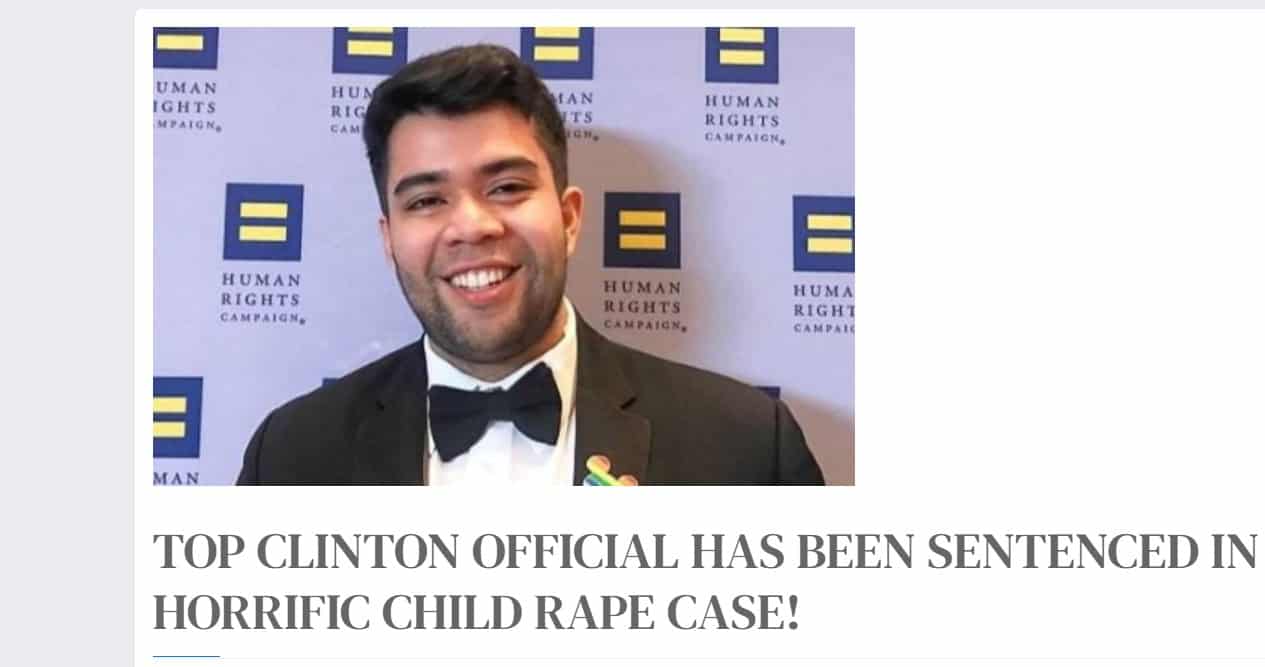 VT: When we tried to look up Joel Davis among Clinton, and this would have to be President Bill Clinton, “top officials” we came up blank.

We figured he was Secretary of State or such.  That’s a “top official.”

By “official,” they mean someone who was photographed at one time wearing a Clinton campaign button.  Who made this up?  Gateway Pundit, that’s who.  How did VT get it?

The source was an email from Heritage Foundation funded www.conservative2020.com.  The supporting text reads as follows:

“The founder of the “Youth to End Sexual Violence” organization Joel Davis, and was a Hillary Clinton campaign officials.”

No, this wasn’t our typo, nor theirs, this is Pidgin English. The source used was Associated Press:

CLAIM: An activist who decried child sex abuse and was himself charged with child sex crimes used to work as a Hillary Clinton campaign official.

AP’S ASSESSMENT: False. Joel Davis, an activist against child sex abuse who was arrested for his own child sex crimes in 2018, did not work for the Clinton campaign.

THE FACTS: The conservative website The Gateway Pundit on Wednesday falsely identified a New York man who was sentenced to 13 years in prison for child sex crimes as a campaign official for Hillary Clinton.

“Hillary Clinton Campaign Official and Founder of Org to End Sexual Violence Against Children Is Arrested on Child Rape Charges — Sentenced to 13 Yrs in Prison,” read a headline shared on the outlet’s website and social channels.

The erroneous claim that Davis represented the Clinton campaign first appeared in 2018, when he was arrested for possession and distribution of child pornography and for enticing a minor to have sex.

The reports appeared to rely on a 2016 photo of Davis wearing a Clinton button and posing with other supporters in front of her campaign posters. But Davis, who appears to have supported Clinton in the 2016 election, was never employed with the campaign, Hillary Clinton spokesman Nick Merrill told The Associated Press in an email in 2018.

“He is not in our system as ever having been on payroll or as a paid vendor of any kind at any time,” Merrill said.

Davis was not referred to, cited or quoted as a member of the Clinton campaign team in any news story published between 2012 and 2017, according to an archive search of all newspaper, television transcripts and newswire services around the world.

The false claim that Davis worked for the Clinton campaign emerged anew this week, after a Tuesday sentencing, where he received 13 years in prison for his crimes, according to the Justice Department.

Davis, 25, is a former Columbia University student who campaigned at the United Nations and elsewhere against child sex abuse before his arrest. He pleaded guilty to the charges in January 2020.

The Gateway Pundit did not immediately respond to a request for comment.

Their other source is The Gateway Pundit, according to mediabiasfactcheck.com:

Jim Hoft, publisher of ‘the pundit’ has a Wikipedia written by a publicist that shows award after award, awards difficult if not impossible to understand.  We do know that in February he was permanently banned from Twitter for attempting to interfere with an election.