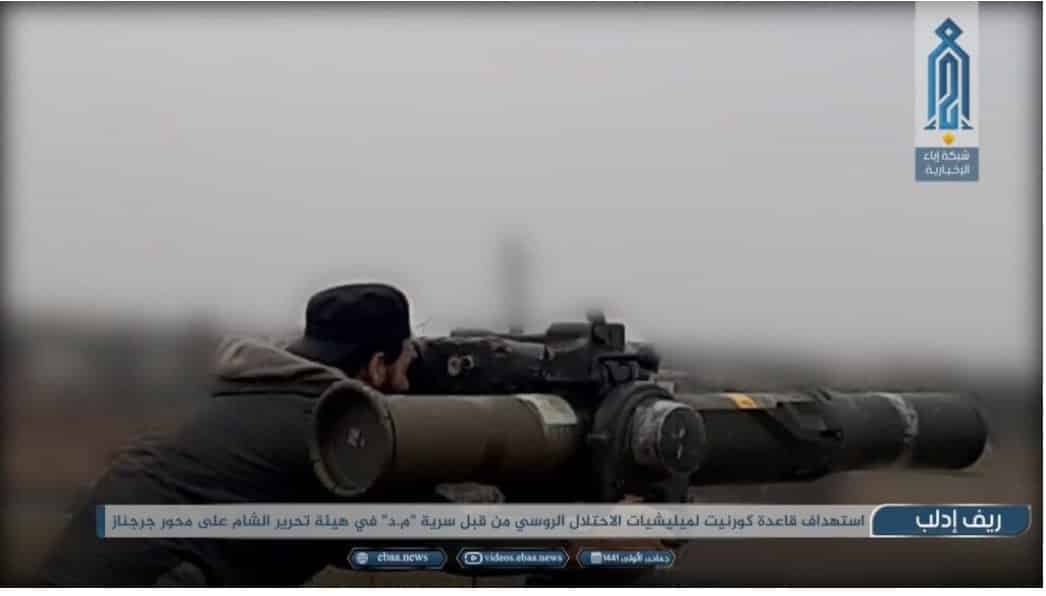 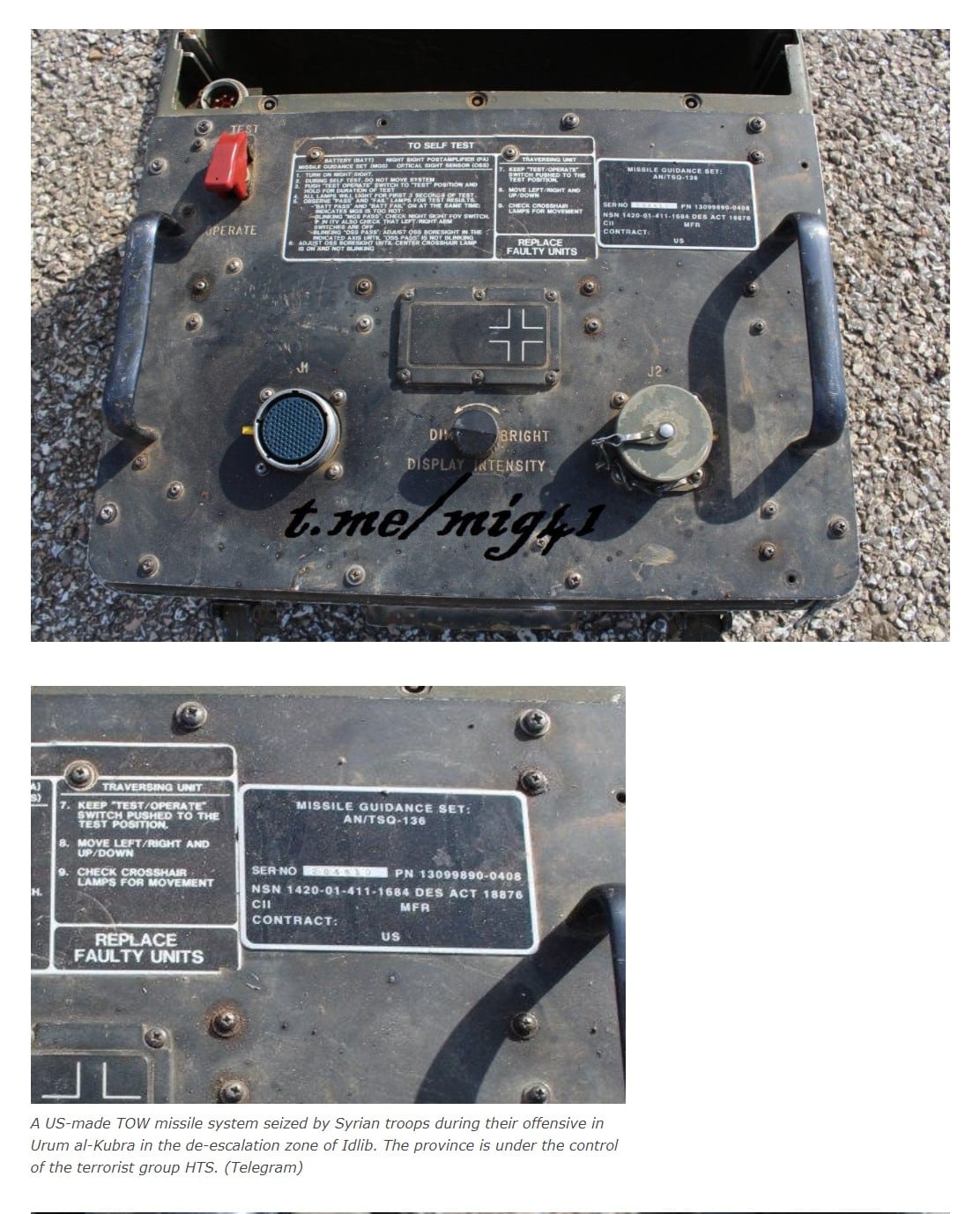 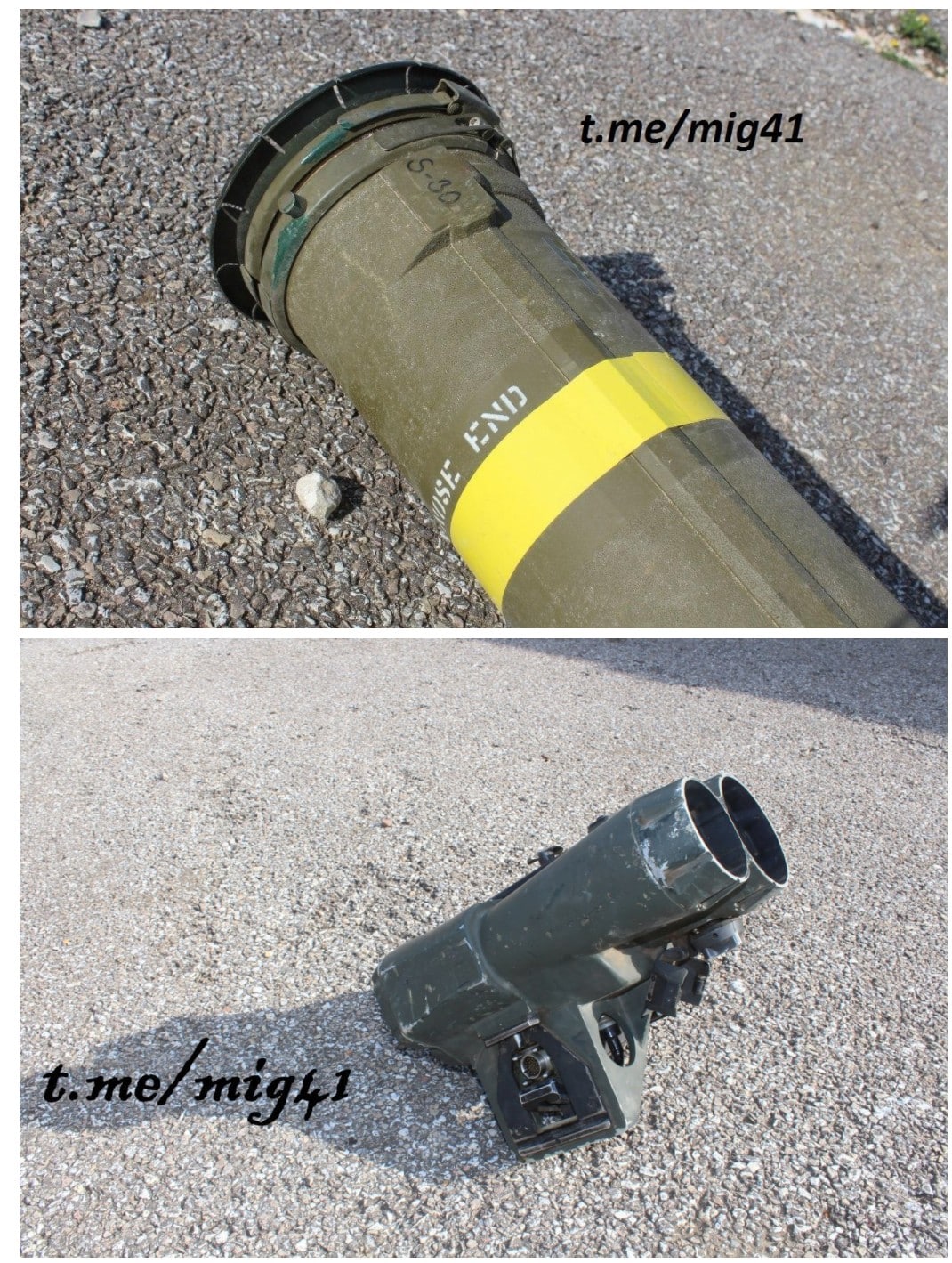 These TOW weapon systems were delivered by Raytheon Company to the US Marine Corps under a $1.4 billion contract (2012-2019). Part of them were later shipped to Syria.

While the US State Department has listed Hayat Tahrir al-Sham leader Abu Mohammad al-Julani as a “Specially Designated Global Terrorist” and announced a $10 million reward for information leading to his capture, the Jolani terrorist group has been well equipped with US-made missiles in Syria. A number of confidential leaks over the last years have already exposed the leading role of the US in arming militants in Syria. 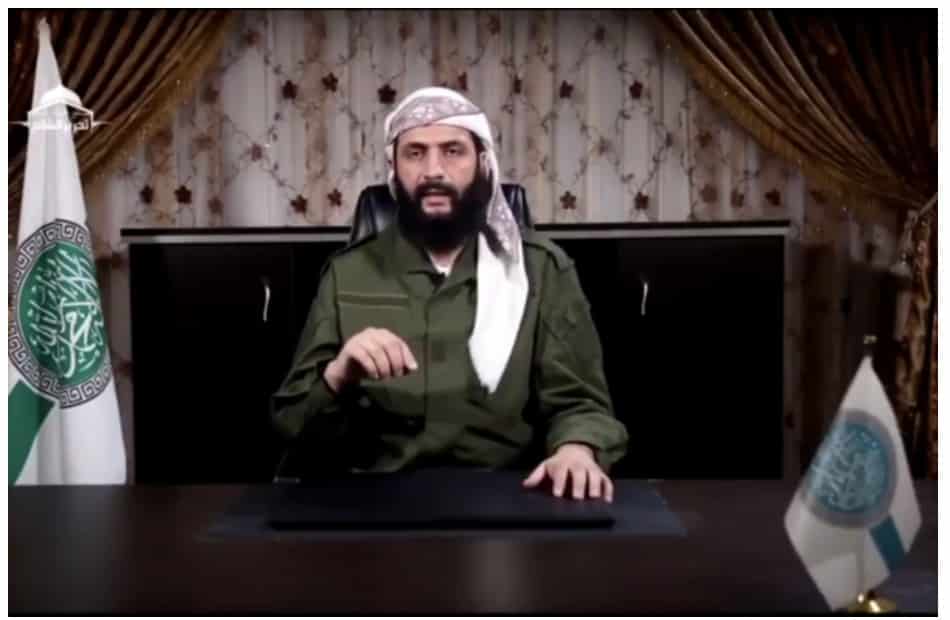 Documents obtained from the US Federal contracts registry reveal that the US Army Contracting Command (ACC) Picatinny Arsenal has contracted eight American companies to procure non-US standard weapons from 2020 to 2025. According to the Pentagon solicitation W15QKN-19-R-0049 “Non-standard Weapons, Parts and Accessories”, the deliveries will include “theaters of conflict”. 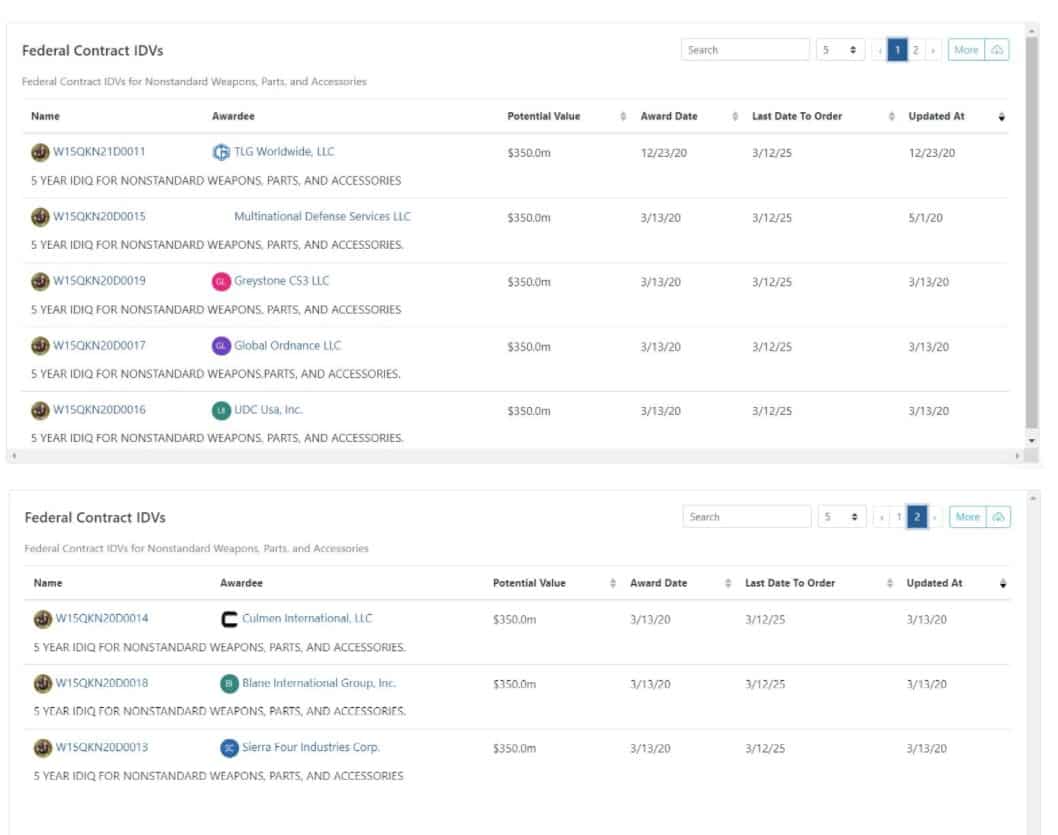 According to the US Federal Procurement Data System, the eight companies have already received orders with an estimated value of $25 million each or $200 million combined under the 5 year-long Pentagon program for non-US standard weapons supplies. These are foreign weapons which are not compatible with the US military standard, hence cannot be used by the US army and will be delivered as military aid to third parties.

Models and country of origin of the weapons

According to the weapon descriptions, these non-US standard weapons must originate from Bulgaria, Serbia and Romania. The Pentagon solicitation W15QKN19R0049 specifies that “shipping instructions for consignee (ship-to) will be furnished prior to the scheduled delivery date for items required under this requisition”.

The US contractors must procure the following items from these particular factories in Bulgaria, Serbia and Romania:

15,000 pcs. each 7.62x39mm AK/AKM style rifles are to be delivered to Podhum, Croatia. The US Government intends to provide a CAT 1 End User Certificate (EUC) signed by the USG for this requirement. Acceptable condition for this requirement is surplus condition or better. These items are required urgently.

Category 1 End User Certificate (EUC) is issued by the US Government to third parties different from governments for “defense purposes”. This practically means that the US can supply weapons to militants not states under the pretext “for defense”.

60 pcs. each 7.62x54R MG-1M machine guns from Arsenal, Bulgaria are to be delivered to Anniston Army Depot, AL, USA. The US Government intends to use these items for defense purposes including transfer by means of grant aid, International Military Education and Training (IMET) programs, Foreign Military Sales (FMS), and other security assistance and armaments cooperation authorities, to the Government of Burkina Faso. Proposals should include a discussion of the appropriate End User Certificate and signatory to use in order to effect the export of these goods from Bulgaria to the USA given the US Government intended use for defense purposes. Acceptable condition for this requirement is items must be new production, produced after contract award.

Interestingly, although the weapons are intended for “defense purposes” for the Government of Burkina Faso, the weapons are to be delivered to Anniston Army Depot, AL, USA.

16 pcs. each Romanian made, new production, 12.7x108mm machine guns similar to DShK(M) with accessories to be delivered to Aden Adde/Mogadishu International Airport (MGQ), Somalia with a final destination of the UN Support Office for AMISOM UNSOS. The US Government intends to provide a Category 3 End User Certificate signed by the Government of Somalia for this requirement. Acceptable condition for this requirement is items must be new production, produced after contract award.

Category 3 End User Certificate is issued by the US Government “to provide the item to allies engaged together with the United States in armed conflict with a common enemy”. Interestingly, although the weapons are to be exported with an End User Certificate signed by the Government of Iraq their destination is not Iraq but the US military Camp Arifjan in Kuwait.

Why is the Pentagon planning to ship 15,000 pcs. of AK47 style rifles (from Bulgaria and Serbia) to a depot in Podhum, Croatia although Croatia is not the end user of these rifles?

The Pentagon has deployed a secret US Special Operations Command unit code named Task Force Smoking Gun in Croatia since 2017 in support of the US Special Operations Command (USSOCOM) Train and Equip program in Syria. According to leaked e-mails, published by Arms Watch in 2019, Task Force Smoking Gun has been operating an arms depot in the Croatian city of Podhum near Rijeka Airport from where Pentagon-commissioned American carriers (Atlas Air and Kalitta Air) have transported the military cargo to the US air base Al Udeid in Qatar. 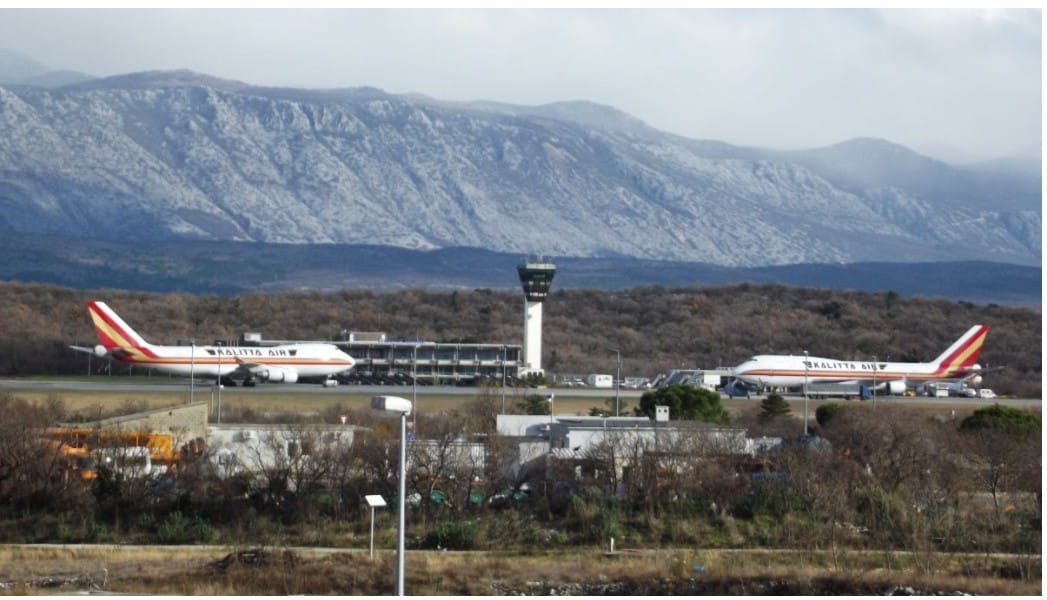 According to the 2019 leaked documents, published by Arms Watch, the weapons which Task Force Smoking Gun diverted to Syria, originated from Serbia. The buyers were four American companies which had been contracted by the US Government to supply non US standard weapons (weapons not in use by the US Army) – Sierra Four Industries, Orbital ATK, Global Ordnance, and UDC.

Leaked passports revealed which US Government officials and private contractors had ordered, inspected and accepted the weapons. The same names have been listed by the Pentagon as recipients of a US Central Command award in recognition of their support to the Syrian Train and Equip program – the US program for arming militants in Syria.

The new 2020 Pentagon contracts for Bulgarian and Serbian rifles, destined for Podhum, Croatia, have been awarded to the same US companies: Sierra Four Industries, Global Ordnance, and UDC, which have already been exposed for illegal arms supplies to Syria.

The main active military group in Syria currently is Hayat Tahrir al-Sham (HTS) in Idlib. The terrorist group was previously known as Al Nusra Front – the Al Qaeda affiliate in Syria but renamed itself to HTS in order to receive freely military aid from Western countries. This raises questions as to whether Al Qaeda will be the consignee of these weapons in Syria.

I am an independent journalist and do not work for governments or corporations. If you want to support my work, please go to the Donation page or Become Volunteer. Thank you! If you want to follow me on Telegram, please subscribe to Arms Watch Telegram channel using the link: https://t.me/armswatch