Home History The passing of a warmonger and ethnic cleanser 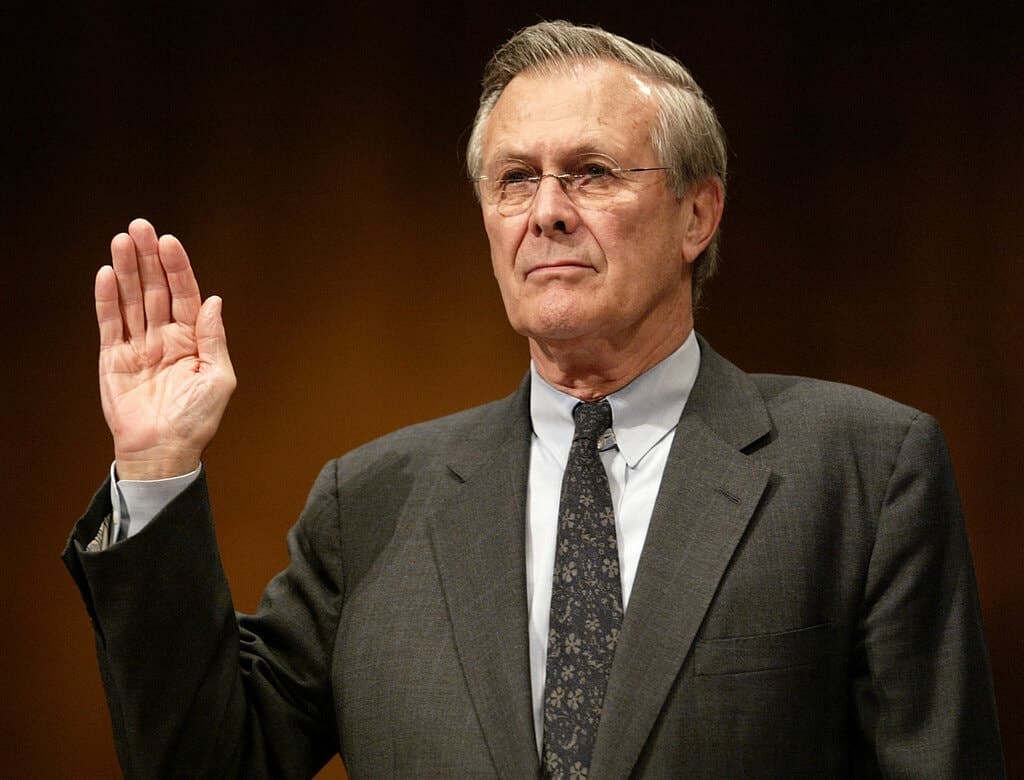 Donald Rumsfeld, the man who was instrumental in defending the Iraq War, the man who perpetuated one categorical lie after another,[1] the man who has killed “400,000 people,”[2] is now dead.

It was Rumsfeld who forthrightly declared that the removal of Saddam Hussein had “created a more stable and secure world.”[3] That was another lie from Rumsfeld. As one report suggests, Rumsfeld lied “as easily as he breathed.”[4]

“He wrapped himself in a superficial understanding of epistemology (‘there are known knowns; there are things we know we know. We also know there are known unknowns…’) that a compliant press treated as sagacity. He wore a mask of assuredness, a con man’s trick, as he said things that bore no resemblance to the truth, such as his September 2002 insistence that he possessed “bulletproof” evidence of a nonexistent alliance between Saddam Hussein and al-Qaeda.”[5]

It was said that “Rumsfeld in Iraq waged a costly and divisive war that ultimately destroyed his political life and outlived his tenure by many years. But unlike McNamara, who offered mea culpas in a 2003 documentary, “The Fog of War,” Mr. Rumsfeld acknowledged no serious failings and warned in a farewell valedictory at the Pentagon that quitting Iraq would be a terrible mistake, even though the war, the country learned, had been based on a false premise — that Saddam Hussein, the Iraqi leader, had been harboring weapons of mass destruction.”[6]

Without hesitation, Rumsfeld wanted to send American soldiers to die in the Middle East for Israel, not for a good cause. He declared: “A conclusion by our enemies that the United States lacks the will or the resolve to carry out our missions that demand sacrifice and demand patience is every bit as dangerous as an imbalance of conventional military power. It may well be comforting to some to consider graceful exits from the agonies and, indeed, the ugliness of combat. But the enemy thinks differently.”[7]

Despite the fact that the war in Iraq turned out to be a total disaster—a war that will cost America at least six trillion dollars—Rumsfeld was still defiant to the end, positing one categorical lie after another in books such as Known and Unknown.

Rumsfeld was also instrumental in holding people in places like Guantanamo. What is even more revealing is that Lawrence Wilkerson, a former aide to Powell, announced that Bush, Chainey, and Rumsfeld knew that most of the prisoners held in the camp were innocent, but still detained them for political and ideological reasons.[8] Wilkerson’s announcement gained strength when it was discovered that of the almost 600 detainees, no more than 24 had any connection to al-Qaeda.[9] Yet many of the prisoners, if not all, were regularly tortured.[10]

The war on terror has turned the American government and politicians into savage people, reversing traditional American ideals strictly based on law. Indeed, before the war in Iraq, waterboarding was unknown in America, used by tyrant countries such as Cambodia during the Khmer Rouge regime.[11] Looking back, Colin Powell even admitted that it was torture. Donald Rumsfeld was one of those people who needed to be hanged. Will we miss him?

Absolutely not. Writer Spencer Ackerman has said it well: “The only thing tragic about the death of Donald Rumsfeld is that it didn’t occur in an Iraqi prison.”[12] If the New York Magazine is right in saying that Donald Rumself has built a “hell” for himself,[13] then perhaps it is time for him to taste his own medicine. “Iraq will be Rumsfeld’s legacy, with all of the lies, all of the torture, all of the killing.”[14]