Henry Makow has a Ph.D. in English Literature from the University of Toronto and is the author of the best-selling book Cruel Hoax: Feminism & the New World Order.

JEA: There was only one president in American history who actually destroyed the banksters, and that person happened to be Andrew Jackson. Jackson knew that the rich and powerful—more precisely the banksters—were using their power to oppress the weak and essentially destroy the economy.

Jackson declared that “the mass of the people have more to fear from combinations of the wealthy and professional classes—from an aristocracy which through the influence of riches and talents, insidiously employed, sometimes succeeded in preventing political institutions, however well adjusted, from securing the freedom of the citizen.”[1] He continued,

“The Bank has by degrees obtained almost entire dominion over the circulating medium, and with it, power to increase or diminish the price of property and to levy taxes on the people in the shape of premiums and interest to an amount only limited by the quantity of paper currency it is enabled to issue.”[2]

Jackson was probably the most intrepid man of his era to vigorously oppose a privately-owned central bank because he foresaw that eventually usurers would end up cheating the common people.[3] 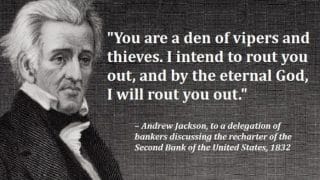 The Jacksonians were not against all banking systems but against usurious bankers, who Jackson called “hydra-headed” monsters “eating the flesh of the common man.”[4]

Speaking like a fire-and-brimstone preacher from the South, Jackson wrote that such bankers “are a den of vipers and thieves” who will eventually destroy families if no one stops them. “I have determined to rout you out and, by the Eternal, I will rout you out,” he said.[5]

We certainly need an Andrew Jackson today to take care of oligarchs like Jeff Bezos, Elon Musk, Warren Buffet, Bloomberg, George Soros, etc., and to restore economic balance in the nation. Why? Because these people think that paying taxes are only for the average person, not fort them.[6] 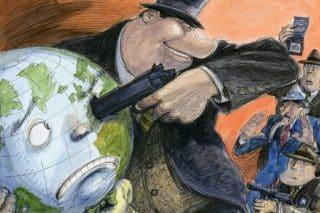 HM: International bankers live in fear. Not of starvation, disease or war. These are the concerns of children in the Third World.

Bankers are terrified we might object to paying them billions each year in interest for money they create out of nothing, guaranteed by our taxes. (The Federal Reserve Board, a private cartel of mostly foreign banks, finagled this monopoly in 1913.)

The bankers are frightened that, like the homeless man’s dog, we might say, “I can do this myself.”

They are scared the government might go even further and “default” on trillions of make-believe “debt.”

They are frightened of losing “control.” They toss and turn at night.

In order to sleep more soundly, the bankers have taken “steps.”

These precautions help us to understand the world we live in, why it is becoming safer for bankers but less safe and more bizarre for everyone else.

First, people who own money machines tend to have a lot of friends. The bankers helped their friends establish monopolies in oil, chemicals, pharmaceuticals, transportation, media,etc. and took a healthy stake. As you can imagine, these people are thick as thieves. Lawyers, journalists and intellectuals all vie for a piece of the action. (Servicing this cartel of cartels is what passes for “success” these days.)

The bankers’ first precaution is to buy all the politicians. The second is to buy the major media outlets in order to promote the illusion politicians make decisions and represent our interests. The third precaution is to take control of the education system, ensuring that people stop thinking at an early age.

Then the bankers use the government and media to convince us that religion, nationalism and nuclear family are unfashionable, and we want what they want.

We “want” world government (“globalization”). The bankers need to eliminate nation states, freedom and democracy in order to streamline their business and consolidate their power. The UN, the IMF and World Bank, — glorified loan sharks and collectors — will make the laws.

We “want” secularism and the separation of church and state. Even though we were fine with Christianity and Christian values for centuries, the bankers don’t want any authority to challenge their satanic decree.

We “want” diversity. Countries are not allowed to maintain their national identities or traditions. Last Christmas, my provincial Premier tried to rename the Christmas tree at the legislature a “multicultural tree.” Diversity is respecting every culture but our own. Every nation must be heterogeneous as a box of Smarties — no one in a position to challenge the bankers.

Or take “feminism.” Masquerading as equal rights for women, this ideology is designed to spread lesbian dysfunction. If women focus on careers, it means they give less importance to husband and children. They have fewer or no children who will be raised in state day cares.

Moreover, psychological and biological differences between men and women are not “stereotypes.” But signatories to the latest UN “CEDAW” Convention (passed by the US Senate Foreign Relations Committee) will be required to “take all appropriate measures to modify all social and cultural patterns of conduct of men and women.” (Article 5)

Under the guise of “womens” and  “gay” rights we are being re engineered to behave like homosexuals, easier to control. Psychological and biological differences between men and women are not “stereotypes.” But signatories to the latest UN “CEDAW” Convention ( passed by the US Senate Foreign Relations Committee) will be required to “take all appropriate measures to modify all social and cultural patterns of conduct of men and women.” (Article 5)

This kind of Communist-inspired social engineering is simply persecution of heterosexuals. It is intended to arrest our natural development: the birth rate has halved while the divorce rate has doubled. An army of highly paid lawyers, social workers and bureaucrats treat the casualties. These self-serving do-gooders are the bankers’ biggest constituency.

People –stunted, love-starved, sex-obsessed — without family, religious or national identity, are easy to control. (They’ll join anything; they’re looking for a family.) But in case of resistance, the bankers have created a bogeyman, “terrorism” to justify a huge security apparatus.

The Office of Homeland Security is designed to control us — the domestic population. Why would this be necessary? We’re “in debt” trillions of dollars and the bankers intend that we pay. One day they will take away our toys. In case that’s a problem, an Orwellian police state will be in place. But first,the Muslims must be subjugated and robbed.

Talking about the United States as if it were an independent country is silly. American politicians pawned U.S. sovereignty in 1913. Ever since, U.S. soldiers have been bullyboys for international bankers, and nothing else.

The planet has been hijacked. Our leaders are dupes, opportunists, traitors or all three. Almost everything we know about modern history is a hoax. A stench of moral compromise hangs over our public and cultural life. Anything promoted by the media, education, or government is suspect. This is what happens when we deny Moral Order i.e. God.

This is what our children will inherit, a world that is safe … for international bankers.