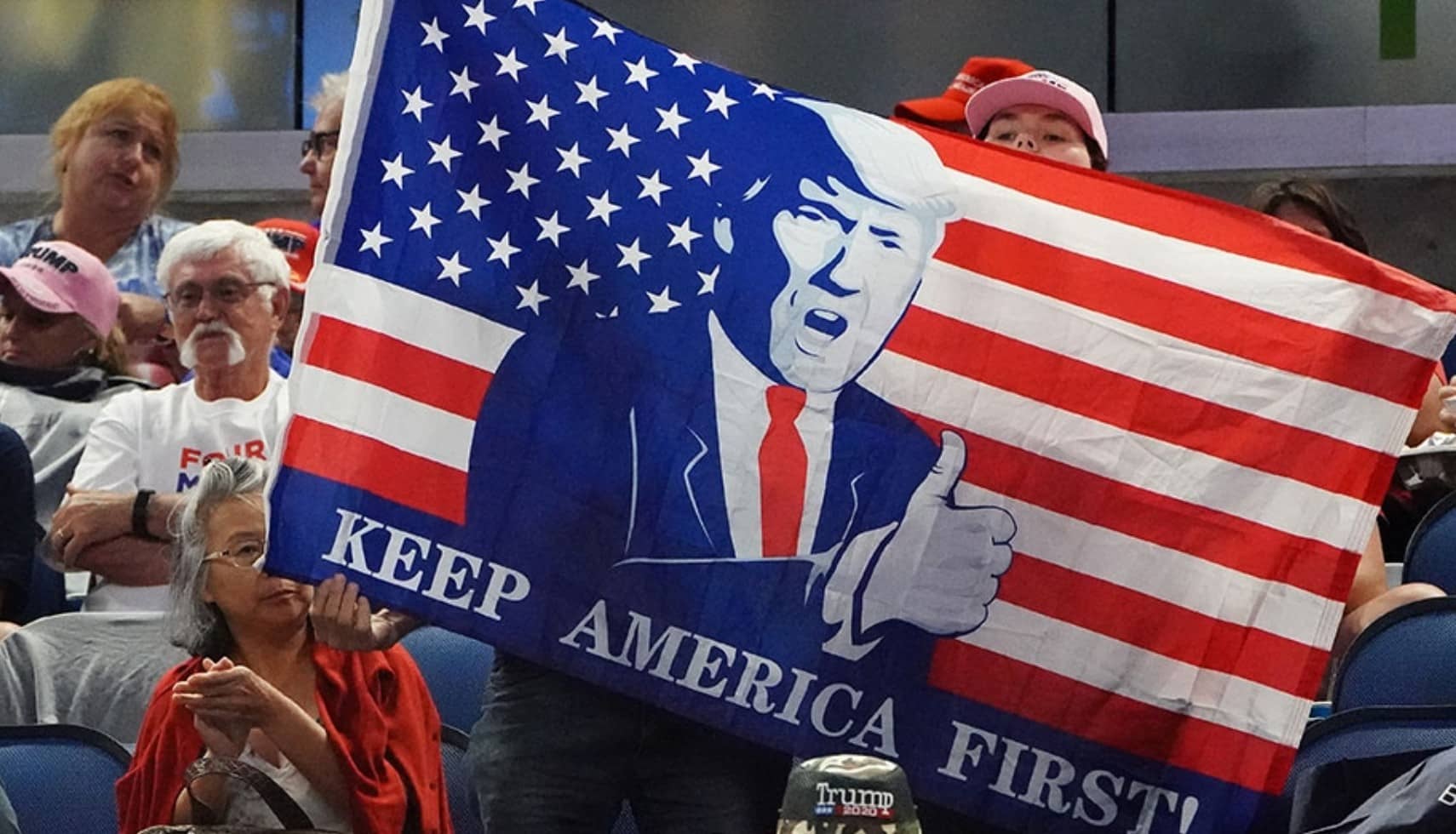 Anyone want to defend that flag?  Takers?  What are they hiding, behind Trump’s criminal empire?  4 generations of child sex trafficking, more than 4, going back to the Gold Rush in California, then the Yukon and later the brothels of New York under a family whose history includes Fred Trump as Grand Dragon on the Klan.

But it gets worse still, not just the diarrhea spewn from Trump’s enormous filthy ass.

People are pasting anything on the flag, publicly hiding behind the sacrifice of others to peddle  their private obsessions with sexual orientation and mutilation, with “cop sucking” or BLM.

None of it belongs on the flag.

Worse still… we are hardly a democracy.  The whole thing was a con from day one, states with no people getting two senators, a supreme court of special interest lawyers overruling elections, voting away the constitution which was a piece of shit like a ‘Trump flag’ from day one as well.

The Bill of Rights was an afterthought and dozens of amendments have still left a nation where 1% control half the nation’s wealth and 100% of its government.

Then we have the fucking civil war and the shit eaters from the South who like to dream about the nigger hating Confederacy. (Oh, I’ve earned the right to use that word a thousand times over)

Cotton was king in the South.  Cotton fed mills in Britain financed by London’s banks, who also controlled Wall Street and its banks from Day One.

Britain used the US as a colony and still is, not “real Britain” but London’s bankers, the place the RKM/KN settled in after Amsterdam, after Warburg and Frankfurt, after Venice and Genoa, after being kicked out of Iberia and before polluting Islam through their control of Salonica and their Ottoman Empire, reborn under the Young Turks, ISIS, al Qaeda, the Saudi Royals and Likud.

Here in the US…the money families of the Northeast ran opium from Turkey to China for Britain when it became illegal there.  Britain cleaned its own image but, working with its Dutch partners and the precursor of today’s Kosher Nostra, enslaved the world.

They still do, aided by the US military and hiding behind Old Glory, now covered with freakish graphics and odd colored stripes.  That flag just went down at Bagram Air Force Base yesterday where the US raped Aafia Siddiqui for 5 years and murdered her children.

Find out who that is.

VT’s folks put in the roads and sidewalks there, we know everything about America’s Auschwitz in Afghanistan and there are more of them around the world, we know each of them and what goes on there, hidden nukes, hidden prisons, hidden stockpiles of bio-weapons.

Ah, back to America’s South…

Slavery in the US was at the behest of Britain with the South a British colony ruled on behalf of the mill owners of Manchester, England (and Manchester, New Hampshire) where 6 year olds worked 16 hour days for a cup of flour made from diseased wheat.

America emptied West Africa, aided by the Kosher Nostra Dutch and their London partners so that Britain could build a society described aptly by Len Deighton of inbred fake aristocrats and royals while maintaining a sub-standard…sub-survival life for their inhabitants and something far worse for the Irish or colonials.

Speak up and you were sent to Australia, an entire continent used as a concentration camp.

Do you think the US slaughtered the Indians on their own?  Who do you think owned the huge cattle ranches and railroads?  Not Americans, that was London cash that bought the extermination of native Americans.

Why do you think Lincoln probably said that “thing” about “fooling all of the people?”

Think of barefoot ignorant hillbillies dying to preserve slavery for the London banks?