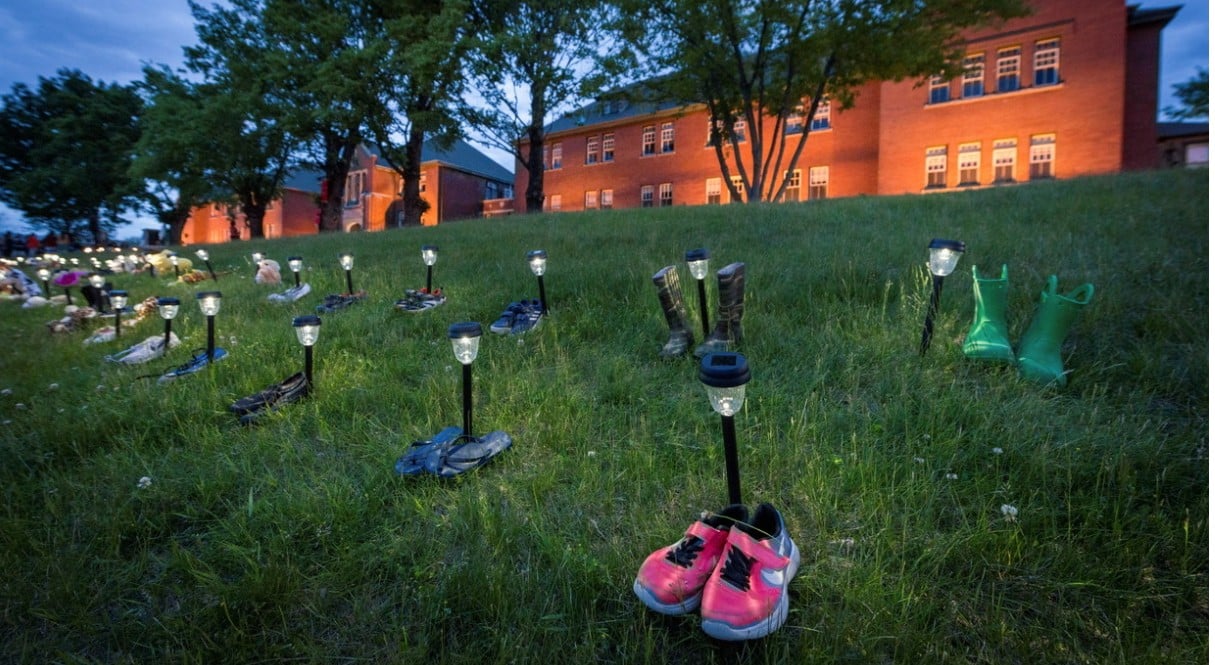 Eva Bartlett is a Canadian independent journalist and activist. She has spent years on the ground covering conflict zones in the Middle East, especially in Syria and Palestine (where she lived for nearly four years). Follow her on Twitter @EvaKBartlett

The reprehensible issue of what many deem “mass murder” of indigenous children in Canada’s Catholic school system has been in global headlines in recent weeks. But this should have been in the headlines decades ago.

The nearly 1,000 bodies of indigenous children in mass graves were recently found by ground-penetrating radar, said the Federation of Sovereign Indigenous First Nations (FSIN) and the Cowessess First Nation.

A reported 150,000 indigenous children were abducted and imprisoned in the Catholic schools, where they were tortured with the intent of erasing their culture and language, as were also sexually abused, had needles driven through their tongues for speaking their own language, were sterilized, among many other horrific practices.

The vandalism continued on Canada Day, with another 10 churches in Calgary targeted. After these findings made the news, people were rightly outraged. Catholic churches in British Columbia and Alberta have since been vandalized and set afire, including churches currently used by indigenous communities as meeting places, acts met with disgust by many indigenous, saying vandalism isn’t justice.

The premier of Alberta, Jason Kenney, denounced the vandalization of an African Evangelical Church, noting that the congregation is “made up entirely of new Canadians, many of whom came here as refugees fleeing countries where Churches are often vandalized & burned down.”

While some have justified the vandalization of the churches as a push for justice, others questioned whether vandalized or burned mosques or synagogues would also receive the same approval.

After Prime Minister Trudeau spoke of “reconciliation” and how “our relationship with indigenous peoples” has evolved, people rightly called out the government of Canada for empty talk, noting indigenous communities around the country frequently lack clean drinking water. Then, there’s the issue that aside from an official apology, the government hasn’t charged or tried anyone for these crimes.

A report first published in March 2016 by the International Tribunal for the Disappeared of Canada (ITDC) has since apparently been heavily censored and removed from Google search results.

It addressed the “Truth and Reconciliation Commission” carried out by the government and churches, calling it “a rapid in-house response by church and state designed to present their own self-serving narrative of their Indian residential schools crimes,” noting it “was created by the same institutions of church and state that were responsible for the residential school crimes being investigated.”

The synopsis notes that the crimes were “legally authorized, sanctioned and protected by every level of government, church and police in Canada,” and “amounted to deliberate genocide.”

It refers to horrifying facts that the average Canadian likely doesn’t know, including that “Native children began dying in droves the very first year the residential schools opened in 1889, at an average death rate of nearly 50%.” This, it emphasized, continued for the next five decades, “despite constant complaints and reports by doctors who inspected the schools.”

The deaths were caused by “a continual denial of regular food, clothing and proper sanitation to children interned in the schools, amidst a regime of routine and systemic rapes, beatings, tortures and killings: conditions that continued unabated for over a century, from 1889 to 1996.”

While I fully stand with the push for justice for the manifold crimes committed against the indigenous peoples in what is now Canada, I do wonder, why is this making headlines now? It’s not like these are new revelations.

Ostensibly the reason these mass graves are in the news now is due to their recent discovery. But, others point out that indigenous have for decades said there were mass graves, but were met with silence.

Indeed, an article first published in May 2008 – and according to the author, rejected by Canadian media – spoke of a 1996 lawsuit launched by residential school survivors on the issue of the death and torture at residential schools. It noted that “residential school children were being buried ‘four or five to a grave’, and that the death rate in these schools stayed constant at fifty percent for over forty years.”

It rightly asked: “Why is the disappearance of tens of thousands of native children in these schools not the subject of a major criminal investigation?”

That was 13 years ago, the lawsuit over two decades ago.

This is just one of, I’m sure, countless examples over the years, decades even, of calls to investigate the missing children and the criminal practices of the schools they were forced into.

So, while it would seem a good thing that the media is highlighting the issue of the barbaric ‘residential schools’, the fact that the media – and not just Canadian, but global media – is covering this should make us take pause. These are the same outlets that sold us WMDs in Iraq, chemical weapons in Syria, and innumerable lies to justify wars and invasions against sovereign nations.

Again, for me, the question is, why now is Canada discussing this issue? I don’t know the answer to that, but before getting swept up in toppling statues for ‘justice’, it is worth considering this and whether justice is really served by vandalization and the PM’s empty words.