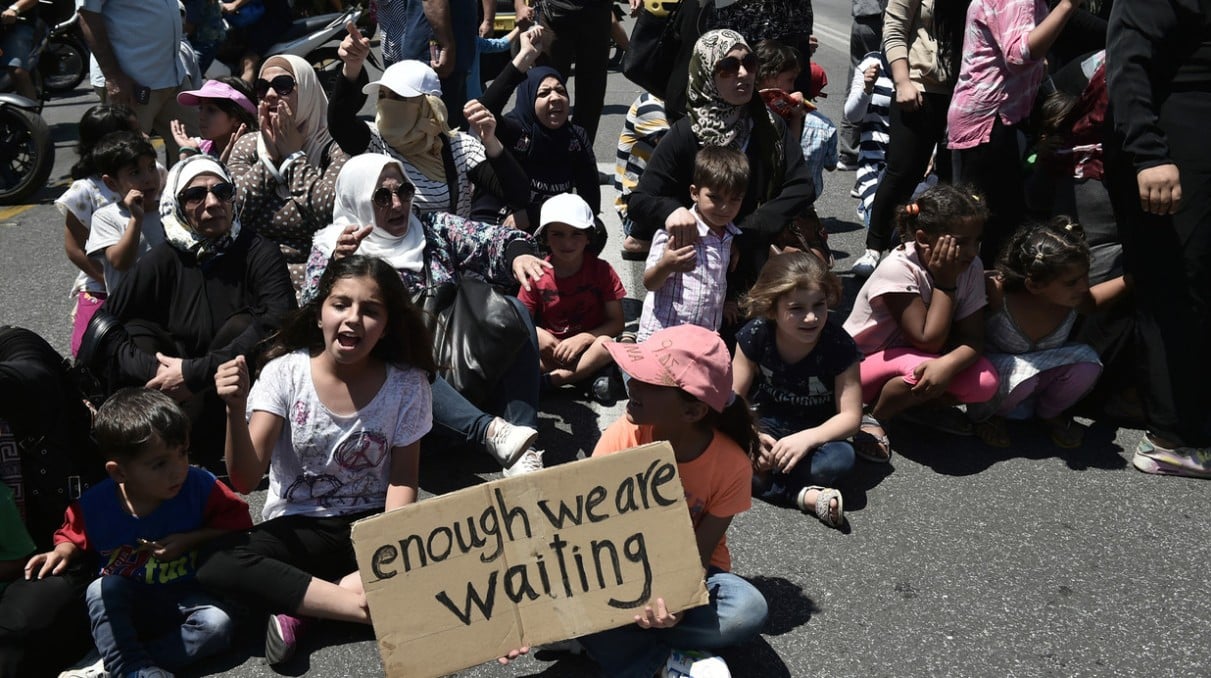 By Tarik Cyril Amar, an historian at Koç University in Istanbul working on Russia, Ukraine, and Eastern Europe, the history of World War II, the cultural Cold War, and the politics of memory. He tweets under @tarikcyrilamar.

RT: The Syrian civil war has scarred a proud country and sent millions fleeing for safety. The situation has become the greatest refugee crisis in recent memory and, of course, Russia and its presence in the area is getting the blame.

Conflict turns people into refugees, either within their own country or by forcing them to seek safety across borders. In recent years, though, there have been allegations that these flows of people have been “weaponized” against countries by supposedly antagonistic states. However, such allegations can themselves serve a purpose in a burgeoning information war.

Two recent cases serve to illustrate this: the ongoing crisis in Libya that began with revolution, conflict, and feckless Western intervention in 2011, and the civil war in Syria that began in the same year and, since then, has directly and indirectly pulled in several outside powers, including the United States and Russia.

Regarding Syria, such allegations came in 2016, when General Philip Breedlove, then head of the US European Command and NATO’s Supreme Allied Commander Europe, began speculating that Russia was deliberately pushing Syrian refugees out of the country to destabilize Western nations.In both cases, Moscow has been accused of “weaponizing” migrants, including refugees, or least trying to do so. The resulting crisis on the borders of southern EU states, the argument goes, is a deliberate ploy by the Kremlin.

In Libya, similar claims have also been made as far back as 2019, although with more speculative undertones. While Breedlove and the media who amplified his statements presented Russia’s purported “weaponization” of Syrian refugees as a fact, the accusations over Libya were more subtle, referring instead to something that Russia might one day do.

This has seen the narrative detach entirely from reality: once you start criticizing someone’s imagined intentions, there is little that can be done to prove you wrong. Except, of course, to simply not do the thing that was predicted. And that is precisely what happened – we are now deep into 2021, and there is no evidence of Russia “weaponizing” Libyan migrants.

When it comes to Syria, the issue is more complicated but can still be disentangled. Breedlove’s allegations were built on a simple fallacy: Russia’s presence in the region and its fight against insurgents implied, he believed, that its aim was not just winning on the battlefield but triggering refugee waves.

This one-sided analysis by a political army general was used to explain away why there are so many Syrian refugees. But the link between that fact and Russia’s intentions has merely been asserted, not evidenced, or even – with few exceptions – tested. To many in the West, high on neo-Cold War fervor and “Russiagate” delirium, it seems to just have “felt right” to point the finger at Moscow, much like the ignominious Steele dossier did at the same time.

The Syrian crisis is, according to UNICEF, the single “largest displacement crisis in the world,” with the UNHCR reporting 6.6 million refugees having fled Syria, and a further 6.7 million people internally displaced. Of those outside Syria’s borders, 5.6 million live in countries in the region, in the Middle East, not Europe.

Because the vast majority of Syrian refugees are not in Europe, let’s begin with them.

Russian military intervention, requested by the government in Damascus, began in practice at the end of September 2015, triggering international controversy. Russia’s critics have alleged war crimes are being committed, while Moscow and a number of other states have either rejected or refused to accept these criticisms.

Before that moment, between 1 January 2013, when the UN began collecting data, and mid-April 2013, their numbers rose quickly, from roughly 346,000 to 1.3 million, at a growth rate of about 78% per month. Until the last days of December 2014, a smaller but consistent and determined column of people left the country. Then, by the first days of January 2015, the most abrupt increase in refugees began.

This saw an explosion in the rate of new refugees, rising to about 3% per day, not per month.However, there remains the persistent claims that refugees are being “weaponized” in Syria against Western states. Statistics seem to contradict this, however.

According to the UNHCR, there were just over 4 million registered refugees in countries in the surrounding region – not including Europe – on the day of the first Russian airstrikes, 30 September 2015. Clearly, these refugees – or any that went to Europe before this date – cannot have been displaced by the Russian campaign.

When Russia first started its military campaign, including airstrikes against terrorists and militants, the number of refugees in the region around Syria rose from 4 million to almost 4.8 million. This was the highest rate of growth ever reached during the period of the Russian intervention. It was significant but, by comparison with preceding developments, not extraordinary. Moreover, it was followed by two almost stagnant plateaus, when the outflow of desperate people slowed.

Statistics go only so far. But whatever Churchill may have grumbled, they are much better than just making things up. What we can see from the figures discussed above is that the period of Russian intervention did not coincide with exceptional rates of growth in the number of refugees leaving Syria for countries in the Middle East, thereby accounting for the vast majority of those who left.

There was some increase as the efforts to push back militants began, but, in the absence of further evidence, it was most likely the unintentional result of increased fighting. A deliberate policy would have left a larger footprint. Moreover, of the total of 5.6 million who fled Syria for destinations in the region, 4 million had already left before Russia started military operations there.

These facts contradict the idea that Russia deliberately sought to increase refugee numbers and that its military intervention since September 2015 is more responsible than other fighting for Syria’s refugee catastrophe.

Having looked at the bulk of refugees leaving the Middle Eastern nation – those who did not end up in Europe, now let’s also quickly consider those who did. Here, as well, the gist of the matter is that timing does not support the claim of Russian “weaponization.” In reality, Europe’s “migrant crisis” was well on its way before the Russian military campaign started.

Could there have been some realpolitik in Moscow to take advantage of or relish the situation when geopolitical opponents felt pressure? Even if so, that would not at all be the same as a deliberate policy of making that pressure worse. It is a classic trope in Western thinking about Russia: if something may benefit Moscow, it must be the end result of some shadow Kremlin plan, even if there is no real evidence to support that.

Yet there is a larger issue here than simply an invented allegation, because talk of “weaponizing” refugees distracts our attention from more important issues about migration and xenophobia.

The unfounded talk of refugee “weaponization” also overshadows two real problems: the refugees themselves and their immense suffering, including – by conservative estimates – more than 20,000 deaths in the Mediterranean alone since 2014.

Moreover, why has the number of refugees worldwide reached a “record high,” according to the UNHCR? Once we focus on that question, far wider and grimmer issues emerge about governments and crises that do not lend itself to cheap info-war shots. But, through that lens, we might have a better chance to genuinely work out what needs to change to prevent a repeat of these tragic scenes.