Home WarZone Ottoman Empire can Rise Thanks to US. Turkish jihadists from Syria to... 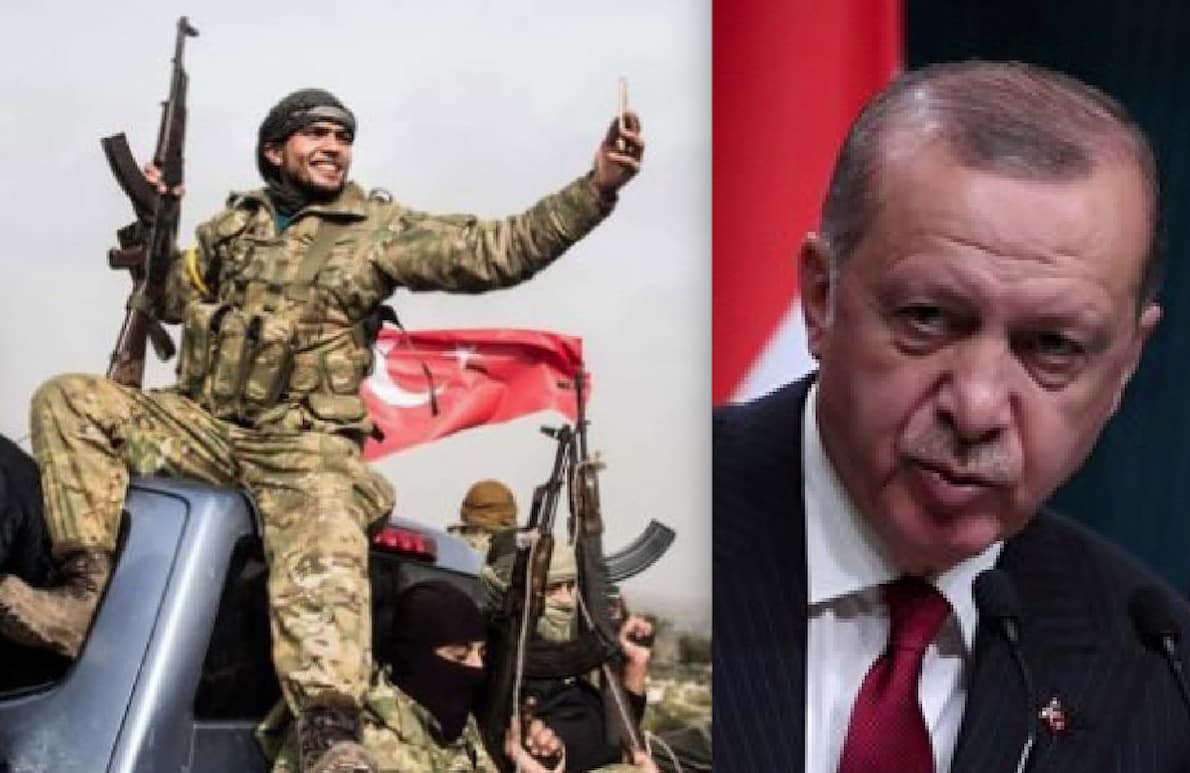 In the international geopolitical plans there are three different levels of operational action. The first is the political one entrusted to official diplomacy which legitimizes justifiable interventions in front of public opinion and the organization of the United Nations. The second is the governmental one which responds to national interests and often goes beyond any minimum confrontation with the UN and world diplomacy.

The third is the one piloted by the so-called Deep State, a potentate of politicians, financiers, Zionists, Freemasons and military 007, which legitimizes international operations without the consent of the countries in which it operates.

What happened in Libya and Syria responds to the logic of the Deep State which is in fact an expression of the New World Order. What is happening in Afghanistan, where for years the US has been amassing ISIS fighters in view of a destabilization of the neighboring countries of the former Soviet Union, is the confirmation of a strategic military plan aimed at strengthening the hegemony in the Middle East of the Brothers Muslims of Turkey at the high price of the resurgence of an Ottoman Empire so desired by Turkish President Recep Tayyip Erdogan. A true “dictator” according to the Italian Prime Minister Mario Draghi who publicly disputes him but in reality collaborates with him in order not to compromise an historic alliance in the field of the Weapons Lobby.

ISIS WARRIORS FREED BY US HERDED IN AFGHANISTAN NEAR RUSSIA

In every place in the Middle East where the American army, the most powerful in NATO before the Turkish one, withdraws its forces on the field, the jihadist mercenaries (financed and armed in Syria for the coup planned by the CIA against President Bashar Al Assad) take control of the territory.

It happened in Libya where US intelligence piloted the civil war on both fronts, through General Khalifa Haftar believed to have been trained by the CIA when he lived for years not far from Langley headquarters in Virginia, and through the multinational lobbying company Mercury, hired by the Tripoli government when Haftar chose the alliance with Russia.

Mercury’s intervention served to hide from the international media the use of jihadists financed by the Muslim Brotherhood of Turkey (and Qatar) among which former commanders of Isis and Al Qaeda (Al Nusra and Hayat Tahrir al Sham – HTS groups) operated.

The invasion of Rojava, the Kurdish-controlled territory in North East Syria, initiated by Erdogan in October 2019 produced the same effect, placing the enclave of Afrin (a place of shameful crimes against humanity) sheltered from operations of reconquest by the Syrian army like Hasaka, where the interruption of the water supply is the inhuman weapon used daily by pro-Turkish mercenaries.

Turkey’s intervention in Azerbaijan during the brief conflict in the disputed territories claimed by Armenia was so decisive that it allowed the Turks to legitimize their football matches in the European Championships in Baku. Now, as the Syrian Observatory for Human Rights reports, the bloodthirsty pro-Turkish jihadists are arriving in Afghanistan where the withdrawal of the American invaders has been 90% completed.

More than the occupation of a strategic geopolitical space, in the cold war with Russia, a changing of the guard appears aimed at favoring a further consolidation of the planned Ottoman Empire in synergy with the allies of the armaments business: that is Qatar, United Kingdom and Italy.

posted on July,6, 2021 by Syrian Observatory for Human Rights

SOHR activists have reported a deal reached between the Turkish intelligence and leaders of its Syrian factions leasers either in Afrin or other areas under the control of the Turkish forces in Syria to move them to Afghanistan in Kabul, likewise similar transferring process to Libya and Nagorno.

However, the process would be different this time as the Turkish intelligence will recruit those mercenaries via Turkish security companies with official contracts. It is worth noting that the process would start in September under the supervision of the Turkish intelligence because the Syrian faction’s members don’t trust their leaders. The main task of those mercenaries will be protecting Kabul airport, governmental institutions and headquarters and the international forces.

The sources added that the Turkish side wants to play with the international law by registering those mercenaries as working in security companies to legalize their presence in Kabul to preserve a good image in front of the international society.

On the other hand, those mercenaries wouldn’t take part in any military operation against Taliban and they will work with monthly salaries varied from 2,000 to 3,000 US dollars. But, the issue of transferring the mercenaries to Kabul is still under consideration till the moment and hasn’t reached the level of execution or even preparation.