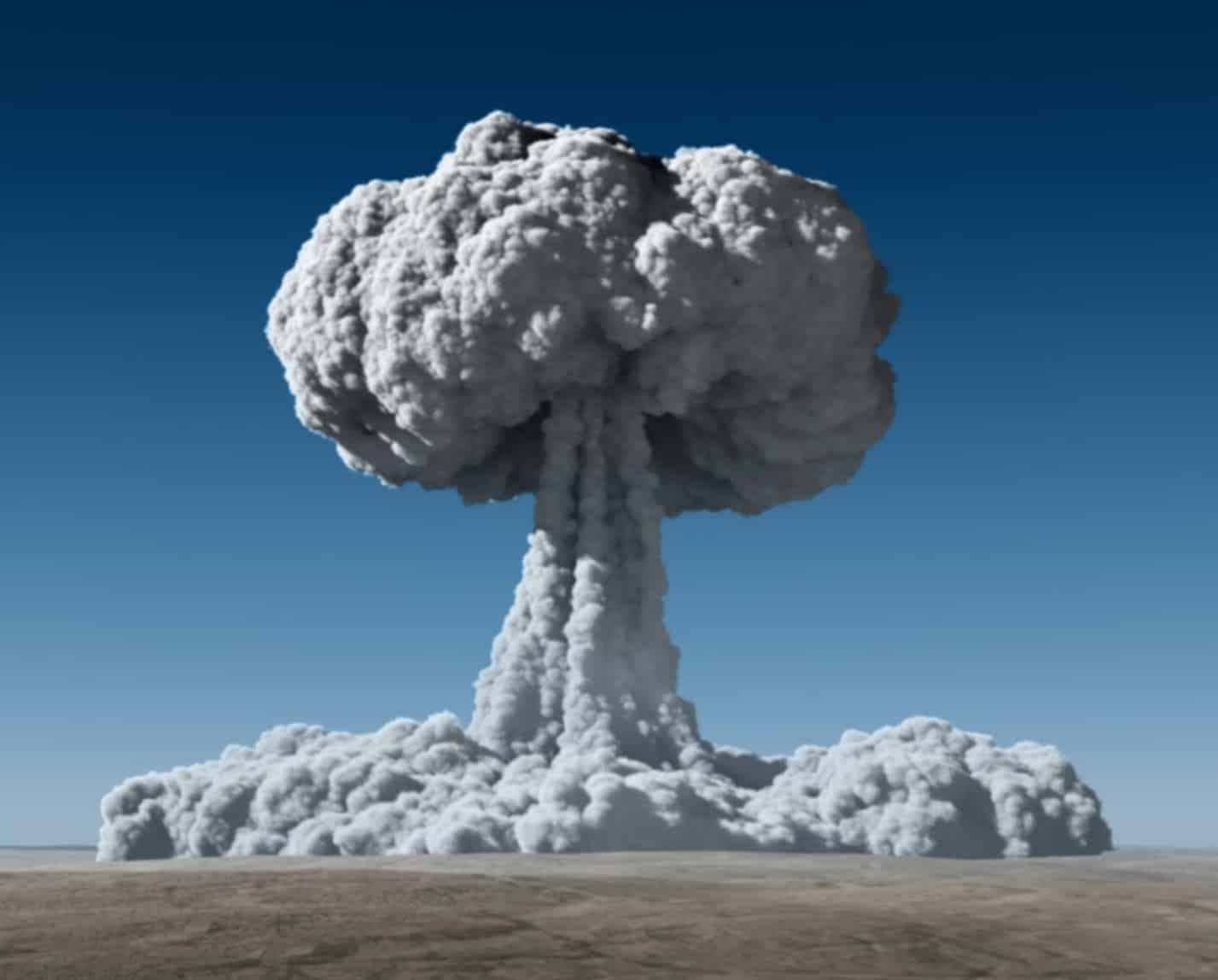 by Ian Greenhalgh with Jeff Smith

We have entered a new nuclear age, one far more dangerous and deadly than the Cold War with its megatonnage held in check by the doctrine of Mutually Assured Destruction. In this new age, the nukes are many times smaller, and the chance of their use many times greater.

Even worse, modern designs can be built simply and cheaply using any and all grades of fissile material which means that Nuclear Non-Proliferation is a forlorn hope and any country can afford to build them.

We present here the hard science behind modern small nukes in the hope that it makes the penny drop that these terrible weapons are within reach of all of the world’s bad guys and that spurs the good guys to do something about this most dangerous situation.

Considering that existing high-yield thermonuclear weapons will remain the principal component of strategic nuclear arsenals for quite a long time, it is likely that the first fifth-generation nuclear weapons to be developed by the nuclear-weapon States will be highly miniaturized explosives with yields in the 1 ton to 1 kiloton range, i.e., within the gap that today separates conventional weapons from nuclear weapons.

These “low-yield” nuclear weapons will not be considered as “weapons of mass destruction” and their construction will be possible for all countries, including the non-nuclear-weapon States.

In the following section, we will examine concepts that are under active scientific investigation and which have a strong potential to be developed into such new weapons.

To address the question of subcritical explosives, it is useful to recall some elements of neutronics. If k∞ is the average number of neutrons produced by fission (and possibly by other processes) per neutron absorbed in an infinite medium, and l the number of escaping neutrons leaking out of a finite assembly, the effective neutron multiplication factor, or criticality factor, is: k = k∞ − l.

The average lifetime of a neutron in an absorbing medium, i.e., the time τa between its production and absorption, is: λa τa = v where λa is the absorption mean free path and v the average neutron velocity. For each generation of neutrons, that is, for each interval of time, the number n of neutrons in the assembly is incremented by n(k − 1).

The time rate of change of the number of neutrons is, therefore, k−1 dn = n = αn, dt τa where α is called “Rossi α”.5 For k and τa constant, and with n(0) the initial number of neutrons, the solution of this equation is then exponential:

In a nuclear explosion, α is a function of time because all parameters, such as the geometry, the density, and the nuclear properties of the fissile material, change with time during the chain k−1 n(t) = n(0) exp ( t) τa.

This does not mean, that a subcritical assembly cannot be used to produce nuclear energy or to make a nuclear explosion. In effect,since at each generation of neutrons, the number n of neutrons in the assembly is multiplied by k, the total number neutrons produced by an initial number n(0) is n(0) n(∞) = n(0)(1 + k + k 2 + k 3 + …) =1−k.

To understand the potential advantage of this method for making a fission explosive it is important to recall that in a normal fission bomb the plutonium has to be made highly supercritical so that the divergent chain reaction can fully develop. This means that the plutonium has to be compressed much more than would be required to just reach criticality.

For example, a 1 gram plutonium pellet becomes critical at a density equal to about 100 times its normal density. However, to produce a significant yield, it is necessary to further compress the pellet to increase its density by an additional factor of about 10.

On the other hand, in a subcritical device, it is sufficient to reach k ≈ 1, an advantage that is especially significant for micro fission explosives containing less than a few grams of fissile materials. However, compared to a normal nuclear explosive (in which a few neutrons are in principle enough to start the chain reaction. In a first approximation, α ≈ vχN0 σf (ν − 1), where σf is the fission cross-section, ν the number of neutrons per fission and χN0 the fissile nuclei number density, with χ the compression factor reaction) the disadvantage of a subcritical device is that it needs a very powerful neutron generator to supply the relatively large number of initial neutrons n(0).

The results of a simulated subcritical burn of small pellets of plutonium having weights of 14, 70, and 700 milligrams each. With the goal of determining (as a function of compression) the number of initial neutrons required for 100% burn; corresponded to the release of 240, 1’200, and 12’000 kg of fission energy.

Obviously, yields of between 0.24 and 12 tons of TNT are of considerable military interest. Moreover, in the subcritical burn, the quality of the fissile material is of little importance: reactor-grade plutonium is just as good as weapons-grade plutonium.

With a fissile material density on the order of 103 to 104 g/cm3, i.e., for compression factors on the order of 100 to 1’000, the number of initial neutrons required for the complete burn is about 1018. In that same range, the compression work to reach the necessary plutonium density is equivalent to the energy content of about 100 g of chemical explosives.

Assuming a 10% conversion efficiency of the chemical energy into compression work, this means that with 1 kg of high explosives and less than a gram of plutonium, it is possible to produce a very compact fifth-generation fission explosive with a yield of several tons.

It can be seen that at a sufficient compression level the number of initial neutrons decreases dramatically. This is because when k → 1, the gain increases as the assembly approaches criticality where, in principle, a single neutron is enough to start a chain reaction. This leads to the idea of micro fission explosives in which a small pellet of fissile material is driven to criticality by a laser.

At first, it was thought that this method could be used to ignite fusion materials, and thus to provide an easy route to ICF and almost pure-fusion explosives for military purposes. But it was soon discovered that a major difficulty with micro fission was the problem of the initiation of the chain reaction.

Indeed, in micro fission, the stagnation time of a highly compressed pellet is so short that the probability of spontaneous fission releasing an initial neutron is negligible. Moreover, the use of an external source of neutrons is almost impossible because it is very difficult to deliver and focus a stream of neutrons onto a very small target at just the right time.

Hence, it was suggested that the initial neutrons could come from DT fusion reactions produced in the center (or in the reflector ) of the fissile pellet. However, as with ICF pellets surrounded by a heavy tamper to increase the confinement time, it is always better to work with a pure fusion target than with a hybrid fusion-fission target. This is because DT is easier to compress than any heavier material, and because the specific energy content of DT is higher than that of fissile materials. Therefore, it is much more attractive to develop micro fusion rather than micro fission devices. Nevertheless, a micro fission device could be used to implode a more powerful fusion device.

In summary, a critical or subcritical micro fission device can in principle serve as a low yield explosive or as a primary to compress higher yield fission or fusion pellet. To do that, it is necessary to find a means to achieve the required compression, as well as a suitable source of neutrons to initiate the fission reactions, two things for which there was no practical solution in sight until recently.

The problem with compression is that the maximum pressure and the detonation velocity of existing chemical explosives are not high enough to compress fissile materials to the required densities. Using a very sophisticated implosion technology, the maximum compression factor achievable is about 10.9. To increase the density of uranium, or plutonium, by another factor of 10 would require a “super-explosive” at least 45 times more powerful than any existing high explosive.

Compression to about 100 times normal metal density would, therefore, require a system of laser or particle beams — or the use of magnetic compression. All isotopes of plutonium are fissile for fast neutrons, e.g. and the problem of pre-initiation is absent in a subcritical burn.

A. To turn the concept of microinfusion into practice, two major problems are the compression method and the initial source of neutrons.

B. The yield of non-nuclear warheads of modern missiles and gravity bombs is limited by weight to a maximum of about 0.1 to a few tons of TNT.

C. The smallest amount of plutonium that can be made critical in a fast assembly is about 100 grams.

Table 1.2: Sequence of events and timing of a thermonuclear explosion.