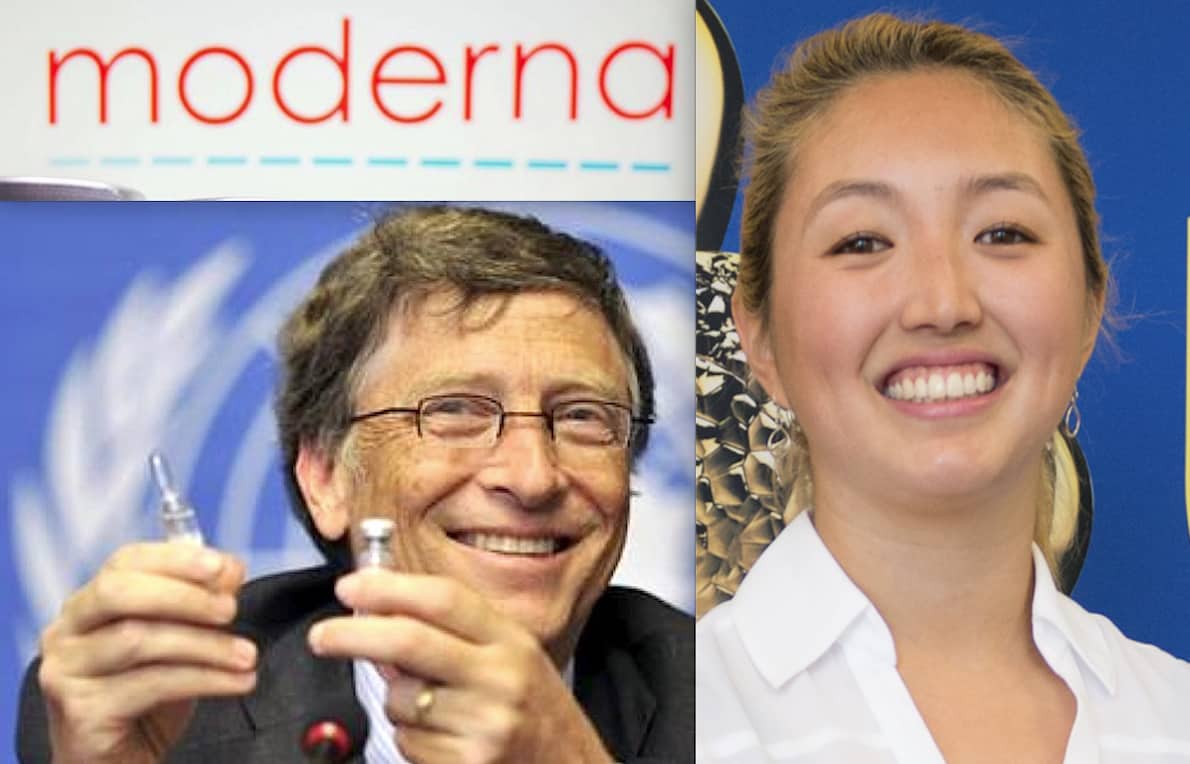 A research led by a Japanese woman and partially paid for by the Bill & Melinda Gates Foundation raises macroscopic doubts about the dangerous reactions triggered in the blood by the Moderna vaccine, the gene therapy based on messenger RNA (therefore signed mRNA), financed by Gates himself thanks to a patent of the now infamous Anthony Fauci that Professor Luc Montagnier, winner of the Nobel Prize for Medicine, did not hesitate to define “sorcerer’s apprentice”,  after revealing that the SARS-Cov-2 virus was built in the laboratory with HIV sequences in ” a deal between China and the US “..

The news is sensational because it signals the anomalous behavior of the Spike protein, equated to a toxin by the Canadian immunologist Bimar Bridle, associate professor of the University of Guelph (Ontario, Canada) who first revealed the importance of the study conducted by researcher Alana F. Ogata of the Department of Pathology and Division of Infectious Diseases of Brigham and Women’s Hospital in Boston (Massachussets, USA), of the Wyss Institute for Biologically Inspired Engineering of Harvard University in the same city at Harvard Medical School.

This research was supported by the fundamental contribution of Professor David R. Walt, active in the same health centers, but also the inventor of Simoa technology (developed by the Quanterix corporation of which he is a shareholder), an ultra-sensitive immunoassay kit for the detection of antibodies in COVID-19 research and the Chitokine profile.

Just as previously reported by a Chinese research published in October by the prestigious specialist journal Nature which was given media coverage only by Gospa News, the crux of the problem and the danger of vaccines is in fact in the T chitokines that can develop an auto-immune reaction. such as to cause serious blood problems (such as thrombosis) but also, over time, lung injury due to pulmonary immunopathology.

The new work by the Boston scientists is based on the empirical analysis of the behavior of the Spike protein in 13 young health workers who have been administered the Moderna vaccine but comes to an alarm similar to that launched in the fall by research conducted in two prestigious universities of the China instead made on laboratory experiments on mice and on the analysis of an immense scientific literature of as many as 143 other published studies.

«Limitations of the current study include the small sample size and potential biases that result from enrolling healthy, young adults, which may not be representative of the general population. Future studies should also examine the dynamics of antigen production with neutralization antibodies. Nonetheless, evidence of systemic detection of spike and S1 protein production from the mRNA-1273 vaccine is significant and has not yet been described in any vaccine study, likely due to limitations in assay sensitivity and timing assessment. The clinical relevance of this finding is unknown and should be further explored. These data show that S1 antigen production after the initial vaccination can be detected by day one and is present beyond the site of injection and the associated regional lymph nodes. Induction of IgG and IgA immune responses can be detected as early as day five post vaccination and are associated with clearance of spike and S1 antigen in the systemic circulation».

«We hypothesize that the cellular immune responses triggered by T-cell activation, which would occur days after the vaccination, lead to direct killing of cells 9 presenting spike protein and an additional release of spike into the blood stream . The mechanisms underlying release of free S1 and the subsequent detection of the intact spike protein remain unclear and require further studies».

Translated from strictly scientific to journalistic language, it has an unequivocal sense: the way in which messenger RNA vaccines interact with the S protein of SArs-Cov-2 in relation to T cells is unknown.

The same cells were considered the “critical point” of the vaccines of the Chinese study which, in autumn 2020, invited Big Pharma to be cautious and to carry out more research on the issue, but was in fact hidden from the international scientific community that squared around the antidotes against Covid-19 now in an advanced phase of clinical trials. In short, as claimed by Montagnier himself and other experts, the entire world population has become an involuntary human guinea pig for these vaccines whose functioning is unknown.

But to understand the scope of this study it is necessary to have the skills of the Canadian immunologist-virologist Bridle who also unveiled an internal document of the American Pfizer (producer with the German BioNTech of the other Comirnaty mRNA vaccine) referring to blood circulation disorders and the complications of severe thrombosis: capable of causing cerebral hemorrhages on which the CDC (Center of Disease Control) initiated investigations in the USA after the untimely death of the Florida doctor, Gregory Michael or of triggering cardiac inflammation such as the one that caused the alert from the EMA (European Medicines Agency).

«In this review, we provide an overview of the experimental and clinical data obtained from recent SARS-CoV-2 vaccines trials, and highlight certain potential safety issues that require consideration when developing vaccines. Furthermore, we summarize several strategies utilized in the development of vaccines against other infectious viruses, such as severe acute respiratory syndrome coronavirus (SARS-CoV) and Middle East respiratory syndrome coronavirus (MERS-CoV), with the aim of aiding in the design of effective therapeutic approaches against SARS-CoV-2».

This, however, had already been written in October 2020 in the study entitled “A systematic review of candidates for the SARS-CoV-2 vaccine” effectively nullified by the “fast-track” authorizations, with conditional emergency authorizations, issued in December and January after the first clinical trials. The research was published in the specialist journal Nature but ignored by all media except Gospa News.

«Apart from the S protein, other proteins, such as the N protein, M protein, non-structural proteins (nsps), and accessory proteins, may have the potential to serve as antigens. Indeed, viral proteins and their interactions with host factors were associated with imbalanced host immune responses, such as low type I interferons (IFN-I) and IFN-III levels, and elevated pro-inflammatory cytokine levels (Fig.1a).30,31» wrote the Chinese scientists and then issued a lapidary sentence.

«Recent studies on cytokine changes in patients infected with SARS-CoV-2 also observed increased secretion of Th2 cytokines, which might contribute to the lung immunopathology. Thus, controlling the T-cell response must be considered when designing vaccines against SARS-CoV-2».

This is the same alarm launched by the recent study by the Japanese Ogata on the Moderna serum: a gene therapy that in recent days, according to the website of the lawyer Robert F. Kennedy jr, was responsible for a lethal cardiac inflammation in a very young girl 19-year-old American.