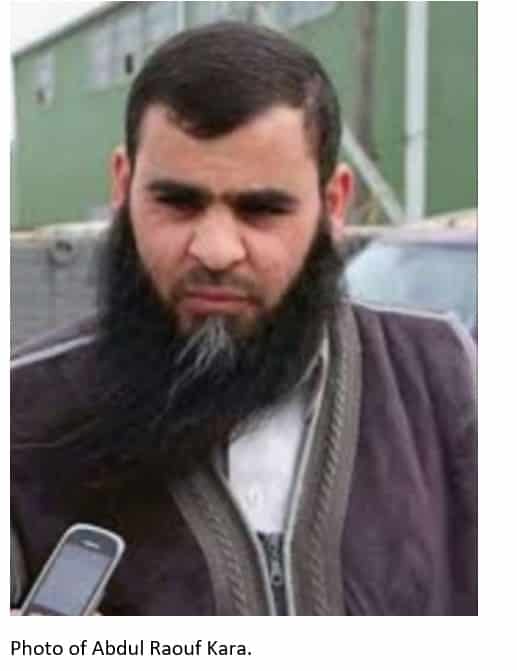 By  Michael R. Bradle for VT:

Ten years after the 2011 Libyan War, the peace process has suffered numerous setbacks, and no one can seem to agree on the path forward. Even with current discussions and planning, the legitimacy of any elections in December are still under debate and nothing solidified.

The entire rehabilitation of civil society in Libya has also been heavily impacted by the acts of one man who holds power over the prison system within Tripoli. Mr. Abdul Raouf Kara is the head of the Special Deterrence Force, one of the many armed brigades that continues to occupy Tripoli and holding the civil society hostage. Mr. Kara is no stranger to Libyan problems, his brigade under his direct control committed numerous atrocities in Libya during and after the War.

In 2014, Mr. Al-Saadi Gaddafi (son of Colonel Muammar Gaddafi) was returned to Libya after he was captured and placed under house arrest at the presidential palace in Niamey, Niger.  Upon his arrival in Tripoli after being handed over without formal legal action and violating his rights, he was sent to Abu Salim prison, which is under the control of the outlawed Mujahid organization.  He was beaten on his feet with a stick in direct violation of human rights laws.  After that, Mr. Saadi Gaddafi was received by the Special Deterrence Force, and he was transferred to the headquarters of the Deterrence Force, at the Matega base, where Mr. Kara is based. 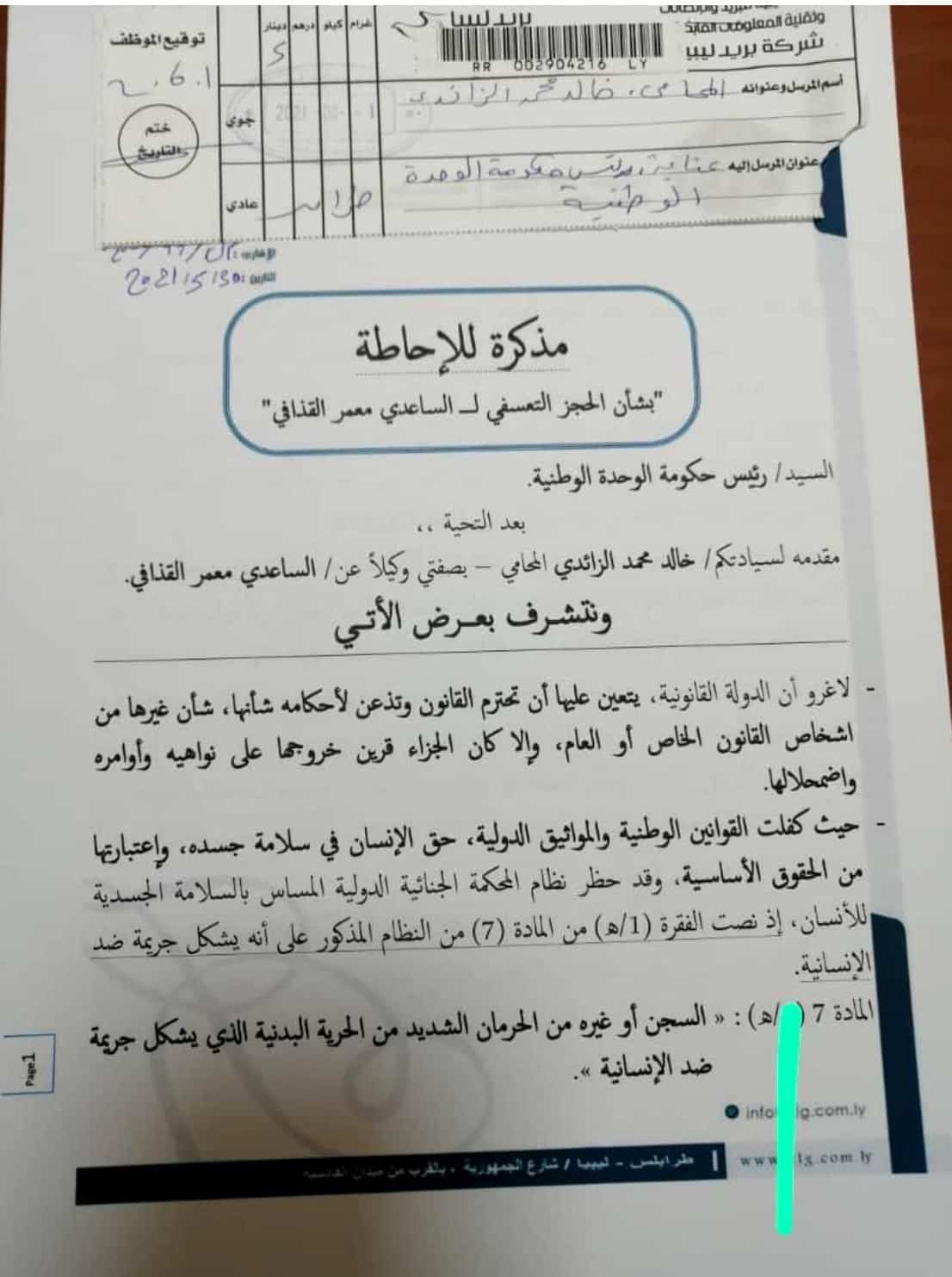 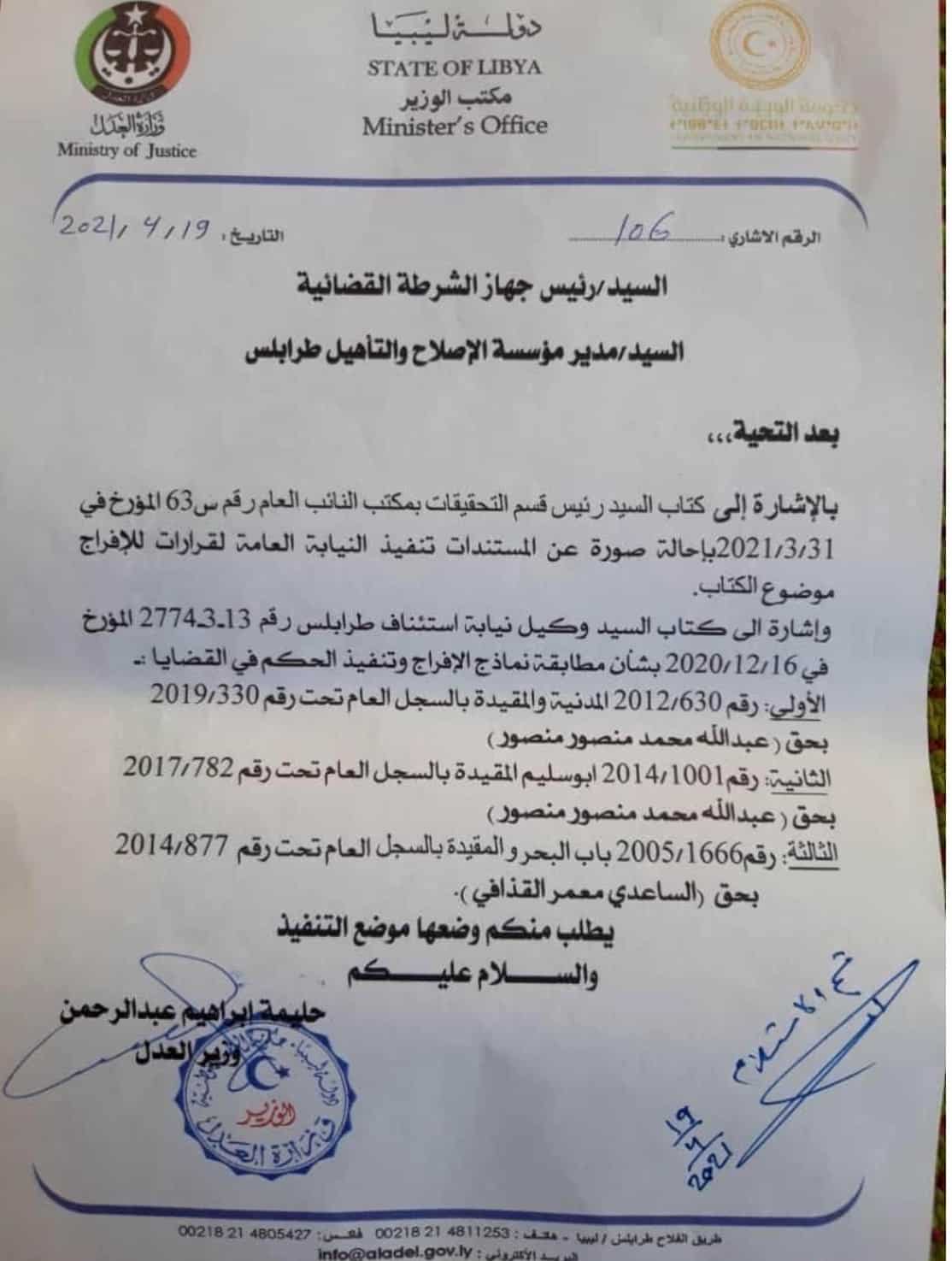 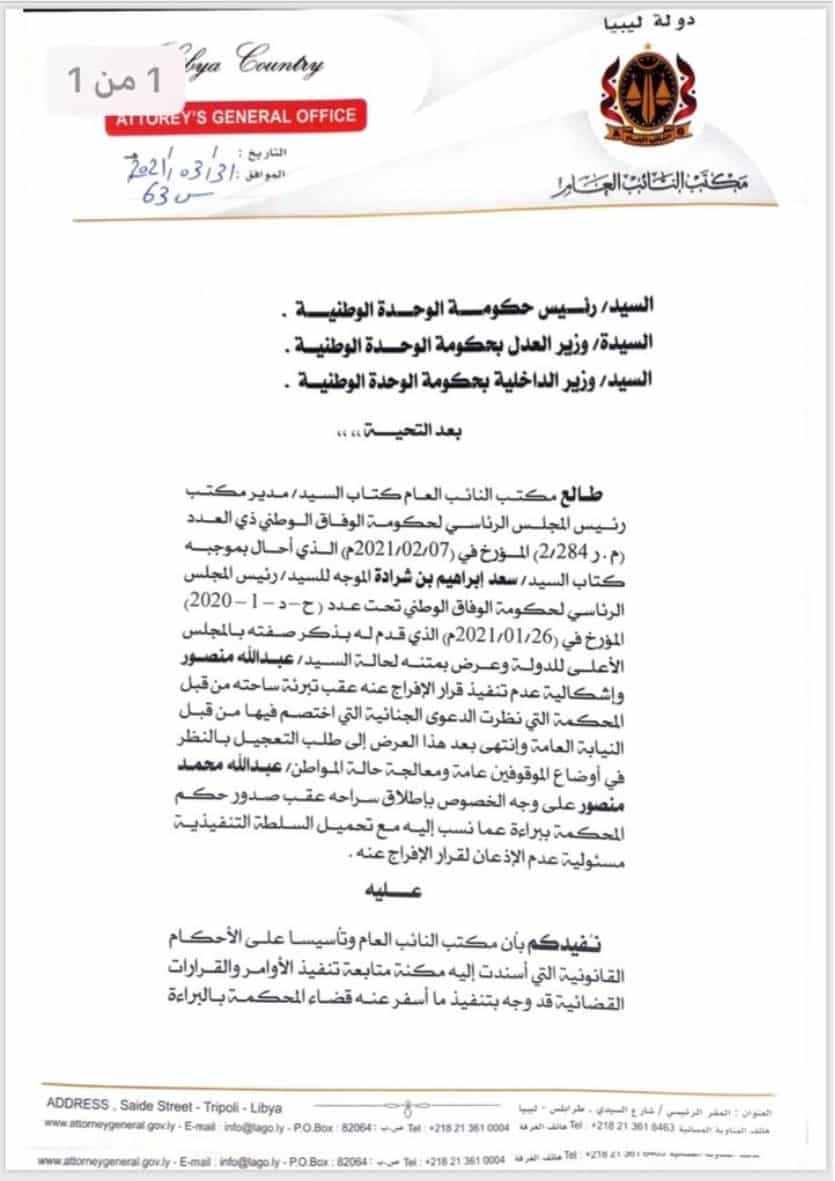 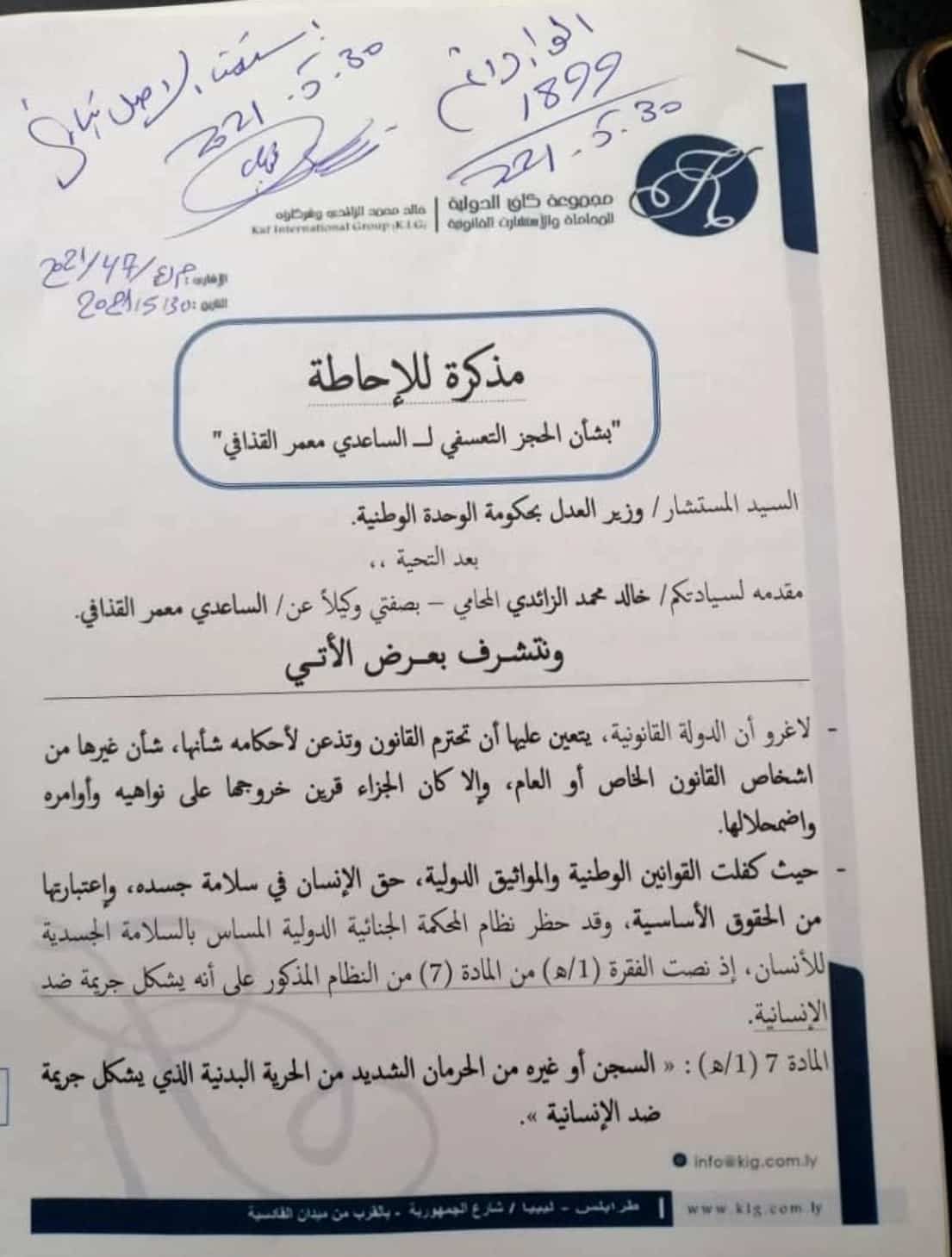 According to the ruling issued by the Tripoli Appeals Court on 03/04/2018 , with the unconditional release and implementation of the release order issued by the Public Defender based on the ruling Issued in Case No. (2011/877 ), registered under No. (166/2005 ); Bab al-Bahr and the judge pronounced innocence His Excellency the Chief: The preservation of human rights and freedom is a matter we must protect without discrimination or exception We always seek to reunite the Libyans and extend the hand of reconciliation in order to achieve national stability and social justice. The independence of the judiciary and respect for its provisions and their implementation are an essential pillar of the democratic state that we seek and work for collectively. It is dangerous for any society to waste judicial rulings and refrain from implementing them as the guarantor of the protection of rights and freedoms . The person concerned with your information and instructions in particular. Signed by Fathi Ali Bashagha, Minister of the Interior, Plenipotentiary 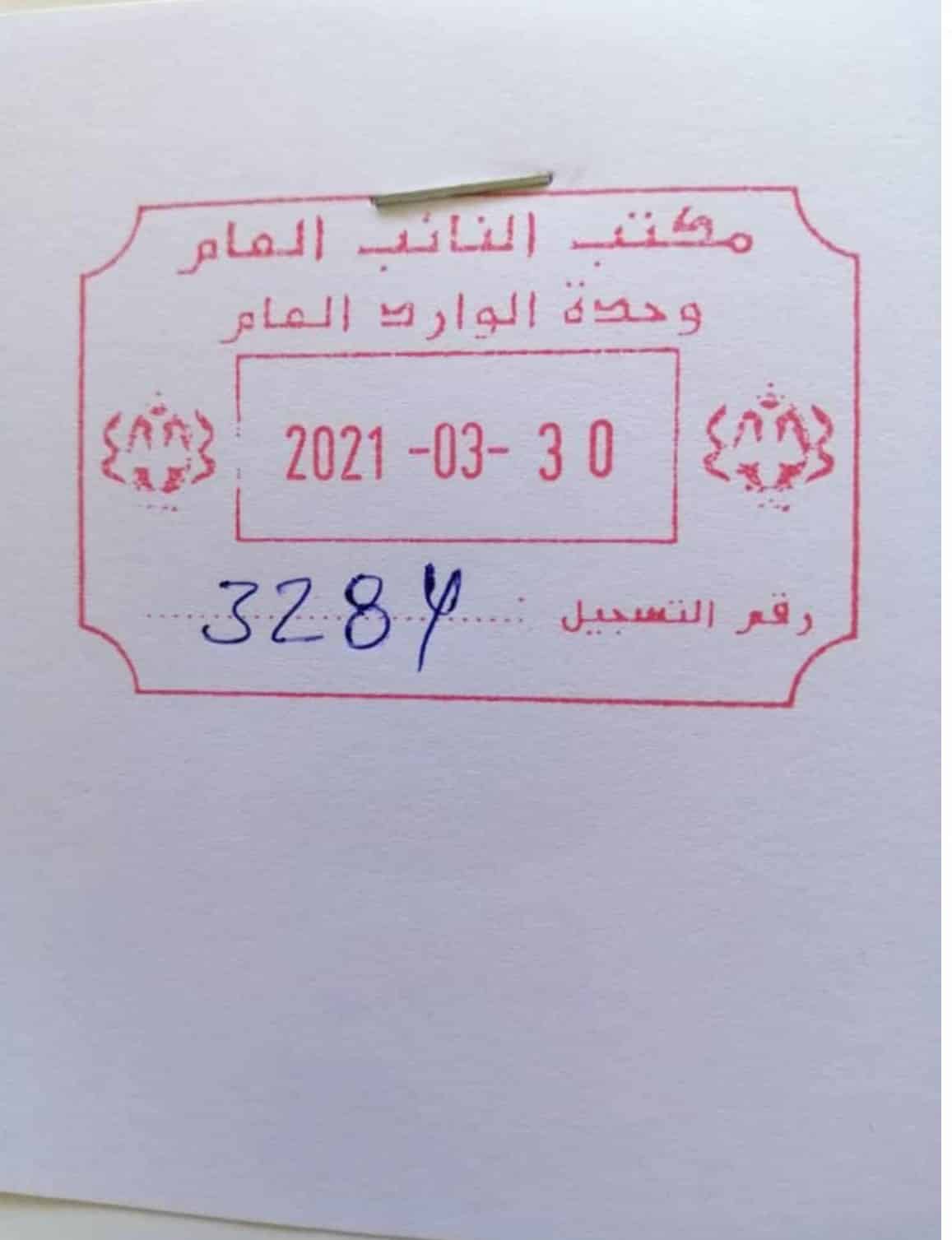 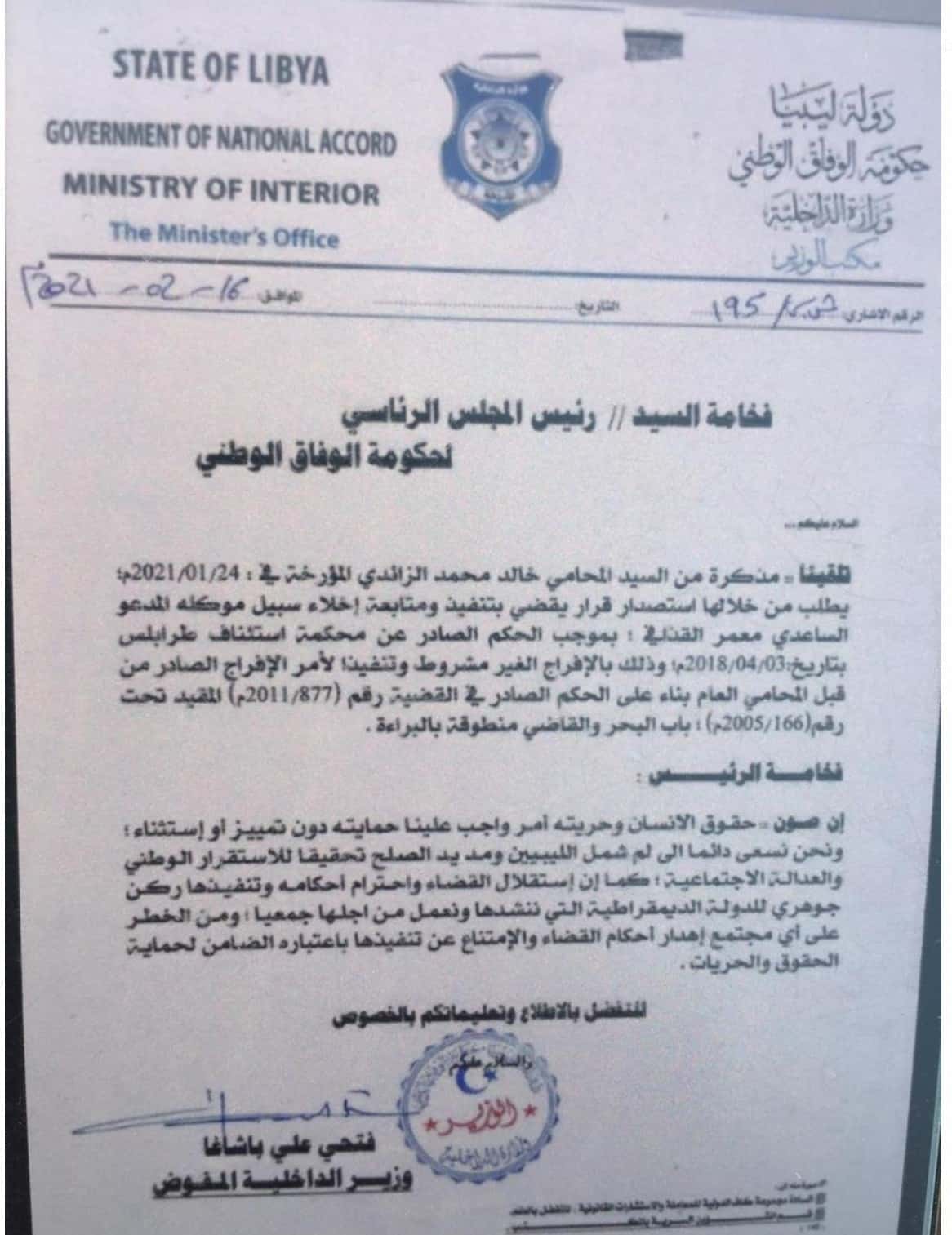 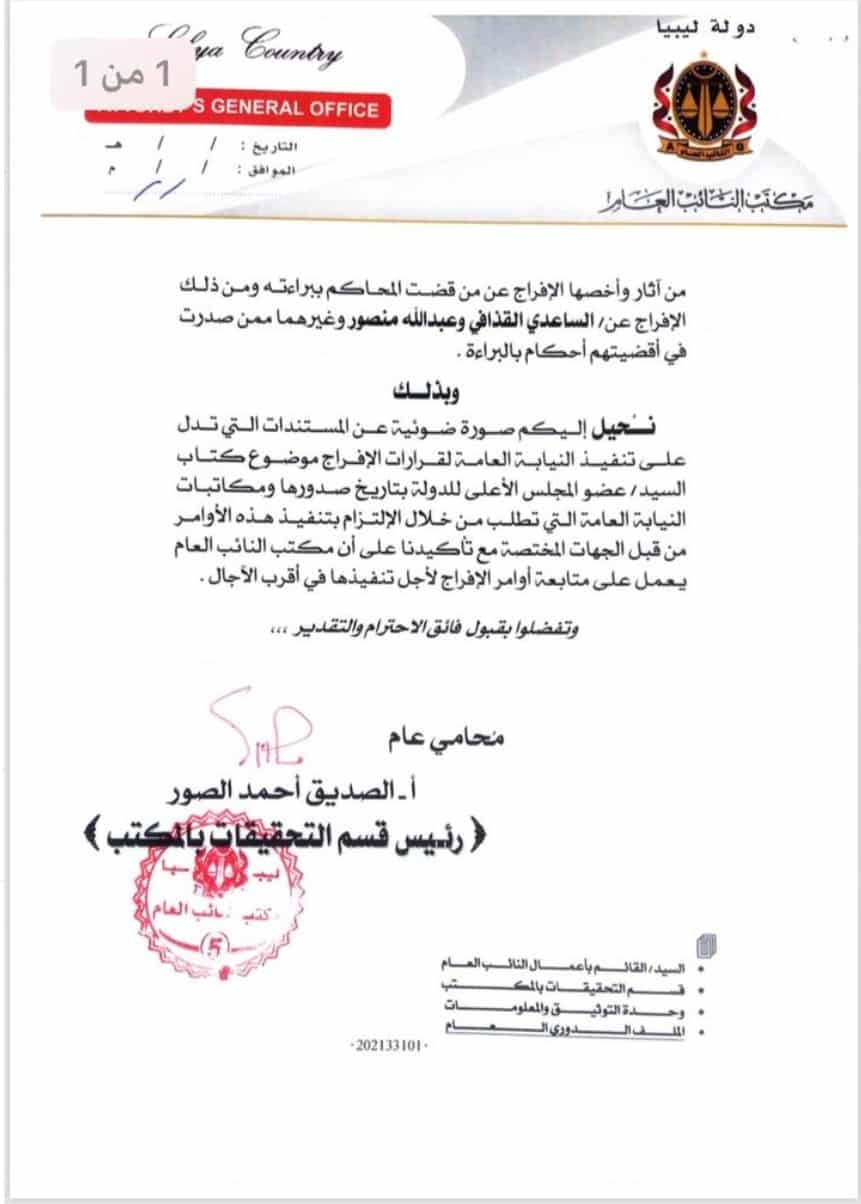 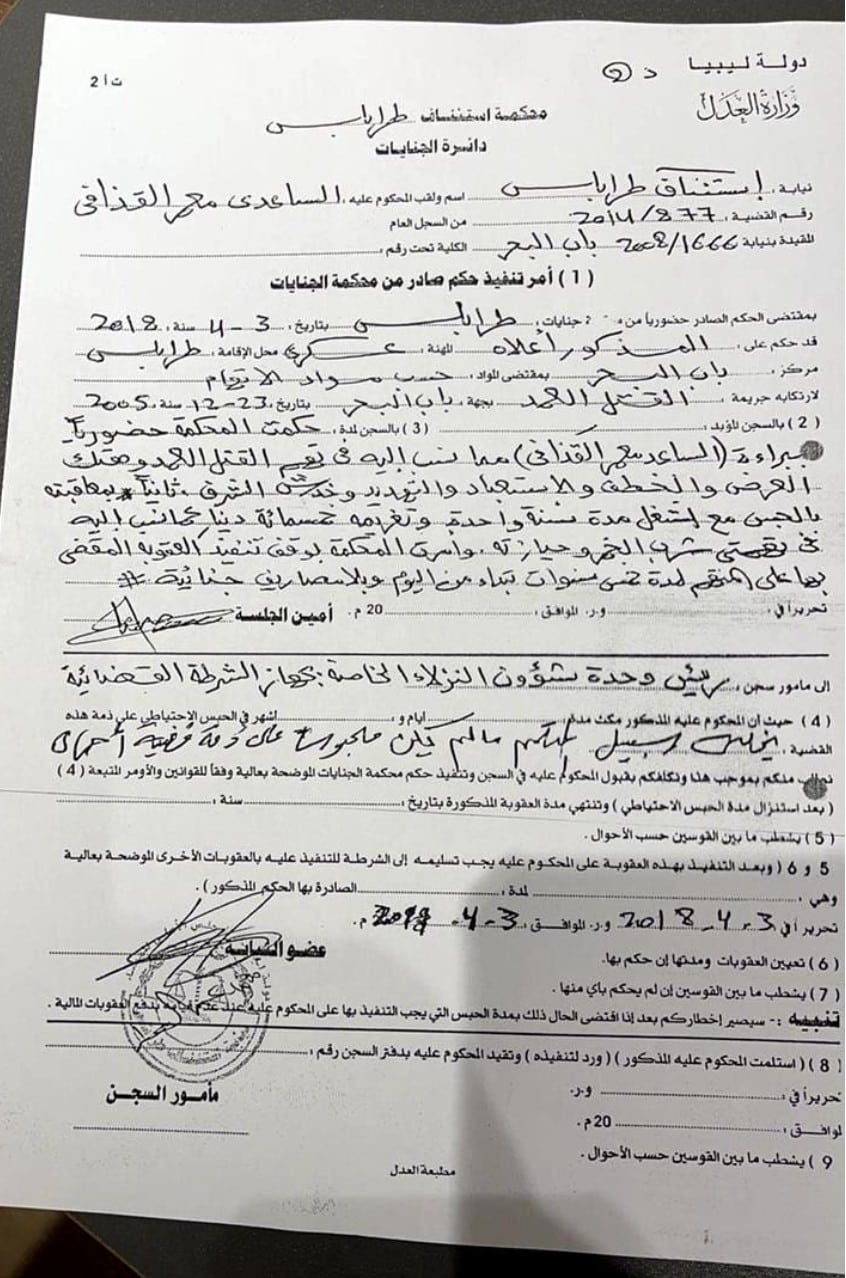 Three years later, on April 19, 2021, Mrs. Halima Ibrahim Abdel Rahman, Minister of Justice issued her speech or announcement of the release of the prisoner Mr. Saadi Muammar Gaddafi.  To this day, Mr. Kara continues to defy all orders and court orders issued by the Ministry of Justice of the UN-backed Government of National Accord appointed.  Mr. Kara has become the worst violator of human rights inside Libya as he has positioned himself as the ruler of prisons and ignores the rule of law.  If there was a core case for the International Criminal Court (ICC) to prosecute, Mr. Kara would surely have secured a place before the ICC.  How many others have been unlawfully detained, and their rights violated by Mr. Kara?  The Government of National Accord is rapidly losing credibility because the rule of law does not exist inside Tripoli, especially in the prison of the Deterrence Force, under the control of Mr. Kara.

Mr. Kara has become the worst violator of human rights inside Libya by self-appointing himself the ruler over the prisons and ignoring the rule of law. If there ever was a prime case for the International Criminal Court (ICC) to prosecute, Mr. Kara certainly has earned a place before the ICC. How many others are being illegally detained, and their rights abused by Mr. Kara? The Government of National Accord is fast losing any credibility because the rule of law does not exist inside Tripoli, especially at the Abu Salim Prison, under the control of Mr. Kara.

Unfortunately, the United Nations has ignored these continued abuses by Mr. Kara and the intentional refusal to release prisoners who have been pardoned or ordered to be released by the Tripoli Court of Appeals and the Ministry of Justice. If Libya is to become free again, it must first start with the rule of law and rights of all to be respected. It only takes one person in power to hijack the peace process. The award for obstruction and power grabbing goes to Mr. Kara. He alone has caused a huge barrier towards reconciliation and reuniting family members ten years after the Libyan government fell in 2011. The bigger question is when will the Minister of Justice bring formal charges against Mr. Kara in the Libyan Courts alleging human rights violations and for his blatant defiance of Court Orders and orders issued by the Ministry of Justice? When will he be held in contempt of Court and arrested and jailed at the Abu Salim Prison for his own criminal acts against Libyan citizens?