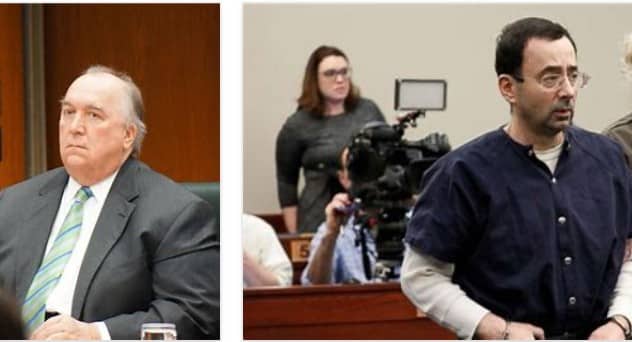 VT: Accusations made against FBI field agents (mostly known to VT) who this article says lied on reports to coverup the sex abuse scandal could well originate from the heart of the GOP.  Former Michigan governor John Engler (onetime associate of a certain ‘Senior Editor) took over managing the coverup, according to numerous sources because, we believe, top GOP political leaders in Michigan were directly involved in the abuse as well…

…in fact we are certain of it…politicians, sheriffs…and big contributors…

Daily Beast: The Justice Department’s independent inspector general released a scathing report Wednesday revealing a cascade of failures by the FBI in its investigation of former U.S. Gymnastics physician Larry Nassar that enabled him to abuse dozens of other athletes.

The watchdog blamed two FBI field offices in Indianapolis and Detroit for “limited follow-up” on the initial allegations made in 2015, saying the agents there “did not take any action to mitigate the risk to gymnasts that Nassar continued to treat.”

The end result was 70 more athletes being subjected to sexual abuse “under the guise of medical treatment,” the report said.

John Manly, a lawyer for Nassar’s victims, said that number is “incorrect,” and that the count should be more than 120 gymnasts.

“This is a devastating indictment of the FBI and the Department of Justice that multiple federal agents covered up Nassar’s abuse and child molestation. No one seems to give a damn about these little girls,” he said.

Army of Survivors, an organization that advocates for athletes who have been victims of sexual abuse and was founded by victims of Nassar, said in a statement, “It is unacceptable that multiple institutions, including the FBI, have failed to this extent and have put their selfishness above the wellbeing of young athletes.”

U.S.A. Gymnastics first reported allegations of sexual abuse against Nassar in July 2015. In September 2016, Michigan State University Police raided his house in response to dozens of complaints of sexual abuse and discovered thousands of pieces of child pornography. The 14-month delay by the FBI left Nassar free to continue seeing patients.

The report lays blame on the FBI field agents for not only disregarding the initial allegations but also making “materially false statements” in a bid to cover up their own mistakes.  read more…