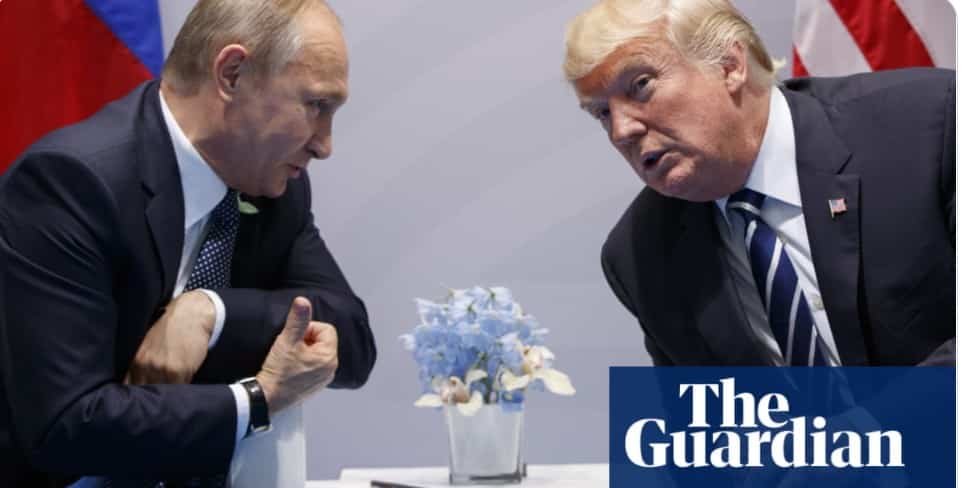 VT: When Trump had the DOJ target VT as Russian agents back in November, while we were actively not only working against Russia’s media blitz but advising the FBI as well, the long war on the real independent press became clear.

Even the WaPo was targeted, but reporting the targeting of VT for its opposition to now PROVEN Russian spy, Donald Trump is our proof.

The part of the media that feigns anger at misinformation is uncritically promoting a story today by Luke Harding that Russia was blackmailing Trump — the same Harding who has published many false stories, championed the Steele Dossier and claimed Trump was long a Russian agent. pic.twitter.com/6gL7XT59cz

Hell…look at our Wikpedia.  The Kosher Nostra has run Wikipedia from day one…But today…and every day…begin to notice the deep partnership between Russian intelligence and Tucker Carlson…

But we also think Russia got to others, many others, not just Carlson or Trump but most of those of the House and Senate who helped plan January 6…the planned Russian either takeover or takedown…

Then we noted that 3 organizations censored this story, RT, Sputnik and the New York Times….OMG 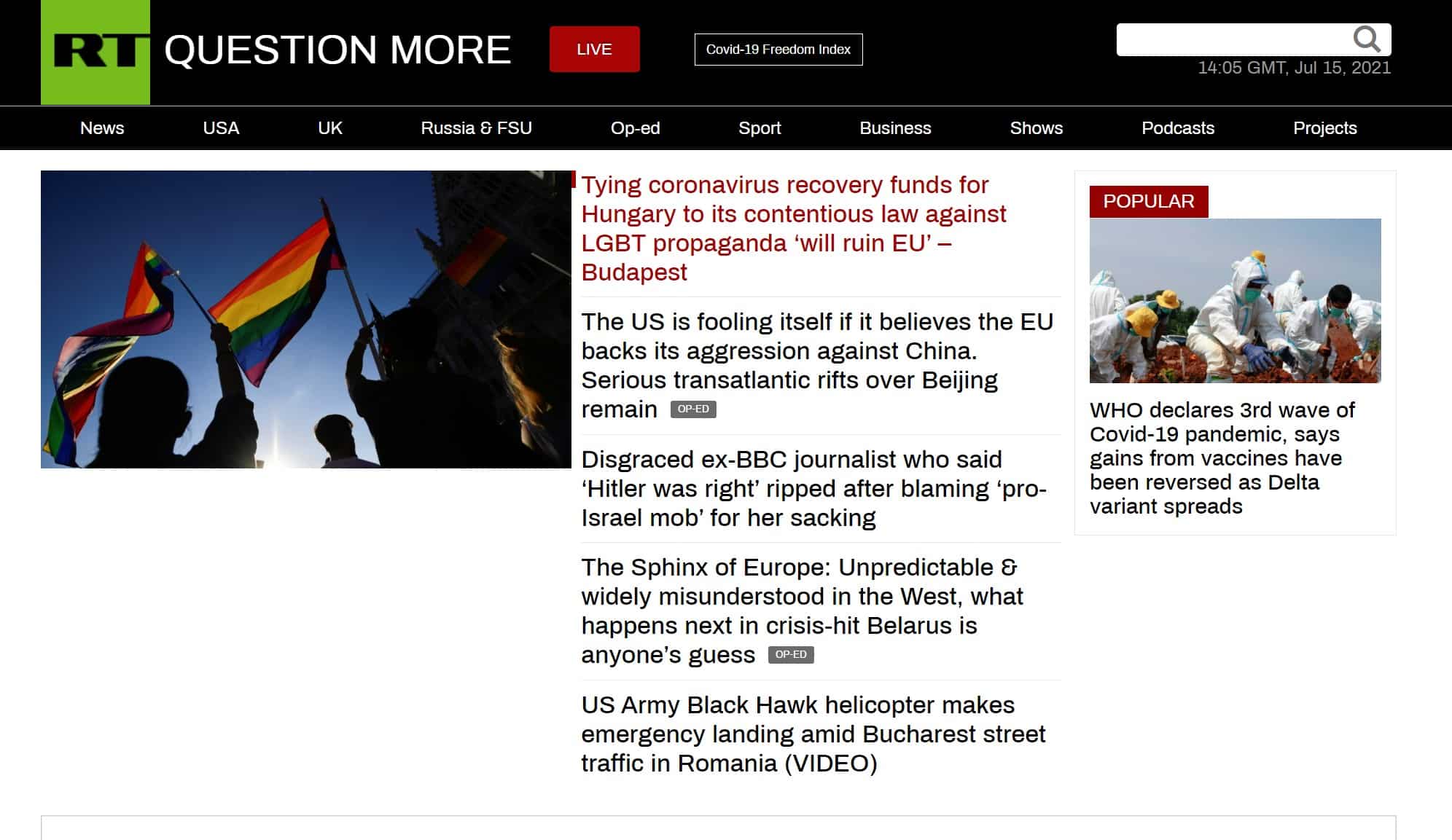 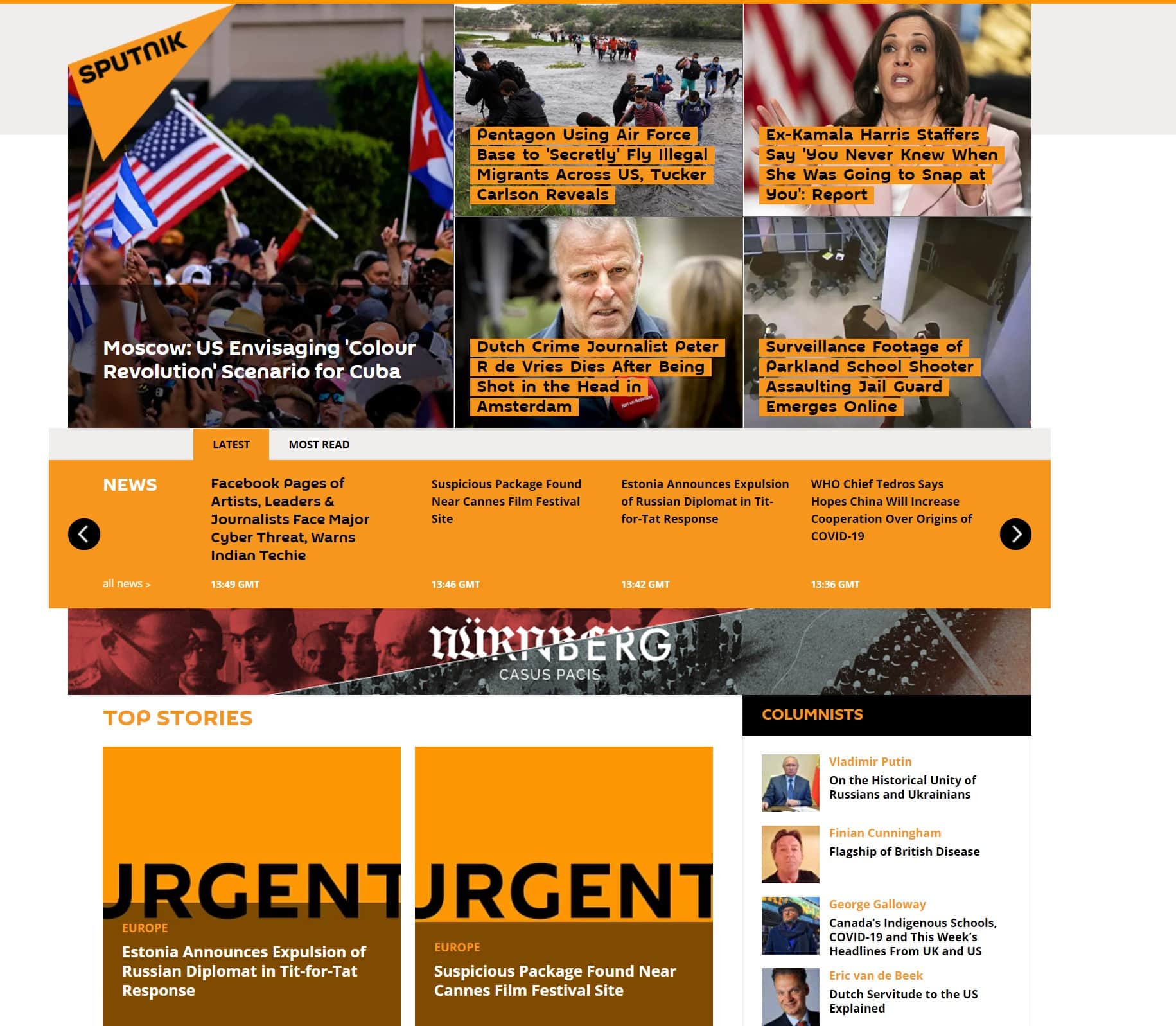 Now the reporting on this very real blockbuster…

Daily Beast: For years, there have been whispers that the Russian government holds compromising materials on Donald Trump. Now, a leak from the heart of the Kremlin appears to show them boasting about kompromat.

Exclusive: Leaked Putin papers appear to show #Russia’s plot to put a “mentally unstable” Donald Trump into the White House – my story with @julianborger in Washington and @dansabbagh in London https://t.co/rfgD3IfAll

The supposed leak obtained by The Guardian reportedly states that President Vladimir Putin personally approved a nefarious plan to throw Russia’s support behind Trump’s 2016 campaign. The document states that Putin, his spy chiefs, and top ministers agreed that a victory for a “mentally unstable” Trump would permanently weaken the United States.

According to the documents, Putin met with the heads of the military intel agency GRU, the domestic intel agency FSB, and the foreign intel agency SVR in January 2016 to push Trump into the presidency.

To cause chaos in the U.S.

The document also reportedly states that the Kremlin has so-called kompromat on Trump. It cryptically refers to “certain events” that happened during “non-official visits to Russian Federation territory.” The purported leak doesn’t explain what those events involved—only referring to an appendix that wasn’t attached the obtained document.

WTAF-LEVEL IMPORTANT: Kushner was trying to get a secret backdoor from the Russian Embassy to sext Putin *while Obama was still president.* pic.twitter.com/cp3pQn7tsi

Trump is known to have visited Moscow on multiple occasions in the decades before he was elected as president. One memorable section of the Steele dossier threw up some extraordinary but unsubstantiated claims about the former president and some Russian prostitutes in a Moscow hotel room when he jetted into Russia for the 2013 Miss Universe pageant.

The document allegedly offers more detail on what Kremlin leaders thought of Trump before he became president and why they wanted him to win. It reportedly describes the future president as an “impulsive, mentally unstable and unbalanced individual who suffers from an inferiority complex,” and, therefore, the “most promising candidate.”

The Guardian reports that the papers—which appear to be signed off on by Putin himself—state that a Kremlin plan to back Trump was agreed at a meeting of the national security council on Jan. 22, 2016. It reportedly recommends that the Kremlin uses “all possible force” to push Trump to victory and help him sow “social turmoil” in the United States.

The document reportedly predicts that a Trump win “will definitely lead to the destabilization of the U.S.’s sociopolitical system,” and a “social explosion.” The papers threaten to insert “media viruses” into American systems to help exacerbate the chaos of a Trump presidency. (read more…https://www.thedailybeast.com/kremlin-leak-appears-to-confirm-existence-of-trump-kompromat?ref=home) and from The Guardian: 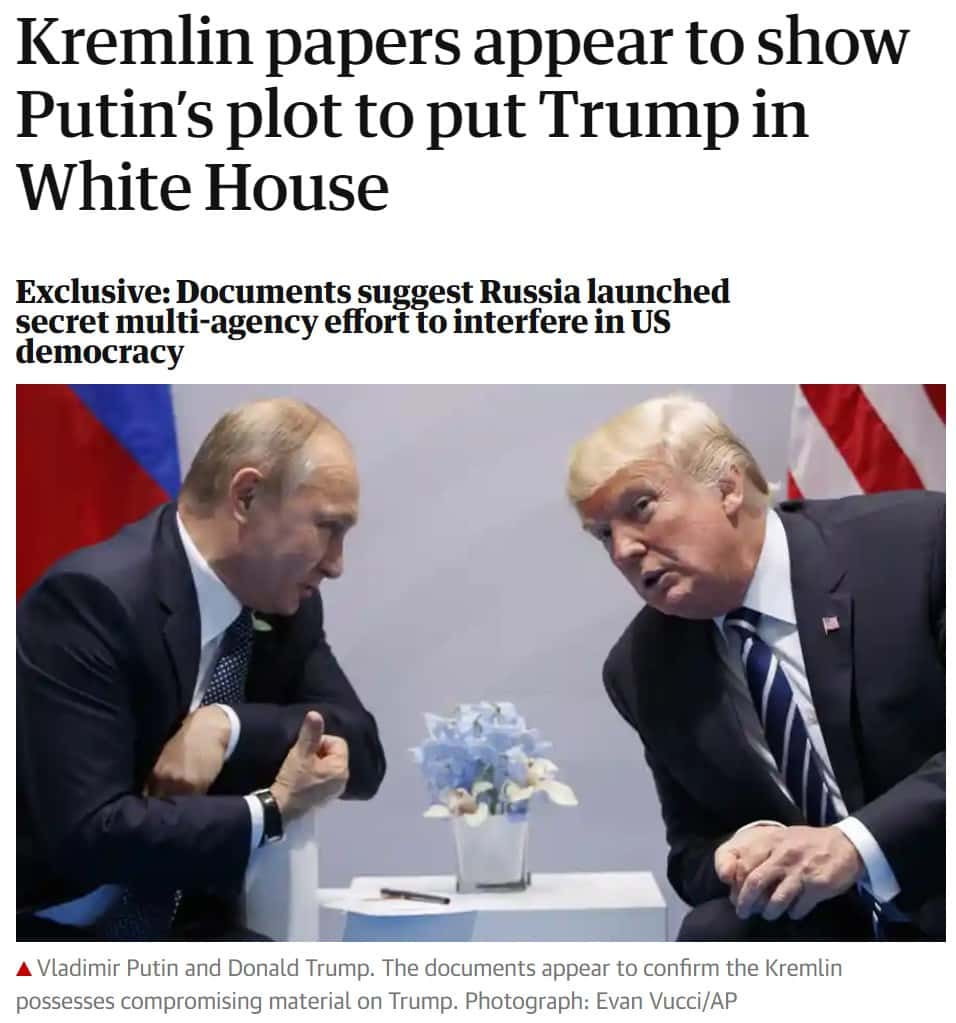 Vladimir Putin personally authorised a secret spy agency operation to support a “mentally unstable” Donald Trump in the 2016 US presidential election during a closed session of Russia’s national security council, according to what are assessed to be leaked Kremlin documents.

The key meeting took place on 22 January 2016, the papers suggest, with the Russian president, his spy chiefs and senior ministers all present.

They agreed a Trump White House would help secure Moscow’s strategic objectives, among them “social turmoil” in the US and a weakening of the American president’s negotiating position.

By this point Trump was the frontrunner in the Republican party’s nomination race. A report prepared by Putin’s expert department recommended Moscow use “all possible force” to ensure a Trump victory.

Western intelligence agencies are understood to have been aware of the documents for some months and to have carefully examined them. The papers, seen by the Guardian, seem to represent a serious and highly unusual leak from within the Kremlin.

The Guardian has shown the documents to independent experts who say they appear to be genuine. Incidental details come across as accurate. The overall tone and thrust is said to be consistent with Kremlin security thinking.

The report – “No 32-04 \ vd” – is classified as secret. It says Trump is the “most promising candidate” from the Kremlin’s point of view. The word in Russian is perspektivny.

There is a brief psychological assessment of Trump, who is described as an “impulsive, mentally unstable and unbalanced individual who suffers from an inferiority complex”.

There is also apparent confirmation that the Kremlin possesses kompromat, or potentially compromising material, on the future president, collected – the document says – from Trump’s earlier “non-official visits to Russian Federation territory”.

The paper refers to “certain events” that happened during Trump’s trips to Moscow. Security council members are invited to find details in appendix five, at paragraph five, the document states. It is unclear what the appendix contains.

“It is acutely necessary to use all possible force to facilitate his [Trump’s] election to the post of US president,” the paper says.

This would help bring about Russia’s favoured “theoretical political scenario”. A Trump win “will definitely lead to the destabilisation of the US’s sociopolitical system” and see hidden discontent burst into the open, it predicts.

There is no doubt that the meeting in January 2016 took place – and that it was convened inside the Kremlin.

An official photo of the occasion shows Putin at the head of the table, seated beneath a Russian Federation flag and a two-headed golden eagle. Russia’s then prime minister, Dmitry Medvedev, attended, together with the veteran foreign minister, Sergei Lavrov.

Also present were Sergei Shoigu, the defence minister in charge of the GRU, Russia’s military intelligence agency; Mikhail Fradkov, the then chief of Russia’s SVR foreign intelligence service; and Alexander Bortnikov, the boss of the FSB spy agency.Nikolai Patrushev, the FSB’s former director, attended too as security council secretary.

According to a press release, the discussion covered the economy and Moldova.

The document seen by the Guardian suggests the security council’s real, covert purpose was to discuss the confidential proposals drawn up by the president’s analytical service in response to US sanctions against Moscow.

The author appears to be Vladimir Symonenko, the senior official in charge of the Kremlin’s expert department – which provides Putin with analytical material and reports, some of them based on foreign intelligence.

The papers indicate that on 14 January 2016 Symonenko circulated a three-page executive summary of his team’s conclusions and recommendations.

In a signed order two days later, Putin instructed the then chief of his foreign policy directorate, Alexander Manzhosin, to convene a closed briefing of the national security council.

Its purpose was to further study the document, the order says. Manzhosin was given a deadline of five days to make arrangements.

What was said inside the second-floor Kremlin senate building room is unknown. But the president and his intelligence officials appear to have signed off on a multi-agency plan to interfere in US democracy, framed in terms of justified self-defence.

Various measures are cited that the Kremlin might adopt in response to what it sees as hostile acts from Washington. The paper lays out several American weaknesses. These include a “deepening political gulf between left and right”, the US’s “media-information” space, and an anti-establishment mood under President Barack Obama.

The paper does not name Hillary Clinton, Trump’s 2016 rival. It does suggest employing media resources to undermine leading US political figures.

There are paragraphs on how Russia might insert “media viruses” into American public life, which could become self-sustaining and self-replicating. These would alter mass consciousness, especially in certain groups, it says.

After the meeting, according to a separate leaked document, Putin issued a decree setting up a new and secret interdepartmental commission. Its urgent task was to realise the goals set out in the “special part” of document No 32-04 \ vd.

Members of the new working body were stated to include Shoigu, Fradkov and Bortnikov. Shoigu was named commission chair. The decree – ukaz in Russian – said the group should take practical steps against the US as soon as possible. These were justified on national security grounds and in accordance with a 2010 federal law, 390-FZ, which allows the council to formulate state policy on security matters.

According to the document, each spy agency was given a role. The defence minister was instructed to coordinate the work of subdivisions and services. Shoigu was also responsible for collecting and systematising necessary information and for “preparing measures to act on the information environment of the object” – a command, it seems, to hack sensitive American cyber-targets identified by the SVR.

Read more...https://www.theguardian.com/world/2021/jul/15/kremlin-papers-appear-to-show-putins-plot-to-put-trump-in-white-house
and from the Daily Mail: 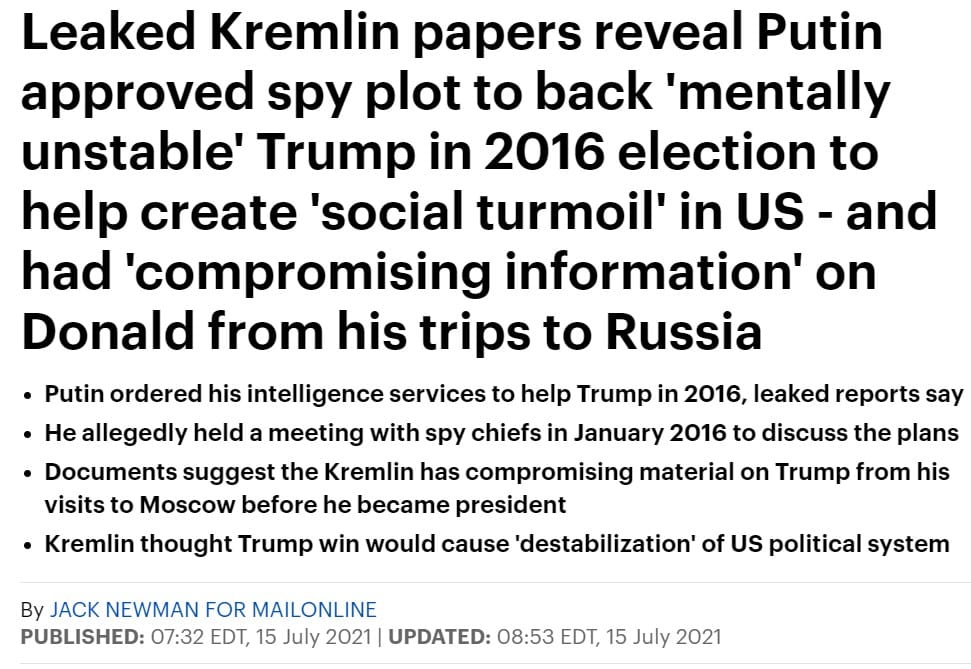