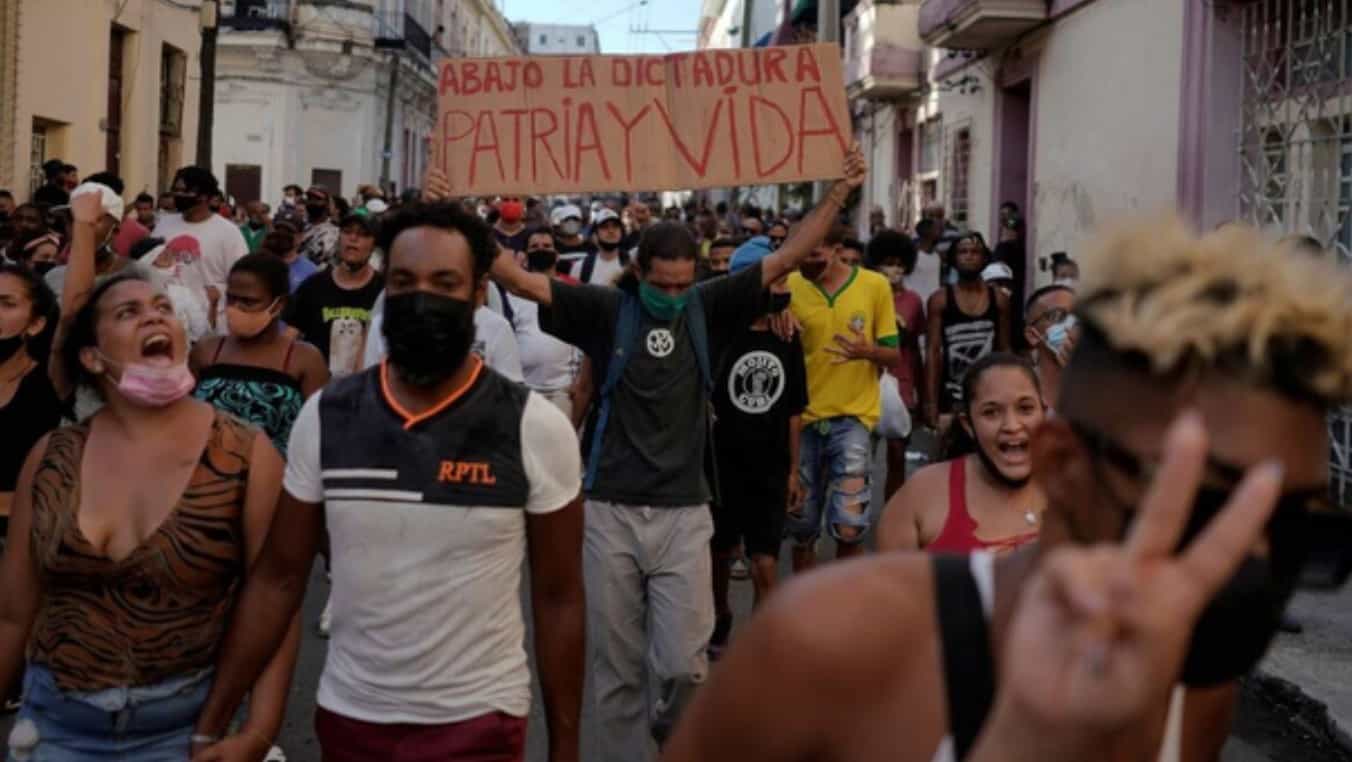 By Joe Wentrup
Street protests erupted across Cuba on July 11, 2021, once again placing Cuba in the worlds spotlight. I’m watching The Cuba Libre Story on Netflix at night and it’s a fascinating view. Many people don’t realize just how intimately entwined Cuba and America are, and just how deep their masonic ties go. Our man in Havana Joe Wentrup breaks it down for you here in a brief from ground zero. – Jack

Caribbean sovereignty comes at a price. Since Haiti gained its independence in 1791 through a slave revolt and became the first nation of its kind in the Western world, it has had to pay France for its freedom. Although its Cimarons taught Napoleon a lesson with their fighting prowess, Haiti was forced to pay billions of francs to the European “motherland” as a ransom. And all its open wounds are directly related to this exploitation.

Not even the largest of the Antilles could escape this fate: Cuba. Since the discovery of the “New World”, Cuba has been the key to the American continent. And the key is its symbol: Wind and currencies carried European ships almost automatically to its shores and its main port and capital, Havana. Only with the advent of motorized ships and airplanes did this role fade. But a geostrategic location is a geostrategic location.

When the Masonic project of the United States of America became strong enough to take on the Spanish and Hispanic, that is, the Jesuits and the Vatican, they did so (starting with Mexico). In 1896, José Martí, Antonio Maceo and Máximo Gómez led the Cuban people to war. They were all Freemasons. So was the American president William McKinley. Cuba’s new destiny was to become a semi-colony of the rising superpower, the United States.

The Vatican’s revenge was a young man with Marxist ideas and Jesuit upbringing: Fidel Castro. In January 1959, the same month that his revolution won back Cuba for the Latin American community, the Vatican announced a council that would change Catholicism forever. The Church of Liberation, a Polish pope, the fall of communism in the West, and the first visit of a pope to Cuba were all part of this development – as is the current Argentine pope, who is more of a Freemason than a Jesuit.

However, like France in the case of Haiti, the U.S. could not accept the loss of its (semi) colony. Since the Monroe Doctrine, the northern part of the continent considered its south its backyard. And Fidel threatened to close that door. With the help of his Russian ally, he created a Soviet-style regime that guaranteed economic and political stability, even if Fidel chose his own path more than once. And the whole island followed his lead.

While Cuba was developing its own Latin American flavor of socialism, it gave the United States a small gift that is still working its way to the highest levels of power: its former elites, who had fled the revolution. They took with them billions of dollars and a dense network of relationships, especially with the U.S. mafia, which also had to leave Cuba, and built Las Vegas as their Havana replacement, while the Cubans chose Miami as their main base. The two united once again when Kennedy betrayed them at the Bay of Pigs and made him pay …

Cuba did not achieve absolute sovereignty until 1991, with the demise of socialism in the West. The country was left on its own and had to learn bitterly to adapt to the capitalist economies that surrounded it. All these years it had to endure a U.S. embargo that prevented its natural incorporation. While the U.S. tried to starve the island, it leaned more and more on Europe, China and Latin America, especially Venezuela, whose oil revenues saved the service-oriented Cuban economy since 1999.

Slowly but steadily, Cuba improved economically and politically. It never lost its ability to adapt, and the dense social structure of a relatively small Caribbean island became a necessary feedback loop for its rather static party structure. Cuba is not a democracy in the Western sense of the word, but there are many ways to describe freedom. And perhaps there is more participation in a small socialist country of eleven million people than in a continental democracy too large to connect the elites to the people.

Back to the Cuban exiles in Miami, who became a major political player in the United States. Once they settled in Florida, they began to build a new network that included not only the mafia but also intelligence agencies and party leaders on both sides, turning their status as anti-communist exiles into big business. By controlling Florida, they controlled most U.S. elections since their arrival in 1959, because normally you have to win Florida to become president (being Biden an exception – if he actually won the election).

The Cuban exiles became a major player in the U.S., making Miami the economic center that Havana had been for centuries. But they were and still are Cubans, and they want their island back at any cost. And one of the characteristics of Hispanic cultures is their lack of pragmatism. Agreement or any kind of compromise is not an option. So it’s simply them or us (I do really hope I’m wrong here).

In their role as political actors, Cuban exiles have often managed to “convince” the U.S. government of their needs by creating facts on the ground. Bombings and assassinations are often part of their “discourse.” It is likely that they were behind the recent assassination of Haitian President Moise: The goal is to destabilize the entire Antilles as a means to invade Cuba as part of a bigger picture. The next step was to use Cuba’s painful economic suffocation to generate protests on the island through an army of chatbots and real Cuban exiles who filled social media with their shtick.

But the Cuban government is not going to be overthrown by its people. While discontent because of the lack of everything due to the hardened embargo and the plandemic became broad and general (thank you Mr. Trump, thank you soo much Dr. Fauci), there is not enough systemic fallout to reverse the power structure: Cuba is a country with an extremely low birth rate and even fake color revolutions are fought by the youth. External military intervention on the other hand would mean a direct clash with the interests of Russia and China, that became Cuba’s main allies. Such thing did not happen in Syria, nor will it happen here.

So what is the current tense situation good for? It is probably the beginning of a more intense phase of the new Cold War with a decadent West on one side and Asia (which here includes Russia), on the other. Cuban exiles will be able to maintain their exceptional status within the U.S., which has been challenged by hundreds of thousands of wealthy Venezuelans who have fled Chavism. Cuba will be more isolated, and its ties with Europe, based mainly on historical ties and tourism, will weaken. But the island will remain the key to the American continent, and this will lay in Russian and Chinese hands.

For us in Cuba, the main question is: How can we live a good life? How can we achieve an economy that feeds us? How can we produce enough food? How can we maintain and strengthen the feedback loops with the government to create a stable and prosperous country that represents the will of the people? How can we preserve our sovereignty without interference from the U.S. and/or globalists? How can we reach out to the people in exile who are looking for sincere and honest solutions? How can we maintain our ties with our brothers and sisters who live all over the world? There is no simple solution. And there is none at all within the old left-right scheme.

For on location journalism like this and what I personally deem to be the best and the brightest the internet has to offer subscribe for free to our newsletter or support us, because god knows we need it, on Patreon. Membership provides you with access to restricted posts. You can also buy my book Those Who Would Arouse Leviathan. Just click:  https://jackheart.org/