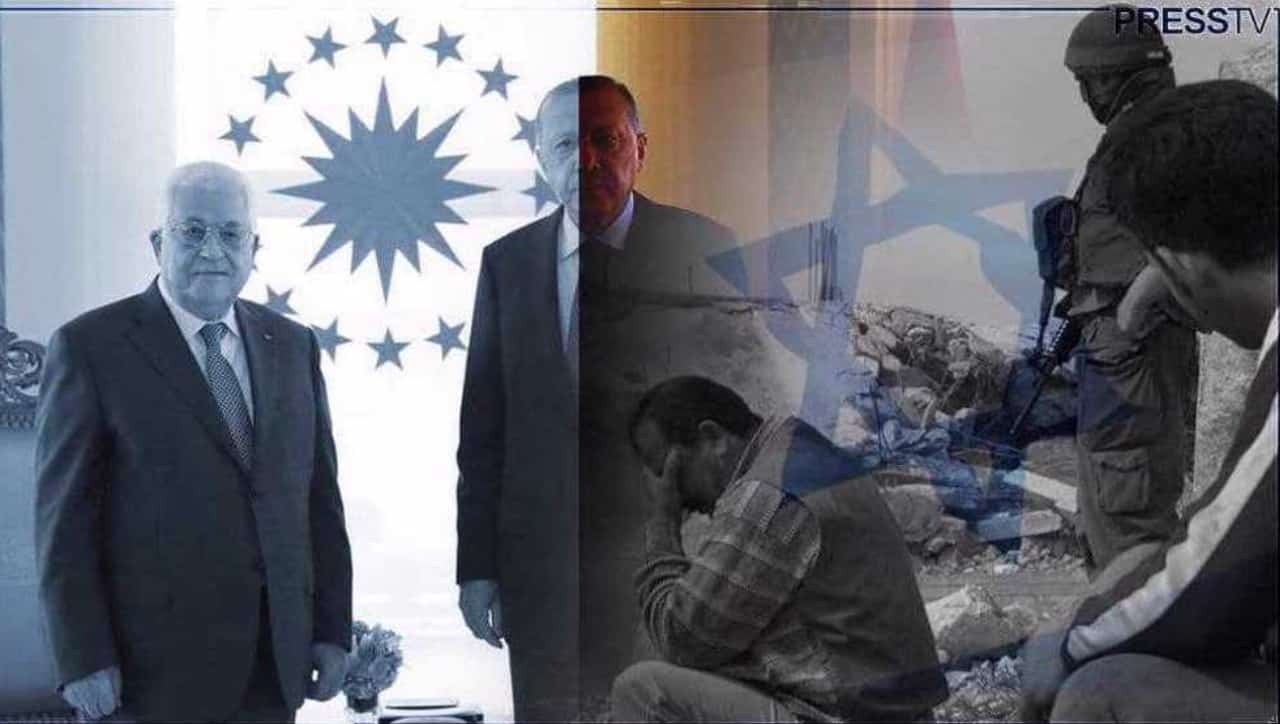 Last week, during a meeting between Turkish President Erdogan and Mahmoud Abbas, the Turkish leader said that his nation “would not remain silent about Israel’s atrocities in Palestine,” while adding that “peace and stability in the region would not be possible as long as the Israeli occupation and annexation continues.”

Press TV: Then, just two days ago, the Turkish president gave a warm phone call organized by Abbas to the new president of the Zionist entity. In the call, Erdogan reassured Issac Herzog that ties between the occupation and Turkey were of “great importance to security and stability in the Middle East.”

Erdogan’s actions always spoke counter to his bombastic words, but it has become even more difficult for the Turkish presidency to maintain his facade.

Acknowledging a “difference of opinion” in passing, Erdogan relegated the brutal ethnic cleansing and oppression of Palestinian people to a matter of surface-level views that could best be undermined for more important material objectives such as the “strong potential for cooperation” in fields like “energy, tourism and technology.”

For decades, Turkey had sought to strengthen ties with the Zionist entity, considered by the Occupation to be its closest Muslim country ally in the region. But the need to put up a pro-Palestinian facade to win support of Palestinians complicated Turkey’s full ascension to openly normalize ties with the Zionist entity in the past, most notably in the 2010 attack on the Turkish Mavi Marmara flotilla delivering aid to Gaza. In 2016, the Zionist entity and Turkey agreed to resume their ties, motivated by its regional ambitions on Syria and Iran on one hand, and economic opportunism on the other.

In exchange, Turkey agreed to drop criminal charges on Zionist officers implicated in the 2010  flotilla attack, and the entity agreed to pay $20 million in compensation to the families of those murdered. In addition, the appealing prospects of a natural gas pipeline that would run from Turkey to the Zionist entity was a further motivation for both parties to move forth with the reconciliation efforts. Natural gas was the Zionist entity’s top export to Turkey at $591 million in 2019.

The efforts at openly cementing ties became complicated following the 2017 Deal of the Century and 2018 Gazan Great Return March demonstrations, when, in the wake of the Occupation’s brutality against Palestinian demonstrators, Turkey recalled its ambassadors from the Zionist entity.

Turkey is struggling to maintain its role in Palestine amidst its regional aspirations, rebranding as a “mediator” to the so-called “Israeli-Palestinian conflict.” It is seeking to compete with the Arab Quartet as the regional counterpart to the International Quartet that designated the UN, Russia, United States, and European Union as international mediators of the “Israeli-Palestinian peace process.” Having diplomatically lost Palestine, the Turks are following in the tails of the Persian Gulf Arabs. With already established economic and tourist ties with one another, Turkey seeks to benefit from the over 500,000 “Israeli” tourists that visited in 2019, five times more than there were in 2010. Total trade, at $5.6 billion, has increased considerably from $3.4 billion in 2008.

Turkey and Qatar, who have in the past poised themselves as Hamas’s diplomatic arbitrators, are increasingly at odds with the Arab Quartet, which includes Egypt, Jordan, Saudi Arabia, and the UAE since the Saudi diplomatic crisis with Qatar began in 2017.

Turkey’s attacks against the US-backed Kurds in northeast Syria foreshadowed a further rift between Turkey and the incoming Biden administration. After sanctions were applied following its purchase of Russian S-400 missiles, perhaps Turkey sees opportunity in leveraging its reconciliation towards “Israel” in repairing relations with Washington.

Recently, Syria and Hamas restored ties lost to Hamas’s support for the Syrian opposition in 2011. As more evidence of Turkey’s irrelevance to Gaza and Hamas, in the aftermath of Operation Sword of al-Quds, it was Iran that Palestinian leaders thanked for their support.

Erdogan indicated in his phone call with Herzog that a commitment to a two-state solution in line with “UN resolutions” is effectively obsolete and rejected by all factions of the Gazan resistance, and that puts Erdogan more in line with the Oslo Agreement’s framework and the PA’s Mahmoud Abbas.

The Zionist entity and Turkey have also been drawn together in their support of the Syrian Takfiri groups such as the FSA, and in Azerbaijan against Armenia during the 2020 Nargano-Karabakh conflict.

Ankara’s balancing act of wanting to position itself as a neo-Ottoman regional power, and strategic ally of NATO, the EU, and the Zionist entity at the same time have not worked. It oscillates between sides, trying to play all, yet making no friends in the process. Turkey has experienced repeated denial of entry into the European Union, and failures in its attempts to cement regional influence through external proxy warfare in Syria, and Libya. Its relations with Russia were soured by Turkey’s support for Takfiri rebels in Syria and shooting of a Russian jet that passed its airspace in 2015.

To try to secure any regional leverage, Turkey’s open rapprochement with the Zionist entity represents the same aims- and opportunistic objectives- as the Arab quartet states. For both, it is a step of sacrificing principles and the Palestinian cause as an admission of defeat, the UAE and Saudi Arabia in Yemen and Turkey in Syria.