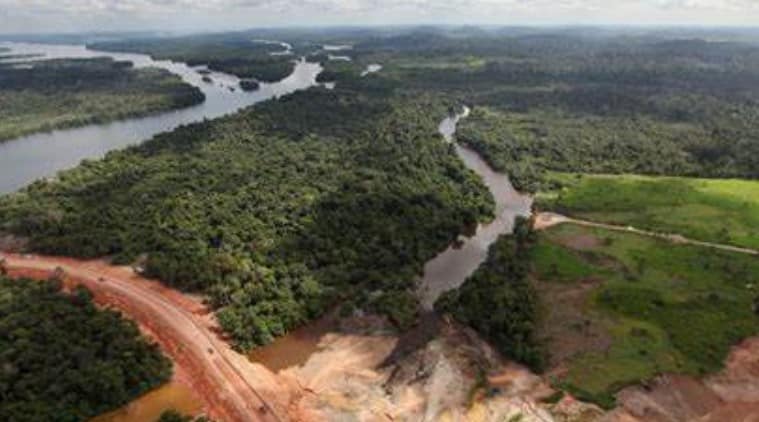 With some few exceptions that confirm the rule, the well-funded international environmentalist movement and its indigenist counterpart have nothing to do with the real environmental problems that affect the majority of the world’s population or with some legitimate concern about the world’s indigenous people.

Instead, both serve as insidious political instruments devised by oligarchic networks with roots in the Anglo-American Establishment. Their aim is hindering the developing countries’ legitimate claims to progress, in an effort to convince their populations that the planet’s “scarce” natural resources and its “fragile” environment could not allegedly support their plans to approach the living standards of the advanced nations. Unfortunately, this fallacy has blinded millions of well-intentioned people, specially youngsters, leading them to sincerely believe that humanity is now facing a non-existent “environmental apocalypse”. In fact, the greatest global threats come from the growing socio-economic inequalities, wealth concentration, and erosion of a positive view of the future.

The book “Green Mafia: environmentalism, new colonialism” is our contribution to help cleaning the waters, now available in e-book form in English, Spanish and Portuguese on Amazon.1

Its first edition titled in Portuguese “Green Mafia: environmentalism at the service of the World Government” was published in early 2001, when the Ibero-American Solidarity Movement (MSIa), an institution founded by the authors was being sued by the Brazilian chapter of the World Fund for Nature (WWF-Brazil), one of the main organizations that are part of what we call the “Green Mafia”. The book’s success rapidly converted it into a kind of best-seller among ordinary citizens and people from several sectors of the Brazilian society, intrigued by the intensity of international demonstrations about the alleged neglect of the environment attributed to Brazil. This led the WWF-Brazil into an ultimately failed attempt to include the book in the judicial process, with the aim of silencing its message.

In the book, there are ample evidence from public sources about: 1) the origins of international environmentalism, artificially created, nurtured, and lavishly financed by the Anglo-American Establishment as a political instrument against the expansion of industrialization considered the main vector of modernization of national economies, and the legitimate claim of developing countries to rise to living standards at least close to those achieved by the OECD nations; and 2) the onslaught of the international environmentalist movement against Brazil since the late 1980s, a country regarded as a prime target of such a misanthropic and anti-development strategy, due to its dimensions, the wealth of natural resources and political potential to serve as an example to other developing countries.

The same motives are behind the political manipulation of the protection of indigenous peoples, promoted and financed by the same oligarchic networks and implemented by international and national non-governmental organizations (NGOs), often operating in tandem with their environmental counterparts.

By the way, such a wealth of evidence constituted a crucial factor for the MSIa victory in the judicial claim filed by the WWF-Brazil, which occurred only in 2008, as reported in the final chapter of the book.

One of the first consequences of the book was the summoning of co-author Lorenzo Carrasco to testify at the Parliamentary Inquiry Commission of the Brazilian Federal Senate that investigated the political campaigns of some selected NGOs in the Brazilian Amazon in May 2001. Subsequently, Carrasco was summoned to two other parliamentary commissions, the 2015 Mato Grosso do Sul State Legislature inquiry about the actions of the Indigenous Missionary Council (CIMI), one of the leading Brazilian indigenist NGOs, and the 2016 Federal Chamber of Deputies inquiry about the National Indian Foundation (FUNAI), Brazil’s Federal Indian agency and then a stronghold of the indigenist agenda in the country.

In 2005, with eight editions sold out, the authors launched a new book with the Portuguese title “Green Mafia 2: environmentalism, new colonialism”, which largely repeated the success of the previous one, with over 11,000 copies sold in three editions. At the same time, the original book continued to demand new editions – there were 11 in total, totaling 20,000 copies. Finally, two new updated and revised editions were published in 2017 and 2019, raising the total number to over 23,000 copies sold.

In 2007, the first edition in Spanish was published in Mexico, combining parts of the two Portuguese books, which made it possible to expand the scope of the exposé of the environmentalist-indigenist agenda to a wider audience outside Brazil. In 2016, the second edition in this language was published in Argentina, with a third edition published in 2020.

The demand for an English edition has been felt for some time, with the necessary adjustments for a wider international audience, but the opportunity to launch it at  present time is particularly relevant. In particular, due to the fact that the Covid-19 pandemics is being seen by the international oligarchic Establishment as an unmissable opportunity to impose a reconfiguration of the global economy fully integrated with its plans to deepen the “globalization” under the so-called “Great Reset”, led by the uber-elitist World Economic Forum (WEF), whose “Green” component has been openly hailed by environmentalists all over the place.2

In fact, such an agenda was already underway in the last years with the intended “financialization” of the environmental issues on a worldwide scale, which links the development plans and aspirations and the productive activities of all countries to dubious criteria of “environmental protection” or “sustainability”, defined more with an alarmist perception of the environmental problems than by means of real concern for real environmental emergencies – lack of sanitation and water treatment infrastructure, inadequate garbage disposal, irregular occupation of hazardous areas and so on –, and the scientific evidence from the real world. This is the main cause of the present campaign against Brazil, due to the supposed threat of “devastation” of the Amazon Rainforest biome, in fact, one of the most preserved in the world.3

Likewise, other events reinforce the opportunity of an English edition, such as the aggressive uprising of the separatist movement of Mapuche indigenous organizations in Chile and Argentina,4 and the timely reaction of the Mexican government to the international environmentalist offensive against the Maya Train project, one of the largest infrastructure projects carried out in the country in decades.5 And we can also mention the ostensible intention of the North Atlantic Treaty Organization (NATO) to include the environmental agenda in its list of reasons for future military interventions,6 all the more relevant because the organization was one of the cradles of the international environmentalism, as the book describes.

This is a crucial moment in the history of the world civilization, and an understanding of such an insidious oligarchic agenda against the Nation-States and the legitimate aspirations of their societies for full development is most needed.

* The authors are founders and directors of the Rio de Janeiro-based Ibero-American Solidarity Movement (MSIa); their website is www.msiainforma.org, and they can be reached at [email protected].

3 Geraldo Luís Lino, “10 hard facts that everybody (including investors) should know about the Amazon Rainforest”, MSIa Informa, June 26, 2020, https://msiainforma.org/10-hard-facts-that-everybody-including-investors-should-know-about-the-amazon-rainforest/.