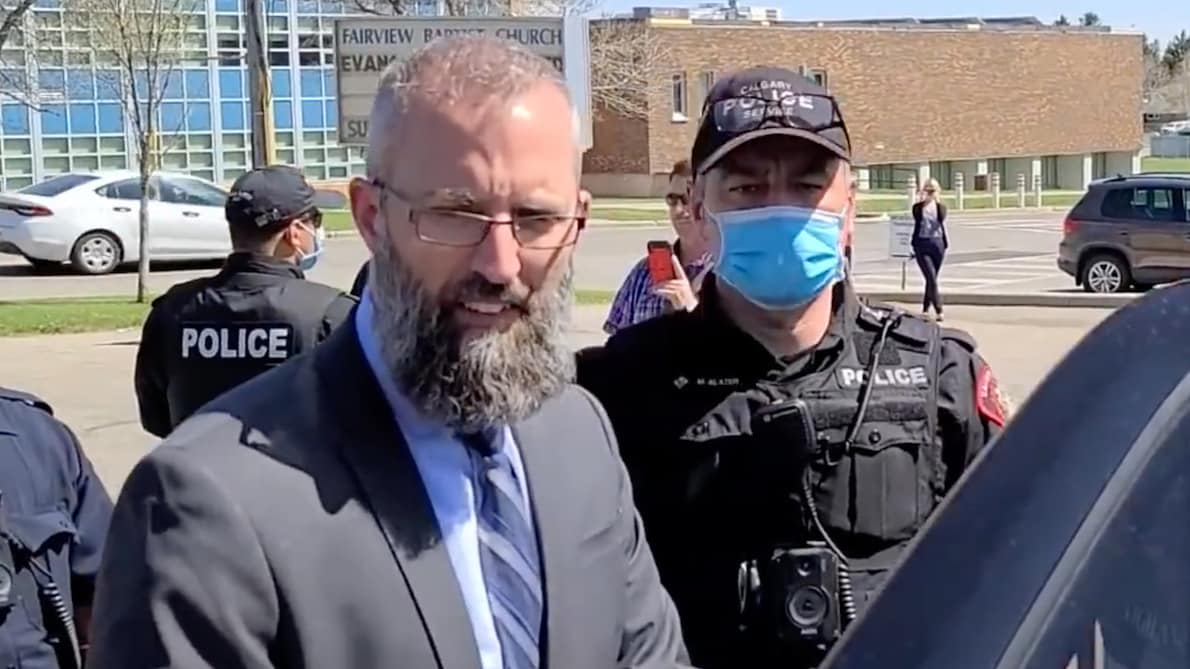 The news dates back weeks ago but had very little international prominence both in the mainstream media and in the counter-information media.

In the silence of the world in Canada, and more precisely in the western province of Alberta, a persecution of pastors is taking place similar to that in China, North Korea or Iran, where Christian religious can exercise their religious functions only in the manner imposed by the state.

In Beijing and in other cities of the People’s Republic of China, bishops and priests must be welcomed by the Chinese Communist Party in order to preach and organize Masses, which are sometimes canceled even during the most important religious holidays by decision of the local authority. They also persecuted Christian journalists who tried to shed light on the origins of the pandemic.

In Iran it is strictly forbidden to pray in public and if more people of different families are found in a house to carry out a Christian Mass or to pray on the Bible, the organizer can be arrested as happened several times to a Christian religious.

The ban on gatherings for religious functions in Canada, applied with extreme severity by the police, is creating the same climate of Nazi-Communist dictatorship in a Western country that declares itself a defender of human rights and claims to want to combat discrimination of all kinds but in reality, like the US, it merely supports the LGBT Lobby.

It should not be forgotten that in Canada there is the National Microbiology Laboratory in Winnipeg (Manitoba), one of the international research centers that has conducted dangerous experiments on the SARS (2003) and MERS (2012) viruses infected with HIV from which it is suspected. SARS-Cov-2 was born as a recombinant. The studies were conducted by the prominent director of the biological laboratory Frank Plummer, who mysteriously died before completing them.

After 2½ weeks, pastor Tim Stephens went free on Thursday afternoon (July, 1). Officials in Alberta, Canada, also reopened his locked-up church to its congregation. Police arrested Stephens on June 14 for not enforcing pandemic health protocols at an outdoor worship service. Authorities had changed the locks at his church earlier in June. He must return to court on July 14 for a hearing on his alleged health order violations.

Stephens had refused to sign a bail agreement requiring him to follow the health orders in place at the time. On July 1, Canada Day, Alberta moved to the final stage of its reopening plan and rescinded nearly all pandemic restrictions. Stephens then signed an agreement to observe the new health orders since none would limit his church activity. On a Thursday podcast, Stephens’ brother said the pastor could have legal recourse for wrongful imprisonment.

Below there’s is the story of the arrested pastor told in every detail by the Catholic site LifeSiteNews.

By Anthony Murdoch
First posted by LifeSiteNews on June 15, 2021

CALGARY, Alberta, – Christian pastor Tim Stephens was arrested a second time by members of the Calgary Police Service yesterday for allegedly breaking COVID-19 health rules. The pastors’ kids were in tears as they witnessed their father being hauled away by cops from their home. Previously, police had searched for and discovered the location of Stephens’ underground church service last Sunday by using a helicopter.

Stephens is a father of eight and serves as the pastor of Fairview Baptist Church located in Calgary, Alberta. A video of the arrest posted by Rebel News reporter Adam Soos shows Stephens kids crying while saying “goodbye daddy,” as he was placed inside a police car.

Stephens’ wife Raquel told police officers that “no other jurisdiction is imprisoning pastors for breaking health orders in Canada, only in Alberta.” The officer responded, “I’m not going to speak to that, okay,” adding, “I would say continue the course you are continuing on, push further ahead, push harder if you need to.” Raquel asked, “How much harder can we push here? … You want to arrest me and take me away from [my kids], too?” The officer said, “I have no reason to arrest you, alright?”

Raquel tweeted that her husband is to remain behind bars until June 28, as he refused to agree to bail conditions set out by a Justice of the Peace. “Tim was arrested again for holding an outdoor service in violation of Alberta’s health orders. He went before a Justice of the Peace this evening and refused the bail condition so he’ll remain in custody until his next court date June 28,” wrote Raquel.

Raquel’s asked for prayers so that her husband would soon be released. “We are shaken, but our faith is not. We are sorrowful, but always rejoicing. As I prayed with the saints tonight, I couldn’t help but sense their joy at this opportunity to proclaim the excellencies of our Lord Jesus. In God’s providence, Tim’s imprisonment will strengthen us in the faith and embolden us to love and obey Christ, no matter the cost,” wrote Raquel.

“Pray for: Tim to stand firm; that he would meditate on the love of Christ and his sacrifice for sinners; that he would be comforted in his chains; Pray for his release.”

In a statement posted on Facebook, Calgary police said Stephens was arrested for “violating Section 127 of the Criminal Code for failure to comply with a court order.”

The new charges follow a service Stephens held on June 6, according to police in the video. Stephens had his church doors shut on June 5, and as a result took his services underground.

On Monday afternoon, Stephens took to Twitter to state that he was tipped off police were on their way to arrest him. “I just got a tip that the police may be on their way to arrest me. Why? I continue to lead our church to worship Jesus as Lord over every earthly power. More to come … Pray brothers and sisters. Stand firm, keep the faith,” tweeted Stephens.

Stephens’ first arrest on May 16 also occurred in front of his family, and came about after he held an indoor church service that went against the provincial government’s rules.

He was released after a judge agreed to let him out of jail as long as was abiding by a now-amended May 6 injunction order issued by Alberta Health Services (AHS).

In a statement posted on June 5, AHS said Fairview Baptist’s closure was “necessary” because Stephens “has continued to disregard public health measures required by law under Order of the Chief Medical Officer of Health (CMOH) for the protection of the public.”

Alberta is the only province in Canada in which pastors have been jailed for defying COVID-19 health rules. Stephens was the third Canadian pastor to be jailed, following Artur Pawlowski and James Coates.

Stephens’ arrest comes at a time when Alberta, under its Catholic Premier Jason Kenney, is poised to remove all COVID-19 restrictions within a matter of weeks. In fact, Kenney himself was caught violating his own rules by participating in a patio dinner with several other guests on the rooftop of a government building.