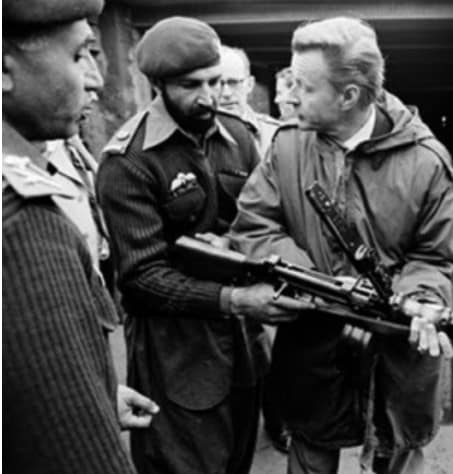 Two weeks ago, CIA Director Leon Panetta told the press the CIA had not been able to positively confirm any specific information on Osama bin Laden since “late 2000.”    Interviews with high ranking military and intelligence officials, some at the highest levels, have confirmed that all evidence lends toward Osama bin Laden’s death in December 2001.  Yet transcripts of translated audio and video tapes, albeit widely disputed, are continually released by a news agency tied to Israeli intelligence services.

The transcripts of the last proven bin Laden interview, translated by the CIA, are compared to similar translations of a 2007 “broadcast” said to be by Osama bin Laden.  Both are excerpted for length but not content.  Striking differences between the two “bin Ladens” is obvious.  In 2007, in a lengthy admonition, no mention of Israel is made whatsoever, nor of Palestine.  In fact, the bin Laden of 2007 seems to be totally oblivious of Israel.  We will begin with the CIA document, one that directly disputes claims made by the media for years.  We thank the Central Intelligence Agency for making this document available.

With dozens of films, videos and recordings, all claiming Osama bin Laden has taken credit for 9/11 and other terrorist attacks against America, Britain, Spain and other nations, the possession of the only official translation of the real Osama bin Laden is vital.  What you are going to be reading is both astounding and frightening.

FOR OFFICIAL USE ONLY

FOR OFFICIAL USE ONLY     END OF OFFICIAL TRANSCRIPT

Bin Laden is clear on a number of issues.  His overall belief is that the American people are being victimized and enslaved by powerful interests allied with Zionism and that the people of the United States are not to be considered targets for reprisal.  The full length version includes outlines for economic reprisals and boycotts, rather than terrorism or Jihad.  Bin Ladens admonition of the western media as purveyors of terrorism through propaganda seem to be proven out in the text of our next transcript, one reported extensively by the media though never verified other than by private sources tied to Israel.  If the world’s top intelligence agencies are correct, Osama bin Laden had been dead for nearly six years when the following statements were credited to him:

(Editor’s note:  Official transcripts indicate that these statements are inconsistent with Osama bin Laden.  Osama bin Laden has never mentioned “holocaust” but has only criticized the use of it as an excuse used by Israel for illegal acts through manipulation and guilt.)

(Editor’s note:  Official transcripts indicate that these statements are inconsistent with Osama bin Laden.  Bin Laden refers to the media as terrorists, not “misrepresenting Islam.”)

(Editor’s note:  Official transcripts indicate that these statements are inconsistent with Osama bin Laden.  Bin Laden’s long stated belief is that Paul Wolfowitz, acting as an Israeli agent, was responsible for orchestration the deception campaign leading to the 2003 invasion of Iraq.)

(Editor’s note:  The recurrent theme of the Vietnam War leading to the Kennedy assassinations, the Garrison/JFK/Oliver Stone theme, simply doesn’t hold water.  However, there is a rationale for mentioning the Kennedy assassination “out of the blue.”  The release of letters between Kennedy and Israel indicate an extremely heated dispute over the use of the Dimona reactor for the manufacture of nuclear weapons by Israel.  Kennedy demanded an immediate inspection.  This would have left Israel without a nuclear arsenal.  Kennedy was murdered and Lyndon Johnson, at the time having an affair with a Mossad/Irgun operative, took his place.)

(Editor’s note:  Official transcripts indicate that these statements are inconsistent with Osama bin Laden.  Osama bin Laden has never blamed US corporations for any of these issues, a theory made popular by Noam Chomsky. Bin Laden:   “It is simply that the American people are themselves the slaves of the Jews and are forced to live according to the principles and laws laid by them.”)

(Editor’s note:  Official transcripts indicate that these statements are inconsistent with Osama bin Laden. More talk of  “corporations” when bin Laden would have said Israel.)

(Editor’s note:  Official transcripts indicate that these statements are inconsistent with Osama bin Laden.   Does anyone believe Bin Laden would have left Netanyahu off this list?  Who would have done that?)

(Editor’s note: “It is simply that the American people are themselves the slaves of the Jews and are forced to live according to the principles and laws laid by them.”)

In thousands of words, calling for Jihad, promoting violence and destruction, the 2007 version of Osama bin Laden never mentions the word Israel once.

Particular effort is made to omit mention of Israel’s influence on the US, their control of the media or references to Christian followers of Zionism as “crusaders” one of bin Ladens most used themes.  In fact, his only mention of the word “Jew” at all was tied to an obscure biblical reference.

If the endless statements made by political and military leaders about Osama bin Laden are not based on any evidence, as seems to be the case, is it possible that bin Laden’s transcript is not only an accurate portrayal of his beliefs, as translated by the Central Intelligence Agency but, in fact, an extremely accurate prediction of what has come to pass?  In September of 2001, there was no opium production in Afghanistan.

Now Afghanistan produces 85% of the world’s supply of that infamous substance, a supply defended by US Special Envoy Richard Holbrooke as “vital” to the economic well being of Afghanistan’s farmers.

How many times in the past six years has Israel demonstrated its power over the United States, its primary benefactor?  Who has that kind of power and why has only Osama bin Laden pointed it out, a fact that the CIA had sought to classify and the media has chosen to suppress.