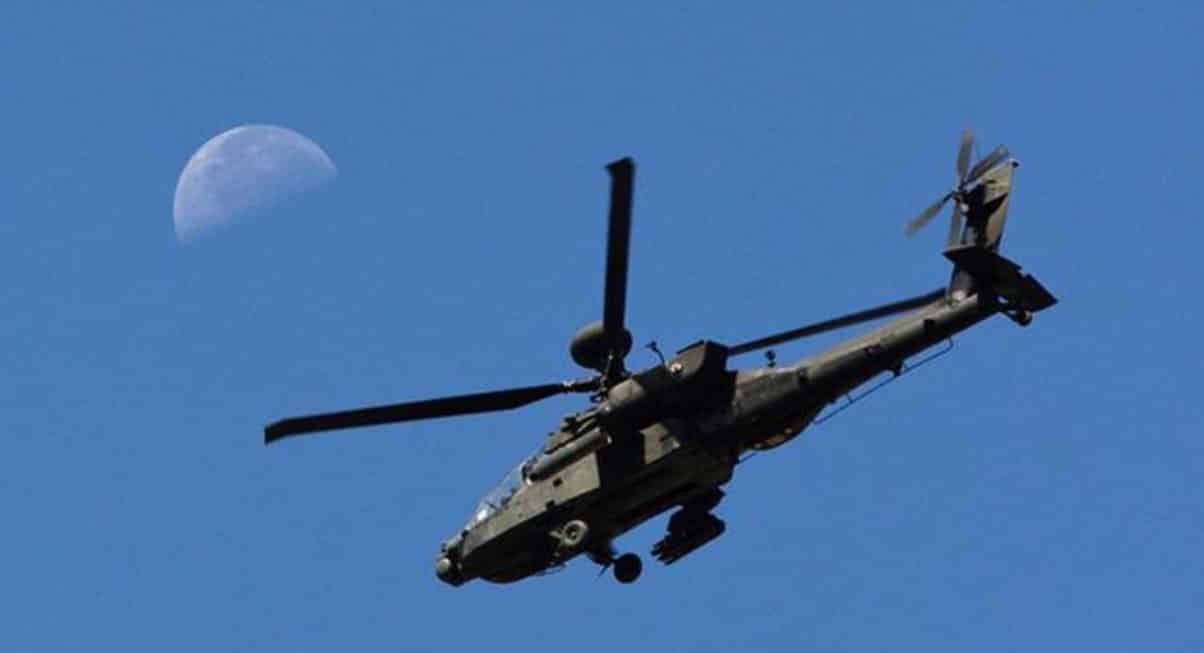 A leader of the Iraqi anti-terror Popular Mobilization Units (PMU), better known as Hashd al-Sha’ab, says thermal cameras installed in the country’s central province of Salahuddin have recorded US military helicopters transferring Daesh terrorists to various locations across the country.

Press TV: “The United States is not serious about withdrawing its troops from Iraq. The presence of US forces shows that previous statements made by Iraqi authorities and their American counterparts are false and misleading,” Qassem al-Kuraiti told Arabic-language al-Ahad television network in an exclusive interview on Saturday.

He added, “Thermal cameras in Salahuddin have captured how Daesh elements are being transferred across Iraq by US choppers.”

Kuraiti touched on Foreign Minister Fuad Hussein’s recent statements about the need for US forces in Iraq, noting that it is up to the Iraqi nation to decide whether American troops should stay or be expelled.

Iraqi resistance lambasts FM’s remarks on need for US troops

“Iraq does not need the presence of foreign forces on its soil. Security forces and Hashd al-Sha’abi fighters are able to protect the country,” the PMU leader emphasized.

American daily newspaper The New York Times reported on Saturday that the US military presence in Iraq is not “expected to change” despite Baghdad’s insistence on pulling out all American troops from the country.

The report said the Pentagon has no intention of pulling out any of the 2,500 US troops stationed in Iraq and aims to simply rename on paper the combat role given to the soldiers to logistics specialists, advisers, trainers and the likes.

Iraq’s Prime Minister Mustafa al-Kadhimi has headed to Washington and is scheduled to hold talks with US President Joe Biden on Monday to discuss “the strategic partnership between the United States and Iraq”.

He had told Iraqi media that his visit to Washington would “put an end to the presence of combat forces” in Iraq.

According to the NYT report, Pentagon and other administration officials say they will achieve this by removing a small but unspecified number of the 2,500 American personnel in Iraq, and by reclassifying on paper the roles of other forces.

“Mr. al-Kadhimi will have a political trophy to take home to satisfy anti-American factions in Iraq and the US military presence will remain,” the report added.

“What appears to be a set piece of diplomatic theater is the latest effort by Mr. al-Kadhimi to tread between the needs and demands of Iraq’s two closest allies, the United States and Iran.”

A senior US official familiar with ongoing discussions with Iraq told the NYT, “There will be no US military forces in a combat role by the end of the year. We anticipate some force adjustments in line with that commitment.”

Mohammad al-Rubai’e, a political spokesman for the Asa’ib Ahl al-Haq movement, a subdivision of Hashd al-Sha’abi, denounced the act of changing the name of US occupation forces in Iraq.

“Changing their name from combat forces to trainers and advisers — we consider it as an attempt at deception,” he said.

Iraq’s prime minister says there is no need for the presence of foreign combat forces on the Iraqi soil.

Anti-US sentiment has been growing in Iraq since last year’s assassination of Abu Mahdi al-Muhandis, the deputy head of the Popular Mobilization Units, along with the region’s legendary anti-terror commander General Qassem Soleimani in Baghdad.

They were targeted along with their companions on January 3, 2020 in a terror drone strike authorized by former US president Donald Trump near Baghdad International Airport.

Two days after the attack, Iraqi lawmakers approved a bill that requires the government to end the presence of all foreign military forces led by the US.

Back on July 10, chairman of the Iraqi anti-terror Hashd al-Sha’abi forces described his fellow fighters as the main guarantor of security and stability in the Arab country, emphasizing that the combatants fully support Iraq’s army and security forces in their battle against Daesh remnants.

“Iraqis defeated the enemies and shattered their invincibility myth through the liberation of Mosul,” al-Maalomah news agency quoted Faleh al-Fayadh as saying in a statement on the fourth anniversary of the strategic city’s liberation from Daesh extremists.

Resistance has decided to expel US forces, says Iraq’s Asa’ib

An Iraqi resistance movement says the government is not entitled to prolong the “unconstitutional” presence of US forces in Iraq.

Hashd al-Sh’abai fighters have played a major role in the liberation of Daesh-held areas to the south, northeast and north of Baghdad, ever since the terrorists launched an offensive in the country in June 2014.

The Iraqi parliament in November 2016 approved a law giving full legal status to the fighters. It recognized the PMU as part of the national armed forces, placed the forces under the command of the prime minister, and granted them the right to receive salaries and pensions like the regular army and police forces.